A Landscape Architect friend of mine in the UK sells root barriers online among scads of other things.  Ofer reminded me recently of something I had once taken huge care to deal with, back when I was working in the close confines of cities and suburban commercial projects. These projects were all just rife with restricted spaces and gardens over underground parking structures and they all found some relief with this new great product: Root Barriers. I recall using some of the very first large plastic and very strong root barriers in Monterey, California, in a new parking lot hard by the Monterey Aquarium. This was the first of what proved to be numerous applications of this handy and extremely effective material.

Root barriers are used to contain the spread of tree and shrub roots in order to protect other facets of a landscape from heaving and losing integrity. Easily-expandable large sheets of durable plastic now encircle the roots of trees up to 6 feet in depth, forcing the roots ever-downward in their search for water and feeding.

Root Barriers have only been developed formally since 1975. Obviously, efforts to control root growth have always been born closely in mind – all sorts of applications and efforts in the past have included concrete barriers/planters which we poured-in-place as well steel barriers and other efforts, typically always fighting the imperial instincts of expanding nature. It took the wonders of plastic to make this entire new field a more amenable and far easier task for installers and planners.

Yet, finding ways to combat something extraordinarily prevalent took more time than one might think. It has definitely been easy seeing the reasons for them. We all desired a product which could orient roots less invasive to the sides where the more obvious ravages appear and downwards to a “safer” a layer of soil: 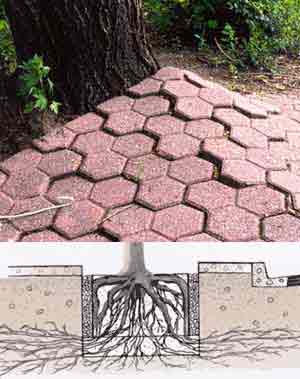 We arrived at something like the above as a desired direction of root growth. We have since found that it is entirely possible to get there using the simplest of devices – a plastic panel, attachable to the next or simply rolled out and pre-measured – expandable and wrapped a reasonable distance around the tree or plant. Thus, not only does the barrier reduce the damage from expanding roots, it also has a lot to do with the emerging shape of the young tree above the ground. A result usually results giving a more columnar tree – at least until the tree’s roots expand and find what they need down below the barrier.

Modern structures have demanded even more attention to this detail as we continue to lay on the asphalt to “Paradise”, as Joni Mitchell so eloquently sang it, providing enormous parking facilities to accommodate our love affair with cars. Planting strips abounded in the later part of the 20th Century. In an effort to make these generally-abhorrent facilities more appealing to the eye, landscape designers decided a nice result would be to arrange thin planting beds between aisles. Demarking separate parking areas on the plane of a parking lot led to planting trees in abundance for various reasons – perhaps the most important of which is their thin profile near the parking spaces themselves which can hopefully better avoid bumpers and parking accidents. Shrubbery can fare poorly indeed in these situations. Let’s face it – this parking area is better than the one following: 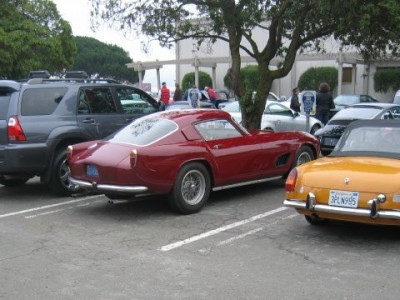 Not too pretty, is it – the one below, I mean? Well, at least they don’t have to worry about maintenance! The below is what I like to refer to as a gardener-free Zone. 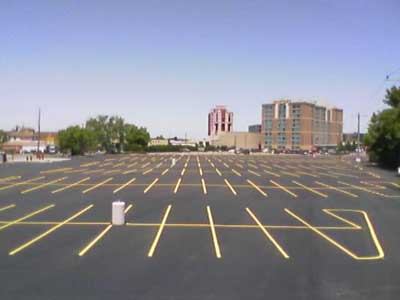 So root barriers allow us to implement a greener environment, sans the continual worries of upsetting the structure itself. Nor is it merely parking lots which are affected. There are abundant situations where reorienting roots to a lower water field are applicable.  Retaining walls come foremost to mind, but any patio or residential or even general pedestrian thru-way applies here as well. Needless to say, roads, curbs and the various long term upsets of planting too closely to buildings and flat structures get some much needed relief, nearly no matter which trees are decided on. I have even seen Sequoia’s in the West treated this way to great effect, negating the inevitability of this, at least for a few years:

History: Once these controlling mechanisms became wider known, suddenly a raft of possible applications presented themselves. Suddenly bamboo could once again be specified for landscapes. Other ‘rhizoming’ plantings which are voracious and famous for it also became possibilities. It honestly did open up some real new and interesting possibilities. It’s truly amazing what a strip of plastic can do.

Plumbing: And not just plumbing, either, but all features of house supply of services, from water and waste to electrical and cable can now be protected by the insertion of such a simple and elegant solution at the face of these mechanisms, or just around the potential invaders. By directing the roots downwards, suddenly the invasions of Birch, Willow and other water-seeking suckers and trees becomes moot.

The benefits of root barriers are a relatively new technology. It’s a technology whose time has definitely come. Once again, my friend Ofer has a bit of information and a few interesting quotes in his website as well as a plethora of good and useful products. He designs and installs gardens and landscapes as well in the UK and is trying to get a bit of income for his growing brood over there in England Land. Here is his site, again, check him out:

12 thoughts on “Root Barriers: My Buddy Ofer and Technology”