Not of China, although that is sure a great wall.

(I have adapted an older post into what follows in a bit more detail. Please note that one can click on the pictures themselves to enlarge them.)

No, these walls are of a smaller niche, involving landscaping and the pressing need at times to fit structures into our dwindling resources of available land. More and more impossible building sites are becoming completely practical as we erect structures which can hold back and cut into slopes, rendering them usable. They result in a raised area, flat and of planes with which we can live.

Some most unusual solutions have arrived which now not only perform the task of extending a building’s footprint but which also extend or reduce an area to be landscaped. They can also end up looking fascinating. This stacked concrete block wall at the University of Oregon’s Athletic Complex is rather ultra-modern in that it replicates the roughness of natural rock in purposefully random ways and yet is engineered on the back side completely perfectly. This look is a bit bizarre, I admit fully, but I enjoy the effort, if nothing else.

The changing levels of a landscape provide an interesting counterpart to the more mundane roads and walks of our lives, offering visual interest as well as often featuring the walls themselves as art. Traditional dry-stacked native rock walls are a technology as old as society itself. From prehistory until now, gorgeous examples of this technological social skill exist on every continent. Modern landscapers have resurrected this low-tech formula into some really beautiful wall series. Here’s one I took part in. It’s purpose, too, was to extend the landscape out from the home level and then drop the 3-4 feet to another flat plane of lawn and green, lush color in a warm contrast of natural textures. 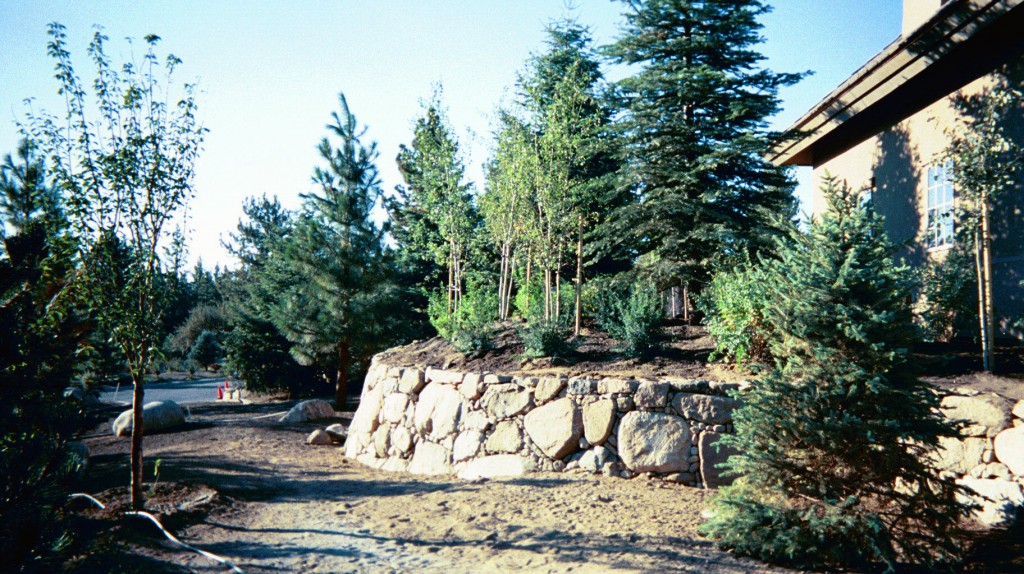 Other walls made of rock have similar purposes in function but often offer almost breathtaking purely artistic license………hilariously and rewarding tweaks on the theme. Michael Eckerman of Santa Cruz, California provides scintillating river and coastal rock edifices of breathtaking form and function. A true stone mason unlike myself, Michael has pioneered his own art form in stone in ways which we can only admire. 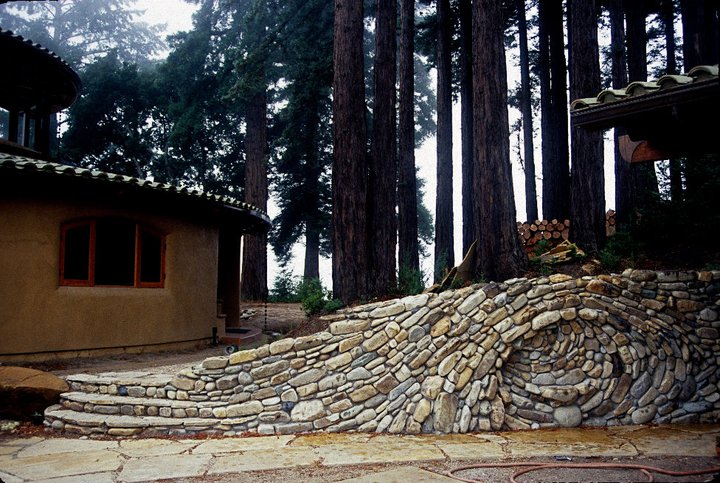 Michael approaches his walls with a deepest love for the Ocean in mind, being a Santa Cruz surfer boy at heart. His sense of crashing waves and moving surf is evinced in all his work from a certain period and thence morphed into the concept of motion in general, later on. But I can hear the ocean in his retaining walls built in the hills surrounding Santz Cruz! 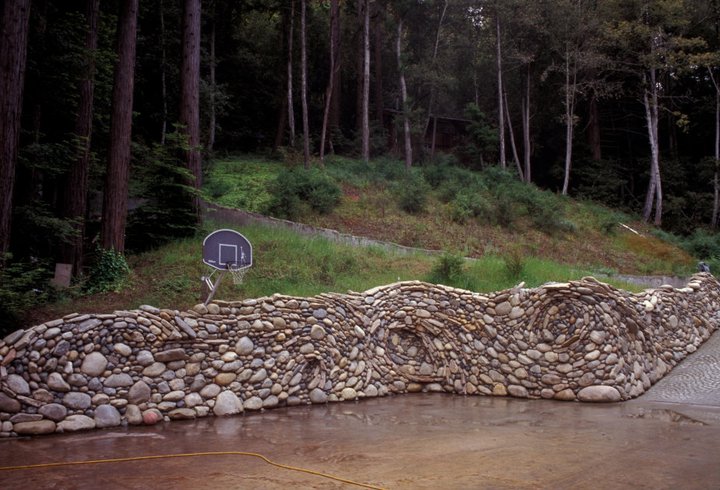 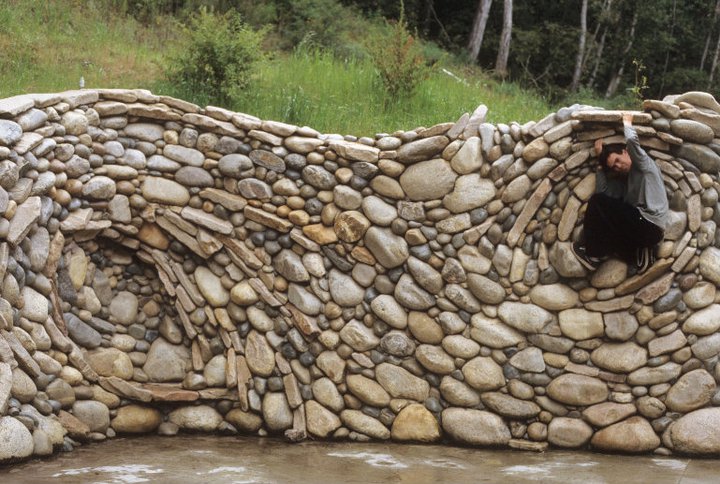 From the sublime to the more normal, we visit a modern development in wall-building which has made life yet easier by substantial degrees. The preformed cement wall block has been engineered to perform incredible feats of retention and grade changing. It is somewhat “plastic” in its ability to meander along the lines of whimsy as well, providing landscapers wonderful opportunities to soften lines and to create more pleasing environments. Below are a couple of angles on a Reno project we did, from the start to a more finished look. 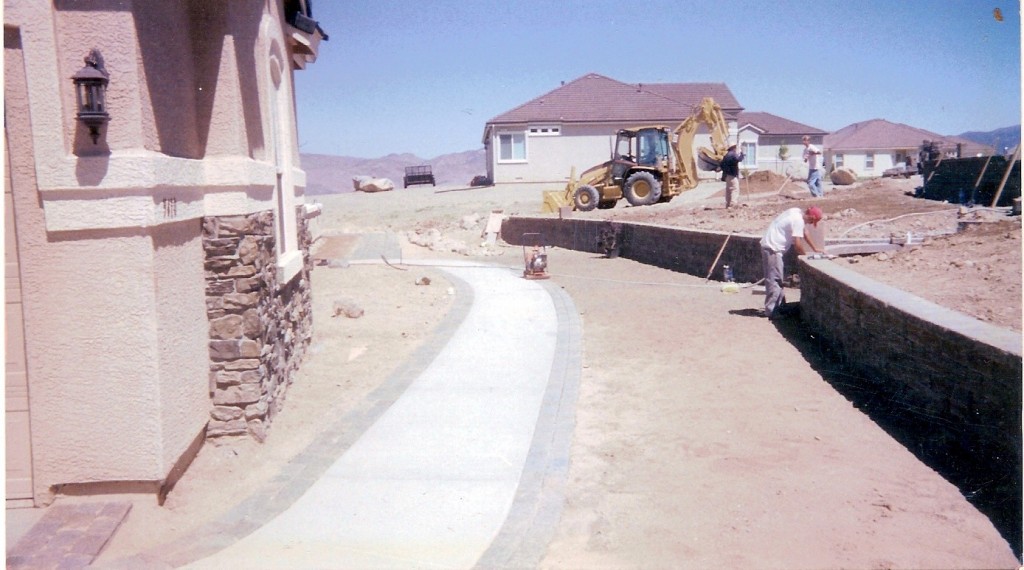 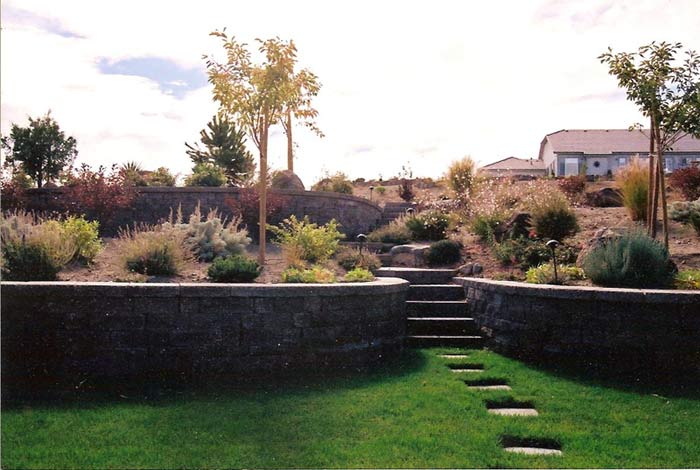 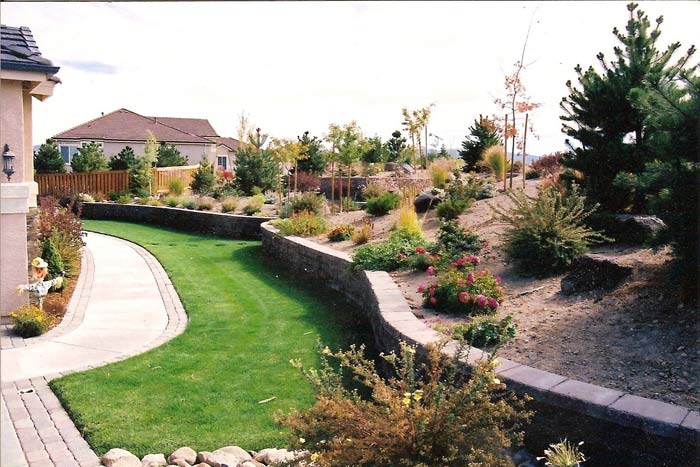 Other cement wall edifices performed other duties, although grade changes were always a primary goal. On the one below, we look down a wall put in more for security purposes than the art. A look at the precipice leading away from the landscape shows its functional safety feature. 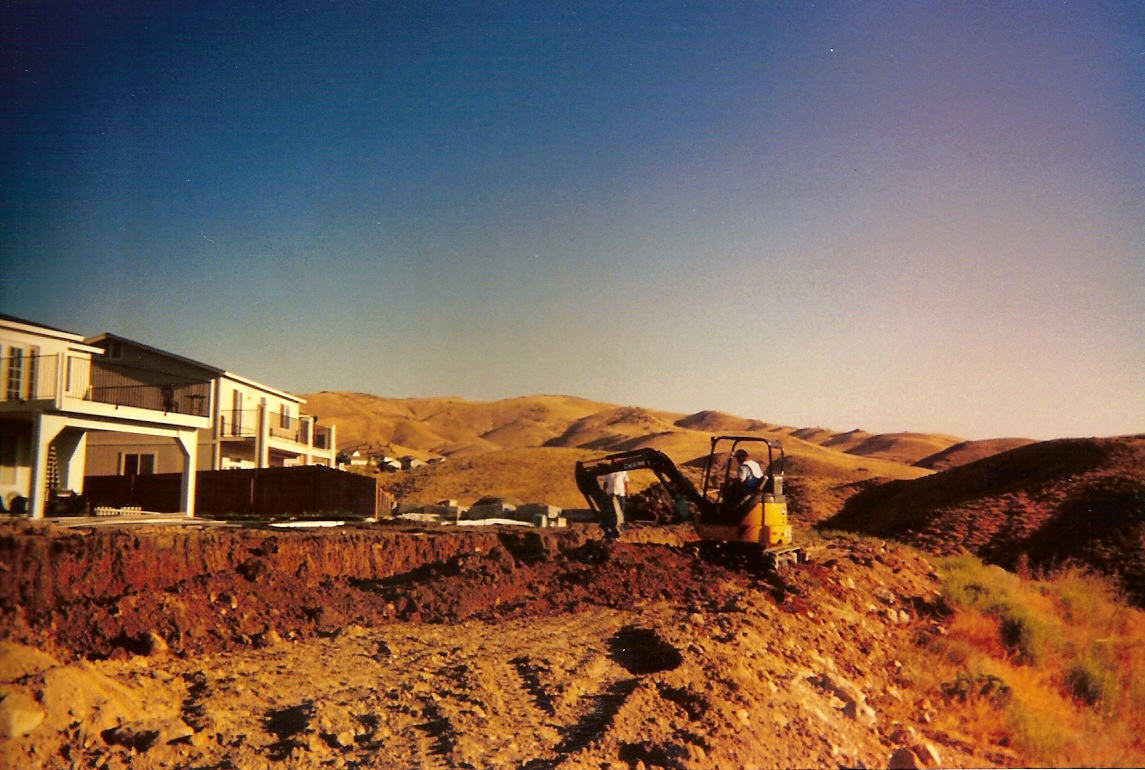 Here is the eventual disposition of that dirt above…………. 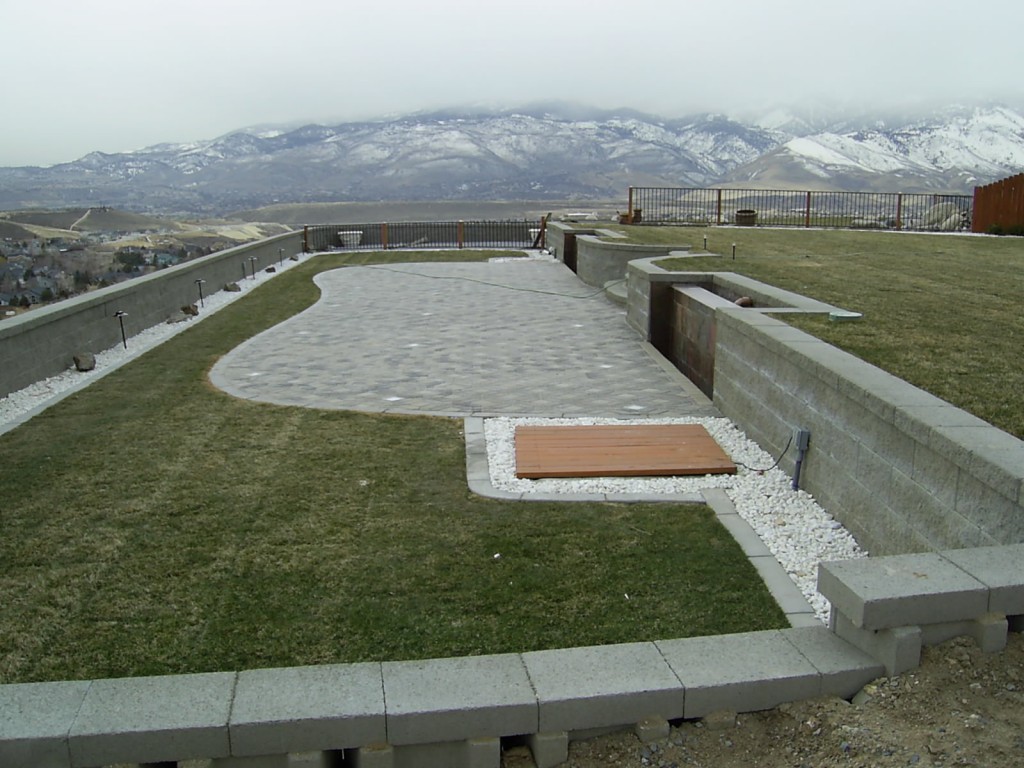 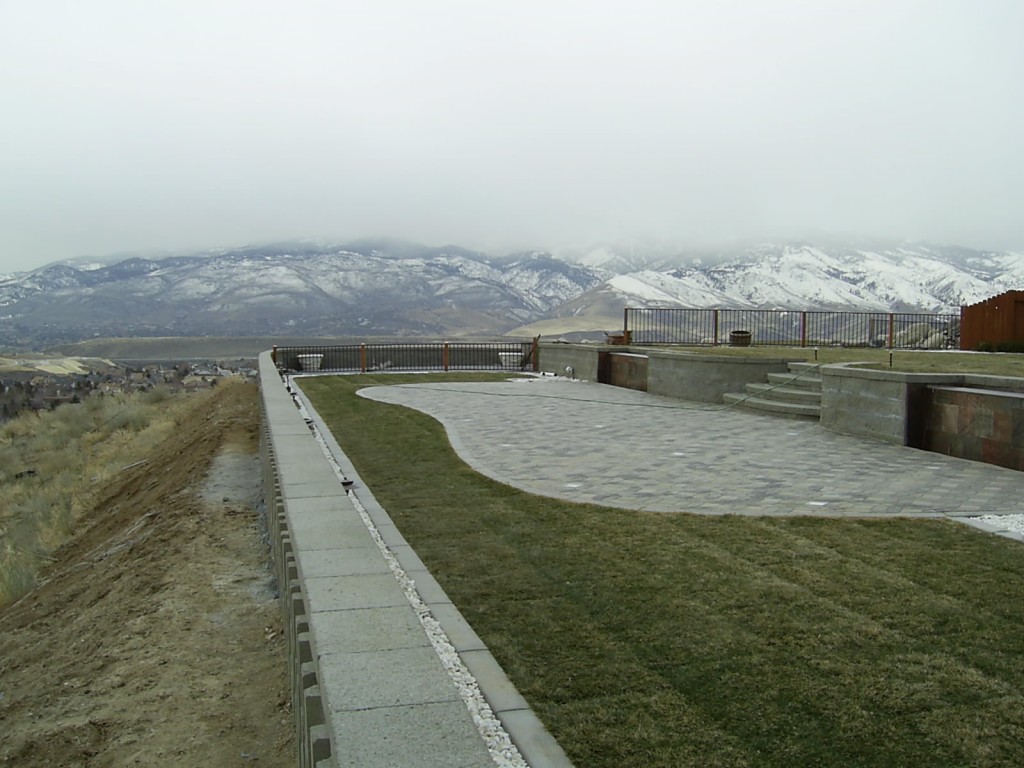 This one features 2 Falling Water fountains embedded in the forward wall. This is a Winter Time look back at the fountain as we completed the project. The owner was delighted and he has re-landscaped nearly everything from these basic beginnings. The water is running here in exactly the “sheet” we expected and designed. This was a fascinating gig. 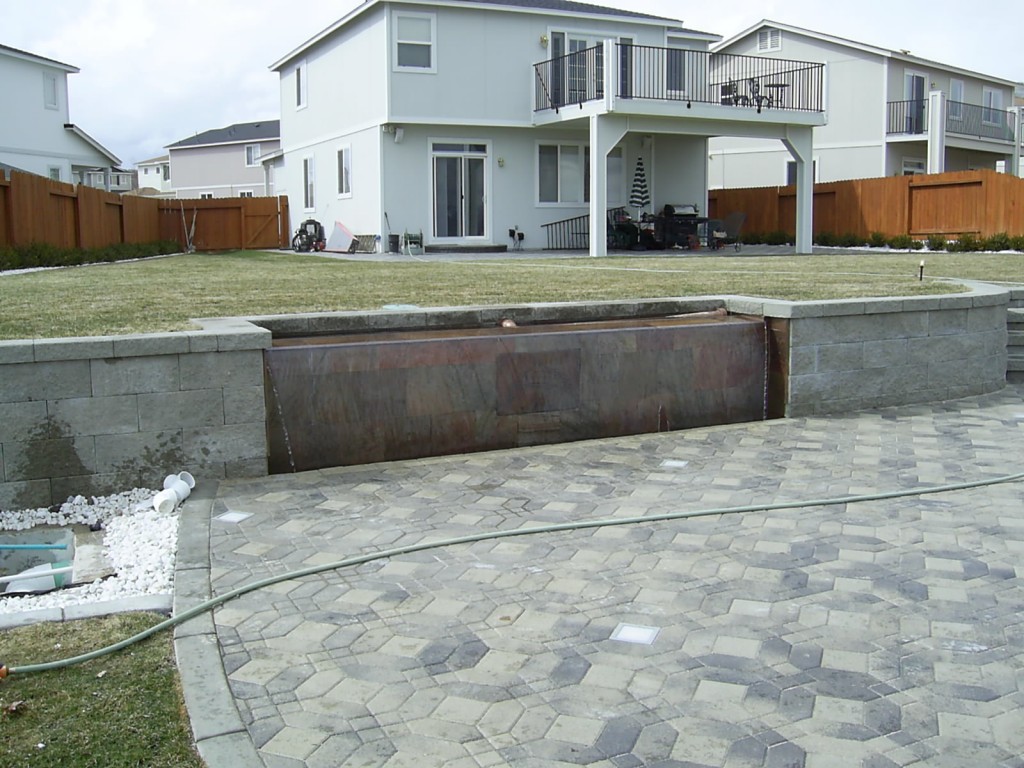 Meanwhile, some “walls” can show an investment in the motion and kinetic energy of water, while still retaining the earth behind…….. 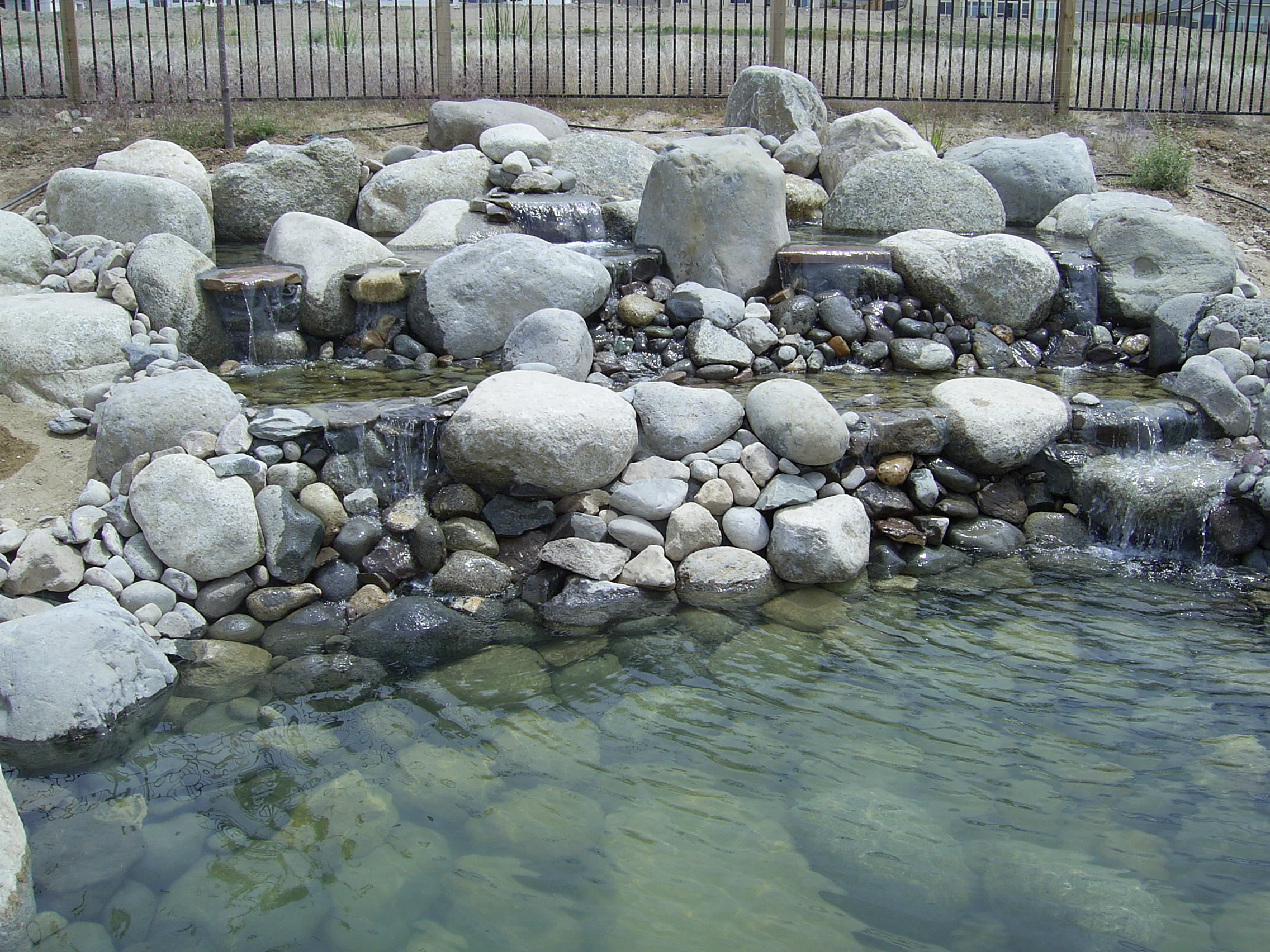 For the longest while, in the early 80s in Vancouver, we were building walls almost exclusively of Railroad Ties – huge, 150 pound creosote-soaked uglies 8 feet long which made the most incredibly sturdy walls of the era. One had to drill holes to pound in the 1/2″ rebar to connect these edifices, complete with “dead men” sent perpendicularly back into the soil in a Tee, for anchoring. But one could also be creative, even here. Note the sets of stairs in the distance in this picture, a system of walls a quarter mile long on two-and three-levels. The use of angled off-shoots to the walls provided an architectural joy for the builders and made them as interesting as they became later as the plantings overtook them. 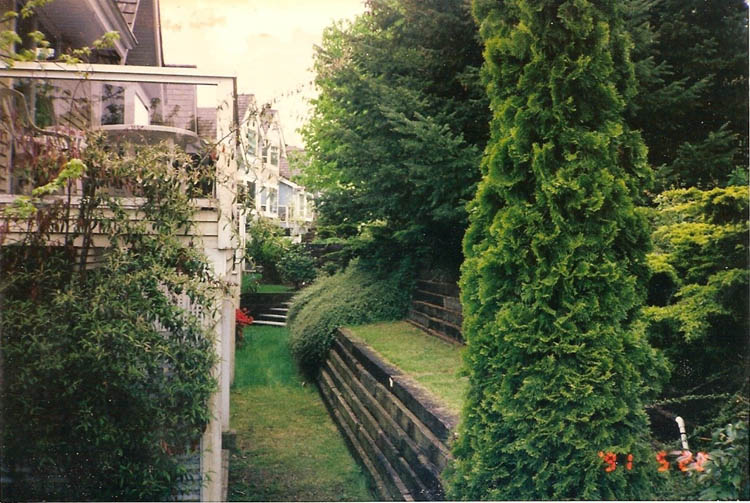 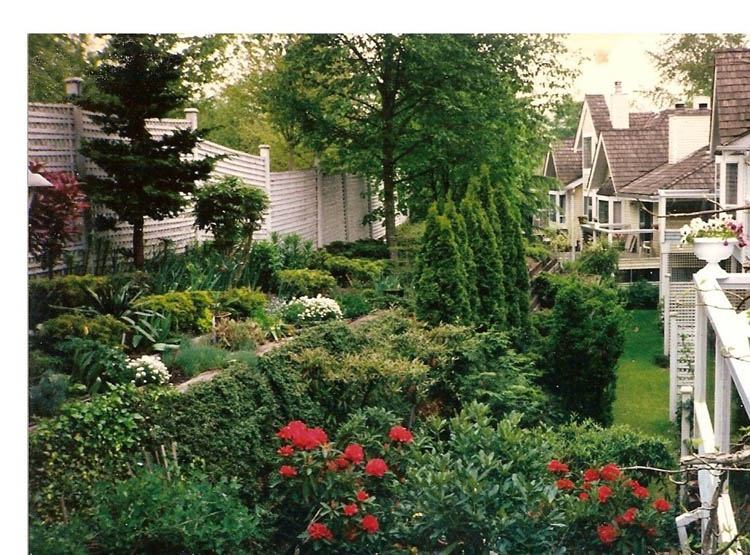 Wall work has always been challenging and somewhat fun, actually. As permanent structures, their solidity and form provided ample rewards for those who made them the right way. 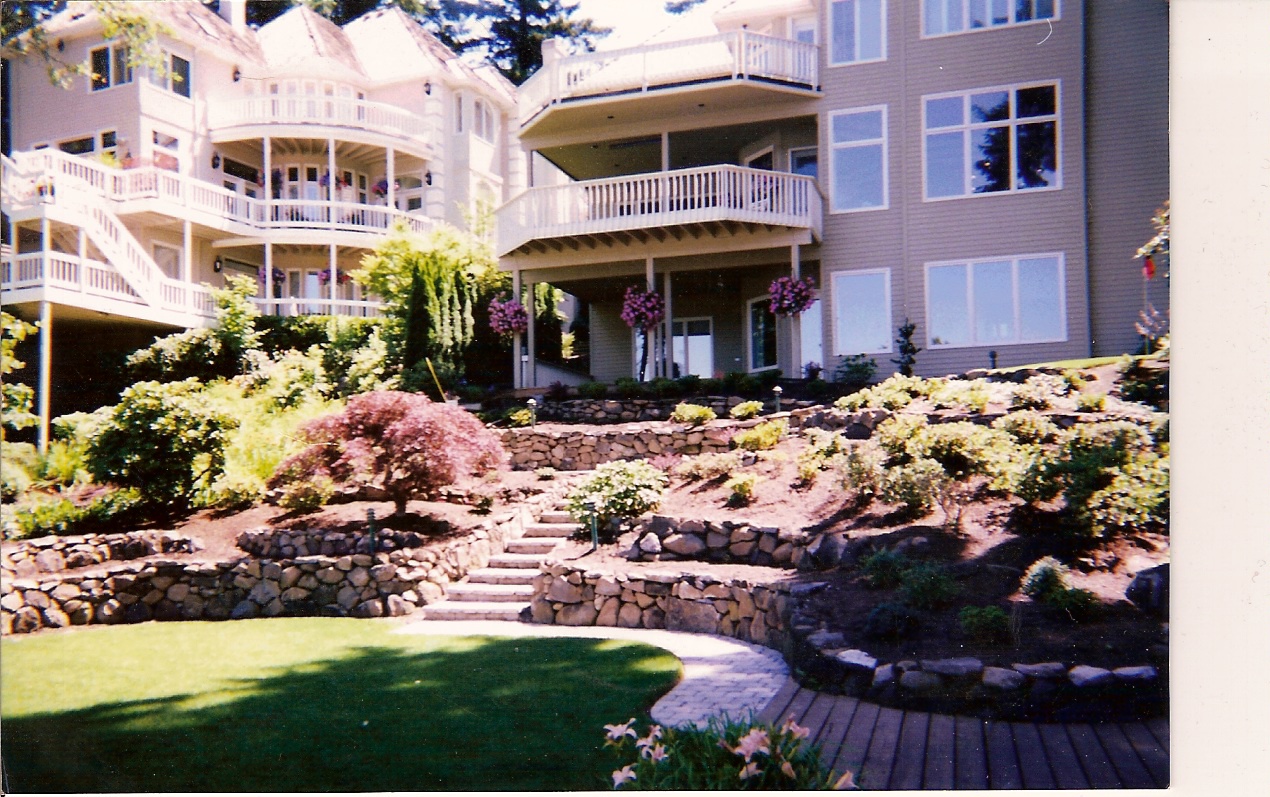 From the front, the items below began quite a bit less tidy………..note the trees on the berm are all blooming cherries. It makes quite a show in Spring….all bloomed out. 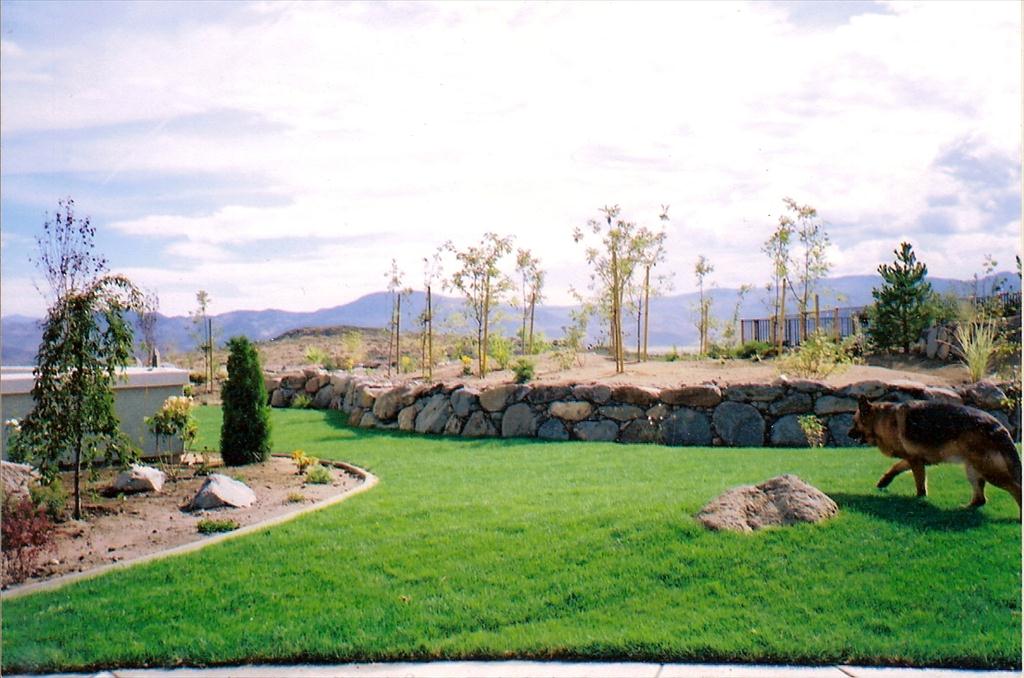 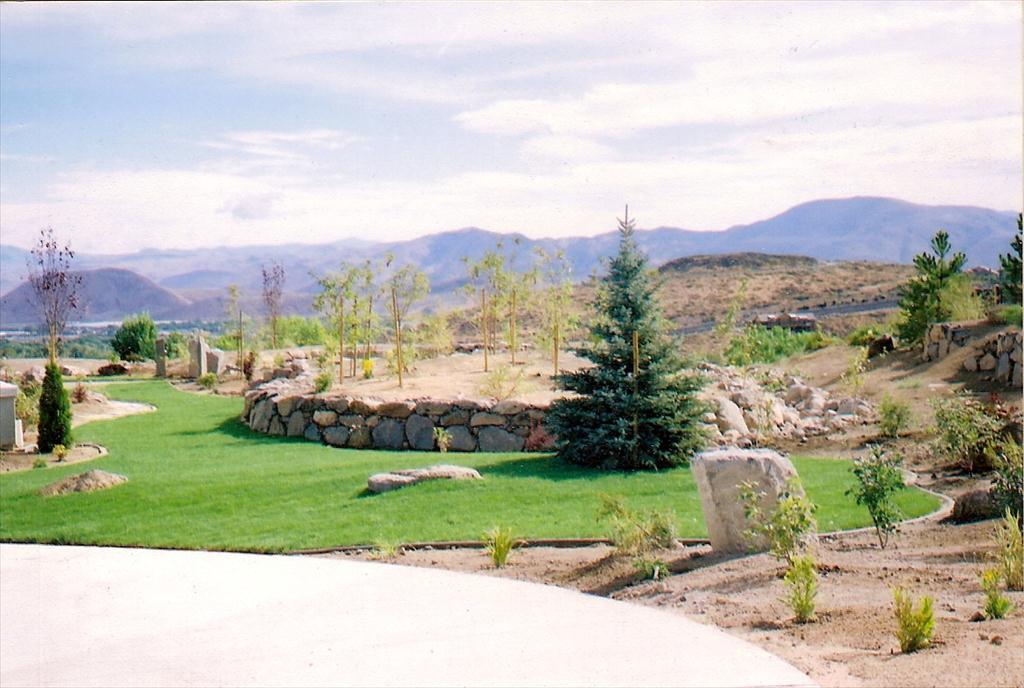 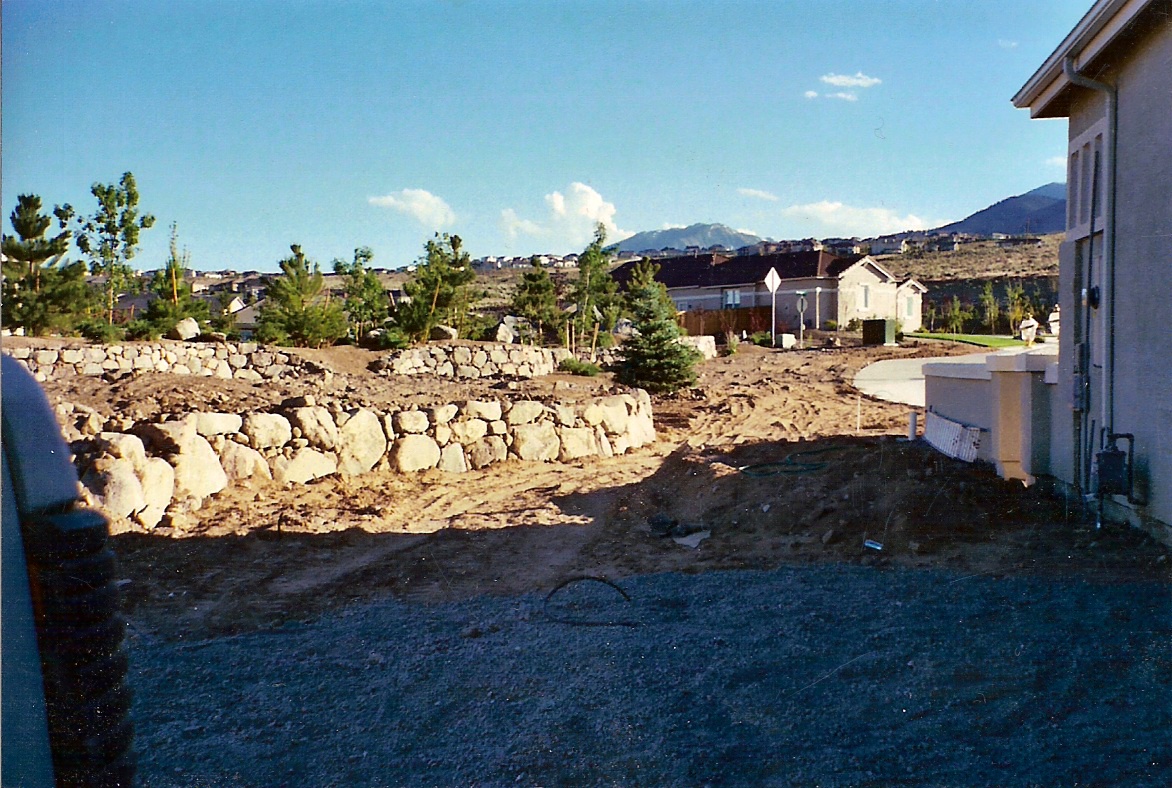 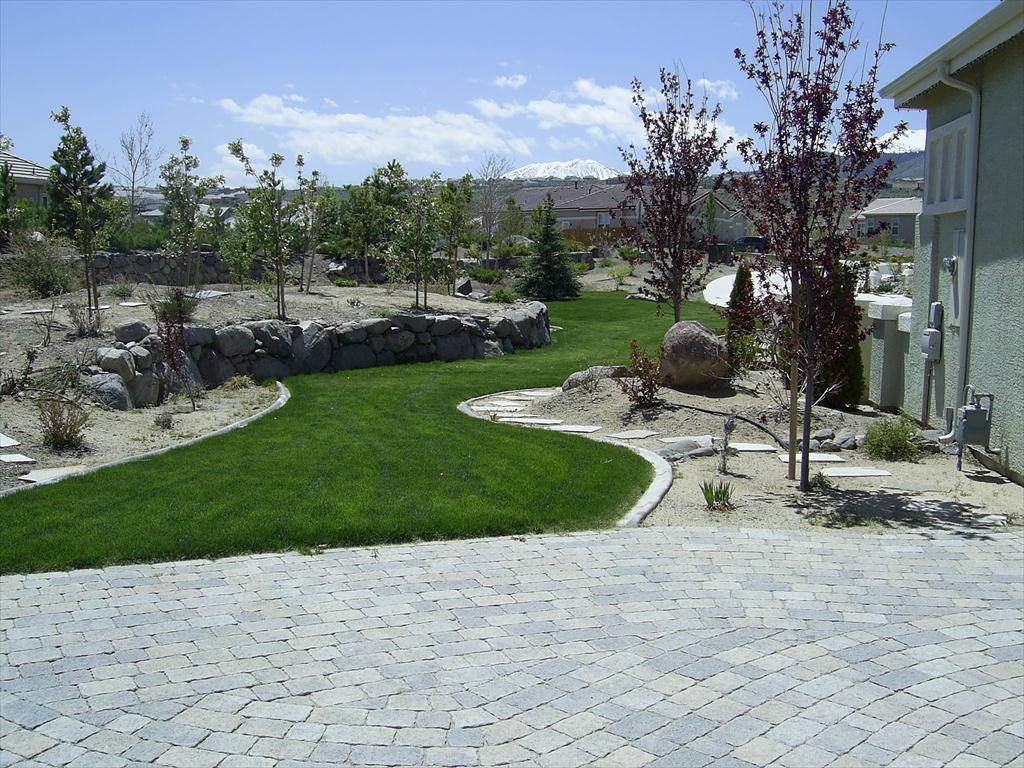 The above were right next to a walled hole in the ground – to the left – which we attempted to make solemn, quiet and reflective for our very devout Catholic client……. Bo wanted his very own personal “Grotto” – a challenge I could not resist. 😉 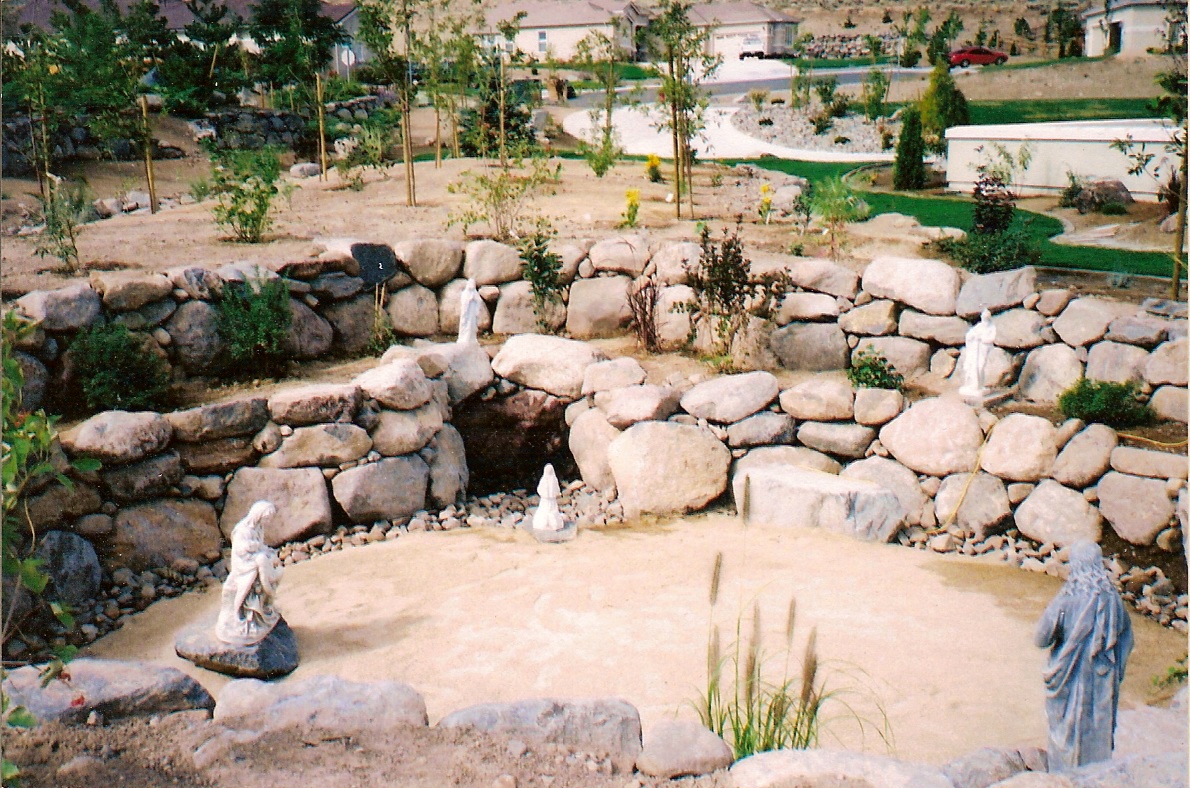 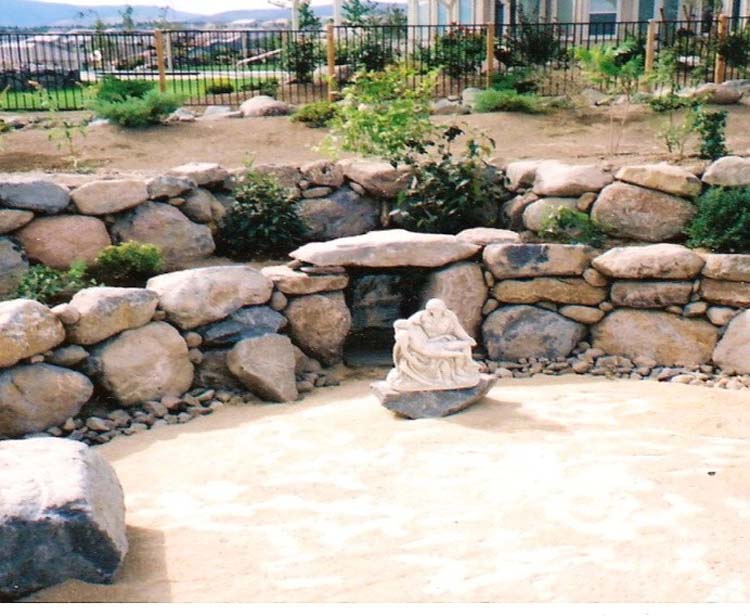 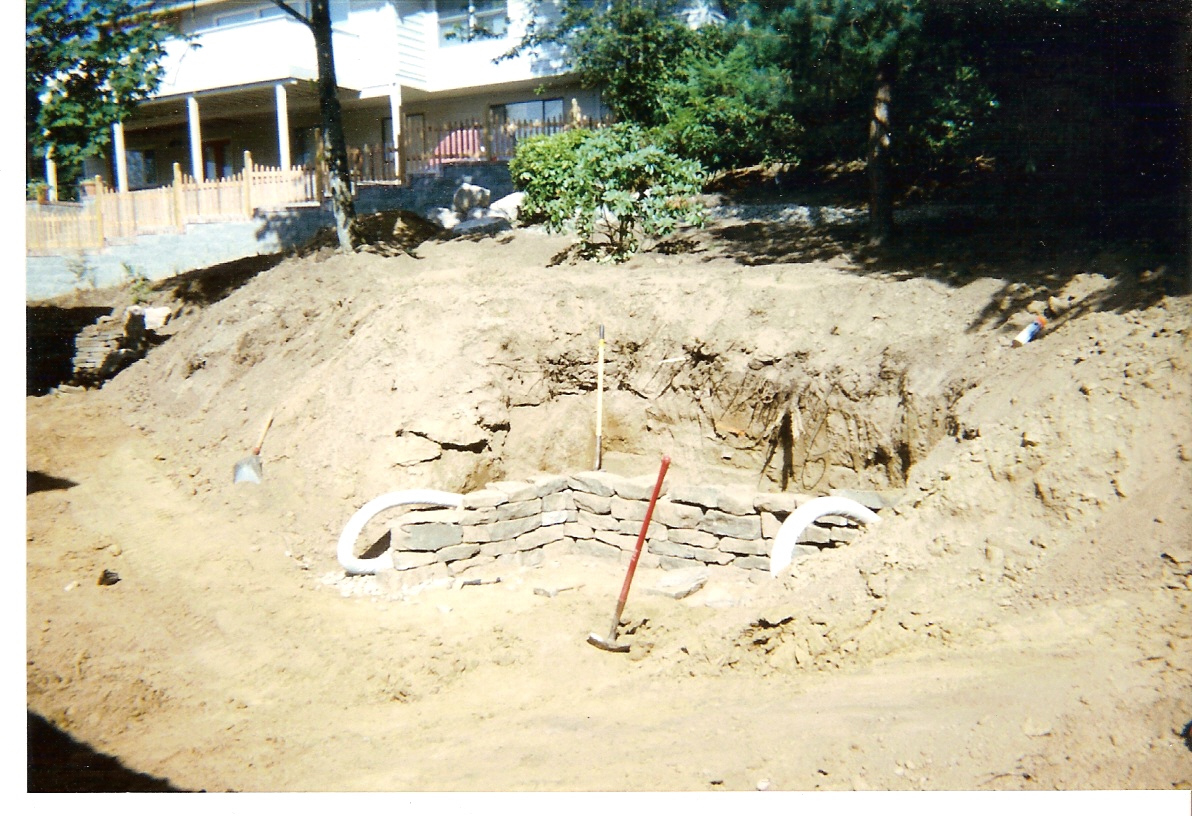 This is a “Hybrid”, owing to the available material left behind………….these boulders perform the trick as a “rockery” – semi-retaining a fairly serious slope and providing anchors where the roots of the eventual plantings knit a more serious retaining capacity. 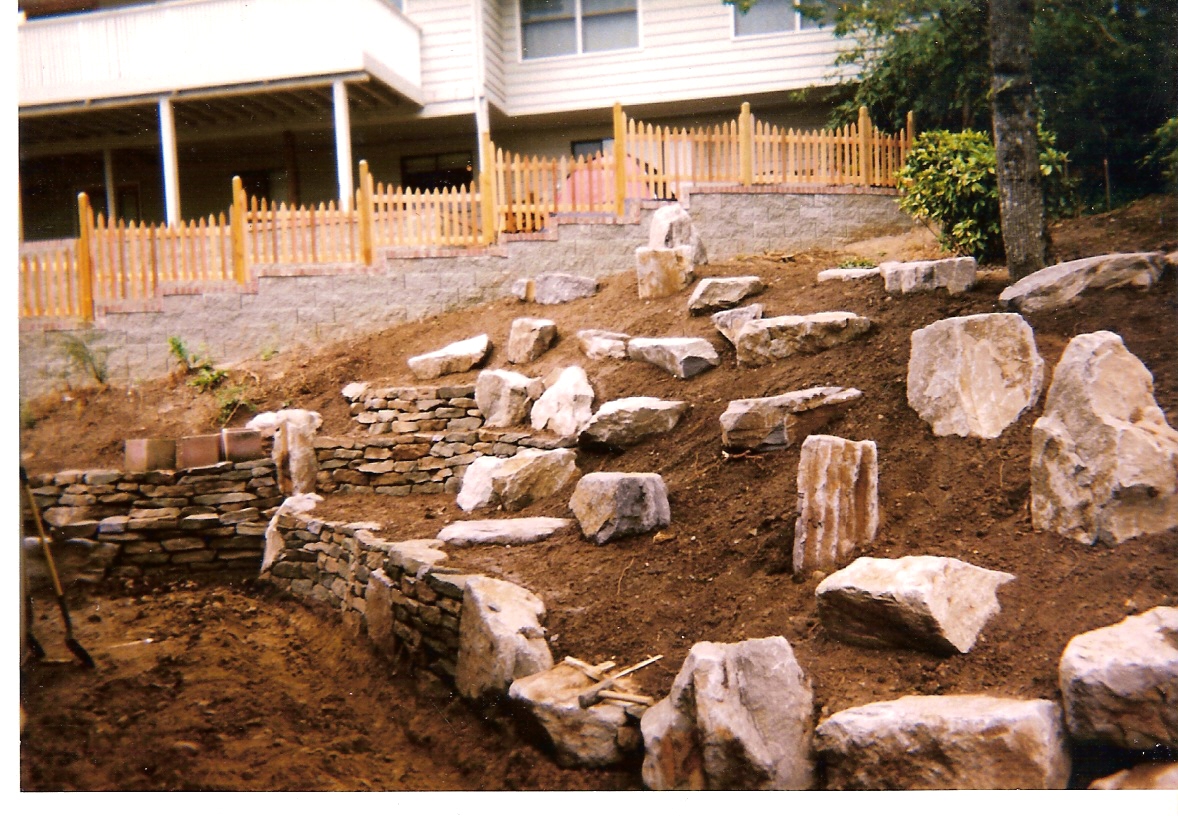 This was always one of those gigs where you felt like it was so much fun, we were stealing money. 😉 I mean, the toys I got to use!! 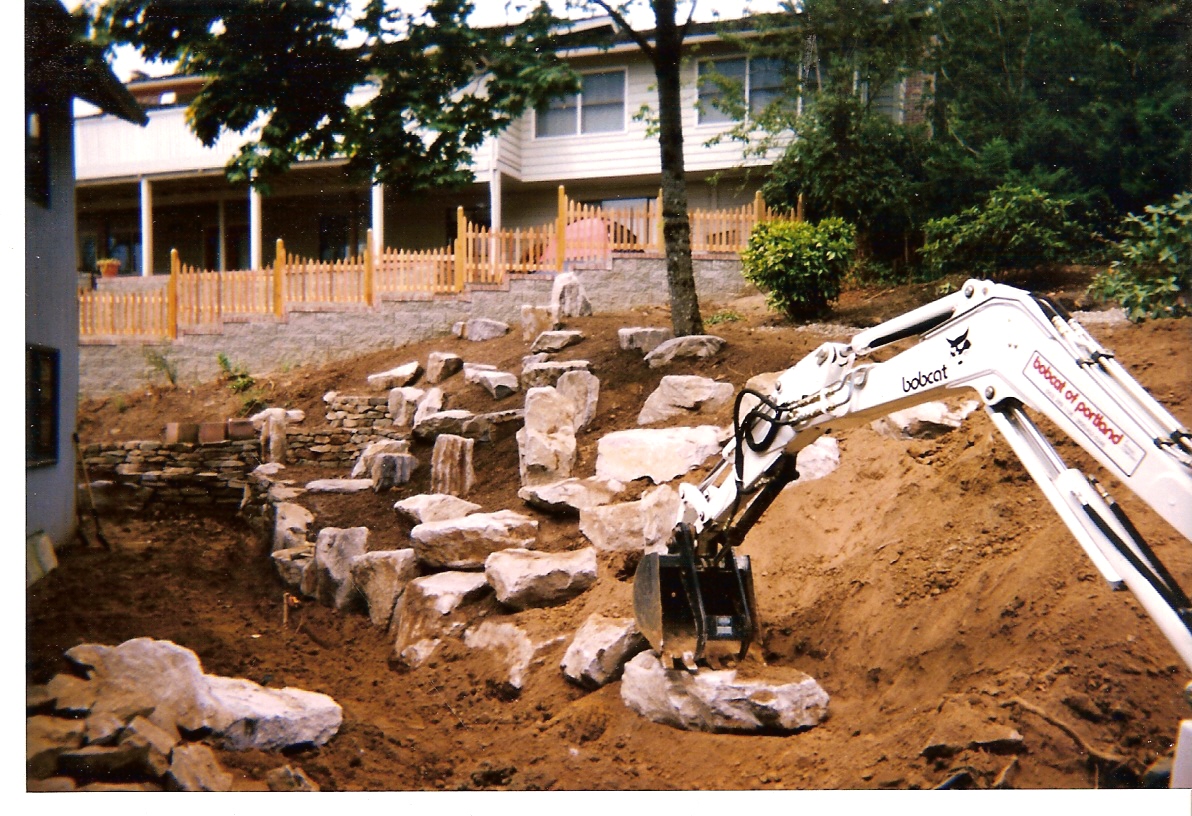 “Planted up”, we can see the sensibility involved: 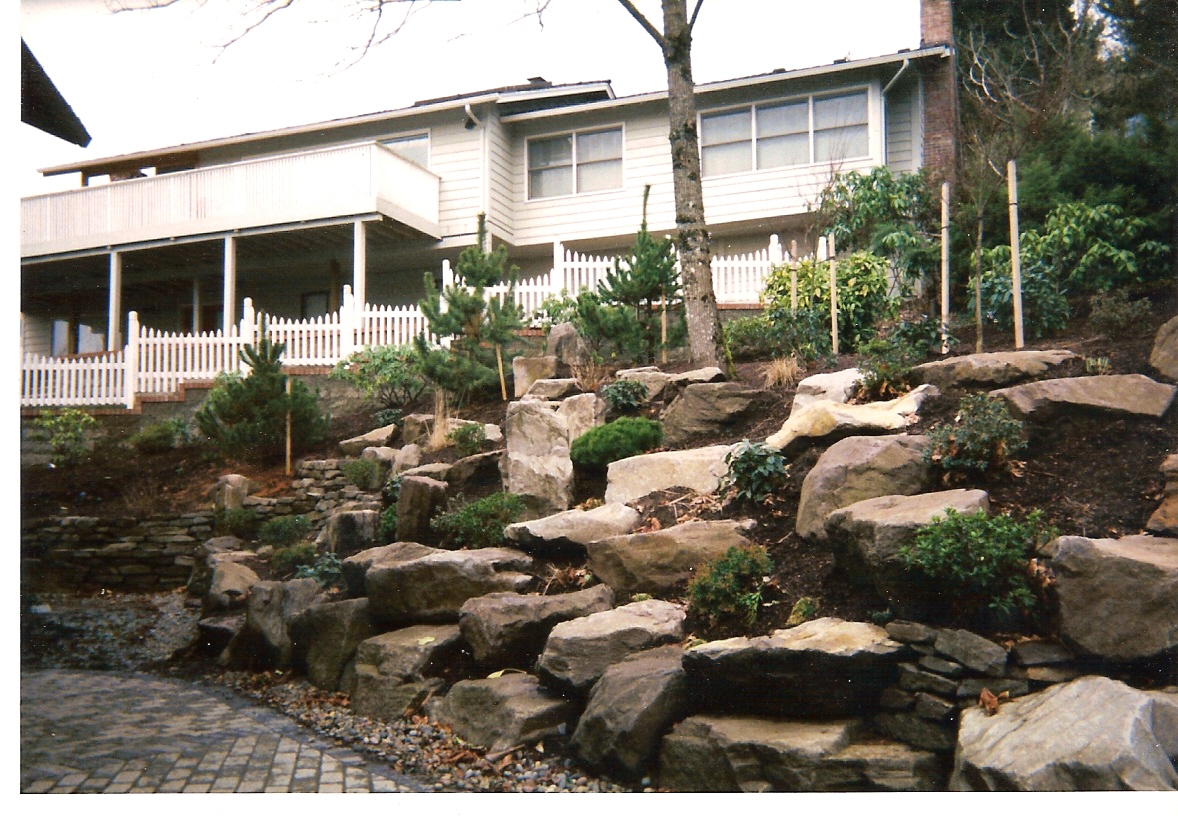 Not too shabby considering the origins………….. lol, the infamous “After-Before Series”. 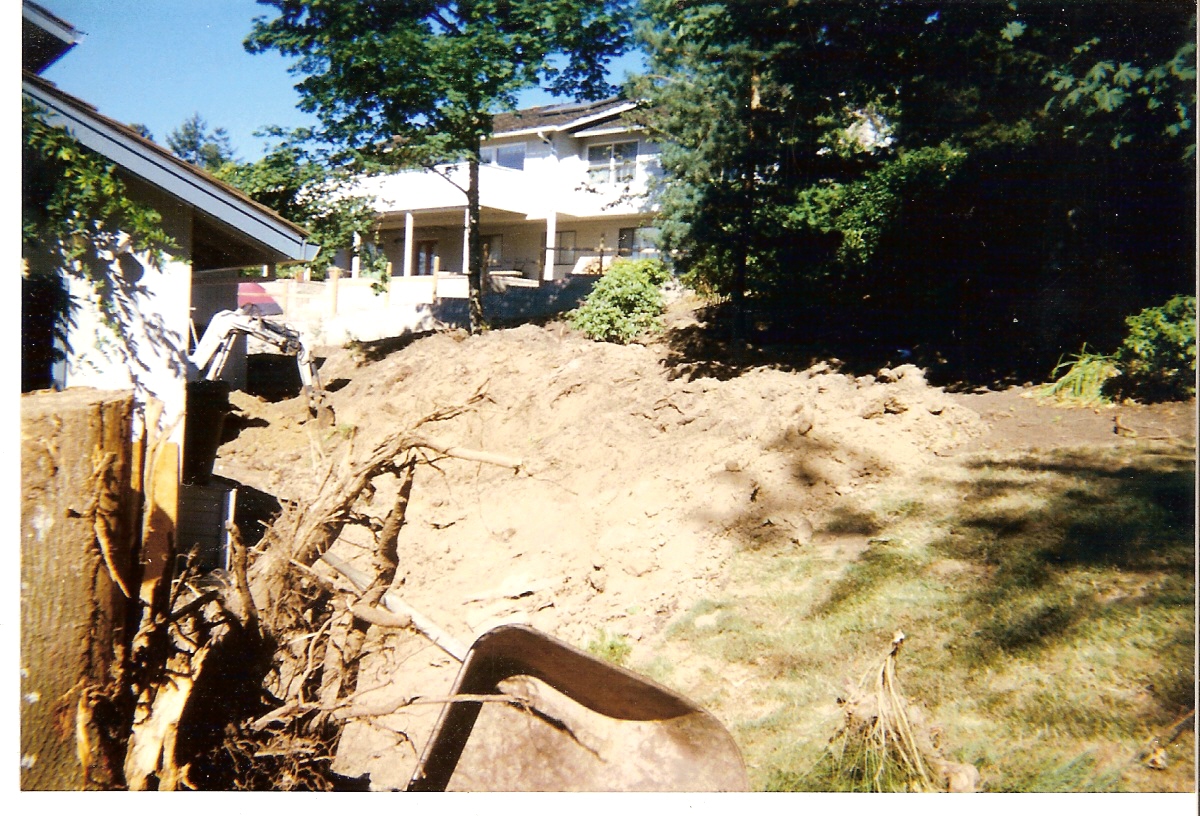 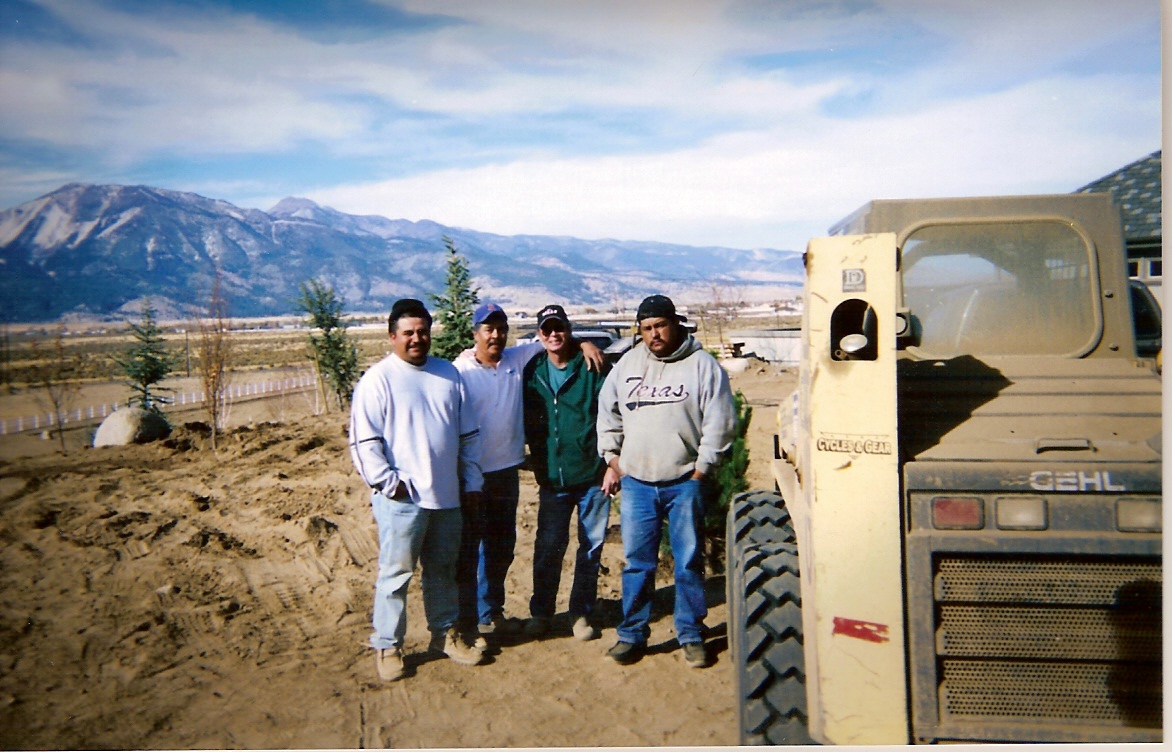