A path meandering through a garden can serve many purposes. They can be fun, enlightening, whimsical – they have a gazillion different possibilities. Their substance can be paved or loose gravel and every thing in between – in fact, the composition and the design of garden paths could be a website and a discipline all its own.

Obviously, the most common reason for a garden path is to allow persons to see and work there. The other “most obvious” use is to actually get somewhere – across a garden to the back fence, to a shed or facility. But it can often be “designed for discovery” – small surprises beyond the eye which are revealed by traversing the path. It can be designed for an overall organic focus – a sort of ‘Feng Shui’ notion, operating to organize a garden into elements which not only stand out but which fit in perfectly with their surroundings. An open door or window in a fence can absolutely welcome us – revealing its “purpose” when we accept what it asks of us and we look or wander through it. In Classical Chinese Gardens, like this one in Portland, Oregon, both the composition of the walking surface and the openings play a role in making us interested as well as comfortable in a rather formal setting: 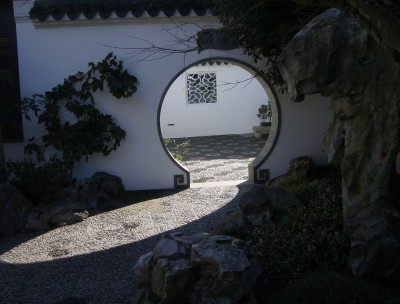 Our own homes have a similar but different demand. We are less interested in being formal, for one thing. Plus, we don’t have budgets to support what a Chinese Garden can supply. We also have a secret: we can do whatever the heck we want and make it look good over time. And sometimes, simplicity rules anyway:

The basic idea is to keep the feet out of the garden dirt, to keep feet from compacting soil and disturbing the overall look in general. One can use any number of products – here, for example, is a system of round exposed aggregate stepping stones wandering around a water feature and providing access for a hose and a place to watch duffers plying their addictions on the golf course below: 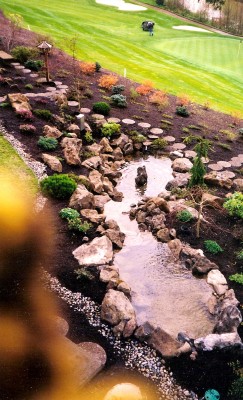 Natural stones, too, can provide a gorgeous walking system in a garden. Set close together, as in this grouping, it’s the next thing to a sidewalk:

This one winds for quite a while, out into the garden. From here:

Alongside this “swamp” we engineered – “where the wild things are!” 😉  -for this Portland home, stuck as it was beneath the level of the road out front:

The series of Panorama pictures from my older files below show the path as it wanders alongside the edge of the bog. Its terminus is the little “mini patio” where the bench offers a relaxing place to enjoy the riot of all the various bog plantings we were able to conjure up, including flowers which don’t exist outside of real wetlands:

Please enlarge for the real effect. 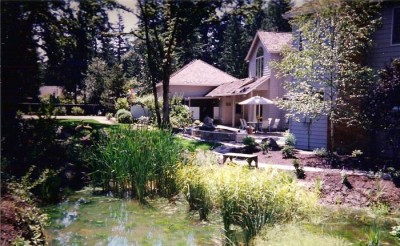 A better view of the plantings. I always liked this project, right from the first. First of all, it was originally owned by Kevin Duckworth – a huge man, center for the Portland Trail Blazers pro basketball team for a while, all 7′ 2″ of him. (that’s about 2.25 meters for you non-Americans, lol). Secondly, it presented a humongous problem. Yes, the street and anywhere we could imagine to take the semi-copious amounts of drained water from this big site implied a pumping and collection system which was neither plumbed for nor electrically close by. We decided to go with a swamp/bog, knowing that the mosquito problem in Portland is hardly serious. It actually worked perfectly and, as mentioned, we were able to arrange plantings which grew so well that we had to thin them out after less than a year. Cool project. The circular thing below hooks up to a garden hose and rotates, swirling water out and creating small, real live rainbows.

Back to the pathways……….

On a drier scale, natural stones can be their own effect, set in a sparsely-planted, desert-like design:

Harsh but still interesting, with much outside the confines of the yard to attract the eye.

And there are more………..pathways to guide us and take us places – places to work or just admire. 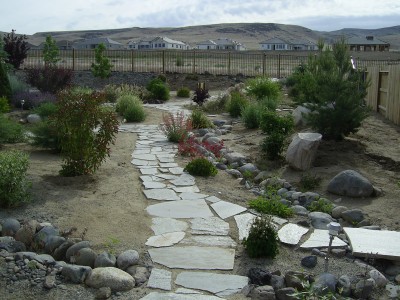 The beauty is that anyone can install these themselves. These systems are made for the do-it-yourself landscaper who has some time and energy and a will to create his own space. The truth is, it is one of the single most enjoyable operations of installing landscapes. Give yourself a firm underside, slide your stone in place, fill up the edges of the stone so the tipping is minimized and you’re pretty much off to the races. Or, in this case, “off to the wanders”. 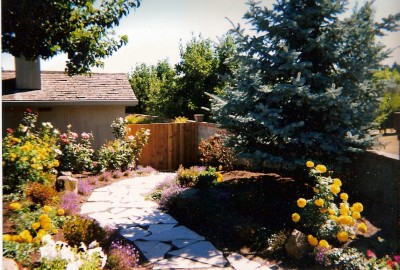