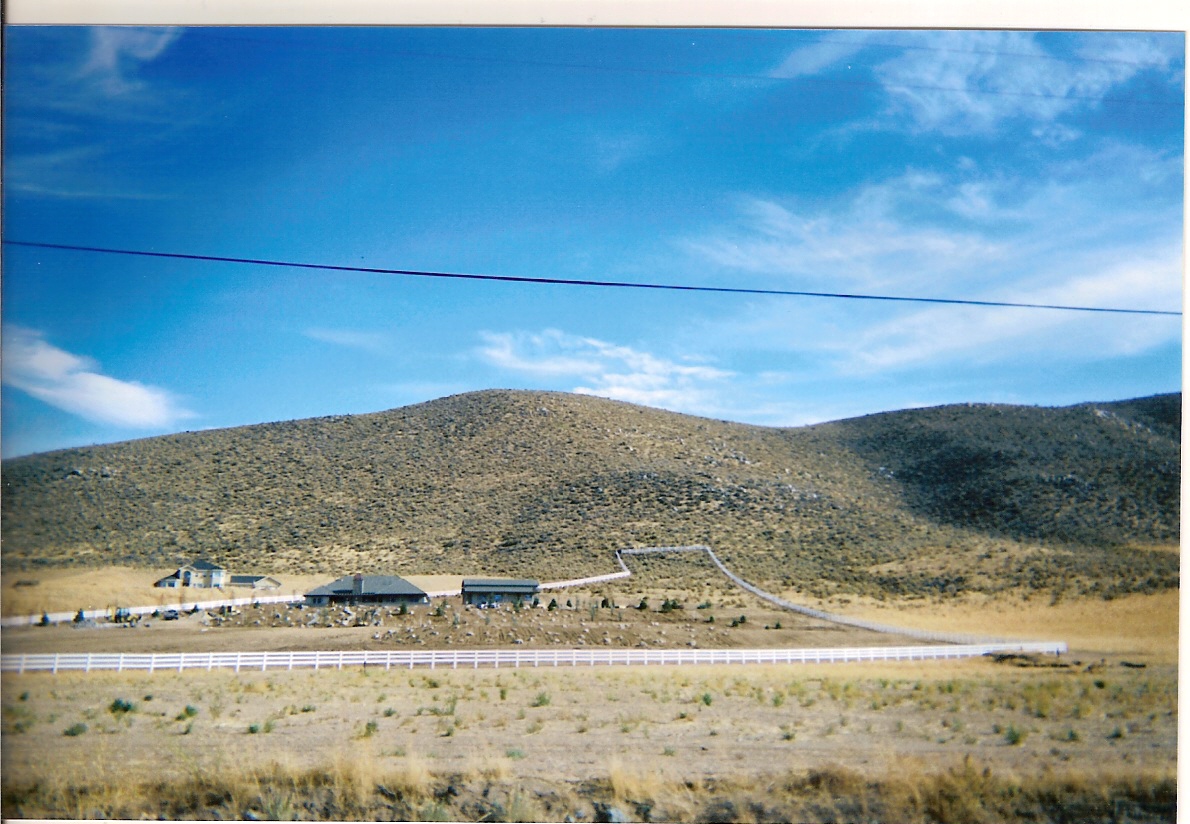 This is a view of the project from the nice and bucolic highway out front of this place. The road actually travels the length and width of Washoe Lake, a lake about 15 miles South of Reno that has been a recreational and great fishing spot for Renoites for decades. This particular highway was once used as the primary link between Reno and the state capital of Carson City until a sort of super highway was constructed on the other side of the lake in a more direct path to Carson City. Yes, it is smack in the middle, more or less, of Northern Nevada’s High Desert. And, yes, this property is pretty doggone large – 10 acres of landscaping, in fact. That’s big for anyone, much less my crew of about 4 other persons. But it was one of those challenges I could not resist. The owner – a friend and client for commercial purposes – is a local builder who loved the relative isolation and the superb vista’s this place tossed out like “mana from heaven”. As the post continues, you will see what I mean. It is every bit of that – just gorgeous. Well, our job was to make it gorgeous at home too, not just for the view. The fact is, we were working on someone else’s “Dream Home”. When this happens, you raise your game just a little.

Here is that view from the house: 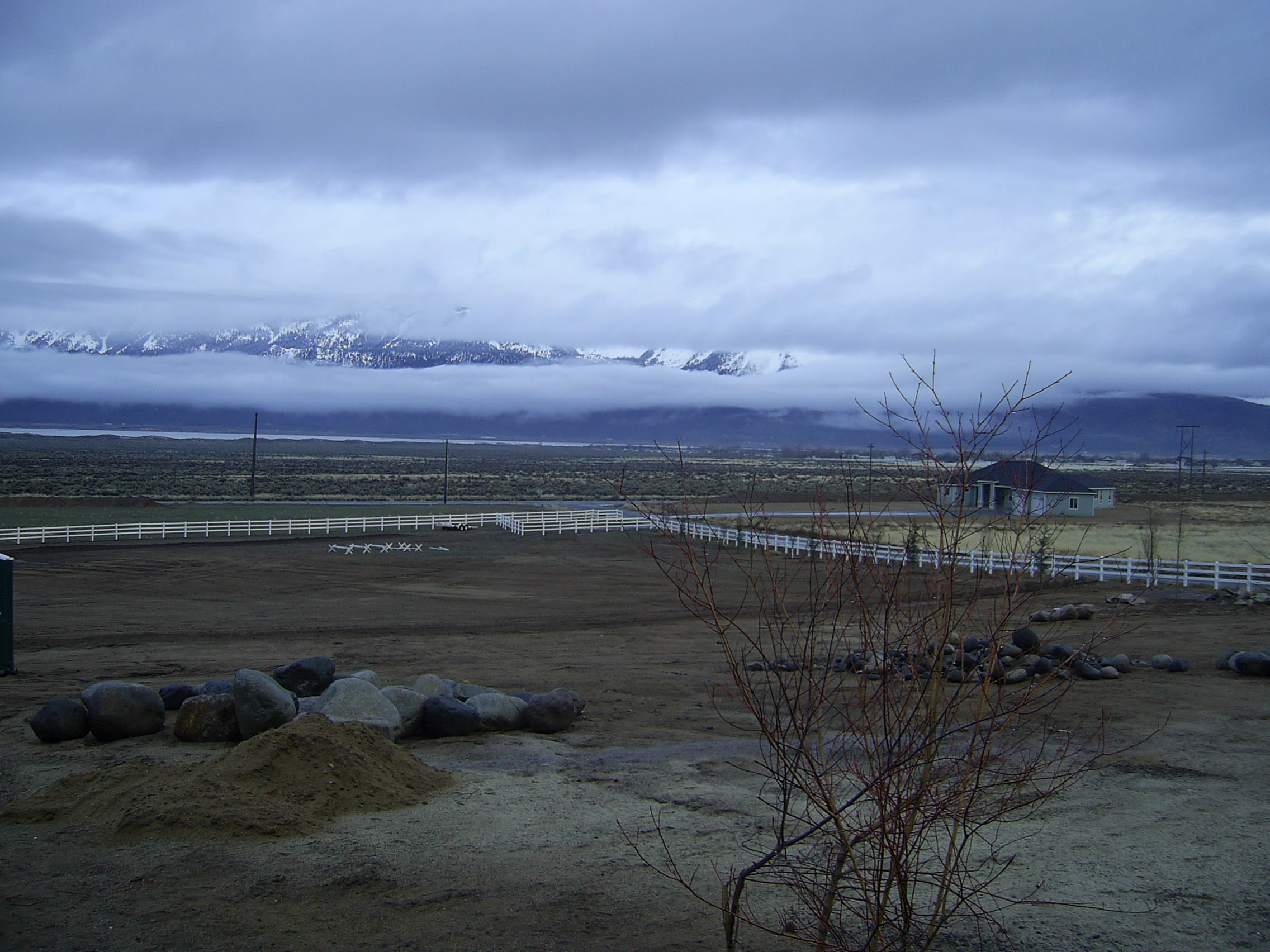 And here from the road down below: 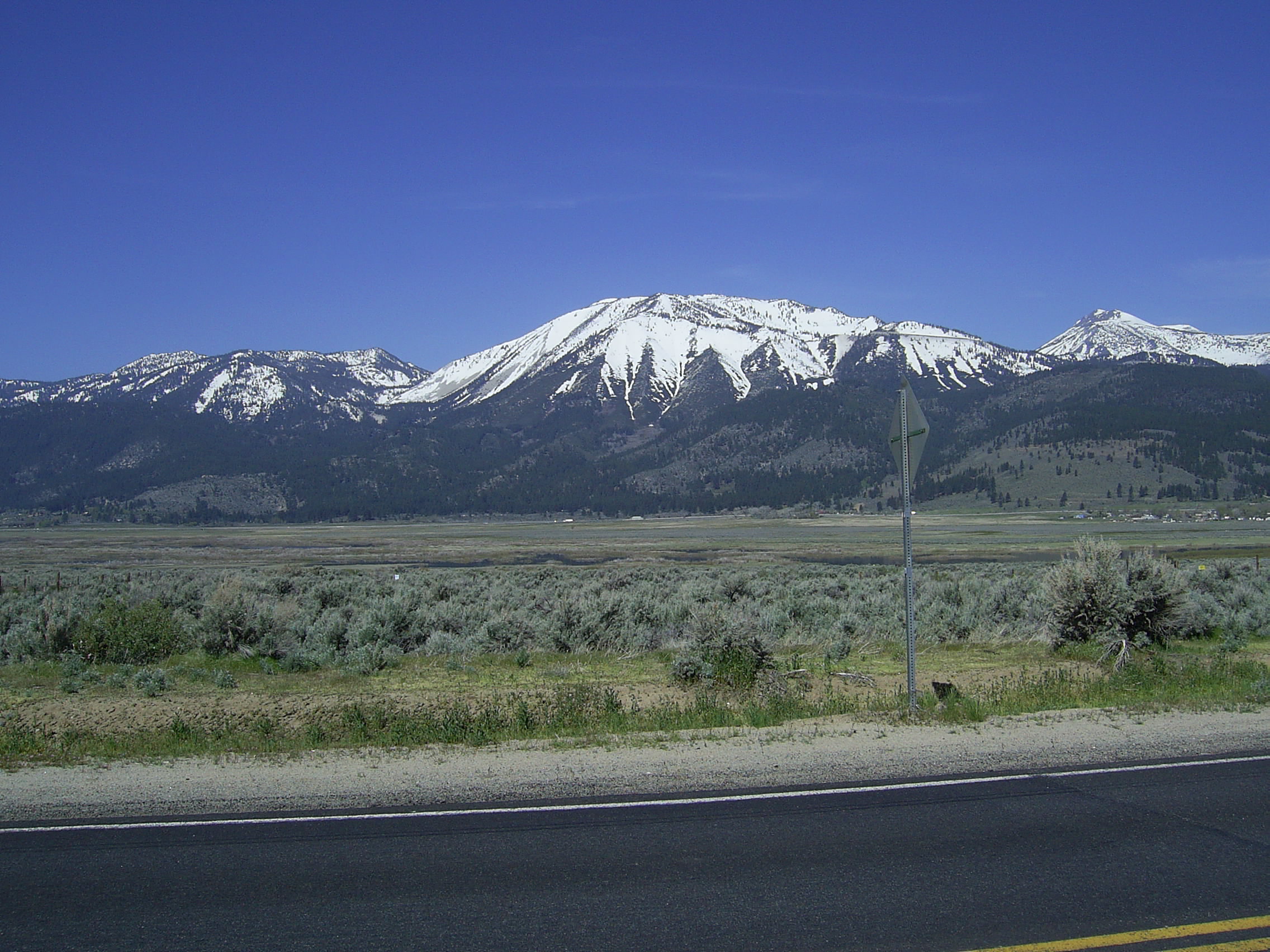 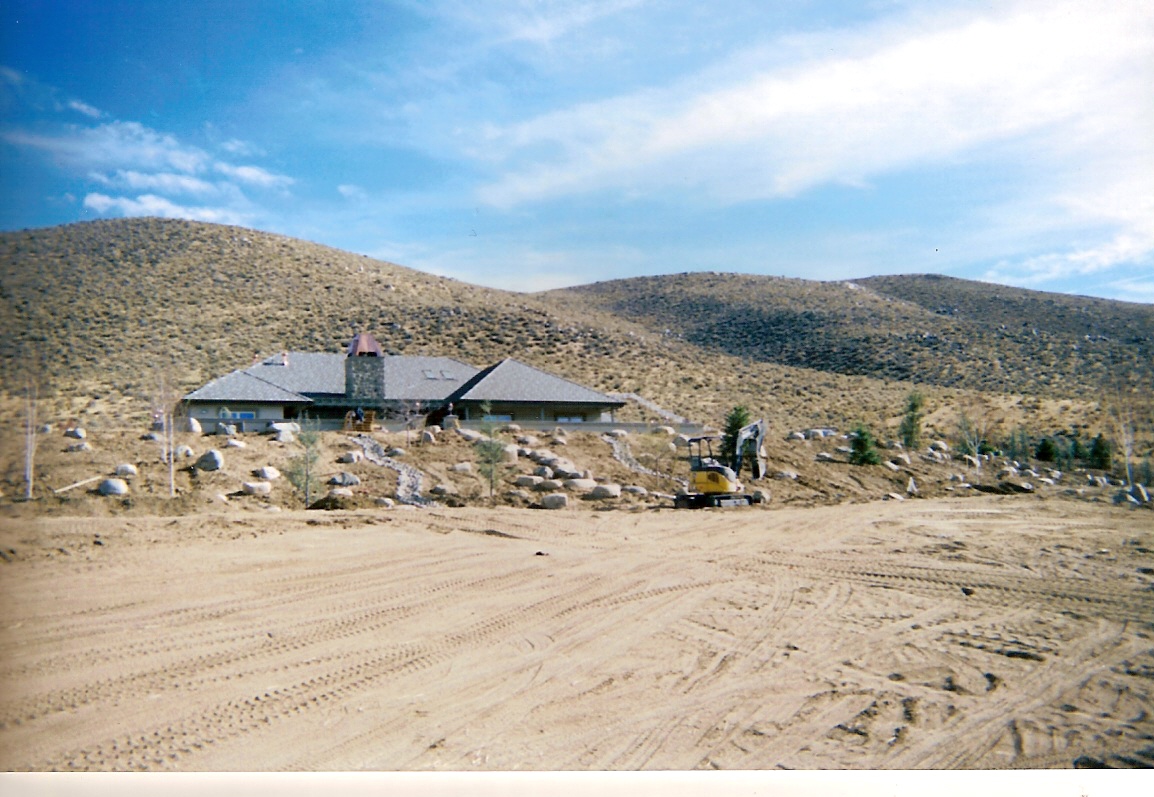 A bit closer look here, inside the fence. If you notice the fine dust in the foreground, bear in mind the entire property was nothing other than that when we began. It was entirely shaped using local topsoil which was incredibly sandy/silty and which caused no end of problems for no end of reasons. It was the old lake bed, in fact, since about 10,000 years ago there was a 6,000 square mile lake connected to this one – Lake Lahontan. Up there in those hills – at about 200 feet – you can still find caves where fishing implements were found by local archaeologists.

Prominent among the problems we faced, of course, was the dust factor which the rather constant winds just exacerbated no end. (Our debt to the Almighty for creating the phenomenon known as “grass” knows no bounds.)  The other humongous problem, later, was erosion. Everything we did – even from the first – bore this in mind and we enacted every single bulwark we could against having the place just erode away. Our efforts paid off but there were still some dreadful surprises, including a legitimate “100 year storm” which tested our construction to the max.

My charge was to complete his own small laundry list of items – 1.) 2 “Bubble Rock” clusters in his patio; one much larger than the other; 2.) for us to irrigate and supply some lawns areas, the design of which were up to me; 3.) obvious pathways throughout the property; 4.) a system of retaining the inclines throughout using rock placements; 5.) plantings for all these things and more. His wife and he were very much involved at every stage and were always helpful – never bothersome. She had a number of specific plants and he had his own specialties he wanted and could not care less about plants. “That’s all her’s!”  LOL.  Funny enough, what got done was they both maintained how much they enjoyed the specialties of the other, when completed. It was win-win! They and I could all feel smart as whips. 🙂 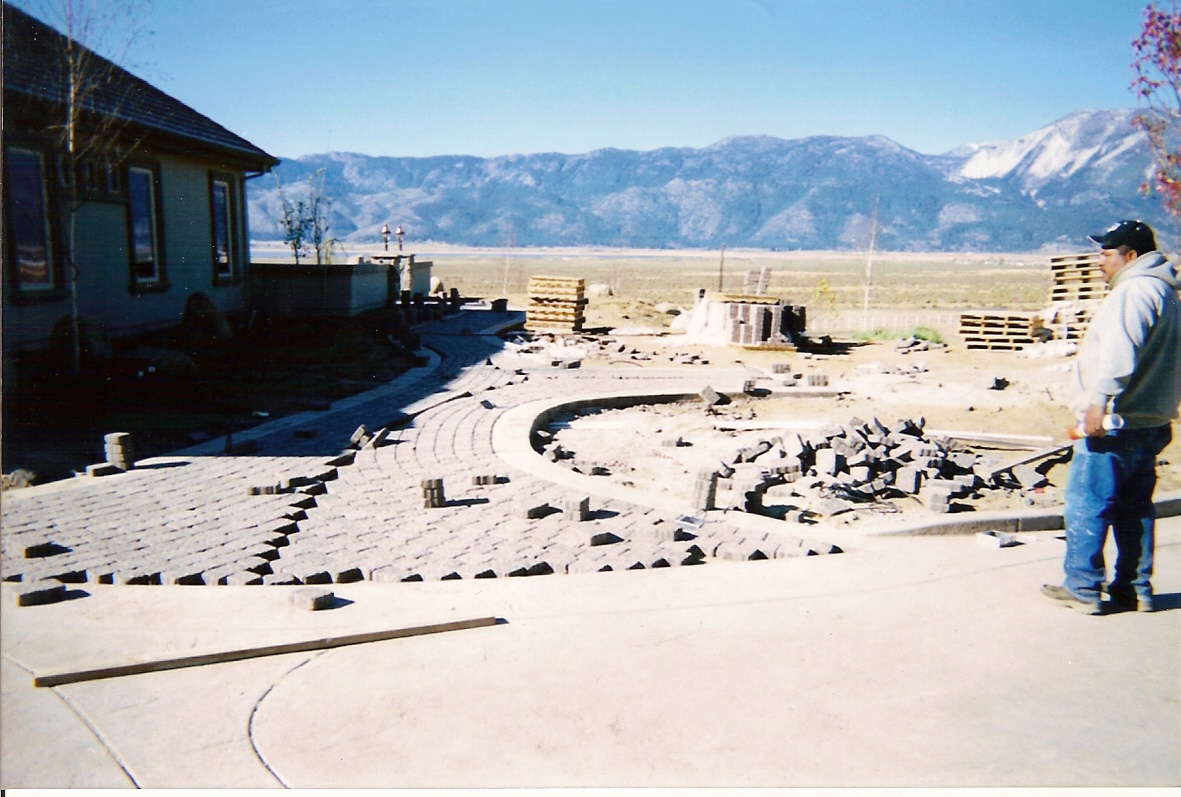 Inasmuch as we showed up on that dustpile with it absolutely fresh and barren, our first order of business – as usual – was to arrange rocks/boulders. We had some 25 loads of rocks delivered altogether in either doubles or in the back of 25 yard trucks. That makes just about 500 tons or so. Since we began the project in September, we had some pressure to try and shore things up and get the rock work done by the Winter, when Reno gets its snow and rains. It was fortuitous in so many ways for us. We pretty much finished the rock work in late October and began walkway paving and planting the trees next. 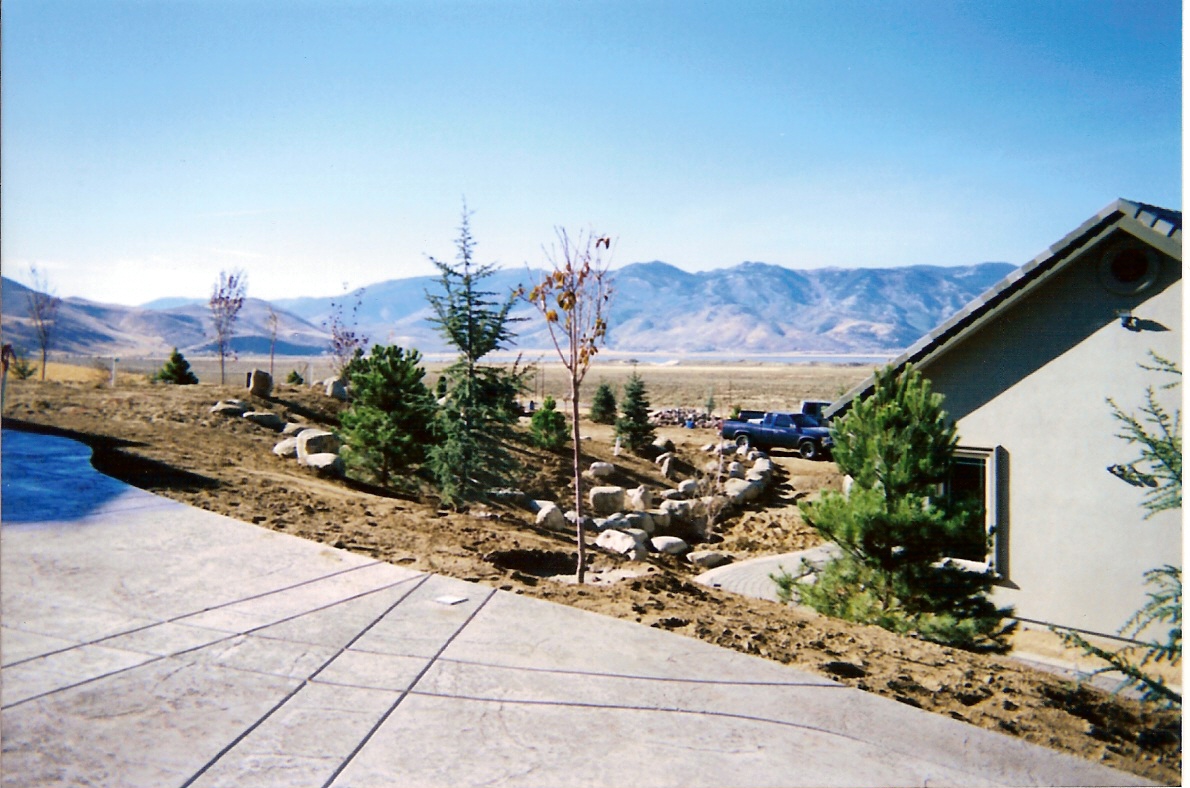 Many of the sloped areas – and there were a lot – required “keying in” lines of rocks at the base for purposes of holding the banks up. In some cases, more extremely-sloped areas, we added a row at the base. As well, we inserted boulders to help fortify the overall integrity of the slopes. I regret that quite a few pictures of this project have been lost – from the earlier stages. Nevertheless, I think it won’t take a brain surgeon to figure it out. After all, consider the author of this post. 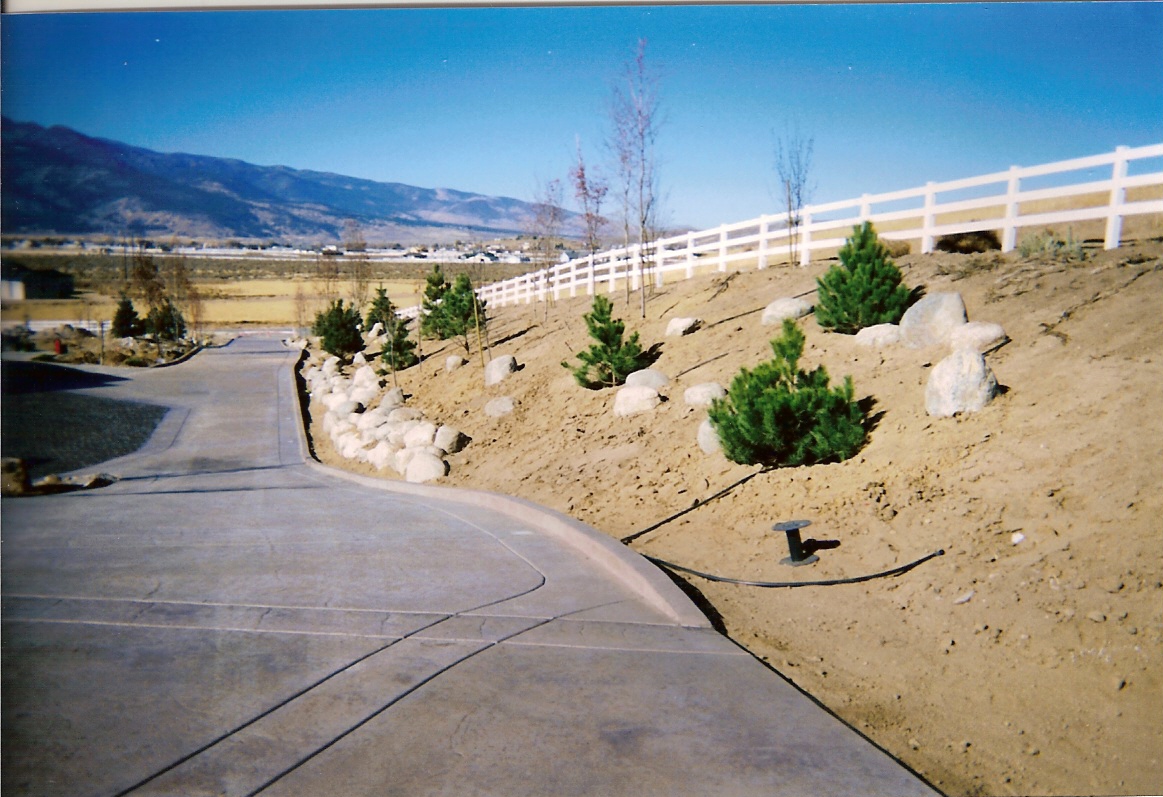 The visible pipes and even the wires seen here are strewn completely throughout supplying the drip irrigation and the “uplighting” around trees which we installed soon after completing the tree planting. As can be seen, the pathway itself – and also the driveway – was also lit by small 7 Watt bulbs in frosted covers, illuminating a walkway and the drive in an area that can be virtually pitch black on cloudy nights. As astounding as the night sky was when it was cloudless, with a starry heaven just remarkable to behold, it could be just an severe when the night sky was not lit by a moon or stars. We are definitely talking about “out of town” here. 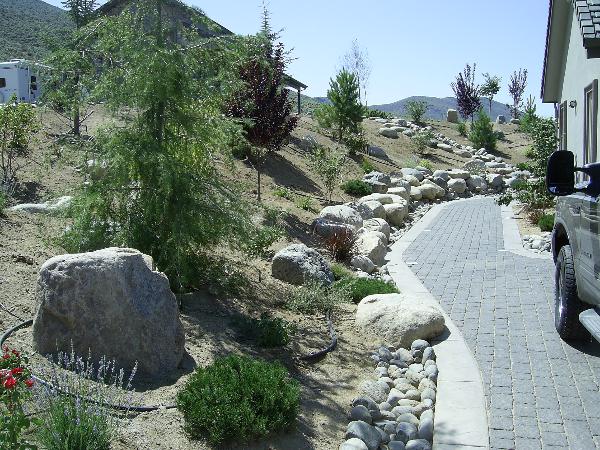 One of the “great good fortune” aspects was the time of year when we decided to go purchase plants and trees.  A local nursery – the largest in town – was clearing out a humongous stash of trees – any of which had been sitting in their nursery for more than 2 years. The implications for us were that we were able to acquire an absolutely obscene number of huge trees for about 1/3 their normal prices or even less. It was a fantastic development and it allowed us to plant better trees and plants arranged much thicker than I had ever dreamed. Needless to say, it made me look like a genius to the homeowner and he gave me some room to buy what I deemed worthy and plant them all appropriately. I was in 7th Heaven. 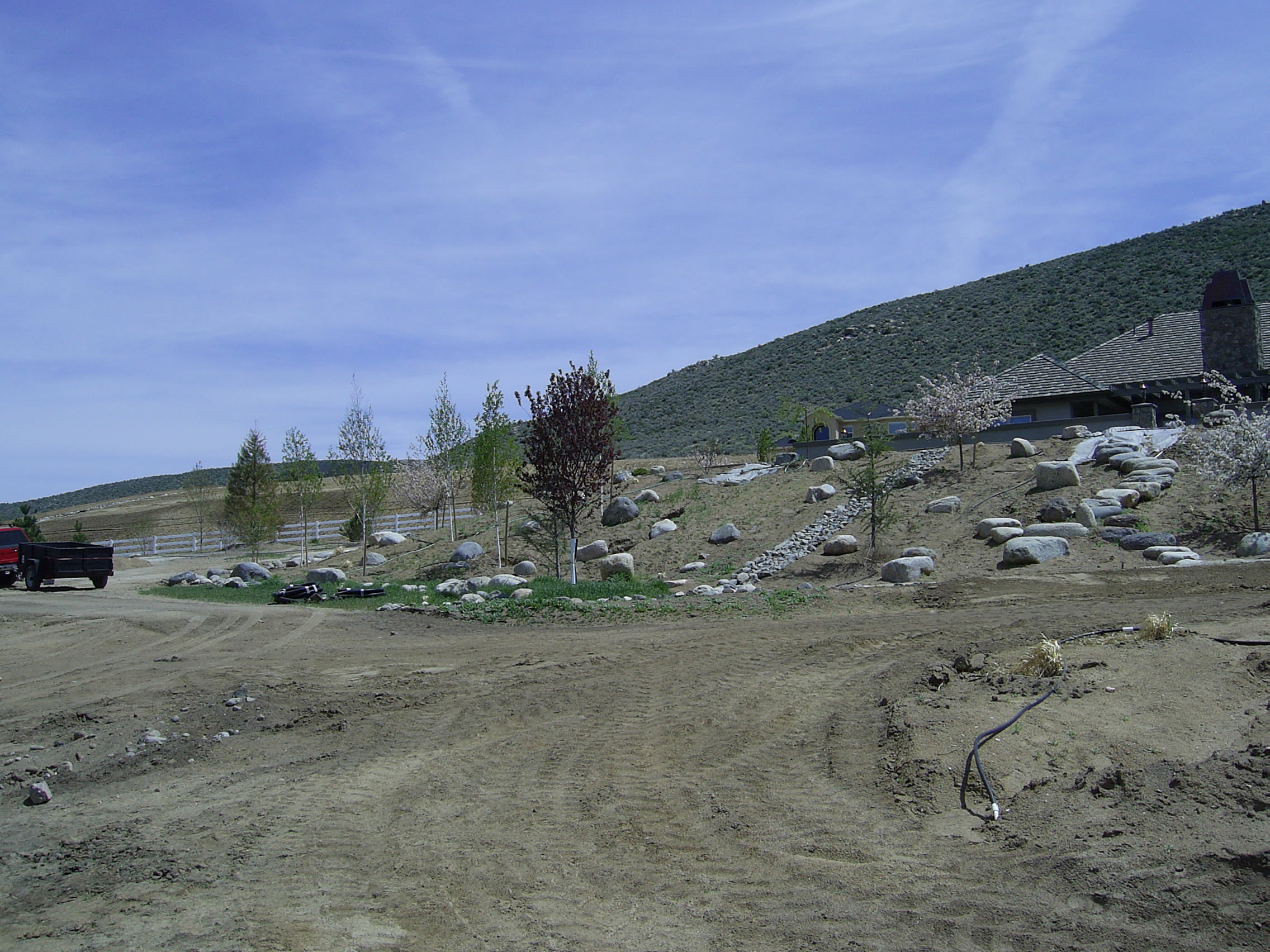 We were enabled to plant literal groves of trees such as these Jackmontii Birches above on the left. We also found 20 foot high Sequoia’s, a wild number of large Blue Atlas Cedars and Pines of all types. Blooming trees were available in abundance as well and I scooped up nearly everything they had for a serious Springtime Show for my friend’s place. We’ll see in the next post how that all worked out.

Only one thing kept the project from working out like an absolute dream…………………………… Weather.

That 100 year event I mentioned really did happen. Fresh off a huge snowfall, unbelievable rains began hitting an already-saturated ground, resulting in a basic catastrophe. All those hidden concerns about drainage and moisture disasters descended on the place and created a disaster. Next door, the entire hillside collapsed, running down onto our project, just liquid dirt, in tonnage, not just a little. Not only that, but the amount of water collected from the entire mountain came down as well. It seemed all those smart and wary moves we made considered everything but a disaster resulting from someone else’s property.

I’ll delve more into this insanity in the next post.