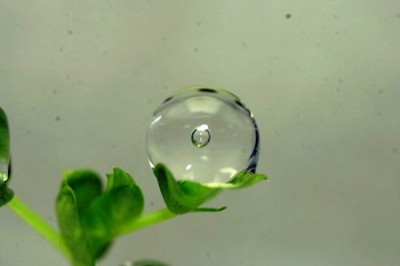 Modern times are heading at us like a freight train. An expanding population increases the need for water resources like never before and we find ourselves these days on the verge of wondering where the heck it’s going to come from. Here’s an irony – living in Portland, Oregon, set solidly in the Pacific North West and subject to incessant rainfall for fully half the year, we find ourselves in drought conditions many Summers. Something so apparently reliable as water in a rainy climate is less than that, it turns out.

Having lived in Reno, Nevada as I have yields another irony: They may be better off. The planners in Reno developed large reservoirs in times past which – admittedly – depend on snowfall during Winters, but snow in the Sierra Nevada Range is pretty predictable. Nevertheless, they have also reached a controlled panic stage since the city expanded so rapidly. When we look at Las Vegas or Los Angeles, then we see real panic with plenty of reason. Indeed, a controlled panic may be the way to typify things all over, in the end.

The explosion of landscaping in American Society, where economic times have yielded so much wealth and improvements within the span a just a couple of generations presents us with something of a quandary. As immense as the landscaping designing of our homes by ourselves or others has become, we find untold numbers of people gardening for food as well. Neither of these things is particularly in the category of “sinful” – in fact, far from it. Yet, each requires a perspective and the sooner we acquire a reasonable perspective on our roles in improving the areas of water wastage and include a few less water hogging elements, the better off we will all be.

What adjustments do we, as gardeners and landscape designers and professionals have to play in improving things? 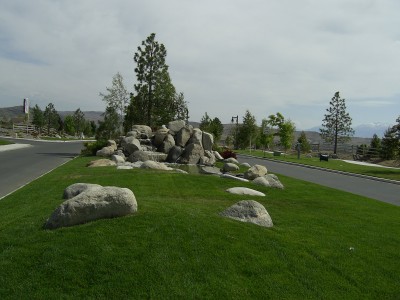 I have spent much time converting grass lawns to beds and plantings. Grass is indeed very water-intensive, as wonderful as it can be. I have come to grips with this fact by actually changing much of the focus of my own designs from lawn-dominated English models of landscaping – a truism in the US thus far for 100 years – to elements that feature alternative elements. Things as simple as flower beds or planted shrubbery occupying a larger area actually end up making for a far more interesting landscape in the end and certainly draw less water. This most certainly does not exclude grass lawns from consideration whatsoever. But it does mean the massive areas they once occupied can be replaced and broken up. Of all the elements in a landscape which use most water, I am afraid grass rules the roost by a long way. Looking at the waterfall above and the lawn below it, if you were to compare which uses the most water on a daily basis, you would find that the grass uses approximately 100 times more. Naturally, the waterfall merely recycles existing water, although its evaporation and its “splash loss”, especially in high winds, requires an automatic irrigation control valve to top it off daily.

Nor is grass necessarily that hoggish. We have found that hybrid grasses have been developed which root very deeply and thus require not only fewer applications in terms of their numbers, but even of time and general volume.

The Advent Of Irrigation In Common Usage

When irrigation systems first arrived onto the homeowner and commercial landscape scene, they were used to relieve us of the pain of manually yarding hoses all around the property and, of course, of depending on rainfall. Not only was this a labor-intensive chore, but it also set us up for immense waste. Falling asleep, forgetting the sprinklers – any number of possible minor disasters were possible and a timed irrigation system was actually an improvement in so many various ways. I will even offer the distraction of beer itself in my list of possible ruinations for lawn watering. Yes, sad but true. 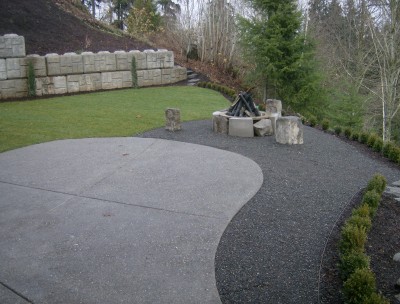 But irrigation technology evolved in a million different and congruent directions. Better and more efficient sprinkler heads, better and more reliable control valves, the advent of easier-to-program clocks and timers, drip irrigation (a huge one!), all conspired to make the entire edifice of irrigating plants and grass more efficient. It has come to a point where now a good design and the most modern equipment can cut in thirds or even much more what used to be unnecessarily voluminous amounts of water to sustain our garden’s growth. 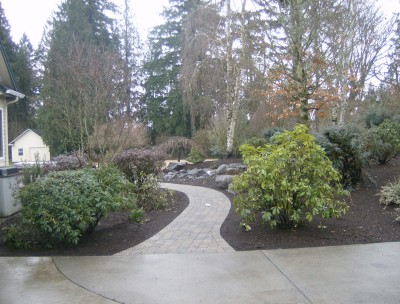 Better and more water-conservative designs make it possible to create masterpieces of efficiency even on large tracts of land. Blooms galore, weird and wonderful features like waterfalls, sculptures, patios, gazebo’s, outdoor ovens and fire pits and just the serendipitous arrangements of contrasting or congruent colors in similar masses or in riots of divergent colors are available to a water-wise gardener/landscaper. The current challenges to designers are cost-related as well, bear in mind. Water will simply cost us more. I cannot envision a world where the cost of water decreases. Therefore, and probably foremost, conservation will not only be environmentally responsible – it will be frugal.

I am going to focus on water for the foreseeable future in here. It is looming Springtime and we will soon be reactivating sprinkler systems for people here in Portland and down in Reno for the Summer to come. As well, some of us will be wondering how to approach irrigating things for the year to come. I just think it is most timely now, when we are planning, to understand some essential principles involved in irrigation and water-wise gardening in general. 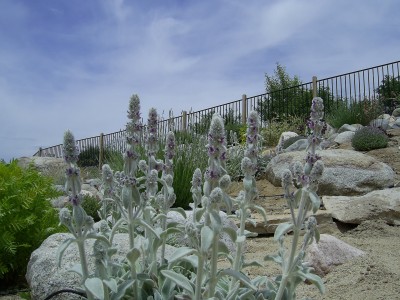 4 thoughts on “Water – Irrigation and The Garden”