I’m going to just plain indulge myself here. I have become quite the camera bug any more and this Spring is particularly loaded locally. I’m going to post pictures with or without comment, simply because I feel like doing it. All the following pictures are from my own particular locality – an otherwise average Portland neighborhood with some serious urban touches within blocks of where I live. These pictures are from my local rambles, a few of which will obviously be mini time capsules as they developed. Pretty much everything taken here is within 3 blocks of my place.

First, for the lovely Ms. Pomona Belvedere, I give you not only pictures of Pieris Japonica, but a picture of what happens when someone nurses an Oregon Grape like it’s a primary object of plant love or something: 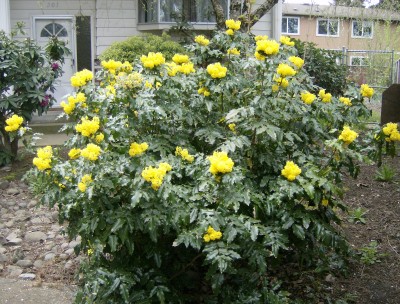 And here is the aforementioned Pieris: 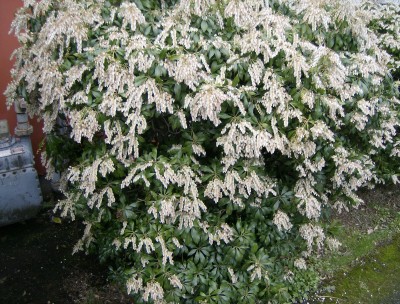 Then on to the  “Forest Flame”: 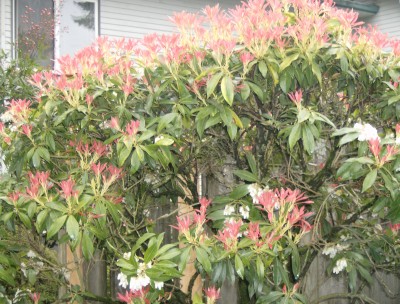 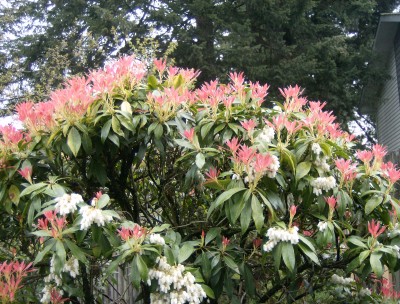 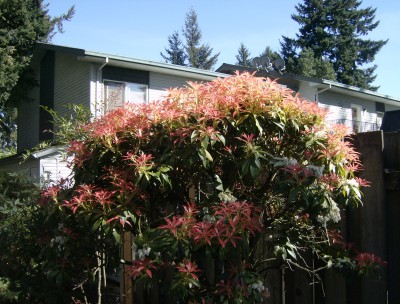 But there is no end to the eye candy. This is one of my primary enjoyments, living in the Pacific North West – the fact that the Springs are awesome. The variety and color – and the smells, yum – make it something else altogether. Here are examples of local trees, destined for fame:

When things go bad in the Cherry Tree prunage dimension: (Or – Why not plant something else?) 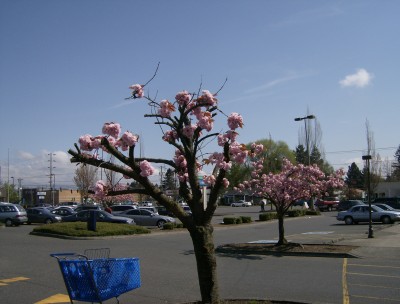 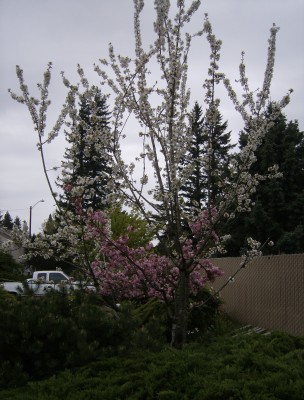 OK, back to the serious stuff again – we don’t need a real life rhubarb 🙂 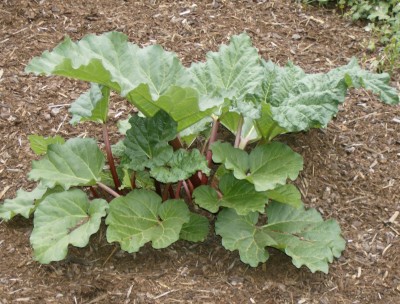 Here’s a delightful mess of bulbs and perennials we’ll be watching develop. 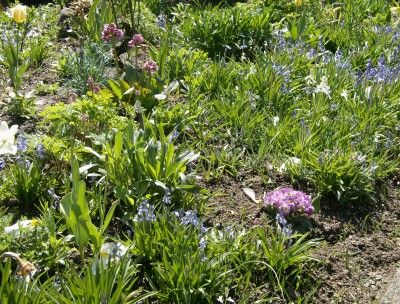 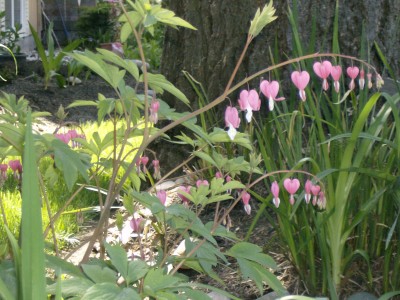 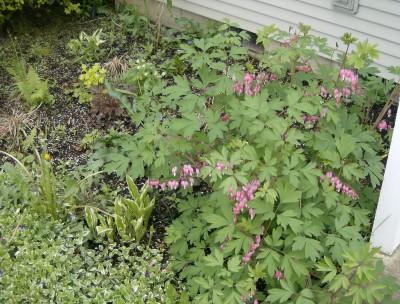 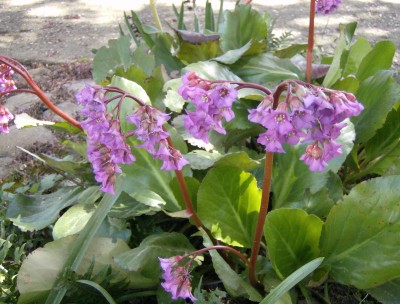 This may seem striking in its lack of pizazz but it is a Trillium – not easily transplanted at all. Although a native to the North West, Trillium just aren’t seen around finished landscapes much. Like many natives, they thrive where they are – usually shady forest environments – but they really resist transplanting for some reason. Same with many local plants, such a ferns, for example.

When I got busted  😉 taking pictures of her lawn, this lady, a postal employee with her own route, said “Well, when I moved in, they just grew there. The people who had the house before me said there was lots of them – all volunteers – and they had a devil of a time trying to keep them out.” Thank Goodness they missed a few. This is a fave woodland plant of mine and a dead surprise, seeing it in my ‘hood.

Incidentally, never having been a cub reporter, “getting busted” taking pictures of yards one admires has meant making new friends. I feel like such a publican. Or is that pelican? 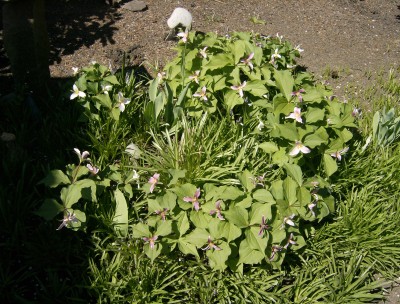 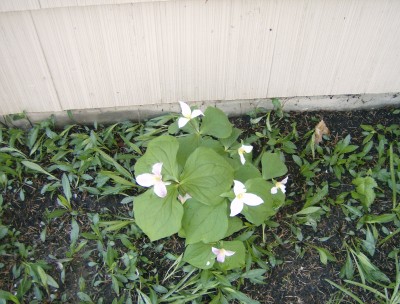 Here is some Soloman’s Seal with a nice copper Coral Bells behind it in a very cute small landscape in front of a local office building. Last year, I planted the giant version of Soloman’s Seal, which gets to about 4-5 feet high – just outsized and outrageously profuse as well. This one here is a whippersnapper but is putting up a nice front. 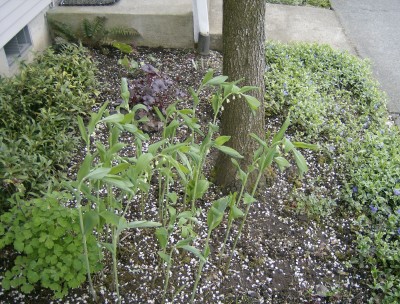 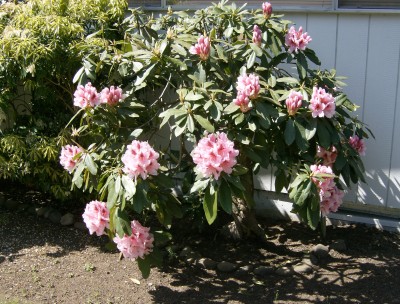 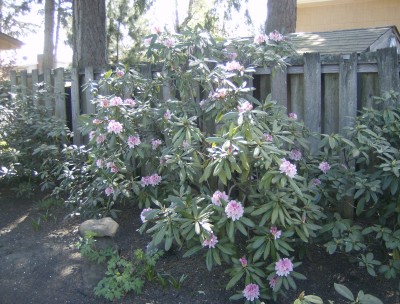 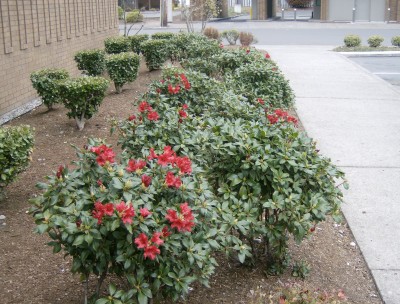 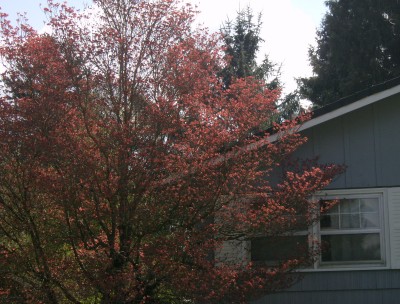 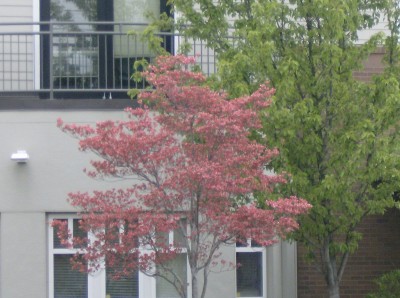 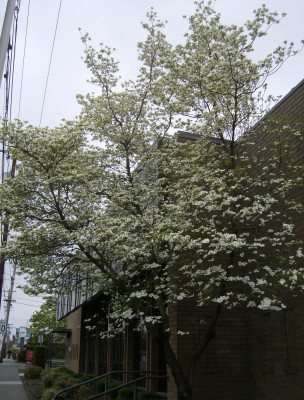 This is one of those Portland Specialties. As home to an amazing number of nursery suppliers and growers, Portland also has a fairly astounding number of bizarre plants and species – cultivars and hybrids nursed along by nurseries or even discovered here. From Weeping Spruces to Weeping Sequoia to variegated dogwood, Portland plays around with them all. I have always been a huge fan of variegation – whitish accents on standard leaves – and this Dogwood here may just take the cake.  As a variegated pant, this gets my vote as most “ghostlike” in the entire history of Planthood:

We go from this: 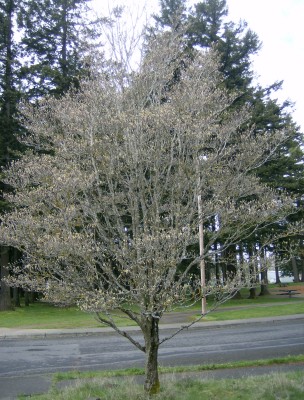 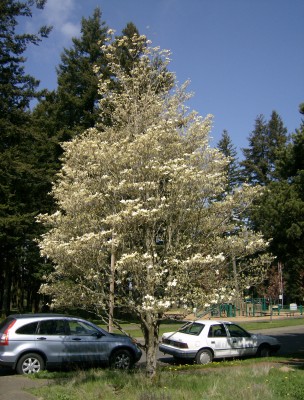 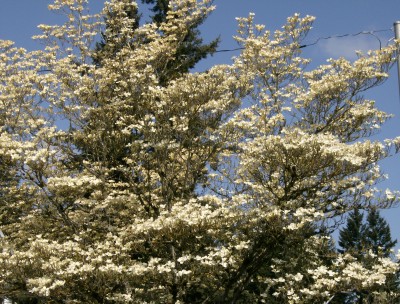 Here’s the latest report from the Cherry sported out front of the local library. The blooms are so profuse, they have literally broken a couple branches: 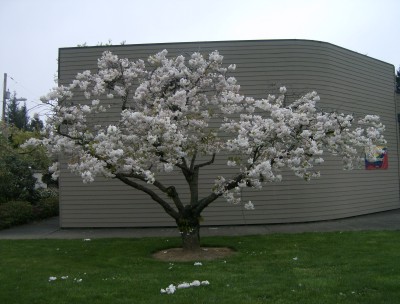 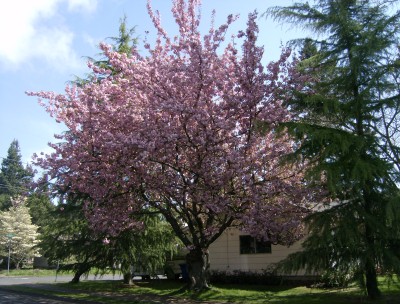 Care for some Pollen? 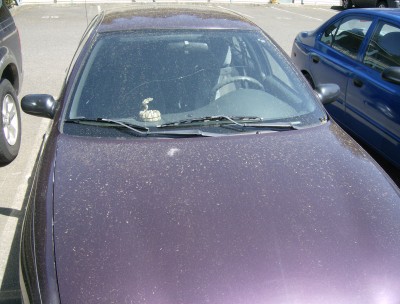