Interestingly, this was written in 2009, revised in 2011 and left untouched. I kind of feel no need the change anything – even the cold part, lol.

I’m on a small story-telling bender. This one is recirculated yet again, for the reasons I outlined dealing with my post speaking of my experience with 100 sticks of dyanmite and landscaping, a couple of posts below this one.

Fortunately, this post here has abundant rhododendron pictures, which was the impetus behind the posting in the first place, until I wandered off into the personal. This is also important because it is freezing outdoors, lol. I mean, not a little.

(It is all of 7 degrees here in Louisville, Kentucky, as I write this. It was a balmy 27 yesterday at times,  so I am more driven to see something to mitigate this Winter pain. My stay in Louisville has been marvelous from a strictly people aspect. Taking care of my Mother is like – well – it IS actually – a walk in the park. No stress, lots of family for a change and my peripatetic daughter is in classes in San Diego. Life is good – if freaking cold. And it is cold. I do not much like it, lol. Let me rephrase this – it is dreadful. I am far too ‘West Coast-ish’, if that’s a term, which 42 years there would do to one. Plus, we get another few months of this, unless Global Warming gets it done!

This post was composed in May of 2009. It is a long one, filled with pictures of flowers, lakes, sun, ducks and some writing about someone I don’t mind reposting about – a fine person. Just to keep the Springtime vibes alive, read and I hope you enjoy:)

“Extravagance” is the term I am so often set with concerning Rhododendrons. Like the Proteus plant, the simple size, girth and literal glamor of the bloom have few peers anywhere. The profuseness of a Rhododendron when in bloom I honestly believe has no peer anywhere in Nature. I love so many plants – they have been my stock in trade – but this one hovers in another sphere of general gorgeousness. 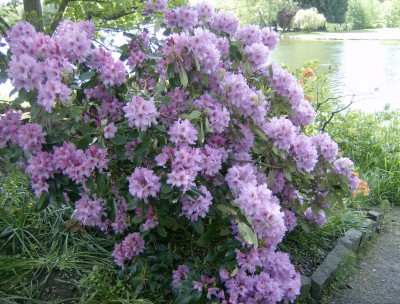 In the Northwest, there are rhododendron gardens all over the place. This week (May) in Florence, Oregon – on the Oregon Coast – there is a Rhododendron Festival, a full-fledged Rhodie fest complete with parades and displays and thousands of believers. Of course, everyone loves a party – so there is that. It’s been a long winter here – so there is that as well. But they’ve been having this particular festival for long years now. Love for the Rhododendron is not new here. 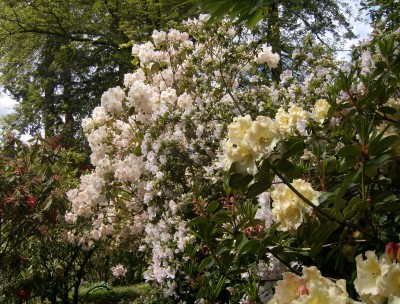 For purely selfish Photo Contest reasons, I add this earlier-blooming item here. I can’t imagine it not “belonging” anywhere, frankly. 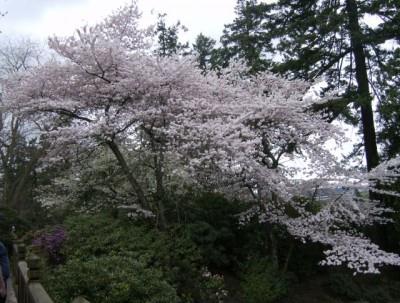 When I lived in British Columbia, naturally a mainstay for visitors was the trip over to Butchart Gardens in Victoria – a world-famous garden and rightfully so, rich indeed with its own stash of thousands of rhododendrons and azaleas, like this Crystal Springs Rhododendron Garden in Portland, just 4 times bigger and ten times more groomed and cultivated. 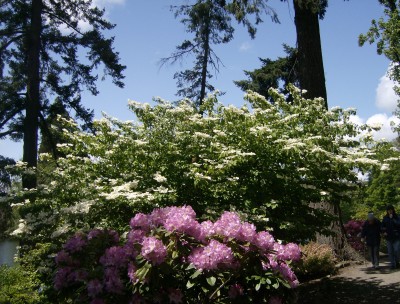 Naturally, there are plants other then Rhodies to slake the thirst for extravagant beauty. Take these pictures, above and below, of Double File Viburnums – how those branches seem to be wearing epaulets of blooms down their long arms, making them appear to be wearing instead of producing them. 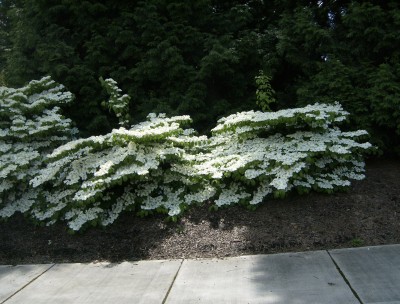 These are somewhat groomed for the appearance, yet this plant casually shoots off these blooms in a very regular fashion no matter how determined its pruners are to show off. 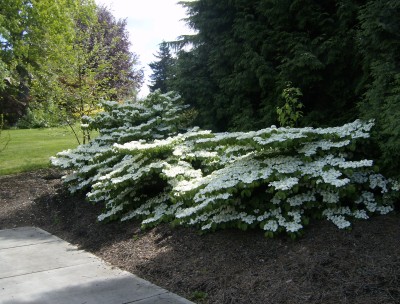 Other places in British Columbia and Washington have rhododendron festivals. And many, many other places have small parks – often made by devoted Rhodites (my newest shiniest original English! 😉 ) on farmland or just a once-open bit of land where someone tinkered themselves into some stunningly magnificent park, for which they collect money to visit and for which I was always so grateful to pay, just to see those exotics and bizarre rare species of Rhododendrons which eccentrics would specialize in. These were once virtual Hobby Farms, now ranked as parks. And there are more than one thinks. 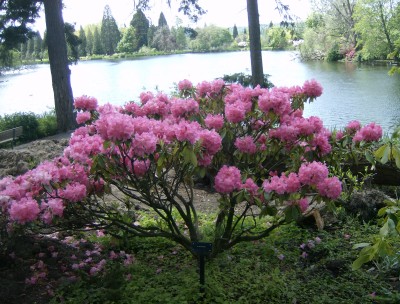 I recall landscaping an estate in BC – 10 acres set in deep woods with 2,000 year old Douglas Fir stumps whose bodies had been felled in the original flurry of construction at the turn of the 20th Century, filled with a gassy pitch and crumbling peat-like deteriorated cores. One ravine near the home was particularly suited for Rhodies – deep shade with some dappled sunlight. I resolved to fill it with my own brand of a similar park but, naturally, budget concerns worried me immensely. 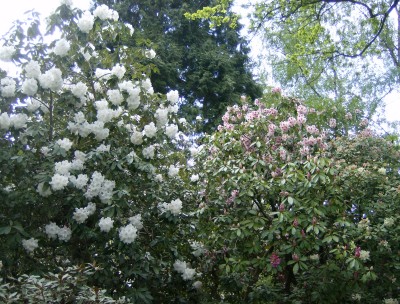 I consulted my usual nursery and had a line on some great buys of very small starter rhodies – with, naturally, a very restricted base of species and color. It weighed upon me as I drove the back roads of Langley and Surrey, BC, which was where my project was located.

While driving, I happened across a home – just caught by a glance out to the right of my window – where it appeared someone had themselves what looked like their own private nursery. I was curious and always looking for deals and I knew how cash spoke to growers – always subject to the whims of their small market of buyers. I braked, reversed and drove into the drive way. 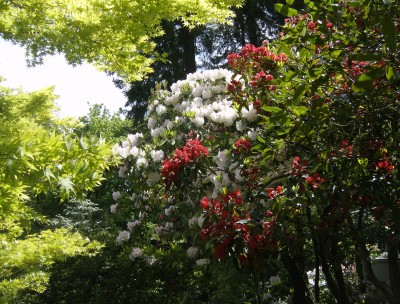 As I drove in, I noticed a dilapidated older car parked, its door open and some cigarette smoke wafting from the driver’s seat. Walking up the small rise, I also noticed that as far as I could see, the entire nursery was of Rhododendrons. It stretched at least 100 feet to my left and was a good 20 rows deep of large – some huge – rhodies. This was a gold mine of specimens – gigantic and mature plants – and a variety to literally die for. I was nearly shaking after beholding all this because I really knew what I had found. (Hey, you had to be there.) 🙂 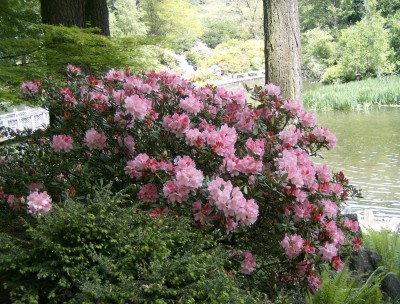 The man in the car was very old now – 77 – a Russian immigrant whose wife was cooking inside and whose relaxation and privacy included this car to a degree I speculate was pretty intense. He coughed and looked up as I stood outside the door of his smoking chamber and gave a big smile. He was delighted to have company. It made a great start to a long and wonderful relationship. How no one had found this man is still beyond me to this day. I am positive he never would have sold Plant One had I not stopped by – or some other young and enterprising landscaper – there is that. 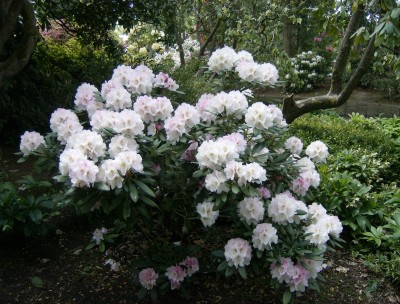 He had a hothouse where he was cultivating starts – some from seed – and always had. He just loved Rhododendrons. As we ambled around the stock, his 6 foot 6 inch frame would bend over at a particular plant and I would get its very history. He knew each plant like children. It put a near religious reverence to the entire operation, I swear. Some of the newer Rhodies were 3 feet tall, lined up before being separated later to accommodate for their later growth. Meanwhile, some of the others were a true 8 feet tall – worth thousands of dollars each and too large even for me to relocate. I was boggled beyond belief. 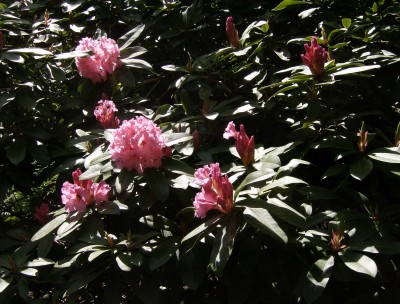 He asked if I wanted to buy some of them, getting the hint when I told him I was a landscaper. Naturally, I said yes and awaited his pricing with some trepidation. “Which ones do you want?” he asked. When I showed him a 5 foot high plant in full bloom which any nursery would charge a full $400-500 for, he looked at me, squinted in the sunlight and said:

I laughed and said I would take it, of course. “Well, how many do you want?” was his next question. He then ran off the list, pointing to each plant and never going above 50 bucks for any plants – even the most extravagant and large. It became almost embarrassing and there was no way I was going to rip him off after the efforts he had put in. I gave him a figure that doubled or tripled what he had asked and he started blinking, counting up the dough. I also said I would begin with 100 plants. There was no way I was leaving that field without buying as many as I could. 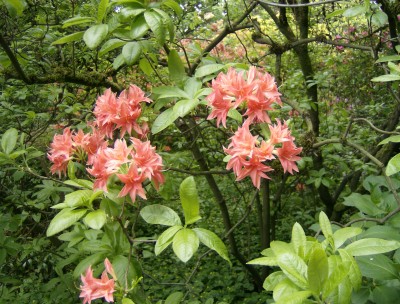 He was delighted, but I was not done. I wanted to know why he wanted to sell them at such discounts after all the love he had labored over to get them started. I asked him point blank. He was so easy to talk with, it was crazy. We had definitely hit it off.

“Well, I am dying. I never wanted to make some big amount of money off these plants. There was a landscaper I used to sell 3-4 to now and then and it would be some cash for us. I spent a lifetime logging and doing the garden here just became a lot more of a hobby than I thought it would. We had all this land and it’s great land – perfect for Rhodies. If I could make sure the Missus has a few things before I go, I would be real happy. Heck, the land here is worth enough to retire on if we sold it. The Rhodies are just sort of gravy.” 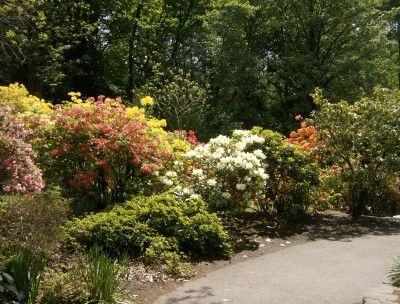 He had a heart condition which gave him about a year to live. He had found out earlier that very week, it turns out. It’s funny how events gravitate towards one another in life. He looked at me with some real big eyes, smiled and knocked me over:

“I was hoping you would come by,” he said.

I felt overwhelmed by events on this boring Wednesday afternoon as I made my way through another torridly-paced business day, lit up on vanity, career concerns and selfish business worries like a junky. Then this tall Russian elderly drink of water delivered that line which I have never forgotten. Among my life’s most miraculous events, I always reflect on this moment as one of those. The suddenness and raw clarity of a synchronicity of need and of something more – maybe just Love itself – made its way deeply into my heart like a bolt of lightning.

A few tears streamed down my face as I drove home that day, in a bizarre mix of gratitude, joy, and simple awe at the outrageous unthinking compliance of Fortune itself. Oh – and I made me a great friend. That should be assumed. 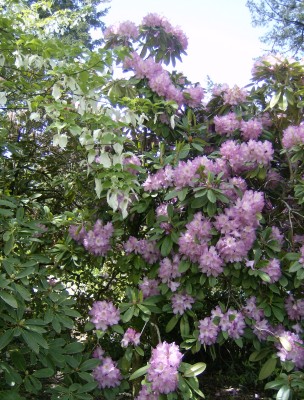 Well, he lived for another two years. I was young and just starting out in landscaping but I had enough dust to provide his grateful hands with about $6,000 in purchases and – Man! – did I ever make out, too. I also bought one of those 8 footers. It took all day for 3 guys to transplant it at the new spread. The timing was stunningly apt – it had just begun blooming and, once planted, was in full flower when their homeowners – a local builder – had their house-warming party. Their gratitude for my work was pretty much off the charts and I won an award for the job – my first ever.

Today, that plant might fetch the entirety of what I paid for all 300 plants I got from Vladimir. 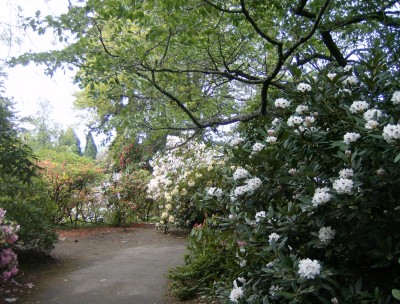 I did not plan to write all that but it’s one of those “Rhodie stories” I have that seemed natural to share. After all, one good turn deserves another, doesn’t it? 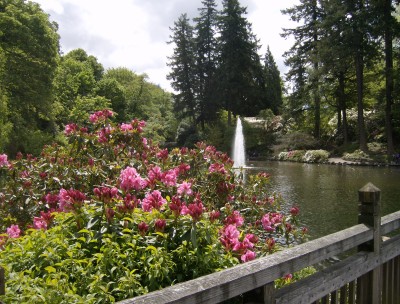