Which picture below is the landscape that has irrigation? One of these pictures is irrigated by buried pipe and the other has no irrigation supply whatsoever. 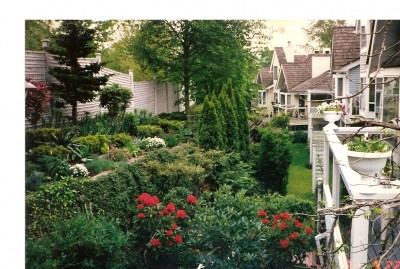 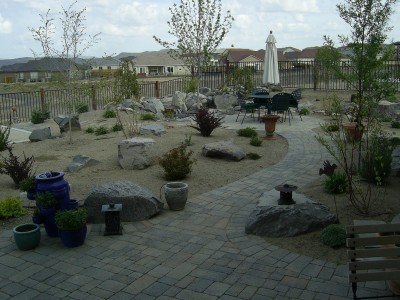 If you answered the second picture, you would be correct. The top picture – from Vancouver, British Columbia – is from a project we did many years ago, obviously, which has performed spectacularly and grown thanks to the local climate – which is quite wet.

The second picture is from Reno, Nevada – smack in the middle of the Great Basin high desert and not quite a year old yet at the time of this picture. It is very irrigated, by means of buried pipes in the ground and small emitters which produce a designated amount of water to each individual plant. One thing about planting stuff in Reno is that, if somehow the watering regime is not right, you will find out fast! A pounding and relentless Sun mixes with an utter lack of humidity to expose any deficiencies pretty much immediately. For the record, here are later looks at that project, 2 years later: 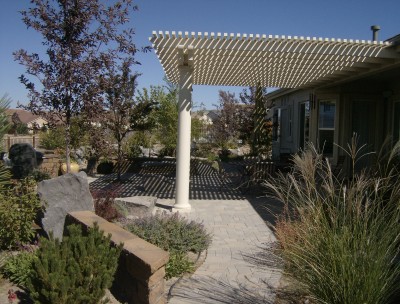 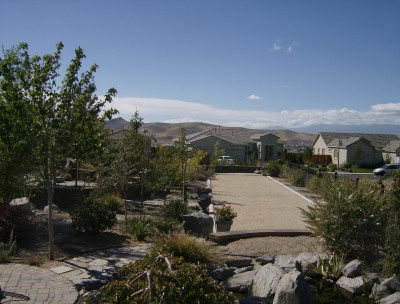 This latter property is completely irrigated. Yes, as time has gone on, additional emitters were added, adding marginally to the water bill. Many times and in many places, this is the case, especially in neighborhoods such as this which were subdivisions, completely terraformed by excavators and bulldozers to conform to planned needs. Other places in this dry region where drip is used – in, say, homes built on more established existing soils, sometimes the drip irrigation merely acts to get roots to a water table which literally takes over from there. In these cases, the irrigation system, at least for trees and for many plants, can take a hike.

Here is a picture of what a project looks like during the course of installing drip irrigation: 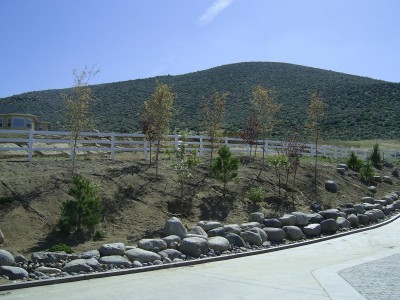 Notice the black pipe coursing throughout the plantings. Eventually, it will be buried, as will the smaller distribution tubes that carry a certain pre-allocated amount of water to the roots of the trees and plants. One can actually determine precisely how much water is used over a period of time by use of these regulated devices. Put on a time clock, we can say, for example, that this group of plants has 200 different plants on it. Of these, the trees will have 3 – two gallon per hour (GPH)* – emitters apiece. Otherwise, the plants themselves will have one 2 GPH emitter apiece. (Note: some of the smaller ones will actually have 1 GPH emitters).

Inasmuch as this big project had some 4 planting zones of a similar make up, we can see that it would use around 1,000 gallons of water per day.

A Caveat: (Once again, this is a 5 acre project, somewhat densely planted. Yes, it must be nice! Bear in mind, for this guy, he had his own well, too, so much of his water went literally right back down into his own water table.)

For the project above this one, where we compared irrigation versus non-irrigation, the numbers for one zone listed here apply to the entire yard. So what is 280 gallons? How does it compare to our daily uses of water, per se?

As can be seen, the “hardship” of water can be lessened by the proper use of the right irrigation materials. Put another way, if you let a hose run, it puts out around 8-12 gallons a minute. If you have your garden hose running for an hour, watering plants and trees, you will have used 2-3 times what that drip irrigation system supplied to all those plants and trees. The equivalent to using the drip system for 40 trees and 160 plants is to taking 2 baths, flushing 6 times, washing 2 loads of clothes and running the dishwasher.

Now, grass is thirstier. The project below had 12 sprinkler heads using 2 gallons each per minute. They often ran it for upwards of 10 minutes. Just this lawn alone, therefore, used 240 gallons a day! And that’s when they only watered it once. (Many times, they ran it twice.) 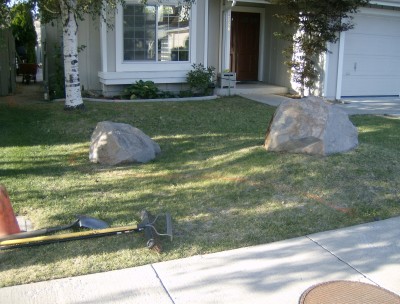 They asked us for a method of keeping some lawn but cutting down costs of watering. By using alternative materials instead of lawn, such as brick pavers and by creating planting beds, we were able to save them substantial watering costs. For one thing, we used low trajectory nozzles on their sprinkler heads which minimized how much sprayed water was lost due to wind – in Reno, this is a concern. For another, we placed them in better spots and used a nozzle that has been developed which uses less water in general, yet still delivers to the exact spots they are designed for. What we ended up with was a landscape which cost them 2/3 less money on watering and yet still had some lawn. Here it is: 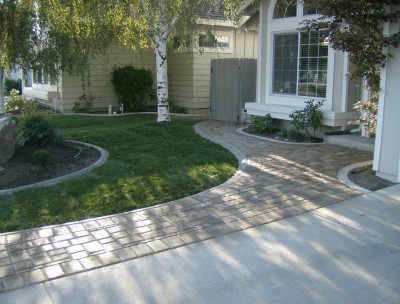 Any more, we consistently convert what once were huge swaths of grass into more manageable and less water-hogging landscapes. What is most bizarre about the entire scenario is how friendly one can get towards plants and flowers and – frankly – how much more interesting they can be, done right. Irony of ironies, I suppose, even installing a water feature using water recycled by a pump can reduce a water bill. 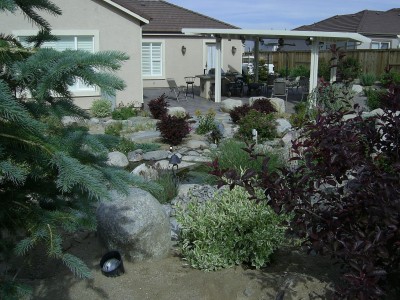 There are design rules which have also adapted to the new realities surrounding watering shortages and wiser use of this precious resource. That’s what I will address next.