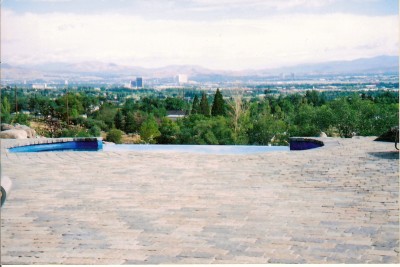 It wasn’t easy, for one thing. Asked to construct this Infinity Edge Waterfall by the owners, Bo and Sandy, it joined a pretty large laundry list of items they were after. This was their “dream home” and they had saved and invested to get here and they most definitely had a “gamer’s take” on all the bells and whistles they wanted. They both had their own sets of wishes, Sandy’s more towards the planting end, actually, which made she and I friends. Bo, however, really wanted some hot stuff! We made him a Grotto – seen elsewhere in this blog – and he wanted a huge back patio with this Infinity Edge thing cut inside it. The pavers were of a really very cool – tumbled – variety and they already had them more or less picked out. Here they are at the front entry: 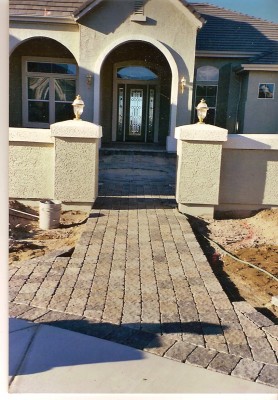 When he mentioned the Infinity Edge water feature, he had me. I had wanted to do one of these for long years. Negotiations went smoothly. Ach!  I will feature the entire yard soon – this was your basic mini-Estate. Lots of stuff going on here.

The other deal was that this was one “bony” yard. Truth to tell, there were approximately 800 yards of boulders and rocks parked there from excavations all around the neighborhood and which he had asked for earlier. Needless to say, in subdivisions like this, a builder is more than delighted to get rid of his overburden after excavations and, believe me, one shovel into this particular ground and you encountered rock. They were approximately as common as air. So we got a bazillion lungfuls of rocks.

Nevertheless, onward and upward we strove. First, we dug a hole. Ta da! Halfway there!

Then we began constructing the form. We would consult on the placement of the water edge by referring back to the dining room table and living room windows. From the living room window, one could – ideally – peer over the edge and see the lake down below. 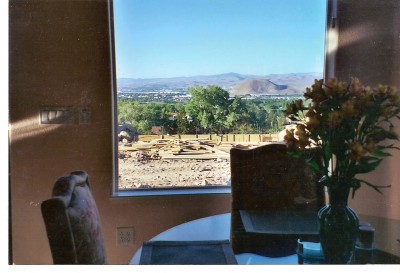 The effect was water-into-water, sort of. So this determined our height, along with the patio which began at his circular patio nearer the house, but just stepped down a bit. The edge of this would determine how far down that step – or steps – would be. So we began. 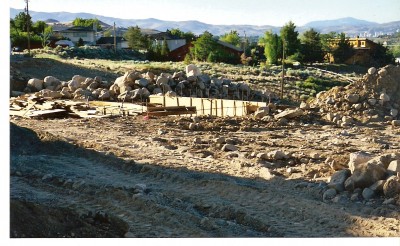 The trick would be not only in getting the heights right but would also involve insuring that the form itself would stay there while the pouring cement was pounding it. We used a high classification (4500 psi) cement for this, to insure a better product in general. There would be no minimizing the cost – no short cuts. This was to last a while. And a crack would drive anybody crazy! The pile to the right in the above picture is the excavated dirt, by the way. The pile of rocks on the left are just a few of the jewels we had to play with, building extensive walls and that grotto.

Here is a look from the angle in the very top picture, more or less:

I personally drew out the form’s shape and we had painted it along the ground at various junctures during the set-up. We constantly checked and rechecked our levels, needless to say. Here is the form work up closer, getting to the point where we could refine the shape: 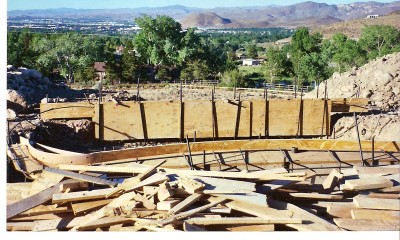 The rear “rim” – the swerving piece sticking up 4″ is built on plywood, by the way. This was a cantilever – a protruding cement pad extending out into the pond about 3 feet. Here’s another look where it shows just a bit better: 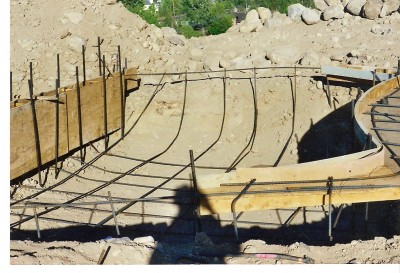 Please forgive the photographer because these were all taken after a day of work. Anyway, I think we are getting the point. We basically intensified some of the rebar, tying it all together and basically more or less doubling it up from this picture. We also added a light fixture under the cantilever – I mean a big one, too – a virtual headlamp which we had to supply a waterproof seal for. We poured the cement successfully in a very nervous day of work, finishing it as fast as we could owing to the temperature complicating matters – being around 100 degrees. Finally, it was finished!

We ground for a few days with electric grinders, finishing things inside and out of the cement edifice, smoothing it and insuring room above for the pavers which would sit on top of the completed concrete including the edges. It was quite the deal. All the hard work paid off handsomely.

There was also the origin and placement of the recirculating pump to consider, down on the bottom. Needless to say, along with the head lamp I mentioned, a pipe for the water – in this case a big old 4″ pipe – required its own leak proofed inserting into the form to supply the cascade. It looked something like this: 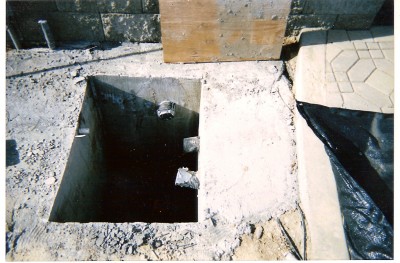 In the end, speaking with Bo, the notion of a clear electric blue color took on more and more resonance for us both and we decided to use that color with our marine enamel application. Here is a look back: 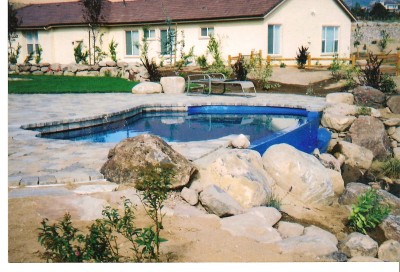 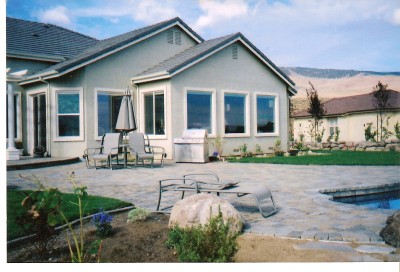 And here is a look from the side: (Note the trough at the front edge. Very subtle, this collects all the water spilling over the Infinity Edge and focuses its flow into a more naturalistic waterfall which cascades down to what results as a very secluded patio. The dark stains in the dirt are from Bo running his irrigation for too long. The buried drip irrigation is the culprit. After his first month’s water bill came in, he ratcheted it down some. He was producing swamp-like conditions in a desert! 😉

We also applied mulch as time went on, removing the rather unsightly appearance and the reminder of such rocky soil. The rocks alongside the stairway were also reset deeper and a bit more ‘organically’ – they were freshly-supplied at the time of this picture. 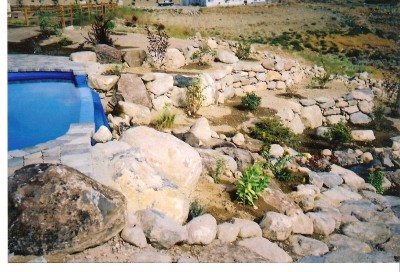 From the bottom, looking up: 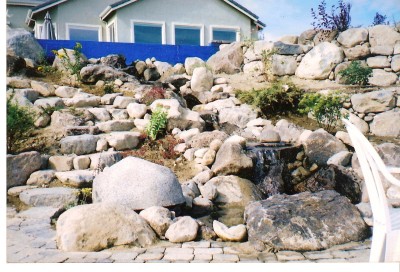 And here, from the top, looking down, we now see the lake next door, water-to-water, as it were.: 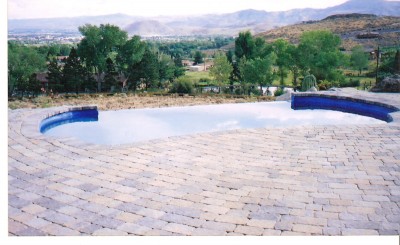 Needless to say, the blue color was an excellent choice. The sky looks terrific reflected in it and – at night – the cool electric blue which is as bright as it can be with a strong lamp using an additional blue filter – looks positively electric and fascinating in general.

Bo was pleased as were we.