Just because we are heading towards a general water shortage – local exceptional climates notwithstanding – throughout so much of the world, the possible impact of a water garden does not need to be ignored. In fact, once a water feature is up and running, the recirculating nature of them all means that the same water is used over and over again. Yes, depending on the location and the size and nature of the water feature, water can be lost to evaporation and need topping off. But I have lived in some beastly temperatures where I installed many of these and I can readily say the loss from evaporation is not substantial whatsoever.

Believe it or not, I often term these as alternatives to lawns.

Here is a look at a larger water feature we installed in the woods. Most of the pictures taken here were taken the day we finally finished the project. There was no hole to begin with – in fact, we felled large trees to make room for this pond and trucked off the roots. It was the same sort of forest it is now surrounded by when we began – we just claimed the territory for ourselves and the client’s pond. Note the creek of running water spilling inside from the small hill behind. This recirculated water and cleaned and oxygenated it by running over a long series of pebbles and stones in the creek. 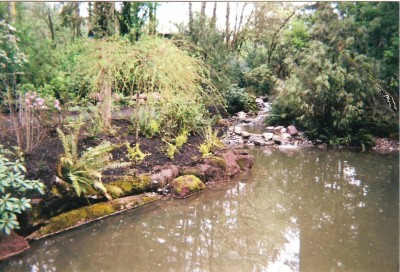 Here are a couple of different looks at the creek in the above picture. The intense shade of this project made many things possible – a larger body of water which would evaporate far less than one in the Sun allowed us to forget about the potentially nasty effects of algae as well. After all, the Sun is the primary grower of algae. It did imply some extra maintenance dealing with leaves and droppings from the local trees, but that was actually fairly easy. The main thing was how the water cleaned itself in our creek, receiving oxygen in quantities which disallowed too much algae. Honestly, in spire of the size – which was huge – this was a very straightforward project. 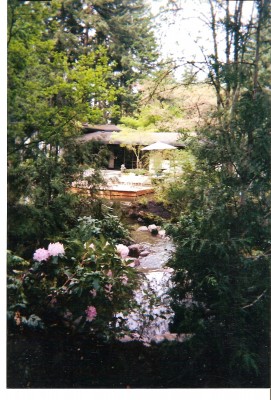 A bit closer up, about midway down the 50 foot creek:

Here is the look from back on the deck, looking out from the house towards our creek. The slate-like surface is actually what is called “Bluestone”, a gorgeous and richly-textured stone of more like a granite appearance. The wooden deck is visible from this perspective, and it leads out into the water at the end of this portion of the deck. 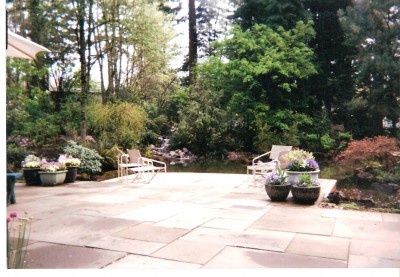 This view is from across the pond. Note the deck – it is suspended an inch above the almost always-placid water surface, made to look as close as it actually is. Later, lighting was added below the deck for an unreal but rich lighting experience at night for party-goers and just the enjoyment of the clients. It was hugely effective. 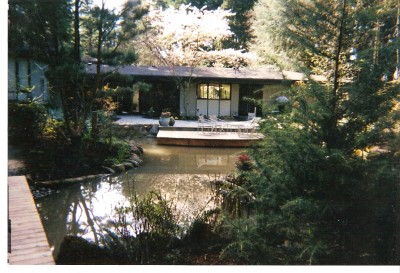 Yes, that is an island in the middle of our lake. That was easily the toughest part of the entire construction and on which caused me a sleepless night or two. Don’t do this at home! 😉 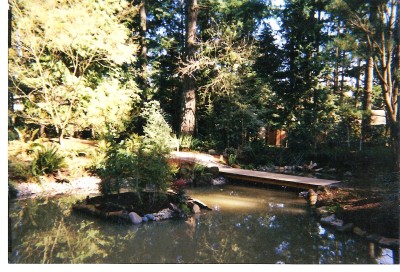 The bridge is the link between the home and the woods across the pond. The water on this side of the bridge was very shallow and represented an effort at creating a sort of swampland/wetlands area. We planted a few wetlands plants – sedges, a bamboo – inside later which grew at a fairly astronomical rate. Little did we know we had created the perfect wetlands. We had to return and thins it by about 80%! 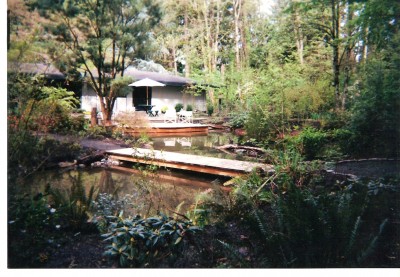 Below may be my favorite perspective of all at this project. It takes advantage of the water’s placidity to offer some really fine reflections. I absolutely adored the mirror-like quality of the water. 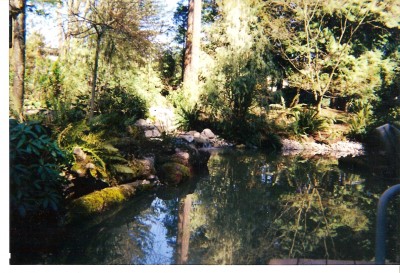 Once again, we got very lucky in the finishing touches. The woods around us were rife with all sort of great things to put at the water’s edge, making this place look as if it had been there forever.

14 thoughts on “Designing Water In The Landscape”