Walls in any landscape can perform more than one single purpose. Sometimes, as in this picture below, they separate elements of a landscape and add a certain orderliness which would not be there without those demarcations. As a predictable and handy side effect, they also are fabulous places to sit when “plagued with” overflow party-goers. These particular blocks and their caps have a rustic look which well-matched the informal ranch-style home of the owners. Their neighbors were fairly distant and the environment was wide open and range-like just outside their fence. Something more formal would look exceptionally out of place.

Note also the business of the lighting which we provided access for by drilling downwards and pulling the necessary wiring from the house. Along with railings, iron work and any number of possible additions, the lighting here adds a value-added and experience-enhancing element. The totally adjustable rate of light made for romantic or well-lit evenings, good for watching stars or for some more focused work. 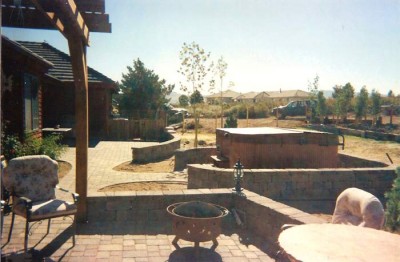 Other purposes for walls – and probably without doubt the most common – deal with terrain and grade changes. Steeply-sloped land causes some problems, not the least of which is the probability of erosion and the subsequent messes after torrential rains. Most of the prefabricated wall systems are designed to withstand the hydrostatic pressure which builds behind the walls when things get wet. A saturated soil still feels the gravitational pull of the water inside the earth and that water still acts like a river – everything wants to run downhill. This implies pressure, simply put. In fact, it implies one heck of a lot of pressure. Nothing, in the end, quite matches the power of water in its urge to break through to release.

We therefore work with this fact in every construction. In the rainy environments I have lived in, such as Portland and Vancouver, BC, the task  in many ways is easier, actually. Unlike Reno, the rain is predictable, even in the amounts – lots! Reno, meanwhile, can wait 7 months between rainfalls. Then you often get snow and rain – in order! All of that badly-needed precipitation is generally packed into about 3-4 months of time – Winter. And even then in strong deliveries. What is first involved, then, in any wall system, is the base.  Secondly, is the drainage. But we start at the bottom. If it is not sturdy and perfect, the entire edifice is not sound. And, yes, they will most certainly collapse.

Here’s typically what we begin with: 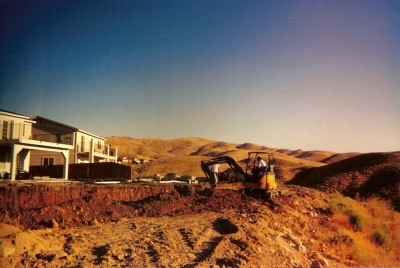 The initial excavation includes all the computations we arrived at in the design process. Where the drain pipes go, what to do with the water, how high the wall will be, all that. It’s always something else watching it knit together.

Once the wall is excavated, we bring in base rock, very similar to how we lay pavers. Where the blocks will go will have nearly a foot of base material to provide that sturdy foundation. Actually, we do this on all our wall constructions, no matter the material. Even large rocks, we like putting in a compacted base underneath. We will pound the loose ground under a construction until it is rock hard, then back fill or lay in the material. Even railroad tie retaining walls require the same. This picture is a small part of a quarter mile’s worth of double and triple stacked walls in Vancouver. Under each one of them, we added gravel and compacted it like crazy. Now 23 years from the time it was installed, it has not moved an inch. 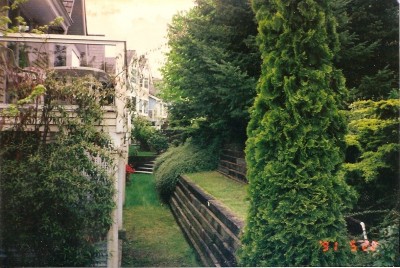 The draining of the walls is probably number on on the Importance Index. Even a dry climate gets rain – and sometimes then, they are torrential. It can make life weirder.

Here’s an example of how we drain even small walls which have hills and thus wandering water building pressure behind it: 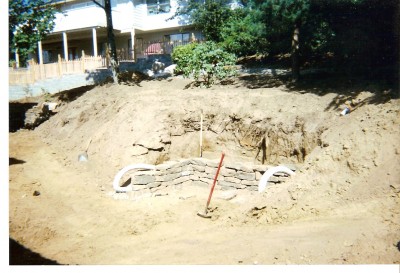 Here is an example of drainage, right from the first. This will be a walled enclosure to hold a spa/hot tub. It will sit nicely into the hillside, providing privacy and some muted sound. The fabric-covered pipes will tuck in around the base of this wall at an angle that conducts the water away. From the top of the wall, we put a foot-wide gravel-filled trench close to the wall itself. This allows the water to drip down into the pipes and then get carried away. Since we also installed a paver patio on this project, we managed to trench ourselves and guarantee a proper course for the water by putting solid pipe underneath.

Here is what it resulted in: 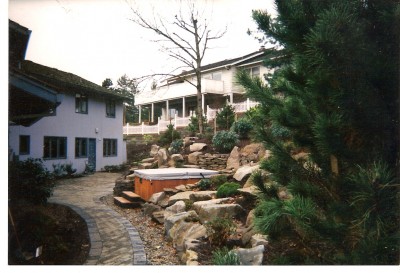 The wide array of rocks, concrete products and wood materials available for wall-making is pretty impressive. In most cases, the materials can be specified to match the desired ambiance of an overall project. From an aesthetic perspective, this is a total plus – I mean  just having that range of possibilities. But from a practical perspective, there are only a few “right” ways to build them.

Prepare the base well. Drain the walls. Take the water away or watch them fall down.

Remember the first picture up there of excavating? Here’s what it looks like almost done: 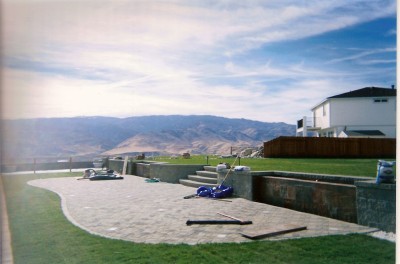 (pardon the incomplete look, by the way – the tarps, the bags of mortar – I have always had the methodology of completing work and then moving on. It’s only recently that I have considered I might want later looks at completed projects. I thus prove my standing as a contractor, lol. Not only can I be predictably late, I also forget where I’ve been!) 😉   Oh, and here is why this owner wanted that wall with few plants. Below is the view from his patio: 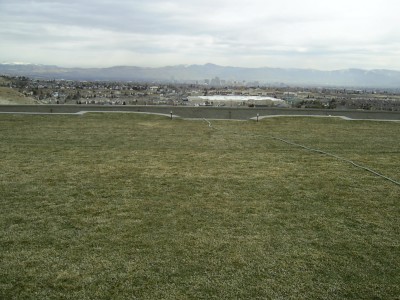 Another angle for this 270 degree vista of Reno and the distant mountains, looking South – he had a rare lot. An average house which he gussied up nicely inside, but one heck of a cool lot: 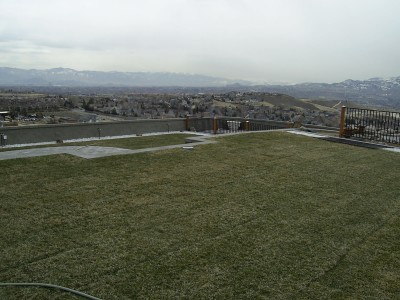 The neighbor to this project got into the act as well, lengthening the stay and complicating things in the best ways and so we ended up doing them as well. It actually made it easier because the neighbor had a great place to evacuate all the water. But we extended things and made stairs and a sort of a natural  finish by continuing the wall on the inside and outside. The curving wall at the end wraps around the neighbor’s property, complete with his own set of stairs. 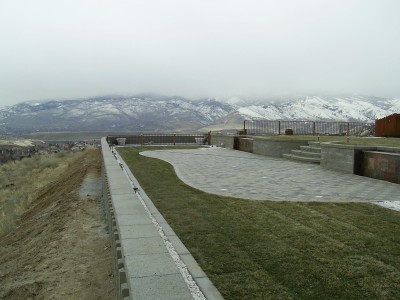 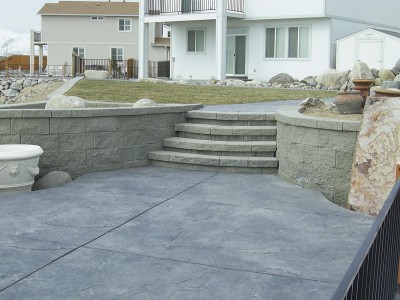 In case you wondered about the copper-colored tiles, they were actually water features themselves. Quite attractive and quiet, they supplied the virtual sheet we and the owner were looking for, all controlled from the house. With the lights embedded into the pavers and some nice underwater lights in the reservoirs of the cascades, this made a totally warm and impressive patio, fabulous for parties. Here’s what it looks like when running: 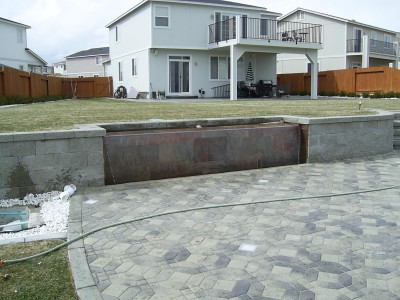 All our walls are way too interesting to do. For some reason, I get a real kick out of wall-building. For example, this becomes the picture following: 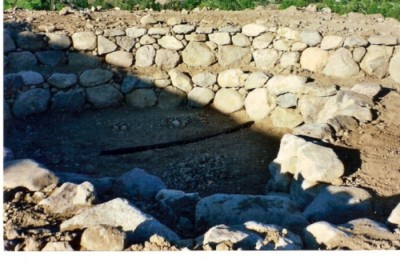 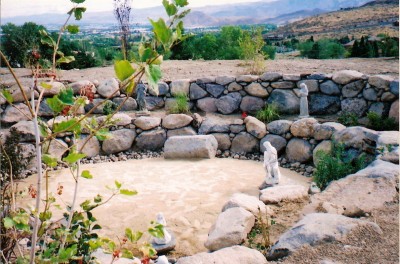