The above is a small cluster of 3  Sequoiadendron giganteum ‘Pendulums’.  We call them, more commonly, Weeping Sequoia’s.  They are hard by a local bank in Portland, of all things, and I have always appreciated them, hugely. Pruned so that human traffic can go and more freely visit their disastrous bank accounts – with some exceptions – they make an even more unique scene.

I have always been intrigued by plants and their various evolutions. I realize I share this with pretty much the entire breathing world, but their study and the events which have helped all plants to evolve into their current forms are just an amazingly democratic process, with contributions from the widest variety of people imaginable. Naturally, there has always been intent with many of these developments, but there has also been other factors – such as the capitalization on genetic accidents, for example. I was once told that certain variegated plants were remnants of such accidents. Whether this is true or not doesn’t really matter, either, because, in some cases at least this is definitely a viable path which found its way to our gardens. Here’s another look at our Giant Lurking Ghosts: 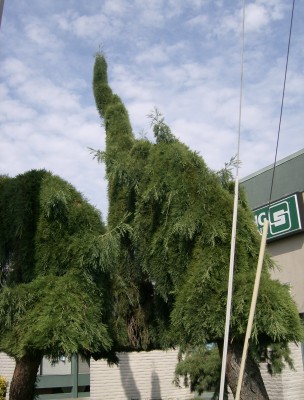 And another: (from the street) 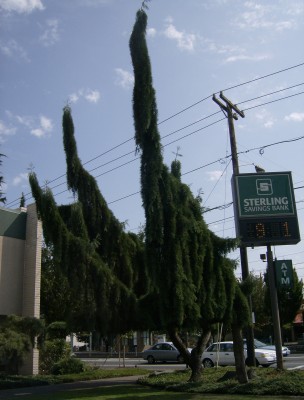 Weeping varieties of trees are no surprise to anyone. We have all seen weeping cherries, weeping birches and the likes. But my discovery of weeping conifers gave me a perfect opportunity to match permanent color with certain other design characteristics. For example, I almost invariably use a Weeping Atlantic Cedar near all my water features, and in particular around grade changes and falls. I just find the visual aspect of “weeping” well matches the motion and direction of the water and the terrain itself: 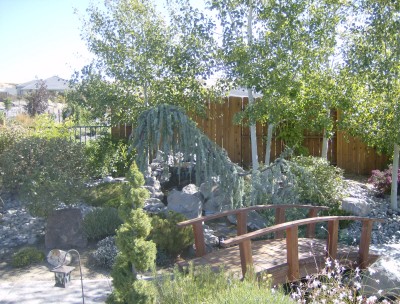 Another: (the red nursery tag is now gone from this one, 😉 ) 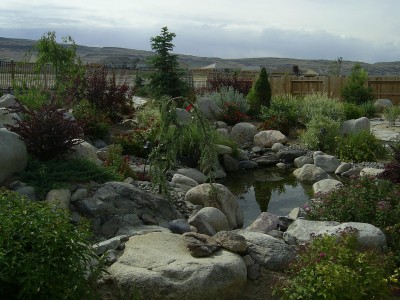 I find the sweeping weeping effects can alter the perception of a plane, visually. Not only does their unusual shape grab attention in the first place, but the perception of motion gets created – or enhanced. The illusion of motion amid the static floral and rockery effects  is the single most interesting effect in landscaping, to my way of thinking. Futuristic and sense-evoking, a good-looking weeping tree in the right place deepens and arouses the imagination. Below here is another example, on a smaller level, of a cascading effect with these Vancouver Gold Broom plants cascading at the base of this Japanese Maple, seemingly into the water. 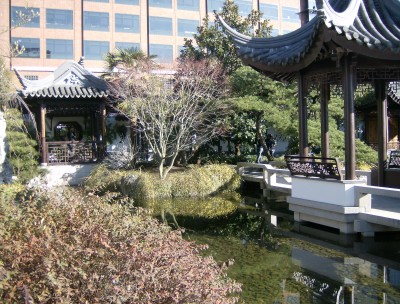 This little Weeping Blue Atlantic Cedar “starter kit” (below) has developed more than nicely as a blue background for these “bubble rocks” on a corner of a patio. In fact it’s  another significant element of color-matching, with deep greens and blue colors with water effects together, providing yet more depth and congruence. The motion of the cascading water is that of gravity-driven water, matching with the genetic disposition of a plant whose direction matches the inclination. 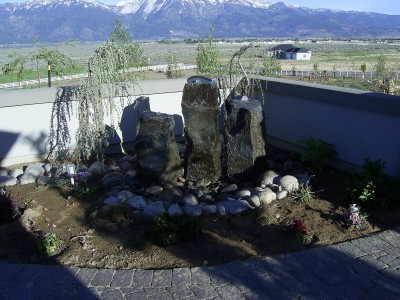 Here is something simple, but still effective, in a patio water feature, this one a Weeping Cherry:

All in all, I am obviously a huge admirer of this particular effect in garden and landscape design. I can’t get enough of these gorgeous plants, to be truthful. I’m even planning on a part 2 of “weeping stuff”.