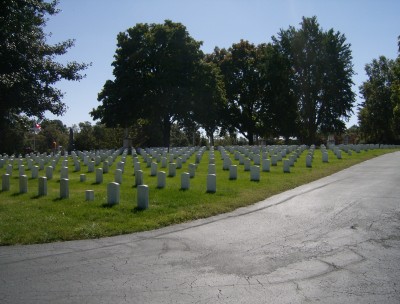 My trips to Louisville have nearly always included a visit to the Cave Hill Cemetery. It’s wide open expanses with those sobering small white soldier’s tombstones dotting the exceptionally green native Bluegrass never failed to evoke the tragedy and sadness which typifies warfare. The irony of Kentucky as a traditional Border State meant that there are sections here for both sides of the Civil War – a large Confederate burial section as well as one for Union soldiers. That’s what we see in the pictures above and below. 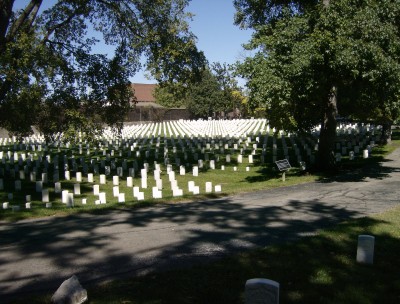 But there is far more, especially for a cemetery which did not begin as a “garden cemetery” as was fashionable at the time of its inception: 1846. It did indeed evolve into just that, of course, with gorgeous and stunningly beautiful trees planted in perfect locations – a product of the many landscape architects who threw their hands in at various times. Here is a blurb from their own website:

“When it came time in late 1846 to add the graveyard component to Cave Hill, the mayor and the city council apparently did not consciously set out to make a garden cemetery, which by then was a concept gaining popularity in the major cities of America. But, propitiously, they appointed a committee that selected a civil engineer who had firsthand experience of the emerging cemetery concept. Edmund Francis Lee (1811-1857) convinced the city fathers to utilize the natural features of Cave Hill which previously had been considered quite undesirable for burying purposes. To Lee, the old Cave Hill farm was perfectly suited for cemetery purposes. Its promontories would become the primary bury sites. The roads to these hilltop circles would curve gently following the natural contours. The intervening basins would become ponds or be planted with trees and maintained as reserves. The garden setting would be a natural backdrop for the lots and monuments and the cemetery would receive perpetual attention and could never be violated—stipulations never before provided. Here then was a place not to be shunned, but a park to be sought out for its beauty and the spiritual elevation gained from contemplating the collective accomplishments of its inhabitants.

In the Victorian period, personal wealth increased, as did family aggrandizement. The garden cemetery became the repository of symbols of success in the form of truly monumental art. The landscape gardener embellished the natural setting with exotic trees and shrubs while the marble sculptors and granite fabricators erected elaborate memorials to individuals and families. Cave Hill has been blessed by a succession of competent and innovative landscape gardeners, and Louisville has been a regional center for monument makers. The result is a rural, or garden, cemetery which has always been considered a model to emulate.” 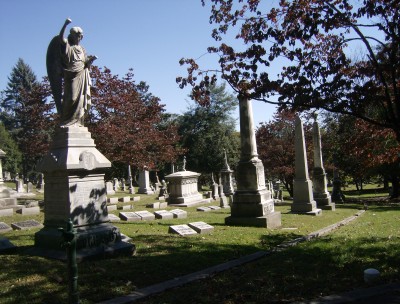 Gorgeous works stud the hillsides for veritable miles. Turn a corner and yet another fascinating blend of quiet and purposeful stonework greets the eye – dedicated to the dead. 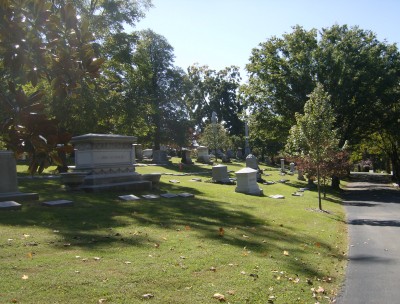 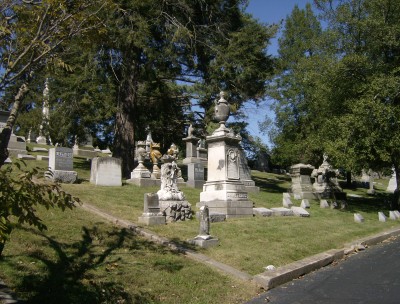 In the older works, we see great technique and marvelous forms created from stone. In the newer ones, we see that as well, but we also find bronze and metal sculpture taking place which captures the imagination. Here is a descending eagle alighting atop a headstone in a breathless and voluptuous silence only a cemetery can deal, pregnant with meaning and even history for those for whom it is intended. 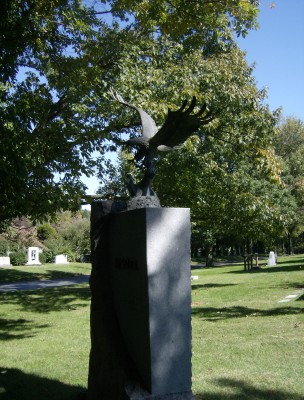 Here are some older headstones, reflecting the 19th and earlier 20th Century’s artisan ship of all these stone creations. This one has to be enlarged to fully enjoy. There are Peace, regret, idealism and a very evocative sadness in these absolute works of art. 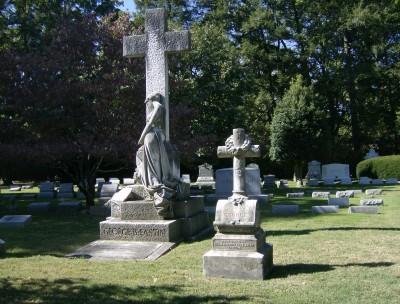 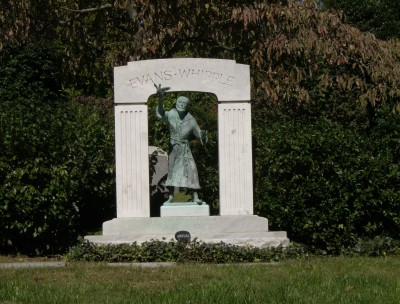 Below is the gravestone of Harry Collins, a well-known local magician in Louisville who performed for countless children in town and at conventions and fairs for corporate sponsors. A definite local icon, I just adore this beautiful statue of a beloved local figure. 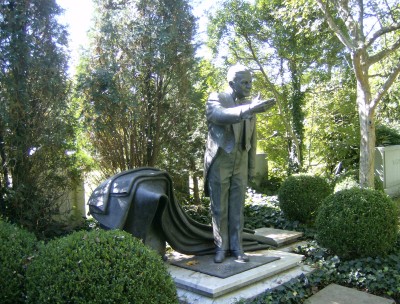 And of course, there is the grave of Kentucky’s third-most famous man after Abe Lincoln and Muhammed Ali: 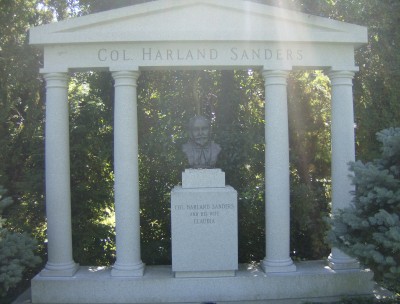 Lush and verdant, Louisville’s Cave Hill Cemetery is a totally involving urban experience, the likes of which I have not encountered elsewhere. Rustic, composed of literally priceless antiques and representative of so many different Eras and Periods Of Time and Fashion, it stands alone as a quiet and powerful representation of the respect and the awe in which we have viewed the beloved of us who have passed on.

But perhaps the most evocative of all the regions, for me, in this glorious piece of land are those simpler graves which still respect and honor those of less means, without the crafty artisan ship. These small but equally-evocative headstones mean the world to me: 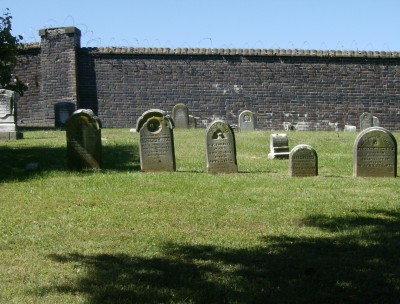 Hundreds of years of slightly acidic rainfall is doing its best to render the stones back to their former blank selves, as we lose the lettering of these old stones for people buried in the mid-18th Century and onwards. 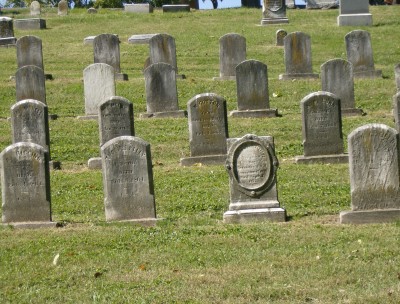 But some do stand out, somehow missing the worst effects of modern rainfall. 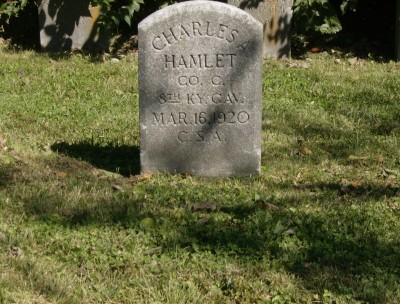 We spent three hours rummaging around and walking among headstones, my brother Tom and I. I am delighted I could, frankly. It’s something I have always wanted to give a full measure of time to. This is an experience with the permanence of death of course, as are all graveyards, but it also is a journey through fashion, art, landscape technique, urban design and preservation and the stark common sense which also tells us even the stones themselves are less permanent that we might have assumed. The Circle is made even larger than one knew. 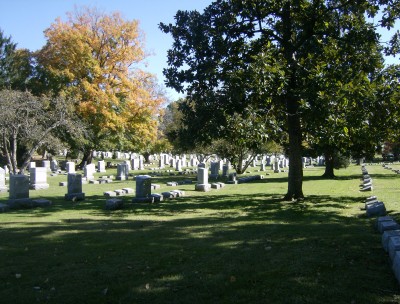 What a beautiful place. 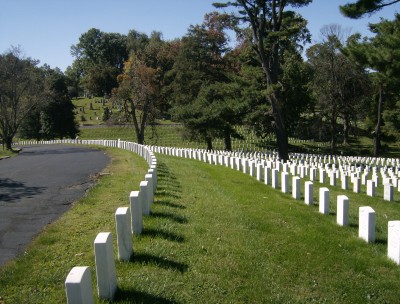