We have been dealing with a sort of primer on Landscaping, especially concentrating on the daily work itself and the atmosphere surrounding this labor-intensive field. I tried to describe the physical properties of an entire landscaping project, from the ravaging of the original cleanup and preparation to the very finishing touches we apply in order to get paid by a satisfied client.

Pretty much every post I enter in this blog deals with finished images of projects. Much of this is because I think people who visit here enjoy the eye candy of the many various plants, boulders and designs which reflect my style. These posts are therefore far more dedicated to what goes on the get us to that level. For me, taking pictures of progress in the field was often overwhelmed by a frank urge to get away from the labors of the day. While there was a time in my past where I worked obscene hours to develop my business and a style, more recent times saw relief at the end of a day – which, by all means – is to be expected. Part of the reward indicated in the earlier post demonstrated how rewarding the constructing process can be. Just the same, work always remained work to me, especially as I matured. That we have any pictures at all of projects during the course of construction is more due to the digital age than anything else. 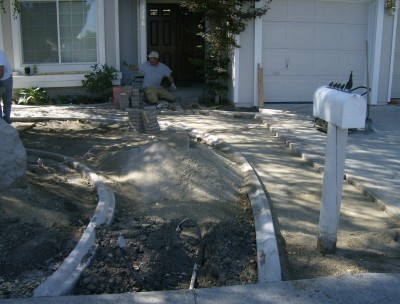 While I am reasonably satisfied with what I mentioned in the prior post about the work itself, I feel there are equally-important items to mention which tamp down the excessively optimistic picture I drew for the trade. Especially for those who – like myself – entered the trade with absolutely no experience.

Arrives on the job usually wearing the wrong shoes, without gloves or rain gear and with a smile. Landscaping does attract a certain personality to begin with even – usually someone who has a modicum of appreciation of the gardening thing. Now gardeners are not exactly notorious extroverts, nor are they somehow well-known egotists. In fact, the general conception of a landscaper is usually a mop-headed, good-natured, average guy who somehow gets pulled into it by the necessity of needing a job. Pretty exotic stuff! Cory here is a perfect example of everything but the “mop head”. 😉

Huge issue here. The biggest, perhaps. Landscaping has rejected some very capable and willing participants via injuries. Typically every event involving strength and endurance acquires a sliding scale of capability. Some guys are human backhoes – ex-football players, big guys with plain inbuilt strength, even the wiry dudes with nothing but tendons and sweat – people who are exceedingly strong, in other words, these guys (typically) fare far easier with the laborious efforts involved in landscaping. The rest of us – the other 99% – need to work our way into it. Plenty of people don’t understand this and it gets them hurt. I have had every body type in the human dictionary work for me and there are very, very few who are literally incapable of this work. But even the “big guys” can hurt themselves. Safety in landscaping is as vital as that of firefighting. There are the usual “first principles”:

Stretching before working. It doesn’t take long to get in some muscular stretching, getting some oxygen to the muscles and loosening them up. Your muscles are your payday here anyway. The boss can do abundant thinking for a while, until you are underway, at least. This precludes an awful lot of the tendinitis problems which are one of the primary injuries of new employees. Repetition is a killer if there is no warm up and no variation. I include “rest” here, as well. There is nothing wrong with taking a break at an appropriate time. I mention all this because of the homeowners themselves who might consider this work on their own. Work your way into it. 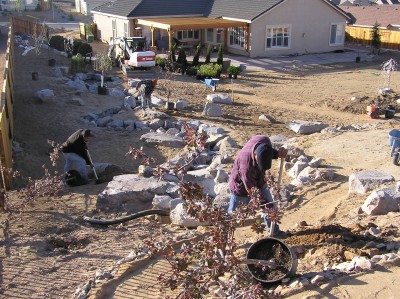 Other issues involve proper shoveling, proper raking, wheelbarrowing, lifting, carrying and bending over. I have seen more back injuries from people reaching across an irrigation trench for some part than I have wheelbarrow accidents – and all while sitting down! Everything mentioned above regarding safety issues involves the back and legs – and sometimes arms. Use the legs to help the back, especially when shoveling. Raking – stand up straight! Wheelbarrowing? Know your weight limit. If in doubt, take less of a load. You can build your way into more efficiency – and make sure you have a solid route to take. Add boards if necessary and never try to rescue a dipping wheelbarrow – ever (see “accidents” below). Another issue is the grip. A first day of wheelbarrowing generally ends with the sorest hands imaginable. The grip will get better, but it takes a while to get there – up to a week. Always remember – a straight back is a healthy back and far, far more powerful. By reaching out and stressing one portion of the back, we lose the wild number of helpful muscles which can be involved in the exercise. And when a back goes bad, it’s over. You only have one. 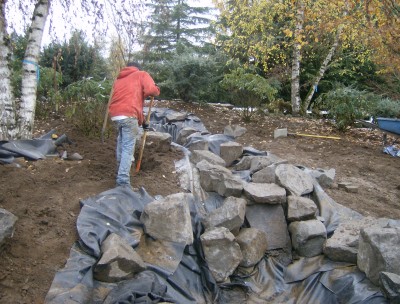 I’ll never forget hearing the whine of an Ambulance siren at a project of mine in Vancouver, getting closer and closer. I was speaking with the project manager at the time for this two block large project with the siren sound as background when one of my guys ran breathlessly up to the shed, his eyes wide, yelling that one of our guys “may have broken his back!” I’ll never forget the raw emotion of that moment as it was one of our younger and newer kids who I favored, partially because of his Dad who I acceded to hiring him. As I approached him, lying on the ground, his wheelbarrow full of 2-4″ river rock on its side and spilled, his body twisted uncomfortably, the ambulance arrived at the same time. I saw his back was twisted but not broken – that one was easy because he was moving sharply as the pain would pierce his consciousness. But he was definitely incapable of standing or doing much of anything. His eyes brimmed with tears from the sheer pain and he looked at me with disappointment. He was unable to talk but I could see he wanted to apologize for the affair. I stayed with him and went to Emergency with him, calling his Pop, reassuring him he was still my guy. I made him laugh before they got him in the bus and then he winced in pain again but the smile was genuine. It took the doctor no time at all to diagnose that he had wrenched it and perhaps even torn a muscle in his lower back. Turns out, he hadn’t even torn the muscle but the pain was so intense he could not rise at the job site, freaking everyone out into making what was really the right call.

He recovered quickly but he didn’t come back with us. I felt real bad about it, myself but what he had done was among the cardinal sins of “totin’ and liftin’ “.  It became a truism when I ever dealt with new guys operating wheelbarrows for the first times: “Never try to rescue a falling wheelbarrow!” He had hit a wet spot and the loaded wheelbarrow had tilted to the right. Loaded with rocks like that, it probably weighed 300 lbs. Having spent all that time loading it up (and probably overloading it to impress everyone) he didn’t want the chore of having to reload it again – totally understandable. But the momentum of the tipping wheelbarrow raised the odds – with momentum its weight increased and the torque required to resurrect it was too much for his back. The wheelbarrow won, in other words.

He was fine and ended up back playing hockey like he had before. But I have experienced other people going away owing to injury, usually out of inexperience and trying to do too much. Any trade has its inbuilt little horrors. Landscaping’s Shop of Horrors is physical. The thing is, if someone can get by the initial brutality of the combination of repetition and heavy lifting, they pass a hurdle which probably won’t be seen again. After that, it can be fun. 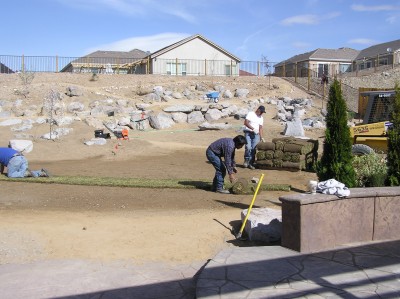 What always fascinated me the most was watching the evolution of the labor, intellectually and spiritually. Intellectually, most guys take to the simple tasks with a sense of relief. And it is some simple-minded, mindless stuff on many, many days. Generally, I require a body to perform redundant and repetitive tasks. Those pallets of pavers, for example, in the picture where Cory is using the brick saw – they need to cross that driveway and get put on prepared ground. Just one of those pallets – loaded – weighs exactly 2,200 pounds. For this project – a small one by our criterion – there were 10 pallets. That’s 22,000 lbs, or 11 tons. That’s a lot of carrying.

In the picture above, the run from where the pallets of sod were was a good distance. What the guys here did was move the pallets closer to the laying area with the aid of a machine and its forks. The use of machinery is always an improved method of back-saving exercise. The same applies to that oft-mentioned and diabolical instrument – the wheelbarrow. The fact is, imagine trying to accomplish what it does without it.

But, almost always, it becomes a challenge to do the job better and more efficiently. It is a given that guys will work to make it run smoother. Input from labor is a boss’s best friend. The one reliable aspect of having humans work for you is the interest they put into what they are doing. Almost always, I hear questions or comments regarding the processes we use and I have changed my basic ways of doing things appropriately. This is one of the cool things about the job. Labor such as this is rewarding as hell, in the end. Cooperation might just be the single biggest inadvertent payoff in all the trades.

One of my all time favorite philosophers is a guy named Eric Hoffer. He was President Eisenhower’s favorite author and a stevedore at the docks around San Fransisco who delighted in the challenges of getting things done. That he chose manual labor as his path I believe is reflected in his philosophy. For him, every day was new and fraught with new challenges, just like construction. I believe learning is constant and it is true of any labor we do in landscaping – and probably any labor which ever gets done anywhere.  He said this:

“In a time of drastic change it is the learners who inherit the future. The learned usually find themselves equipped to live in a world that no longer exists.….” 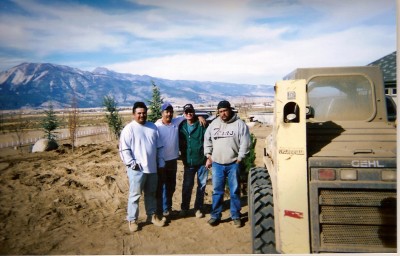 8 thoughts on “Landscaping – 360 Degrees Of Installation – Safety Only”