I’ve decided to rework a bit of this post and then republish it, to honor one of the finest men I have ever known. This was originally posted in October of 2009, following my visit to see him and a few days yucking it up.

Word recently reached me that my good friend Bobby passed away. This is a hurtful loss for me. Bobby Miller embodied all that is good and all that is fallible in life as a human being. He was handsome, playful, energetic and as loyal as the day is long. He never spent any time being dishonest nor did he ever design to hurt another human who did not deserve a Karmic Reward.

Like me, Bobby never really grew up inside. His nature was pure, in so many ways, it is why losing this gem of a person hurts. He was fresh air at any time.

Bobby’s humility was his greatest accomplishment. He was exceptionally hard-working and took nothing easy. He inspired me – and I wager many others – with a wisdom beyond his years when he gazed deeply into your eyes with his normal perceptiveness. He would go far, far out of his way NOT to upset someone, no matter how appropriate it may have been. His compassion was tremendous – just a stunning asset which ought to teach us all the more about life. Like the Tibetan antiquities he sported on his walls, Bobby was the real deal in this.

He would respond thoughtfully to every single thing you ever said – well, unless we were having hella fun anyway. Then he was the guy you most wanted to be with because he never called a halt to fun, either. He had an uproarious laugh which was another gift he gave. His laughter was somehow always intelligent – maybe at goofy stuff – but, still……….  😉   He loved irony like few others ever will. Those were always the best laughs.

Bobby Miller, man. I’m sure gonna miss you. I love you madly. 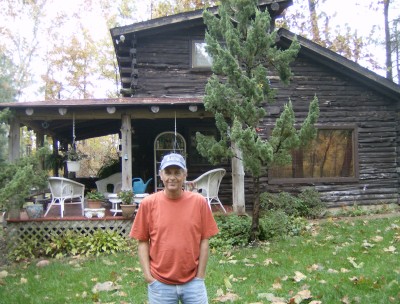 I can’t help but call him Bobby, since that’s who he was when I met him, way back in high school. The truth is, I met his sister Regina first, but that’s another story. She was drop dead gorgeous and a real hoot to be with. But so was her brother, I found out to my distinct pleasure. Bobby and I had some serious adventures and there never has been a more honestly curious person than this exceedingly honest and modest man. Right now, Bobby’s battling some serious illness – with a hopeful treatment he’s going for in Nashville – so we keep our fingers crossed. I recently spent a couple days and a night with him and we reminisced about old times as well as questioning our place in Life and for the future. I really don’t believe I spent a bad day with this guy – ever. No. I KNOW I never did. 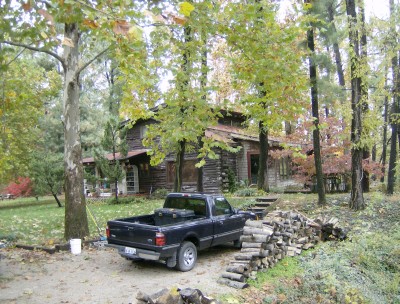 The log cabin he is posing in front of up there he built himself. It is one of those divine Thoreau-esque sorts of places that fits so well in its environment, it nearly appears to have grown there. What is most remarkable about his spread is that it is built on reclaimed strip mined property. Well, actually “reclaimed” is wrong – because it was abandoned back when strip mines would simply get mined out, very much ‘un-reclaimed’, leaving humongous trenches behind as if some Mighty God had scratched his fingers in dirt leaving parallel lines of destruction behind. But the forest and Nature herself reclaimed what we see here, and it is actually quite something. Here’s a shot off Bobby’s porch: 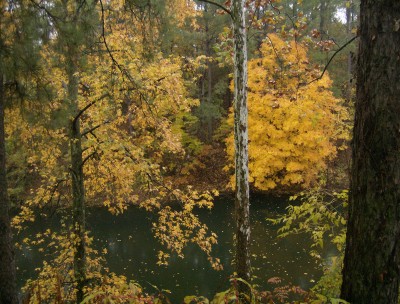 Here’s the man himself, tinkering with some gadget while I take bad pictures. But it also gives a glimpse into the interior of this – perhaps the single most livable, most comfortable home I ever walked into: 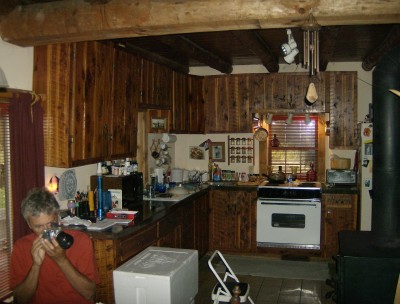 The wood stove to the right in the above picture is the heating unit for the place. Owing to the thickness of the logs constituting the house walls and their tight milling, the insulation properties are off the charts good. He burned one log while I was there – a 24 hour heating job. There is plenty of the “raw” look which authenticates the “do-it-yourself” aspect of the construction but it is decidedly not an amateur job – not by any stretch. 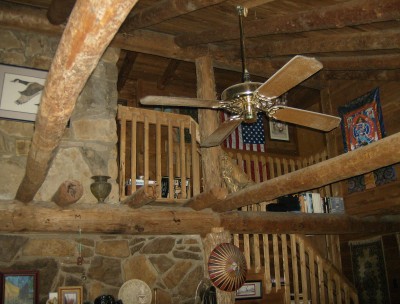 The massive stonework fireplace was a chore and a half, according to Bob, and was done by a friend while Bobby lugged in a few tons worth of rock. This picture is a little dark, but the scale shows here, I think: 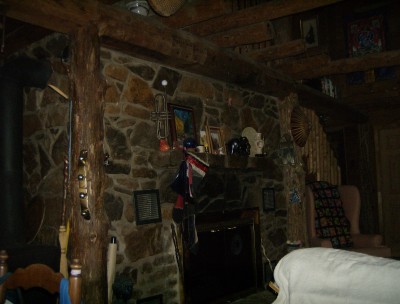 Warm and inviting, Bobby crafted himself a pure luxurious and homey hideaway. His nearest neighbor is a mile away or so and he is surrounded by everything a Kentucky forest offers. That means moles, ticks, fleas and a bazillion nuisances, lol. He has some great tales of critters and dealing with their intrusiveness. He is constantly afflicted by stray cats who glom onto his place and create kittens. He has liked some of them immensely but soon realized the local hawk and owl population liked them more.

A lot more. Bons bons for the wilderness!

Bob has the greatest porch I ever saw: 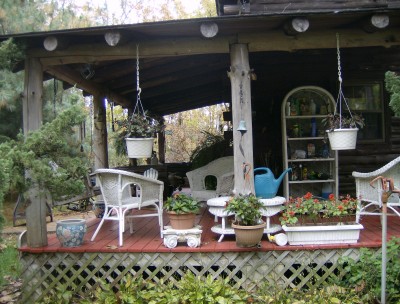 He landscapes his place marvelously, using tasteful groupings and stressing his lawn which adds so much domestication to this wild joint of his. Like many American men, Bobby is sort of fanatical about his grass. I always get a kick out of that, myself, having installed so dang many of them personally. To me owning a lawn is like acquiring a pet – way too much trouble! But these guys love them and, I admit, I can see why. Besides, it’s Kentucky, not Reno, Nevada and it is the very home of Bluegrass. 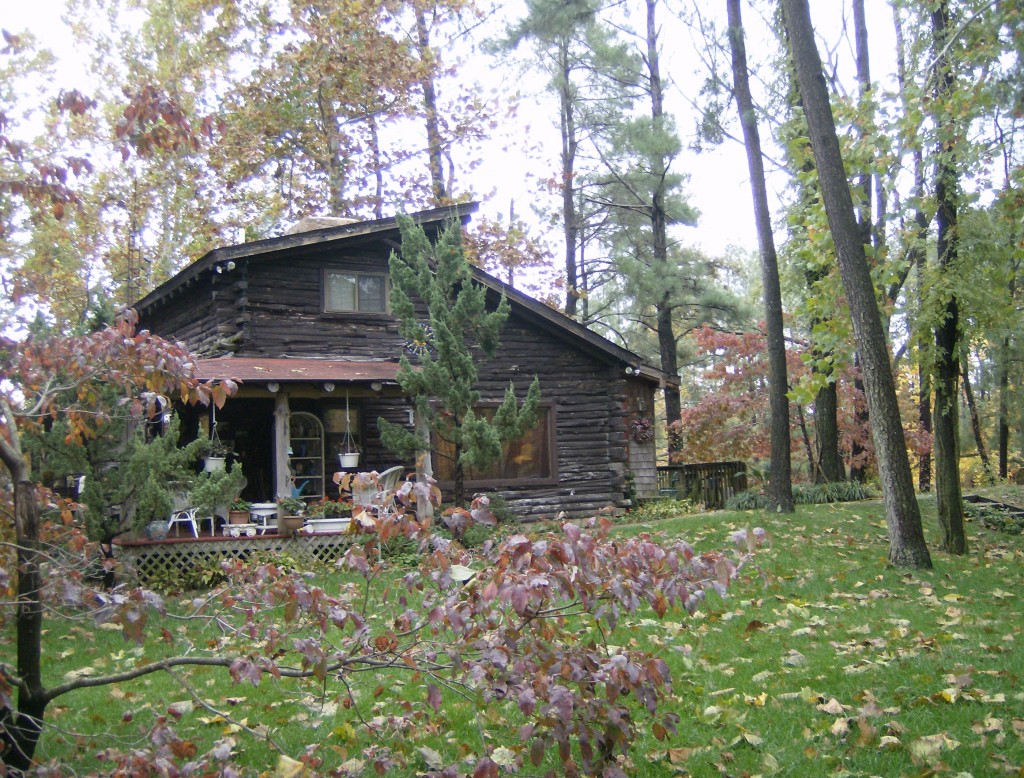 Here are some looks from the road that leads to his place, featuring views of these old strip mines whose lakes now contain fish – no matter how difficult it is to actually get to the water from some slope of about 70 impossible-to-climb degrees: 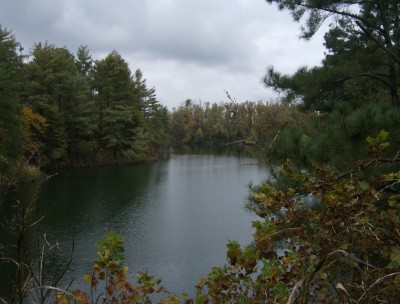 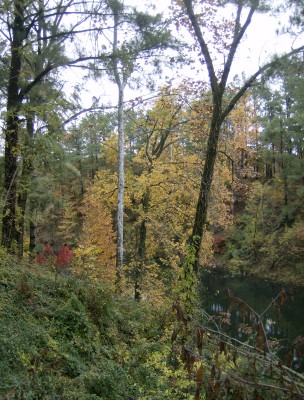 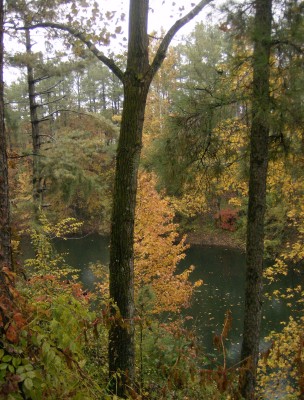 It’s now just a little bit of Paradise for a very deserving person and one whom I plan on seeing a lot more of. I like this great sweatshirt he’s wearing, sporting the cool look of my favorite town: 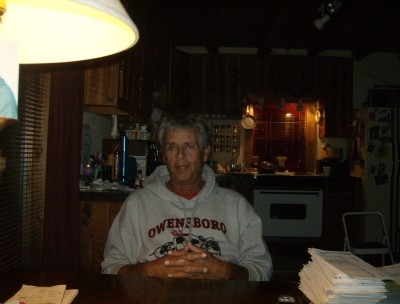 My personal feeling is that if I deserve a friend like Bobby Miller, I am a very blessed man. A little dumb, come to think of it, but then – that’s not a crime yet. Hell, look at our politicians! 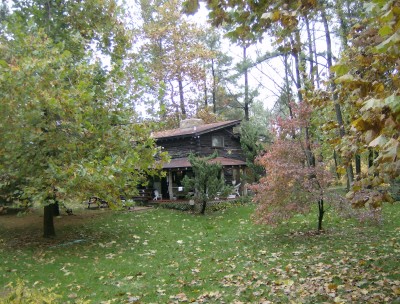 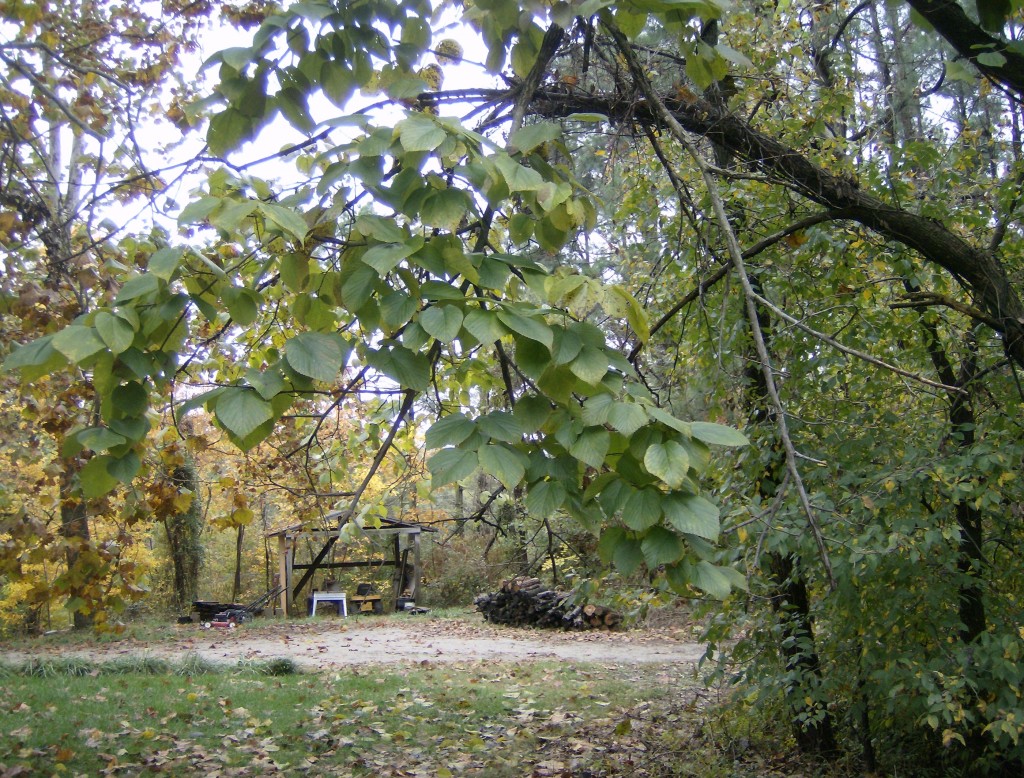