The weather in Louisville is telling me my choice of relocation was superb! Yesterday was the – what? – 14th of November and most of the days I have been here, since September 30, were in the 60’s and 70’s. Hey, I’ll take it! I got a call from my old buddy Paul who mentions it was 43 and 31, with rain, yesterday in Portland, Oregon . Nyahhhhhhh!!

But I know what I signed up for – I am not that naive. The time will come when the oncoming Spring will look like this: 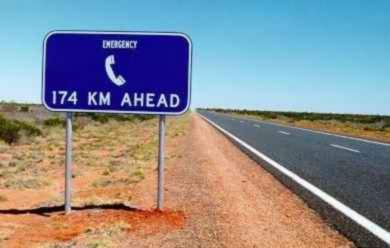 Or at least, that’s what I fear most. Nevertheless, the weather has been remarkably benign and I am utterly grateful for it. It has allowed my Ma and I to get walking locally and for my camera to click away at the abundant Fall color streaking through Louisville like a fairy painter. 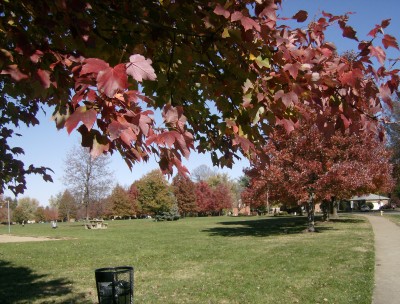 The uncommonly red Red’s are mind boggling in their richness and in the Madras-like near-bleeding symphony of colors packed right within one tree itself. Other trees show an equal propensity towards riot – just stunning variations within the same little unit, all displayed like finery at a Fall Cotillion. 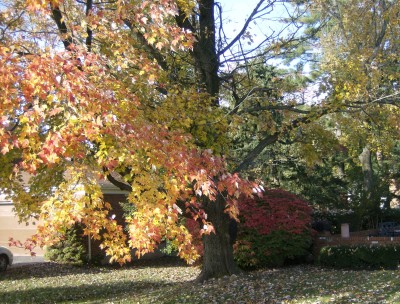 My niece, Hannah and her happy man, Jimmy sport gorgeous smiles in front of their new digs with the perfectly-colored tree right in their own front yard!

Another view of this Natural Wonder as The Mumster and I drop in completely uninvited. We are both positive dropping in unannounced is a privilege of age, lol: 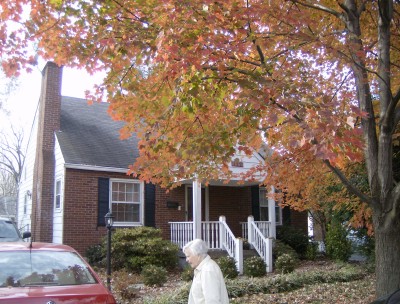 The stages have nearly completed themselves and now the leaves are falling. I am readying my Muckloks. Few people understand the depth of my disgust that Winter is even a season. There should really be a law.

But what a sensational set of stages it has been – the Yellows took my breath this year: 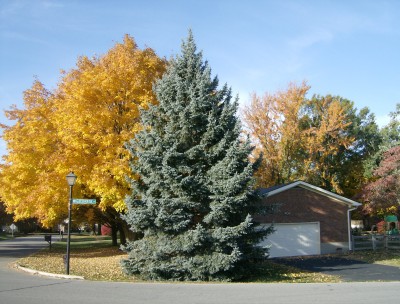 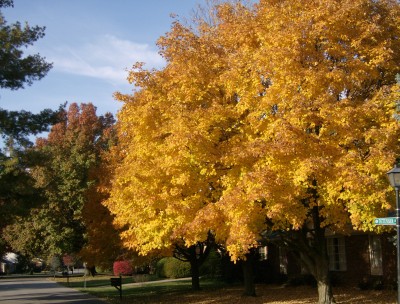 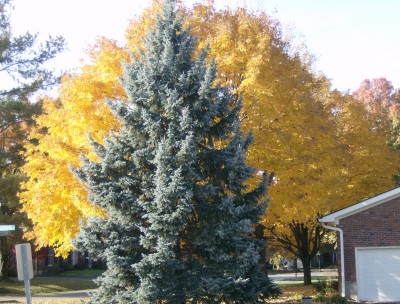 These are like a second Sun, nearly blinding on sunny days. Of course, this was a stage leading to a real mess underneath – the bane of homeowners all over but the source of some serious fun for kids, 2 of which I caught doing what we always did as children – making ourselves disappear! 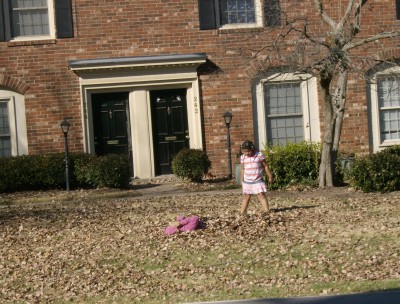 Burying your friend can be hard work. You pretty much have to stay at it because they move around under the leaves and then you can still see parts of them – which defeats the purpose, for Pete Sakes. Let’s move on and get ‘r dun. 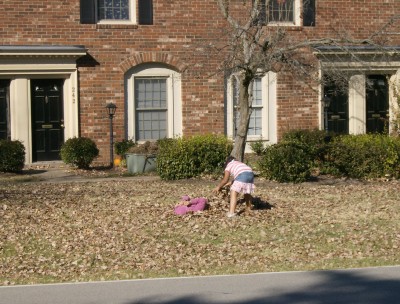 Applying yet another layer of leaves brings us closer to our goal. It’s not easy but the one good thing is we have plenty of material. Like everything else, burying your buddy takes a bit of time, but these stages are closing in on completion. Here comes the Coup de Grace!: 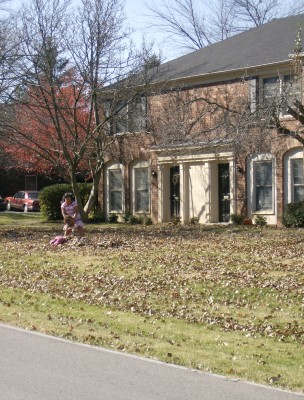 Oh……….has anyone seen my horse? 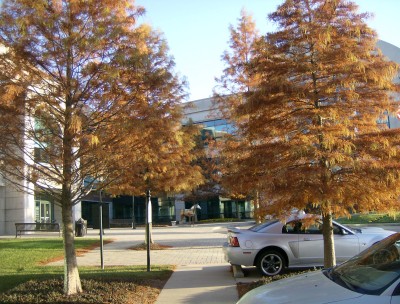 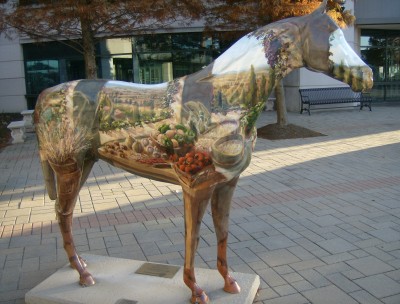 The City of Louisville celebrates his love affair and their location as the center of Thoroughbred horse racing history by having local artists paint these styling nags all over town. The result is a shockingly beautiful rendition of horse art at the most surprising locations – literally hundreds of these – all different – all over the city. 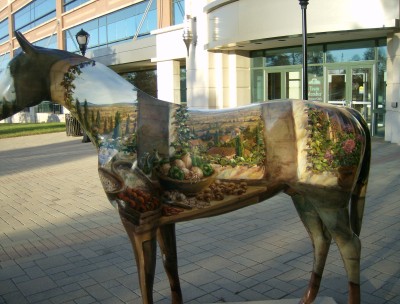 These were at the entrance to the Papa John’s headquarters  – near where I am living. They also constructed a killer park, sparing no expense in beautifying the local area and pleasing those who walk there: 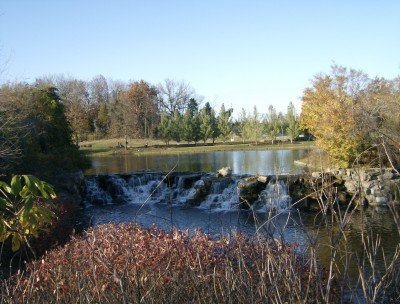 The very fashionable – these days – Dawn Redwood…. Metasequoia – turns its conifer needles into a deciduous showcase along the walks leading up to my horse and the offices. I must make sure I drop in here this Spring to watch them redevelop. It gives me something to look forward to. 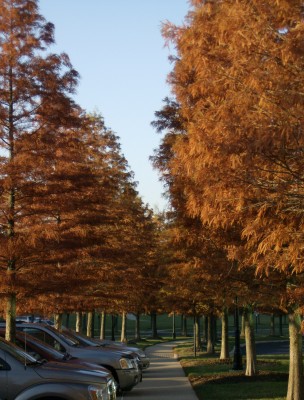 In fact, the Metasequoia has an absolutely fascinating history all of its own. Quite prehistoric, believe it or not it was nearly an unknown species all the way up until 1944! Lordy, I have seen hundreds of them and even planted a few myself. I was shocked to find out these facts. Here is a bit from Wikipedia:

“Metasequoia was first described as a fossil from the Mesozoic Era by Shigeru Miki in 1941, but in 1944 a small stand of an unidentified tree was discovered in China in Modaoxi by Zhan Wang; due to World War II, these were not studied further until 1946 and only finally described as a new living species of Metasequoia in 1948 by Wan Chun Cheng and Hu Hsen Hsu. In 1948 the Arnold Arboretum of Harvard University sent an expedition to collect seeds and, soon after, seedling trees were distributed to various universities and arboreta worldwide for growth trials.”

And here is one from a local park, in its currently-all-the-Metasequoia-rage, “Brown Phase”: 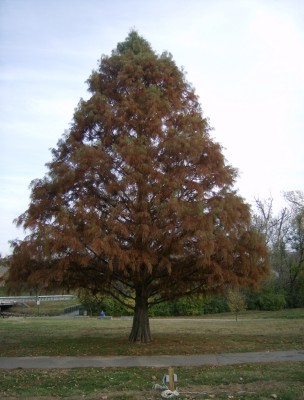 But now back to the park at Yum! Foods:

Gorgeous waterfalls abound in the large lake nearby, enjoyed by the entire city as a free range sort of park. As a waterfall-maker myself, I see this and my heart lifts. They have done a masterful job of naturalizing the unnatural – complete with some diesel engine down below pumping what has to be a few thousand gallons per minute over these neat rock formations: 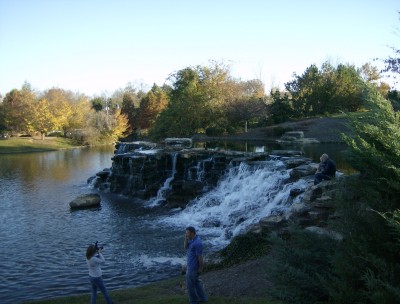 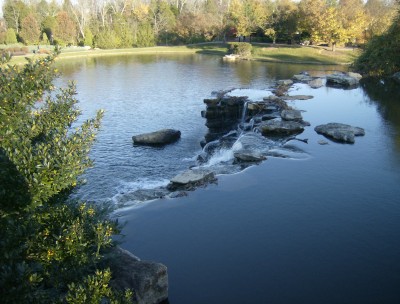 A huge tip of the hat to those responsible for this Falls. This is near-perfection. 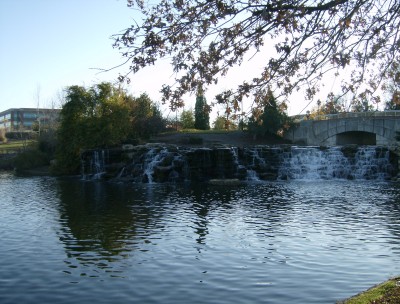 I think I’ll close now and continue this. I got steered away – as usual – from the original theme. Hey – there’s just so much exciting stuff out there. Sue me! 😉