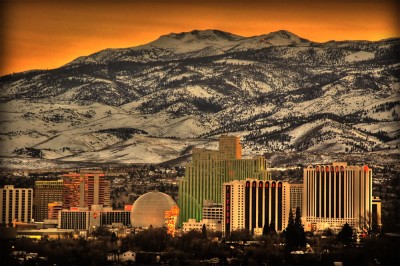 I have gotten some mail from old friends – people I have not seen in ages – who asked “how on earth can one landscape in Reno?” Well – it’s not that hard, given modern technology, irrigation and using all the advances in botanical science, native plant insights, drip irrigation and a love for some space between things. In the end, Reno may well have been my favorite place ever for landscaping, the truth is. It has become easier by degrees, bearing the above in mind. With a healthy imagination, one can literally “go to town”. Anyway, I am recirculating this one for their benefit. Incidentally, I added much to the bottom.

I was surprised to enjoy this town as much as I did, living there. In 1991, my wife and I decided it was too “shaky” in Santa Cruz, California, where I had spent about 8 months cleaning up after the 1989 Loma Prieta Earthquake. The sale of her business and my mobility allowed us to think about living somewhere where house prices were reasonable to raise our brand new daughter. Since Alice’s Mom and Dad were retiring to lake Tahoe and her sister then lived in Truckee, California, Reno became a destination of interest. A real probe of the environment saw me sleeping after 10 minutes of riding. The brown of the surrounding foothills and the crushing lack of natural green did not move me at all. And, of course, like anywhere, there were other secrets – lurking.

However, I woke up at a timely moment. As we drove on the freeway close to what was then the Reno Hilton Hotel, I saw that James Brown was playing there on New Year’s Eve! That most definitely got my attention. So, like the rhododendron blooms which introduced me to the finer side of landscaping, “The Godfather Of Soul” played a role in my deciding Reno was not so bad. I said “Yes”. 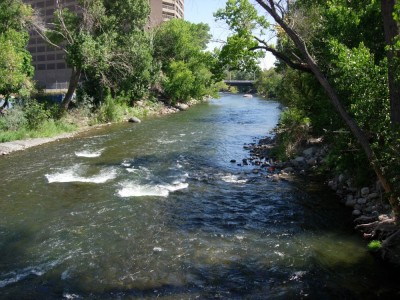 We moved, bought ourselves a home and lived there for the next nearly 20 years. I was fortunate enough to land a job almost immediately, working for Tom Stille, who I describe better below. However, I temporarily left for Portland in 1996 for a stretch, following our divorce, commuting often by driving 540 miles for a weekend visit, then returning after a day or two. The drives were almost universally breath-taking, cruising the American West in a good car, even if I arrived exhausted. In Reno, I had got somewhat fed up with local attitudes in landscaping but I finally moved back when I realized the strides that had been made in landscaping – and the absolutely booming housing market – in my absence. I began another venture in landscaping, at first working for a guy – Gail Willey – who was connected like crazy to Lake Tahoe, then running crews for another interesting dude, Tim Burkett,  before launching out on my own. More importantly, I rediscovered serious softball. How nice to absolutely be certain you will never be rained out!  I played often – some years over 200 ballgames, including tournaments and regular season affairs and met more friends than is legal. Reno is a softball-nuts town – there were over 800 different teams in a town smaller than Fresno or Lexington, Kentucky.

But back to the “lurking secrets” – here’s one now! (My sister Diane’s back porch): 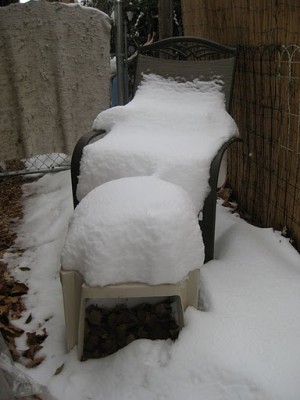 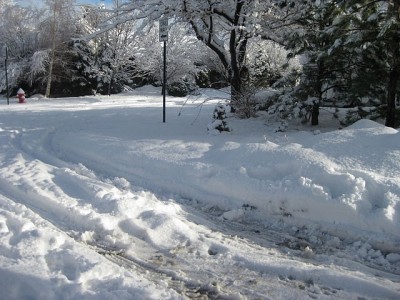 At least 4 times I remember waking up one morning to upwards of 3 feet of snow. Another memorable time, I woke up to 4 feet, then 3 more the next day! That was an amazing storm which fed 19 feet of measurable snow up into the upper regions of the Sierra Nevada Range to our West – in 2 days! And James Brown did not come over to clear my driveway!

But that snow also leads to the other, more pleasant realm of Winter Sports, for which Reno is justifiably famous. Having hosted a Winter Olympics at Squaw Valley, hard by Lake Tahoe, the slopes for skiing are the match of anywhere in the world. Plus they continually expand facilities. Pretty much every kid in Reno has a season pass to snowboard or ski at some mountain – of which there are many nearby. Here’s a look at what it looks like, driving around up there: 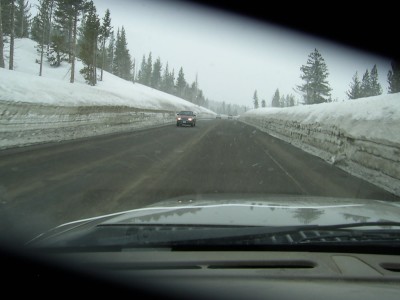 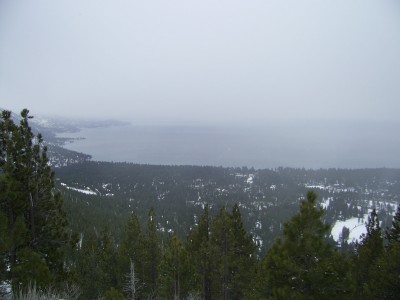 And on the other side, looking down into that valley where Reno is, in the far, far distance: 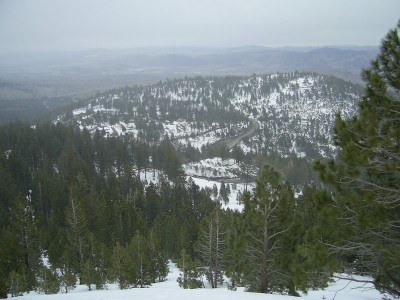 Interestingly, all that snow has implications for Summers and for my trade. Reno has a pretty well thought-out reservoir system which collects and stores all that snow melt. In fact, it is the primary source for water. With accumulations sometimes over 200 feet in the higher levels over a Winter’s time, it’s easy to see how all that works. Naturally, yes, there are poor years for snow melt, even consecutive ones which do indeed affect water usage.

And sometimes, it also makes for the most intense disasters, such as in 1997, when a massive accumulation of snow was followed by temperatures literally in the 80’s and with the accursed poor luck that the front also containing rainfall of equally massive proportions. It led to The Reno Floods of 1997 .

So – it is definitely glitzy downtown – (the natives don’t really get down there much except to entertain out-of-town guests or to see the many shows which circulate through) and actually somewhat homey if not “small town”. Reno, it turns out, is a warm-hearted, family-oriented and surprisingly professional town with progressive ideas in terms of the  environment in general. For one thing, it is nearly all electrified now by Thermal Energy, tapping into its situation as the most active thermal spot in the country. I’ve done landscaping out by these thermal “leaks”, where you can smell the sulphur of volcanic emissions coming right out of cracks in the ground. There is a thermal “spa” out on the route to Carson City, going South, complete with abundant little puffs of smoke to be seen on a regular basis. Currently, I read where Reno is now 100% dependent on this form of energy and its developer is a leader in the world for the technology. 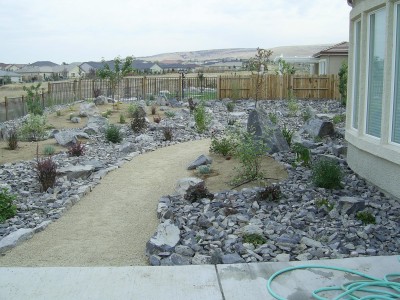 I was fortunate enough to begin working in Reno under Tom Stille, President and resident Landscape Architect for Interpretive Gardens of Reno and the Pinyon Design Group of the same address. A pleasant and smart-as-a-whip dude with a low tolerance for fools, Tom was at one time a leader in the then-new technology of “Drip Irrigation” as well as a front-runner in the concept of “Xeriscaping” – the most productive possible use of low water volume landscaping with the implementation of native plantings. Having come from environments such as Vancouver, British Columbia, my knowledge of irrigation was less than zero. Tom taught me a ton. Tom’s attraction to the Xeriscape concept was early and total. He saw its obvious necessity and he took to it and helped develop many local projects – including the Reno Airport Landscaping and the incredible Reno Automobile Museum – which exist to this day, 20 years later. Tom ruffled some feathers in the “British Model” community, attempting to talk sense and sustainability to the sod growers and nuttier designers, often to no avail. He could get hot. 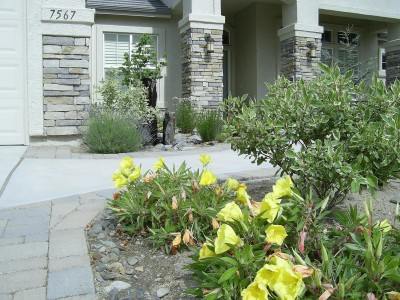 In the end, it led to my embracing a far more “minimalist” perspective in designing my own projects – something which, by stressing the economy of water usage placed more emphasis on other factors, such as mulches, garden art and hardscapes. As well, it acquainted me far, far more – and totally satisfyingly – with native plants – no matter where I landscaped. 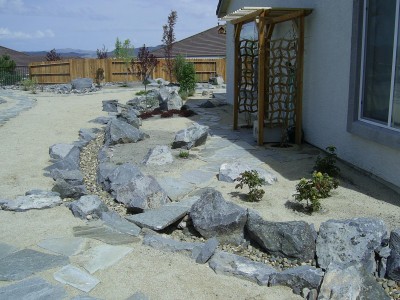 In the end, Reno was a marvelous experience for me as I sit writing here in Louisville, Kentucky, where irrigation is a near-foreign term. I love me some Reno, Nevada.

(Added later)…………Interestingly, people with wells on their own properties can feel a bit more free about finding enough water to irrigate large lawns and water-hungry plants. Here, for example, is a case of that, out in the Washoe Valley – a home we designed and did for a builder there: 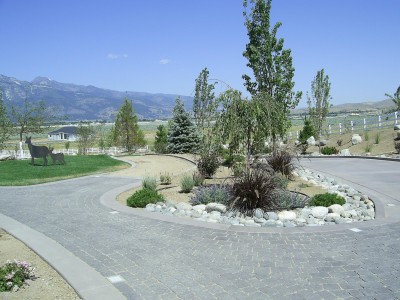 The pavers here circle the home as well as fill in not only a large driveway but also a substantial patio. His views were magnificent, obviously, with “Slide Mountain” – the reverse side of Mount Rose –  towering in the distance. But most interestingly, he had a great well, nearby as he was to Washoe Lake, which allowed him to do more things than your normal water-challenged souls in Reno proper. 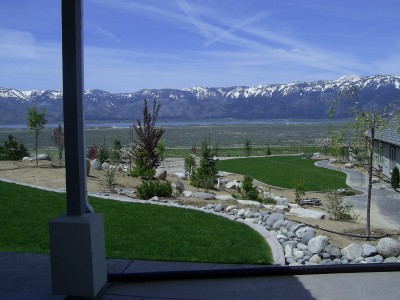 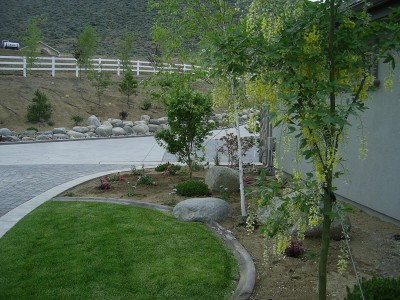 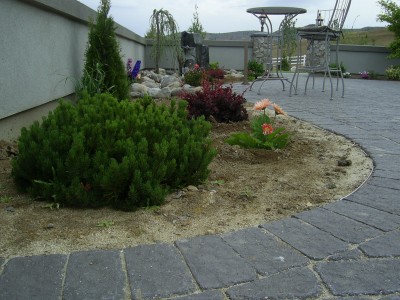