Landscaping at the lunatic fringe of wealth, like carpeting at the lunatic fringe of wealth, or any other contracting trade, is its own class. Whereas it is a most heavenly possibility to help relieve these people from their overburdened wallets and bank accounts, the results can be disappointing, sad to say. Let’s just leave it at the point that not every encounter with the Uber-Wealthy is a positive experience. In fact, it’s about 50-50, the truth is.

I will absolutely not name names in my blog, other than referring to conversations of a casual or humorous nature. But I can tell of stories where people were strikingly miserable who were wealthy into the hundreds of millions and even billions. They’re people too! They need landscaping and all that stuff. Let’s just say – on a personal level – in many cases people get predictably suspicious of others when they have a lot. There is something to the adage that plenty yields some paranoia. Sometimes, a whole dam lot of it. In some cases, it becomes a threat to your own security. The rich play by their own sets of rules. In fact, many is the time that they make them up!

Anyway, rather than continue this line, knowing nothing we can say will change things that much, just know that merely working for impressive people with “beyond-impressive” homes is not some automatic entree to becoming rich one’s self. You can also go broke working for them – and almost just as easy. Sometimes – through no real fault of your own.

Here’s the third most expensive home in the US: (weighing in at a mere $100 million)

all pictures enlarge by clicking them 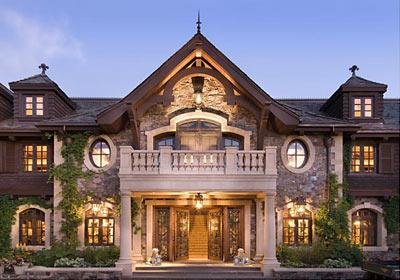 Here’s the pool! That’s marble, by the way. 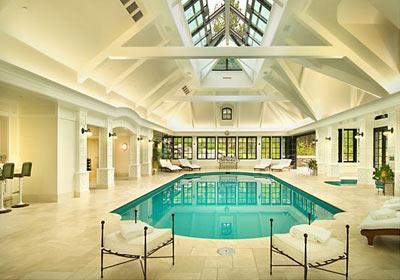 Now, I admit, that was something of a freak show. In one case, it may well have been the most nervous time I ever spent landscaping. We literally had to transport ourselves in a huge excavator, complete with about an 8 ton boulder in our grasp, for placing in a water feature I regret to say I have no pictures of. The slightest rock or article in the way as we crept inside could have tipped the machine enough to scar the walls – or worse, of course – of the granite facing, there was that little tolerance. In fact, we graded and raked towards a perfect finish underneath, just so we could get that monster machine between the walls without incident. It was a white knuckle experience, right off the get go. In fact, as interesting as this project might seem to an outsider, it was a small version of Hell in many ways, there were so many eyes, including the owners – on us at all times. Nor did we last – lol, there were a total of 5 different companies who worked on the project, jettisoned one after another like players on a chessboard. Some projects are not worth the trouble, frankly. And that’s a tough lesson.

Now here’s a mere 17 million dollar home. Now we’re slumming!! Actually, this homeowner was in the dumps at various times for reasons which were his own, lol. I confess, I never really cared for the dude. He once referred to it as a “dump”. Go figure. Fortunately, we were contracted by the builder, rather than the owner, so we almost got paid completely! Oh – I almost forgot – it’s rare to get all your money with many of the more miserable of these types. What really makes that odd is the generation of higher prices to begin with for the proactive contractor, familiar with their ways. I once literally gave a rebate to a client in this category of wealth because he paid his bill in full. I’m not kidding, either. It may well have been the best few bucks I ever spent too. He sent more people my way than I had time to do.

So here’s what $450,000 worth of landscaping will get you: (bear in mind the more open areas were filled with perennial and annual plants and some very gorgeous lamps and lighting which were articles of beauty on their own at about $250 a piece, copper tulips, in fact, with blooms for lights, all multicolored. It is typical of this site that my pictures are made either during construction or soon – like real soon – after completion. We then move on.) 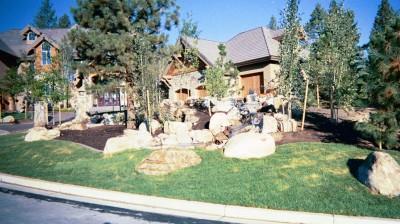 That waterfall there is a two part deal, branching out at the top and going in both directions. Here is the other side of it: 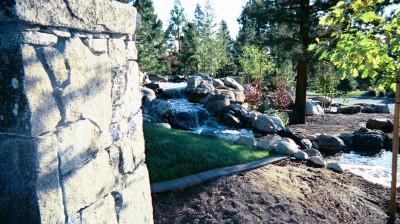 From the street, here is a longer range view: 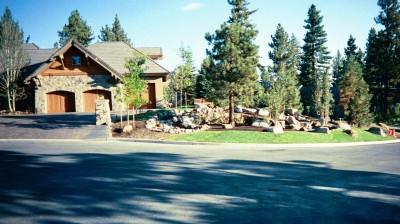 Nor were these the only water features! We installed this one up by the front door. 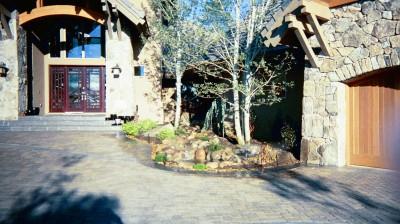 It’s rather hard to make out owing to the fact that our drip irrigation  sprayers were on at the time. Those Aspens, by the way, were our additions. 30′ feet high, it was a mighty tight fit putting them in so close to the house. They each weighed a couple of tons and were placed by a monstrous hydraulic tree spade, along with some Noble and White Firs we placed at other locations nearby.

Anyway, here is what the little water feature looked like in process. From this: 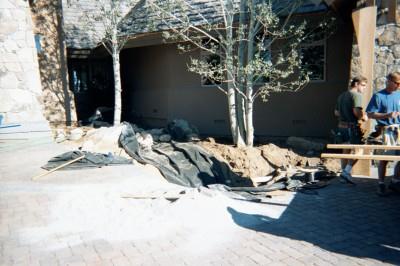 To this, then the finished product above. What was funny was that we decided to toss this in as a “toss-in”: 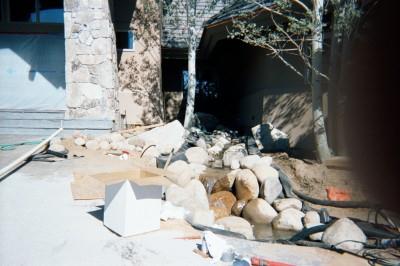 It had one humongous rear patio of stamped concrete: 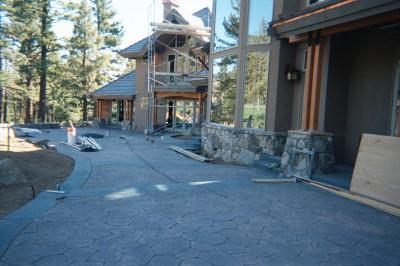 The stone work was a triumph, however. These walls really add to the overall ambiance terrifically: 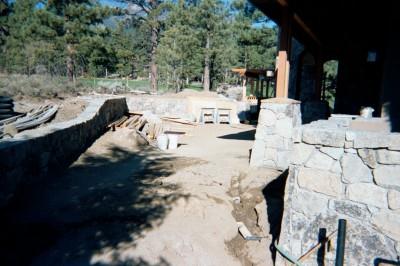 The driveway was an interesting mix of brick pavers and stamped concrete. 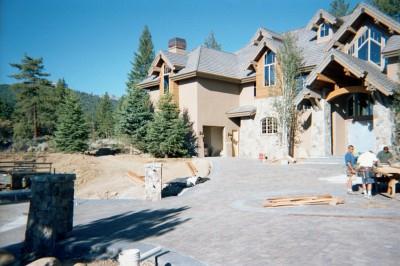 I really enjoyed the brick work on this project. It worked out outstandingly. Note the Firs in the picture above. Those we also planted, same with the Aspens. Here is a look at the large trees we inserted before we worked on the pavers. One is before we finished the project and the other is after. Of perhaps even more interest is a look at the wild numbers of electrical wiring, pipes and the general traffic in underground services, shown only slightly in the picture just below. Wiring for lights was inserted at the same time as the irrigation piping, irrigation wiring, electrical for the pumps running the water feature (220V) and even power for the heat tape and security gate which goes under the brick driveway: 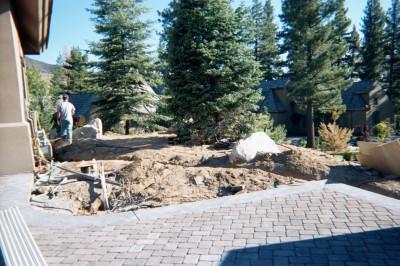 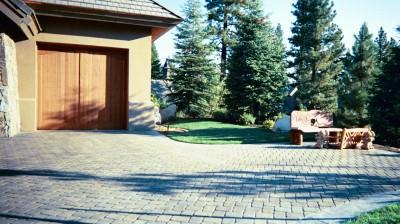 Stressful at times, yet often resulting in sublime satisfaction for purely selfish reasons as an artisan and tradesman, projects such as these are what we literally die for. 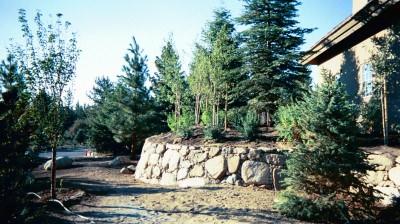 I have a few of these cataloged and I await some pictures from my brother which include other outrageous projects, all of which mixed pleasure and pain in ample amounts – and in every conceivable way. 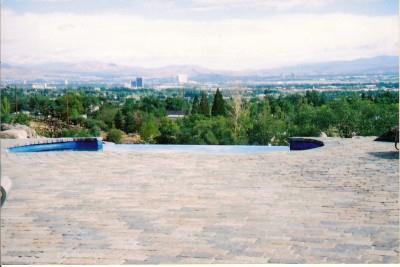 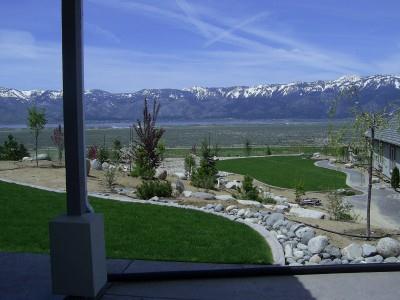 8 thoughts on “High End Landscaping – Workin’ For The Rich Folks”