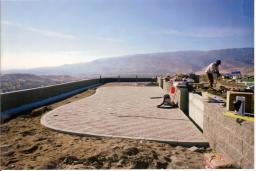 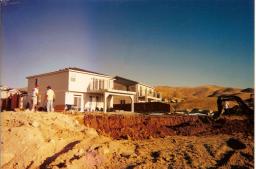 I guess it’s obvious which is the “Before Picture”.  Nor is the “After Picture” completely finished at the time of these pictures.  Yet, I feel this look includes the scale of the project and also deals with exactly what sort of preparation goes into projects such as these.  This was a backyard of a home with a fabulous 270 degree view of Reno, Nevada. Reno’s skyline downtown and most of the surrounding mountains, including the Sierra Nevadas are included in this breath-taking property’s views.

What were doing in the ‘before’ picture above were the basic excavations.  As I hope is obvious, the excavations were on two levels.  It is easy to see the cut just off the lawn; Kenny and Romero are standing and wasting time appropriately, just above the cut.  What may be less obvious is the cut in the foreground, which was far more deep and every bit as challenging. Once done, we were able to add about a foot of base material as a structural support for the walls which were erected above it.  We packed it densely, then began with our first course of modular wall blocks along a straight line, both in grade and in length. Naturally, after a certain portion of the wall was built, free-standing, we added drain rock behind and a tube draining the collected water and disposing of it off the sides.  This took care of the ever-important hydrostatic pressure which forces many walls out of shape.

We finished the walls and backfilled, compacted numerous times, then began the detail work.  The upper wall did have 2 – 16 foot wide waterfalls, both faced with a beautiful copper tile.  As the water spills over the edge of the tiling, the color comes out magnificently.  In the above picture, we had yet to add the tiles.

The paving area was fairly huge, with small amounts of grass surrounding it.  Lighting was distributed throughout the brick paver patio, inset into the bricks, providing some secure footing when the crowds convened.