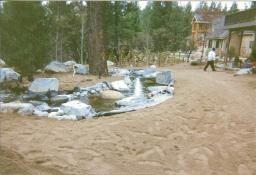 Here is an earlier stage of the work posted earlier featuring the vineyard at the end of what eventually becomes the walkway. At this stage, we had finished the water feature without the trimming and tucking under of the liner edges and had only just finished with the rock placements and the tricky aspects of running pipe and tweaking the system itself.  Obviously this was done pretty much first of all, after the initial cleanup and land-clearing.  What had once been a fairly ratty-looking lawn, seemingly put there as a near after-thought, now is taking shape as a veritably interesting bit of landscaping design.

It gets far more interesting as we complete the water feature entirely and erect the small vineyard in the background.  The access to this site was only one avenue, behind the camera position here. This restricted access implied we had to complete all aspects in the far end before “spackling” our way out with our landscape brush.  So, we did the vineyard, completed the water feature, then worked our way out.  The next phase dealt with laying in a stamped concrete sidewalk undulating through the landscape. The stairs coming down from the upper balcony adjoining the living area to the right where this family did their relaxing and entertaining, had to be included in the walkway as an entry point to the entire back yard.  We did install a small path coursing alongside the house to the rear of this picture, but the truth is it is seldom-used.