This sudden outpouring of uncharacteristic hot weather locally has urged local Spring blossoms to pretty much a “kick butt and take names” modality. While it makes for an unbelievably luscious floral environment, the trees and early-blooming shrubs will close out a bit quicker than is normal. Alas, that’s also fine because the trade-off is this smorgasbord of rioting color and texture which is undoubtedly rare enough to warrant recording.

Here’s a look at stuff around the suburban blocks and neighborhood where I do most of my daily walking: 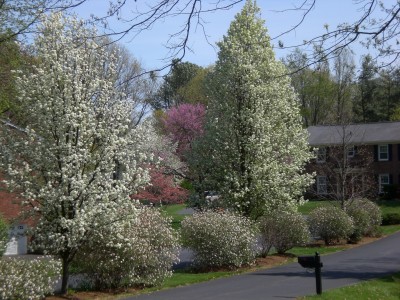 It’s cool the Dogwoods and Redbuds come at the same time as all these Chinese Pears. It mixes texture and colors into these deep dimensions and palettes suitable for painting, like some Impressionist Holiday. 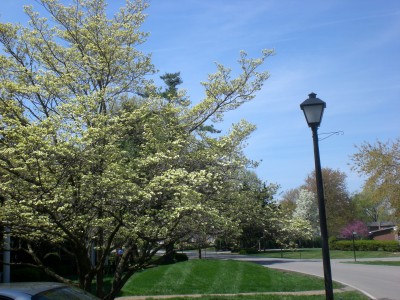 I like that these are normal neighborhood views. The issues of landscape architecture become so much more obvious this way. I finished a great book, recently: “Devil in the White City”, by Eric Larson, a really good writer and a riveting and special book, where Frederick Olmstead was featured, speaking of landscaping at the Chicago World’s Fair in 1892. He was in his 70’s at the time and in poor health, but he did the yeoman’s share of the planning and even the overseeing of this mammoth project. To make a long story short, Olmstead was in the midst of his adamant lifetime declaration that Landscape Architecture be considered on of the classical great “Arts”. His advocacy for the field made many believers, of which I am also one, myself. I have often called landscaping the “Ultimate Cosmetic” – painting structure, form and color into the out of doors in unique and absolutely uplifting ways. It gives humans the right to enjoy Nature, but more so, it gives them the experience, at 360 degrees, of Nature, arranged in human ways to highlight beauty – simply put. This unassuming neighborhood, hard by Middletown in Louisville, fulfills every single possible aspect of that goal. 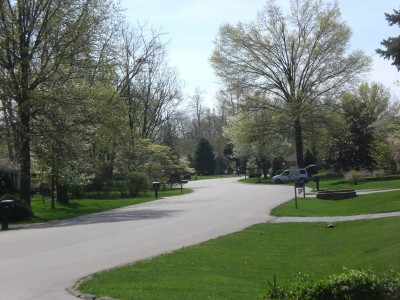 I really adore this neighborhood. The curving streets, the lack of curbing and sidewalks present this lush green basis from which the rest stems. The streets are nice and wide in this very middle class ‘hood and kids and Moms and Dads are always out at the park or riding bikes, destined to enjoy their days. I suppose it is easy to take for granted, living among it all. Yet, it’s also why guys like me are allowed to remind us that it is special. So, what the heck – it’s a living!

The park always looms central to this neighborhood, here in Douglas Hills. It has a public swimming pool, some tennis courts (no softball fields!! Morans!), and acres of expansive and succulent lawn space – just grass, as much as you want. It is also studded with these gorgeous Redbuds, set between the Chinese Pears, which add color and fun, accompanying a cool walking path. 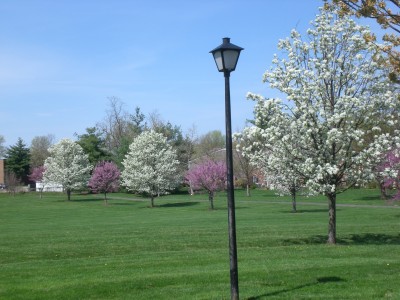 Once again, the view down a side street, with its colorful street scene boulevard, the Korean Viburnums (Tinus), upright Columnar Chinese Pears, Redbud, Dogwood and the rest. It’s honestly hard to get enough of this view for me. I can’t imagine a more perfect timing for capturing these blooms although I confess I am looking forward to what it has for me today. 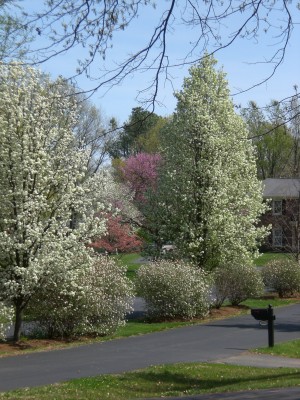 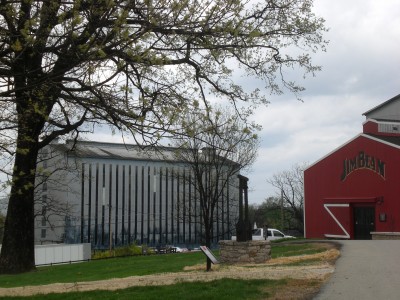 Mother and I passed up the chance to go “tasting” – which was unfortunate. The large warehouses, for those new to Bourbon, hold just thousands of large barrels of aging whiskey. If you drank everything they had inside of just one of those warehouses, you would be drunk for probably 1,000 years. Actually, probably more. Maybe even a billion years. Think about it – and you’d be preserved too! You could be like one of those dead Zen guys, but much more famous. 🙂  An icon!

Anyway, this very famous distillery is pretty much across the road from Bernheim Forest. Needless to say, there is a small clear creek running through both places which is where they get all that great water what changes into something more. Well, it does the same at Bernheim, just better. It changes into life-sustaining gorgeousness.

We’re now visiting the “cultivated” parts of Bernheim – dare I even say much of it is the “Experimental” or at least the “Unique” parts of Bernheim. In all its history, managed by a different set of folks at many turns, there has almost always been the delight of offering species for observation over the luxury of Time itself. Patience paid off in many ways, in spite of recent spates of such tough natural events as Ice Storms which cut a nasty swath through the tops of the forest, laden with a literal 3 inch thick layer of ‘ice rain’ for sub-freezing weeks. The odd tornado has coursed through as well as have your standard average wind storms. Inasmuch as so much of the ‘experimental’ areas are out in the open and consist of most-fragile plantings such as azaleas and rhododendrons, much has also been lost, sad to say. 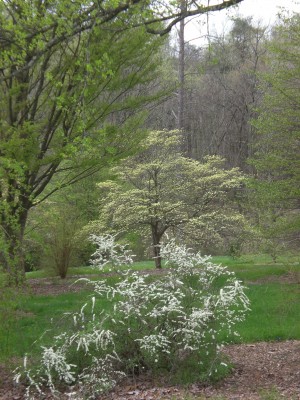 The picture above has all the promise of future glory as this nice Spirea gets going, I’m guessing in about it’s 3rd year. I just liked the tree behind it so much, I was pleased to be able to include this little guy in the picture.

But now we move to the Magnolias. All of these featured here are Magnolia “Soulangiana” hybrids. Frankly, I have never personally seen such a wild mixture all together in one place – anytime, anywhere. It was stunning running across these as Mother and I picked our way through this virtual small forest and every single turn was yet another revelation to me – “The Virgin of Magnoliana.”

We plunge inside, loins girded, as it were, smiles as wide as the one we see here on an experienced, local  “Magnolia-ette” nymph. 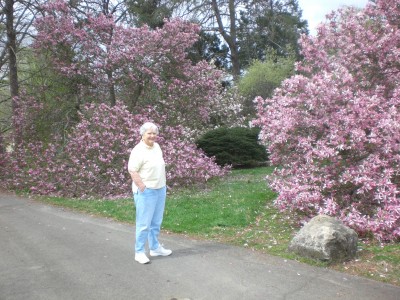 You could say there were “quite a few blooms!” 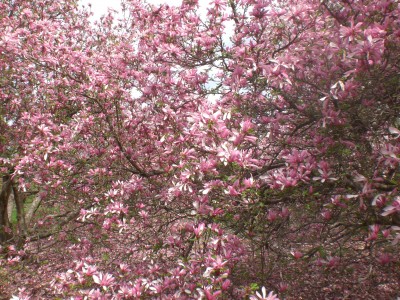 The entry to the grove is this sprawling cacophony of Magnolia Mayhem, probably from the development of plants 50 years in the making. The smells………..Oh My! These dudes smell – a lot! It’s like a Lilac Nasal Massage, only times 20. 😉 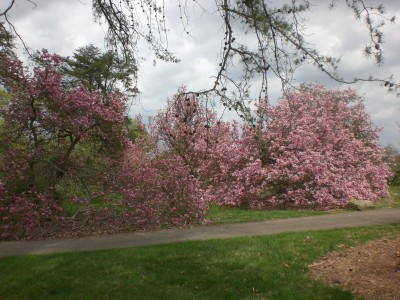 Arranged most interestingly, as we crept through, there were camera-rich opportunities beyond the norm. Each Soulangiana had a certain definite uniqeness, all its own. Some were timed differently as well, opening just slightly earlier or later than the others and each nearly “pure” in its own right, rife with beauty and a luxurious flower, larger than a baseball. 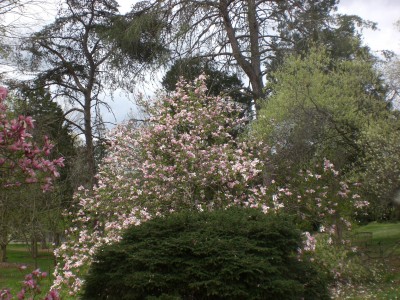 Typical of me, I was distracted  (Look! A butterfly!!)  by a grove of evergreen shrubbery down the hill, the backdrop to the Magnolia Mayhem. I really liked this look. 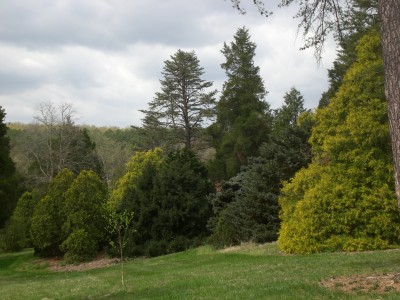 But the Magnolia Love was just beginning – these plants are all about the bloom. Check out this “rather Purple” item: 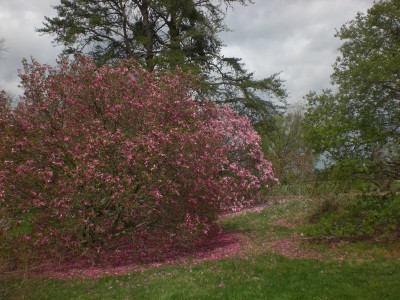 Around the corner we were fortunate enough to run into some of the rarest colored blooms in Nature – here’s a practically brown bloom, I kid you not: (enlarge it) 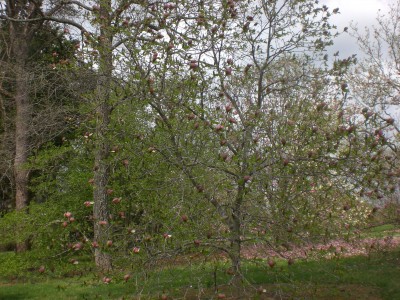 From a couple of angles. Can you tell this one fascinated me?: 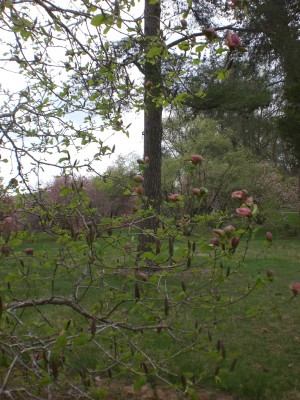 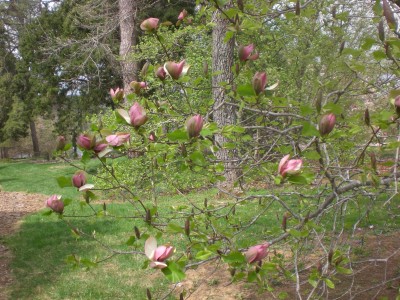 Well, this was moving us now towards the Yellow species – another stark, revelatory moment for this Magnolia tyro: 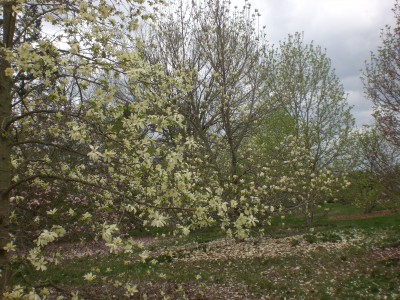 And they were not small, either! 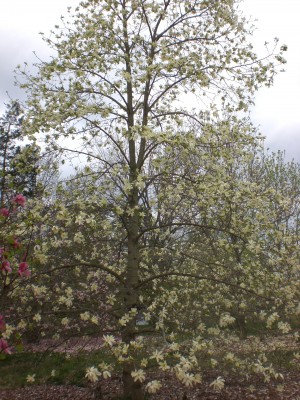 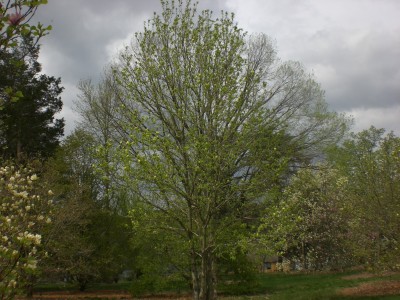 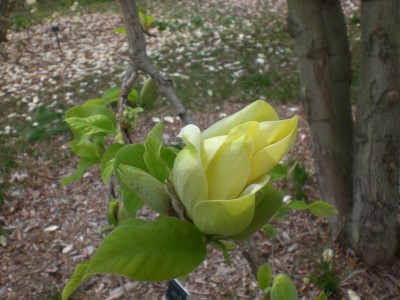 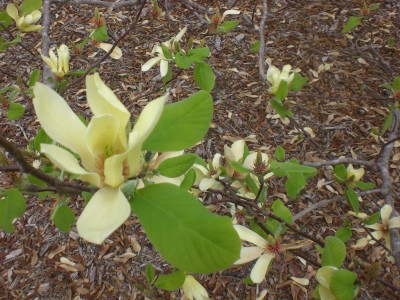 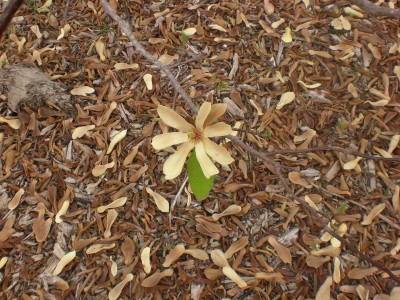 Once more, looking back: 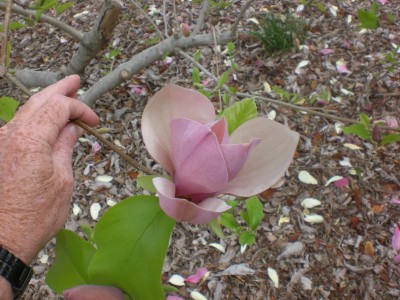 Of course, there’s a “down side” to all this. From here on out, when I see a plant like the one below, from here on out I’ll just go:

“Oh, hey, another small magnolia soulangiana. Listen, I’ve been to the Magnolia Mountain, Bubba. That one is cute, but it ain’t world class. Hahahaha!”…………. “Nice try!!” 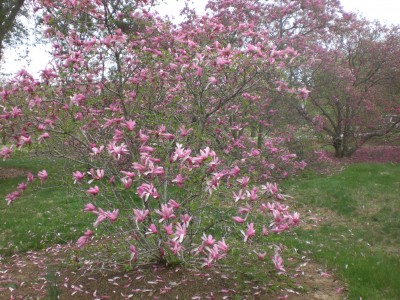 These want to be enlarged – just some random, lacy shots of bloomin’ Magnolias. Don’t get excited: 😉 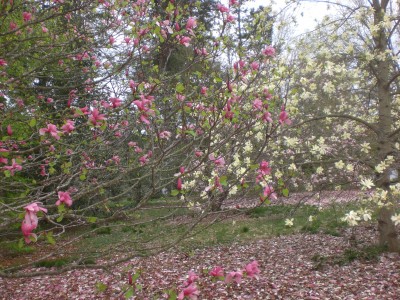 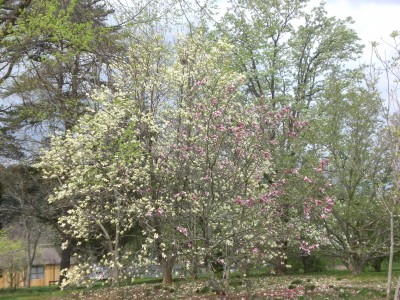 We ran across a Vasey’s Trillium in the roads in the park. Traveling with Mom, she has all these spots covered where she and her walking Bernheim buddy, Sharon, used to walk and check out every inch of territory with a fine-toothed mental comb – or brush. These Vasey’s guys are ‘no bigger than a minute’ – about 4 inches from leaf-end to leaf-end, but they have this gorgeous little effect and they are somewhat rare up this far North. 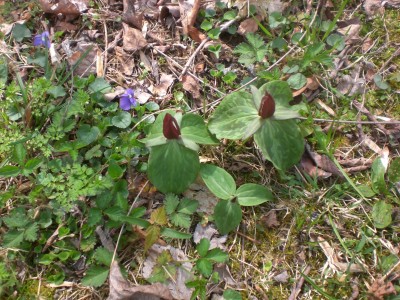 All this action is enough to make a grown Redbud Weep! 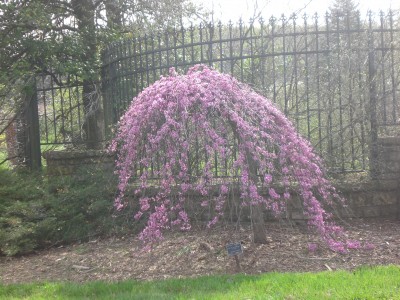