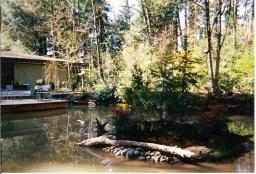 Looking back at the house, the most recent post’s 180 degree angle to this shows the island and the deck’s proximity to the water itself, extended out over it a mere inch above the water. Once again, the sheer peacefulness is overwhelming with a man made creek, not visible in this frame, feeding and recirculating the water, yet still making an undercurrent of the sound of a gurgling creek.

The island was quite the chore to construct even if it did follow some rules of general common sense.  The liner itself required 8 guys to flap and disperse along the 70 foot by 60 foot square area,  It had been glued together owing to the fact that there were no liners then available at that size. Punching a hole in that bad boy would have been an unmitigated disaster.  Thankfully, no humans died during the course of this project!

Anyway, it was and still is a pleasure to look at.