That’s the most important thing. I have to admit to overusing my own resources which see me doing automated and machine-driven work instead of old-fashioned pick and shovel stuff. For me, the excuse to use a machine always wins the race of fun things to do. (There IS that!)  And, yes, I would far rather dig a hole and place a rock using modern technology than by honest shoveling. Let’s just say I have seen both sides of the issue and have drawn a conclusion. It’s a fault! 😉

Here, for example, is a perfect example of that very thing! 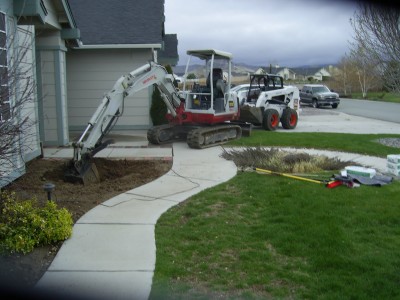 We were tasked to create a small bubble rock water feature at my softball and business partner Bill Hermant’s house in Reno. Actually, I am positive it was his wife LaDonna’s idea, but Bill was warming to landscaping around this time and it might just have been something he wanted. A mystery, fer sure, but she sure wasn’t crying about it!

Anyway, we were using these machines at another project and it was a quick trip down to his place – which was in the neighborhood – so we “reallocated” our machines down to Bill’s place. The portable nature of even the mini-excavator made this all a half-day enterprise, the fact is. So, I dug – for 15 minutes. As The McKenzie Brothers would say, the “Beauty Part” was in how the little mini-ex grabs dirt and then drops it into this other machine – the awaiting Bobcat – which then runs the excavated dirt to wherever Kenny was taking it. For sheer automation, this is a formula from Heaven. 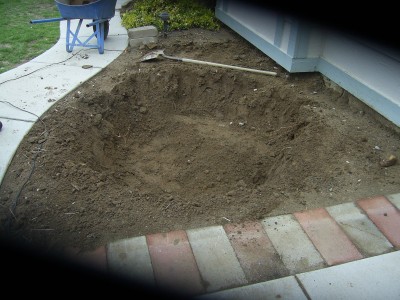 Does anyone else think that’s a great hole? I do. That’s a good hole. Moving along, we add liner, and some additional “protection (additional layers) where the big old rock will sit – 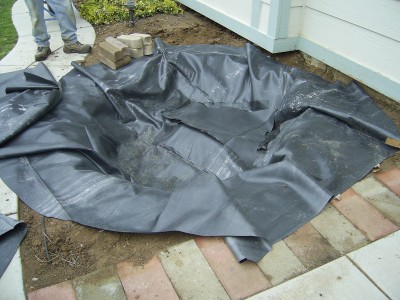 The rock was purchased locally and we had it bored by the firm who supplied it at $50.00 a “bored” foot. Here it sits in the rear of the truck, a chain stuck through the hole and ready to lift – gingerly – out.- It weighs about 600 pounds so, as I have made clear, allowing the machine take the lifting place of a few guys fumbling around with this sort of weight is  – still – the height of wisdom. The number of disasters, from ailing backs, skinned knees, penetrating the liner inadvertently, clothes losses and banging up against a house are pretty long. 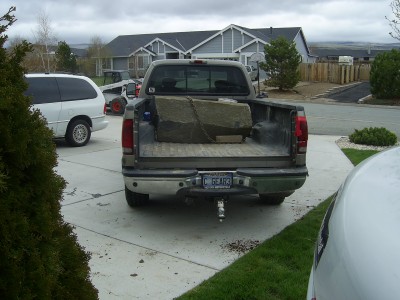 We do so, preparing for the insertion into our great cool hole – 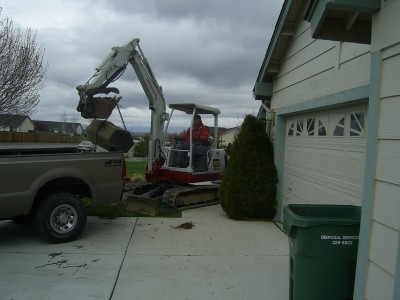 We set it down, then re-grab the thing, so that we have the incline and the angle of approach set well enough from above to insure we set it with a minimal need for reorienting inside the hole. At this stage, someone will be setting either bricks or other smaller rocks in place to rest this big guy on top of. At that time, we will run piping, being careful to keep it from pinching off the stream. Then we will cement it in place – 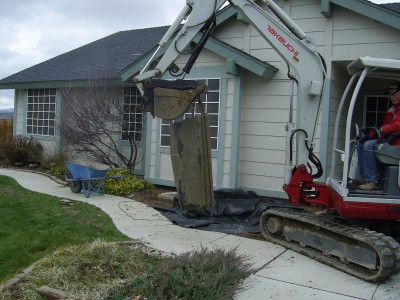 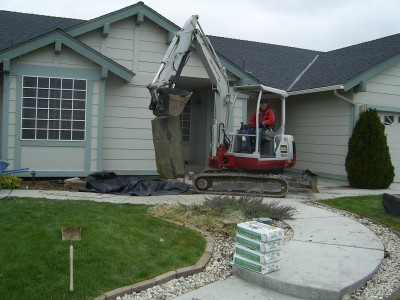 I got a bit carried away doing the plumbing, cementing, lifting, orienting and mixing it up down inside the hole and did not get many pictures of the process at this point. However, the picture below should give a great view of what it looked like down there during the process of plumbing and cementing. Yes, there are two pumps in this picture. The one we are most interested in for purposes of this post is the small black one on the right. Note also the clear and flexible plastic tubing which conducts water up through the pipe to the top of the silicone-grouted top. It connects to the little pump, but in the case of Bill’s place, it gets itself a bit detoured so we can install a control mechanism for adjusting the amount and rate of flow by hand, then returns on down to go up the big ole rock.

Note also the rock in question standing on its own. This is the set-up when cemented into place. 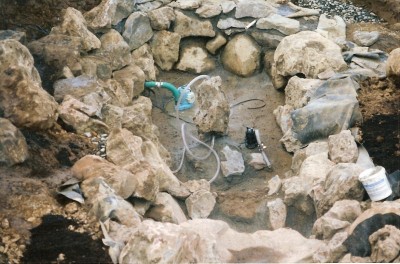 This was actually a pretty quick project. We cemented everything into place, then returned the machinery back to the other project where we finished the day. Then, the next morning, we dropped by Bill’s, ran the pump, got satisfied, then re-filled the hole with river rocks and an attractive top and finished her up by pretty much break time.

Here is the final product – a nice gurgle at the front entryway which always attracts a small crowd who love the sound and the effect. 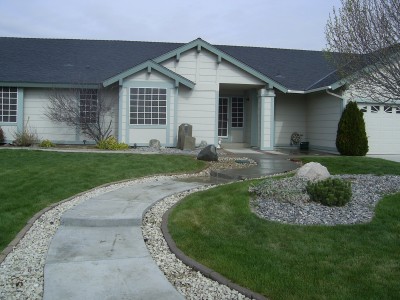 10 thoughts on “How To Make a Bubble Rock Water Feature”