This one’s not about gardening, but that doesn’t mean I don’t think my fellow landscapers and gardeners won’t like it. They will, actually.

No, this one is about a game and a sport and a team. And it’s also about pride and an unsolicited human concern for dignity.

This one is uplifting. We are all better for reading it.

I rob Rick Reilly’s column at least once a year. Two years ago I posted his article on a Texas high school football team who scheduled a team of incarcerated kids. The hosts’  parents made them feel welcomed and like real social achievers – respectable athletes instead of criminals to be feared, by cheering for them by name during the game and by being friendly and open. According to Reilly, the looks on the faces and the happy smiles on the kids as they left made the entire Millennium better by degrees.

This story is quite similar. Once again, Rick Reilly gets my vote a Writer Mensch Of The Year, simply by pointing out some of the touching events which still occur between caring human beings.  Enjoy!

For love of the game 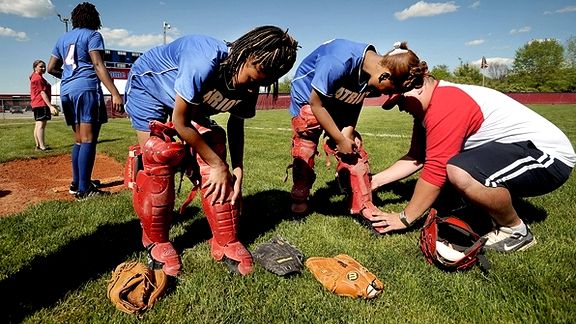 We live in a world where Peyton Manning walks off the Super Bowl field without shaking anybody’s hand. Where Tiger Woods leaves the Masters without a word of thanks to the fans or congratulations to the winner. Where NFL lineman Albert Haynesworth kicks a man’s helmetless head without a thought.

So if you think sportsmanship is toast, this next story is an all-you-can-eat buffet to a starving man.

It happened at a junior varsity girls’ softball game in Indianapolis this spring. After an inning and a half, Roncalli was womanhandling inner-city Marshall Community. Marshall pitchers had already walked nine Roncalli batters. The game could’ve been 50-0 with no problem.

It’s no wonder. This was the first softball game in Marshall history. A middle school trying to move up to include grades 6 through 12, Marshall showed up to the game with five balls, two bats, no helmets, no sliding pads, no cleats, 16 players who’d never played before, and a coach who’d never even seen a game.

One Marshall player asked, “Which one is first base?” Another: “How do I hold this bat?” They didn’t know where to stand in the batter’s box. Their coaches had to be shown where the first- and third-base coaching boxes were.

That’s when Roncalli did something crazy. It offered to forfeit.

Yes, a team that hadn’t lost a game in 2½ years, a team that was going to win in a landslide purposely offered to declare defeat. Why? Because Roncalli wanted to spend the two hours teaching the Marshall girls how to get better, not how to get humiliated.

“The Marshall players did NOT want to quit,” wrote Roncalli JV coach Jeff Traylor, in recalling the incident. “They were willing to lose 100 to 0 if it meant they finished their first game.” But the Marshall players finally decided if Roncalli was willing to forfeit for them, they should do it for themselves. They decided that maybe — this one time — losing was actually winning.

That’s about when the weirdest scene broke out all over the field: Roncalli kids teaching Marshall kids the right batting stance, throwing them soft-toss in the outfield, teaching them how to play catch. They showed them how to put on catching gear, how to pitch, and how to run the bases. Even the umps stuck around to watch.

“One at a time the Marshall girls would come in to hit off of the [Roncalli] pitchers,” Traylor recalled. “As they hit the ball their faces LIT UP! They were high fiving and hugging the girls from Roncalli, thanking them for teaching to them the game.”

This is the kind of thing that can backfire with teenagers — the rich kids taking pity on the inner-city kids kind of thing. Traylor was afraid of it, too.

“One wrong attitude, one babying approach from our players would shut down the Marshall team, who already were down,” wrote Traylor. “But our girls made me as proud as I have ever been. … [By the end], you could tell they were having a blast. The change from the beginning of the game to the end of the practice was amazing.” 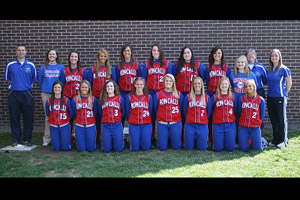 Roncalli wasn’t done. Traylor asked all the parents of his players and anybody else he knew for more help for Marshall — used bats, gloves, helmets, money for cleats, gloves, sliders, socks and team shirts. They came up with $2,500 and worked with Marshall on the best way to help the program with that money. Roncalli also connected Marshall with former Bishop Chatard coach Kim Wright, who will advise the program.

“We probably got to some things 10 years quicker than we would have had without Roncalli,” says Marshall principal Michael Sullivan.

And that was just the appetizer. A rep from Reebok called Sullivan and said, “What do you need? We’ll get it for you.” A man who owns an indoor batting cage facility has offered free time in the winter. The Cincinnati Reds are donating good dirt for the new field Marshall will play on.

“This could’ve been a thing where our kids had too much pride,” says Sullivan. “You know, ‘I’m not going to listen to anybody.’ But our kids are really thirsty to learn.”

And they are. Marshall never won a game, but actually had leads in its last three games. In fact, it went so well, the players and their parents asked if they could extend the season, so they’re looking to play AAU summer softball.

Just a thought: Major League Baseball is pulling hamstrings trying to figure out how to bring baseball back to the inner city. Maybe it should put the Roncalli and Marshall girls in charge?

Anyway, it’s not an important story, just one that squirts apple juice right in your face. And who knows? Maybe someday, Marshall will be beating Roncalli in the final inning, realize how far it has come, and forfeit again, just as a thank you.