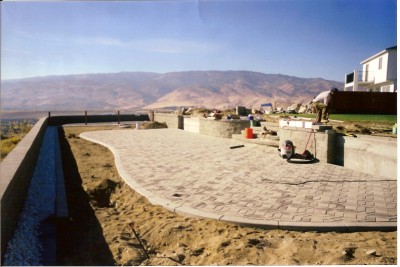 These are all taken either during or after projects we’ve done over the years. I have always enjoyed working with brick pavers. They not only carry a sense of permanence but they also actually personify the idea of permanence. I cannot think of many projects I’ve been on which would not outlast the homes I put them around, frankly. Done correctly – with ample drainage and the solid work of the bases underneath them, paver driveways and patios are 100 year things.

This project was pretty darn big. We had to make the small lake first, set rocks, then essentially rework the entire driveway into something much, much more. The pattern we used was a rather maddening one, requiring each panel to be laid in alignment with those laid previously. The “maddening” part came with whoever or whatever had been done prior to your work. This is a pattern which calls for absolute perfection or the result will be a big old Fail. Notice how the pavers getting ready to lay are all piled up on top of what’s already been done. They are like that because of the many variations in size and angularity of the bricks, all pre-formed to a specific pattern. Inasmuch as there were upwards of 8 different sizes and shapes involved in this complex pattern, knowing what order they go down in was a huge back, leg and head-saver. 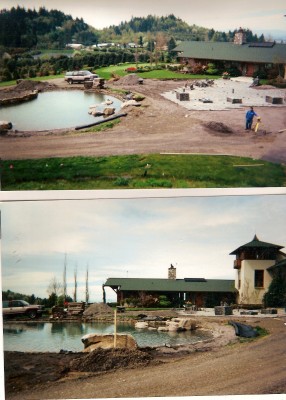 Sometimes the sheer scale of the project was a bit intimidating. I once took a two man crew – and myself – to Northern British Columbia – Bobcat on my truck – to lay a walkway and outdoor terrace for the hockey rink and City Hall being constructed in a brand new mining town. When the trucks began arriving, they literally didn’t stop. 18 flatbed semi-loads (with trailers!) soon showed up, each containing around 24 pallets of pavers. Unloading them alone caused palpitations. It was also so far North, it led to bizarre conversations such as this:

Bradley: “Um, it’s 11 PM, Boss. Hey, can we go watch the Grizzlies out at the dump later?”  ………….Ouch!  😉  This went on for more than a month. The overtime was wonderful for the guys but their girlfriends were mad at me. And we were good! 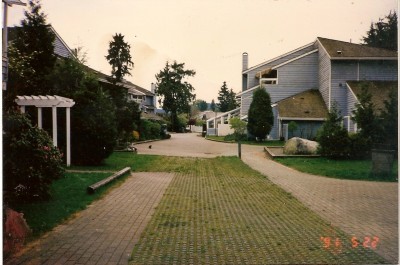 This project was one of those Endless Deals. 20′ wide, these are “fire lanes” which course through this condominium project for a bit over a quarter of a mile. The picture below is around the corner of the one above, to give an idea. This is Vancouver, by the way. We did this one around 1983. It hasn’t moved much. 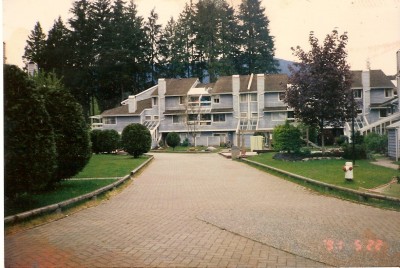 But my favorites tend to be the more artistic, small projects, geared to please. Here’s a killer little rear yard patio that won an award in its price range: 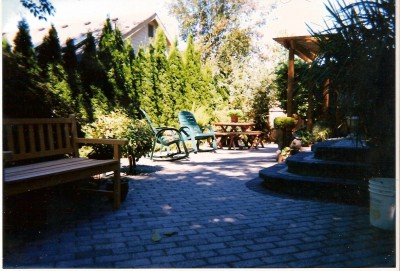 Lots of cutting pavers where that set of steps makes such a sharp turn. The concrete steps which were already in place allowed us to apply the pavers by using paver adhesive which has worked marvelously to this very day. The small walled garden and our added arbor feature add an upward element which I always liked.

The angles here, at a 45 degree line with the home, actually served to give the impression of some complexity and of additional width. We actually reversed the angle at two points, as an interesting design contrast, separated by the colored border bricks.. 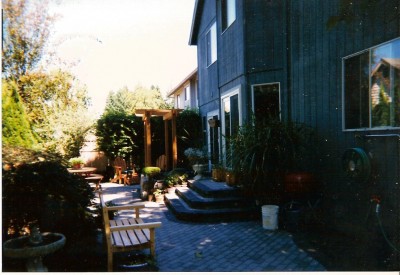 Paver Glue also allowed us to place new bricks over this formerly solid and glaringly white expanse of concrete which came with this home – a home and project featured in this blog in many other places. Pavers adhesives are an unbelievably mature science now. Their versatility and powerful grip is a refreshing tool I have watched enter the installer’s arsenal of tricks. 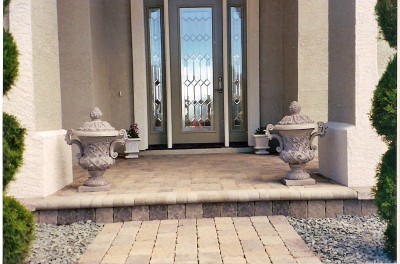 The function of brick pavers as a design element serves many things. Strictly considering design alone, it offers a practical and far “softer” layer than pretty much any other surface outside of natural stone slabs. The amazingly varied colors and styles of pavers combine with the patterns to make something nearly organic – or at least biomorphic –  in spite of its pure cement content. That they are the strongest available material for paving is just gravy. 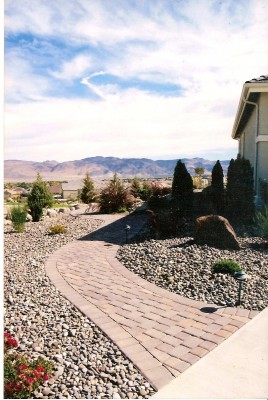 Anyway, enough for Part 1. Part 2 will have the dancing girls and my special “Brick in Every Toilet” speech. Stay tuned!!