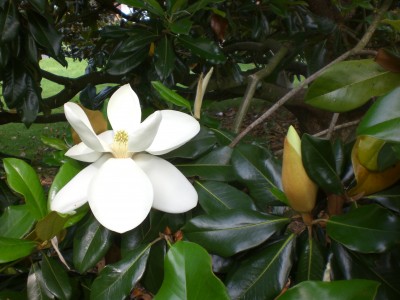 The Southern Magnolia – or Magnolia Grandiflora – is a literal symbolic “Tree of The American South”.  Most comfy in a habitat that stretches across the southern portion of the Southeastern-most states in the U.S., this gorgeous evergreen  prefers the muggy Summer, sub-tropical heat and humidity which mark the climate of this area. It is actually hard to determine which is its most beautiful characteristic – whether it is the deep green and extremely glossy leaves which – when turned – show a brown and green underside of velvety texture, or whether it is the uncommonly lush and gorgeous creamy white blooms which stud the tree at the height of its real glory. Late Spring and early to mid-summers, this tree is nearly unmatchable in its grandeur and striking beauty. That the flowers themselves are slightly aromatic makes it something more along the lines of a massive Gardenia in many ways, a plant which shares its native habitat comfortably. 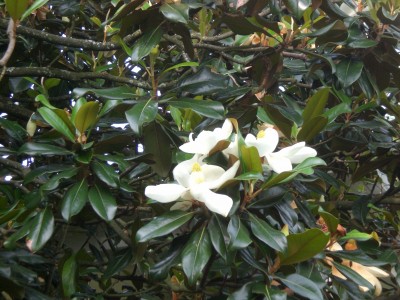 Once I personally discovered a few of these fancies  growing reasonably well in Vancouver, British Columbia – when I designed and worked there – I became something of a ‘Johnny Appleseed’ for the Grandiflora. Just on the merits of foliage alone, this gorgeous tree stands apart for general appealing color and texture. That hardier cultivars had been developed also helped as well, although, to be honest, it was and still is a novelty plant for the most part. But it most definitely augments garden areas wonderfully with its medium growing size and those dynamite deep green evergreen leaves.

It is an unbearably and usually fatal chore to try and transplant, unfortunately. It has a rather unusual root system – Unlike most other trees and shrubs, the roots are largely un-branched and rope-like. For this reason, magnolias tend to suffer more than many other trees if they are moved after they reach a large size. Most magnolias can safely be moved if the trunk is less than four inches in diameter. The bottom line is always dig as large a root ball as you possibly can, use Vitamin B and water frequently. If they’re big ones, good luck! 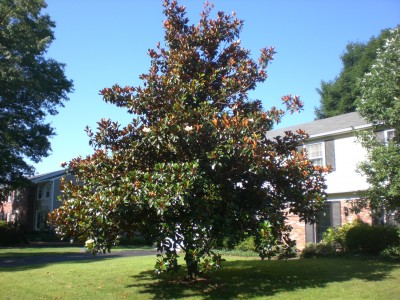 In Louisville, Kentucky, where these pictures have recently been taken just browsing the local neighborhoods, this year’s incredibly muggy and hot weather has really pushed them to some extremes of beauty. The cup-like blooms are getting progressively more plentiful, reverting somehow to their genetic bases of heat, humidity and sun.

These pictures are all taken during my local walks here in Louisville. People are now used to seeing me trundle up by their houses, camera in hand, getting inches away from their flora. Funny enough, it’s a great way to meet people, as long as you are rude and thoughtless enough to trespass! 😉  Of course, once they find out that you actually know a thing or two about landscaping or gardening, next thing you know, you’re walking out back and advising on plants or designs. Hi Henry!!! No more Banana Plants!! 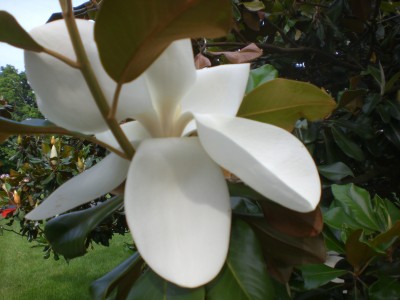 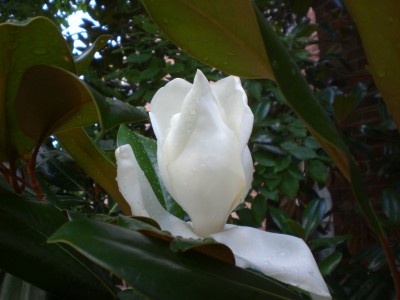 Just as in the case of the Portland Chinese Garden, a well-cared-for Banana Plant can actually do its thing in Louisville. The biggest concern is “Will it overtake my home??” Here is a shot at an early stage of a local Banana. 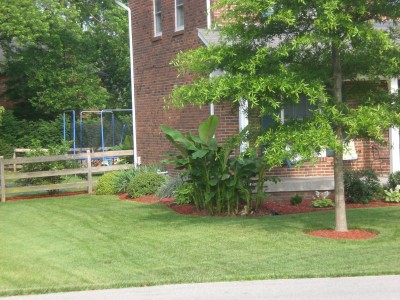 And here is a shot of it, less than a month later. You can see it grow! 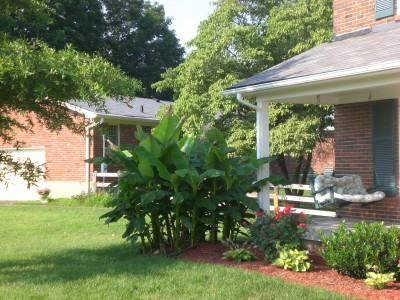 Almost as cool as the Louisville fascination with Clematis on mail boxes! (This one with a bit of red-blooming Honeysuckle on the other side.) 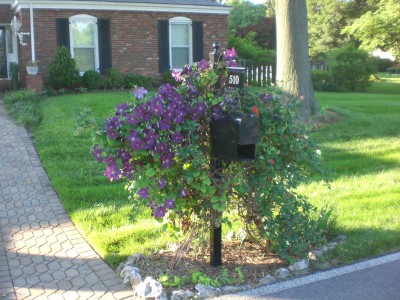 One more Magnolia Bloom. These suckers are hard to get away from! 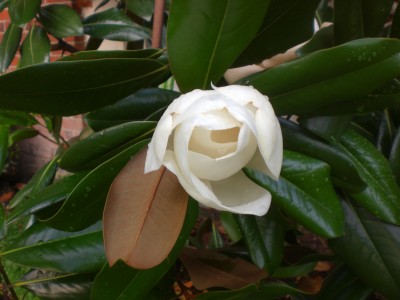 2 thoughts on “The Southern Magnolia & Louisville”