We revisit a favorite topic of mine and one into which I have invested hefty energies, through the years. 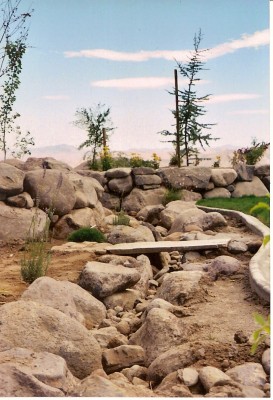 Stones. Rocks. Boulders. And even their smaller children, if such a thing can be said.

Particular individual rocks such as the one below from Reno, Nevada are among my very favorites. Igneous by origin, attached with fascinating lichens coloring things up dramatically, these solo rocks are completely entertaining by themselves. There is a nearly embarrassing richness of these in the surrounding hills and valleys of Reno and I would often encounter them just beyond a property line then shamelessly scoop them up for my own selfish decorative uses, I admit. Typically, I would be taking boulders whose lives as natural beauties was on a limited time span anyway – as the neighborhoods developed farther out.  I pretty much stick to a rule of sticking within eventual expansion boundaries, for the record. Anyway – Handling them always presented a big challenge inasmuch as pretty much the last thing one wanted to do was erase the lichens. So rolling them was definitely out. Once again, we thank the Machine Lord for providing clamps and buckets for extracting these rocks in relative pristine fashion. We would even use chains and padding and lift them gingerly with our machine buckets 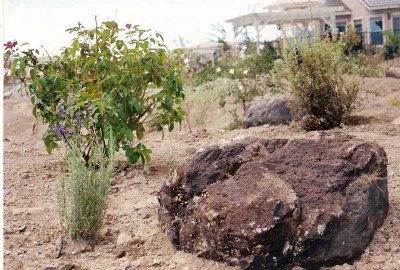 It was difficult to stay way from a tendency to want to make a totally Lunar Landscape out of this one. The boulders used here were all “on site”, parched and par-broiled in the sun up on the ever-sunny slopes of the foothills in the Caughlin Ranch estates in Reno, Nevada.

The above  was taken at a rather raw phase, soon after installation. It does indeed look quite “Lunar” – which is exactly what the lady of the house said as she watched it develop. Yet, it morphed into something alotgether different as time moved along, allowing a future where pruning and ignoring plants and surrounding effects could determine what look one wanted to cultivate – Lunar or lush?

There are some stunning igneous rocks in this lot. Enlarging this view, below, hopefully some of the color will come out as we check the boulders in the foreground. Honestly, many of these stones told stories all by themselves. It often felt like dealing with literal personalities.

Then we come to the “rolling thunder” edition of “Rockeria” madness and the role and placement of larger, glacial or river-produced stones – rounder and ‘softer-effects’ sorts of rocks. For these, which can also be featured in the right spots, there is beauty in simplicity and plain size.

I’m going to divide this stream of posts up a bit more than usual. I’ll also enter them a bit more often.