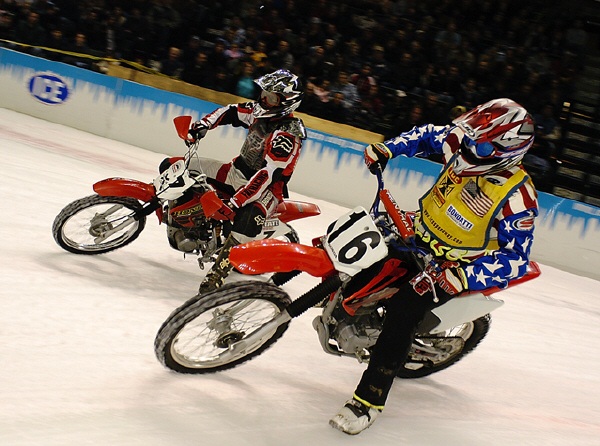 The over-sized racer on the inside/right, above, is my good friend and former business partner, Bill Hermant. The camera is not deceiving anyone – yes, he’s is that much bigger! This particular shot, as I recall, comes from a race in Denver, Colorado where he continued a pretty good year in 2007 with a 7th place finish in the World. And just ignore the couple hundred cleats on those tires, too. Bill was an interesting entrant in those races for a number of reasons – one, he was over 50, racing in a sport with a slew of 20 something’s and, two, because he is 6′ 3″ and around 210 pounds, hardly the predictable size either in a sport where the average size and weight is usually around 5′ 9″, 155.

That’s my Reno friend and ex-business partner, Bill Hermant, who is among the 5 Most Interesting people I have ever met in my life. This rough-and-ready guy meets every criterion as a “Man’s Man”, yet to watch him with his lovely grandchildren, you see a heart as big as the sky itself. He has the love of his very devoted wife, LaDonna, of his children, Kim and Bill, Junior, and of his employees. He also scores lots more love when he sponsors or else runs the softball teams I had played on for over a decade.

Most importantly, when the time comes, if necessary, this guy goes to war for you. We’re talking always. Bill is a man of intense loyalties. He has been ‘let down’ by his friends more than once, but in the Dictionary, when you look up the term “Loyalty”, then Bill Hermant’s mug shot should be right there.

Here is a shrunken ‘screengrab’ shot of what Bill actually owns: 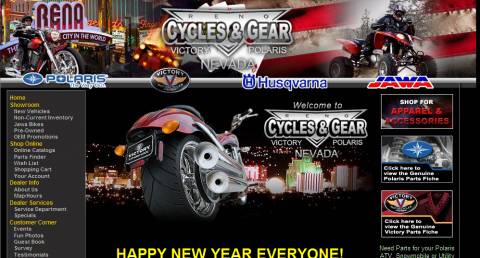 Bill began selling motorcycle parts for a living while living in Hayward, California. Bill grew up across the bay, in San Fransisco. Living in South San Fransisco, where the streets can be just a bit “mean”, Bill used to be a regular at Giants games in Candlestick Park. In fact, maybe one of the funniest things he ever told me was that he thought every kid went to hundreds of major league baseball games as a kid.  😉  He was literally shocked when he heard that wasn’t always the case. But his upbringing grounded him and made him a very focused business person later in life – a focus he has always maintained to this very moment in time.

Anyway, he moved to Reno in about ’95 or so, setting up his ‘Reno Cycles & Gear’ brand and store. Here’s where he moved and also why he decided to ask about maybe partnering up in landscaping. He needed help, lol. 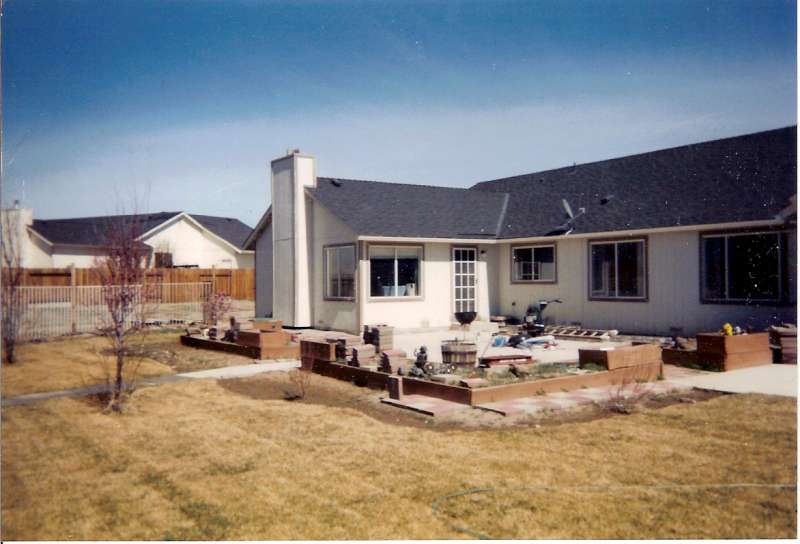 Bill had developed a huge love for the game of baseball, then “mutatis mutandi”, softball. It was here – adult, slow pitch softball – where we met and subsequently stayed on teams together, playing literally hundreds of games over long years, fellow junkies for sports mutually committed to our passion, 100%. We honestly appreciated each other for a mutual competitive fire. As I got to know him better, I began to realize what a great and doting Grandad he was. Little Serena – who is not so little any more – would agree. 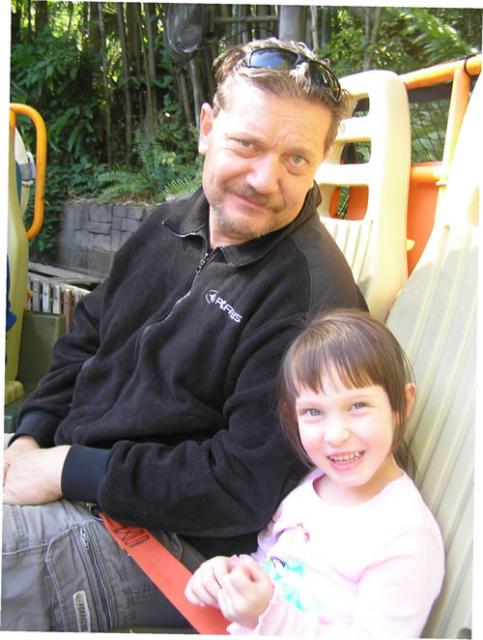 Then, incidentally,  when I found myself out of work one Autumn……..we’re talking at the worst possible time for a landscaper to be out of work in Northern Nevada,……. Bill saw my need – (and he showed me his personal residential need, lol) – and we developed a game plan to make a run at business together. Bill sprung for the purchase of a Bobcat – and a killer, heavy duty one at that which we bought through our third baseman, Brent Adams, (another oft-overlooked benefit of actually playing sports) which was in excellent, though very “broken in” condition. We bought a cheap little truck and we were off to the landscaping races. With the Bobcat, we went a little crazy and then accomplished a few wonders around his home.

We made a small creek and waterfall way out back at his home which Donna was so crazy about she kept her window open at night – in Winter – to be able to hear it. It started humbly enough – man it was dusty back there. 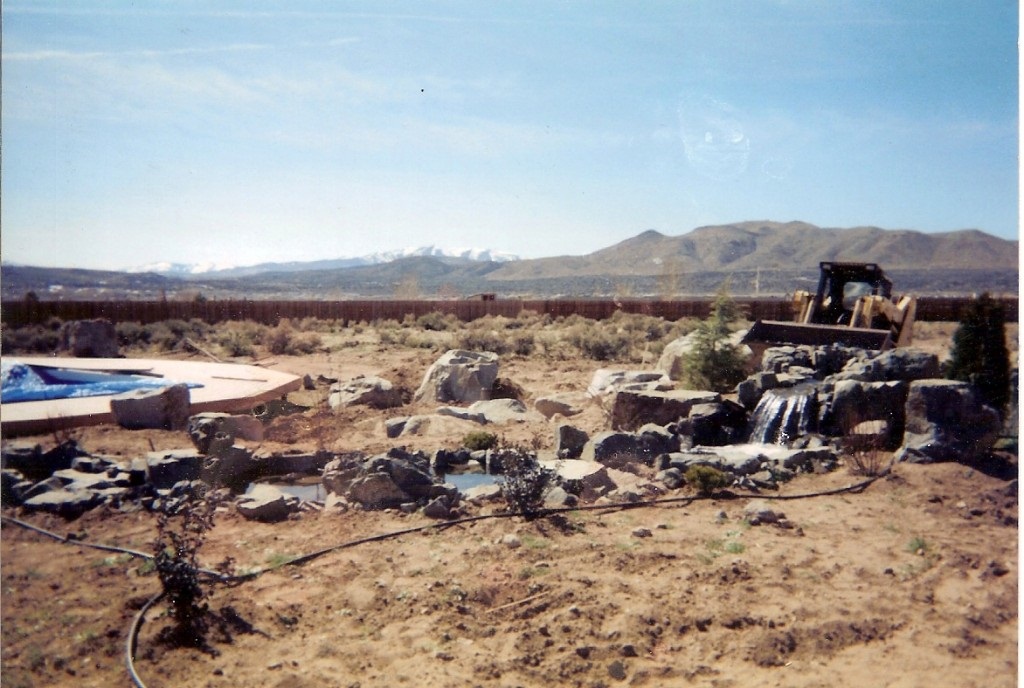 It evolved. Bill’s first comments as we were installing the first plantings were something along the lines of: “You mean I paid $350 for those sticks??”  😉  Hell, it turned out Bill was normal! He didn’t know Jack Squat about landscaping!

The “sticks” worked out just fine, OK, just as our softball team did. He smiled later. We went from this……… 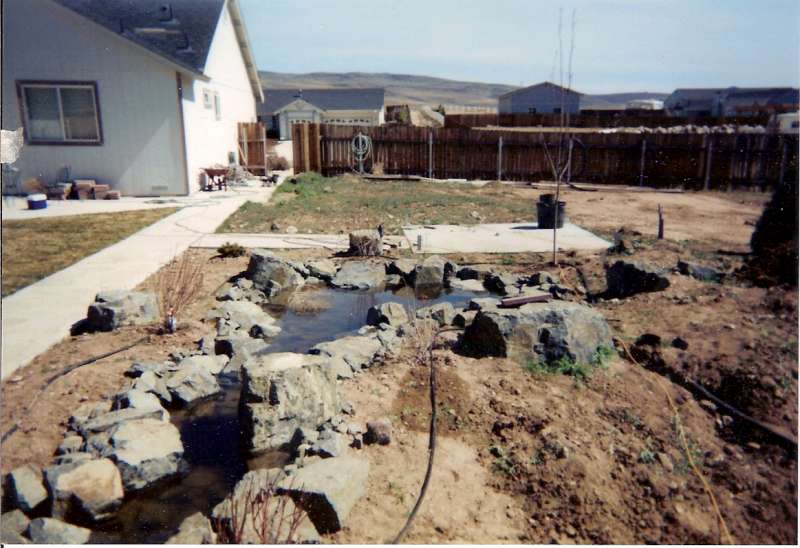 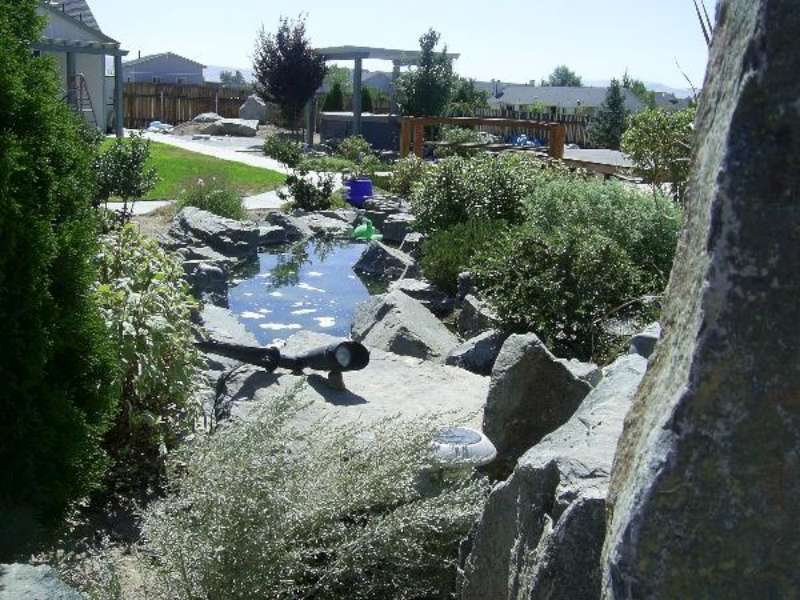 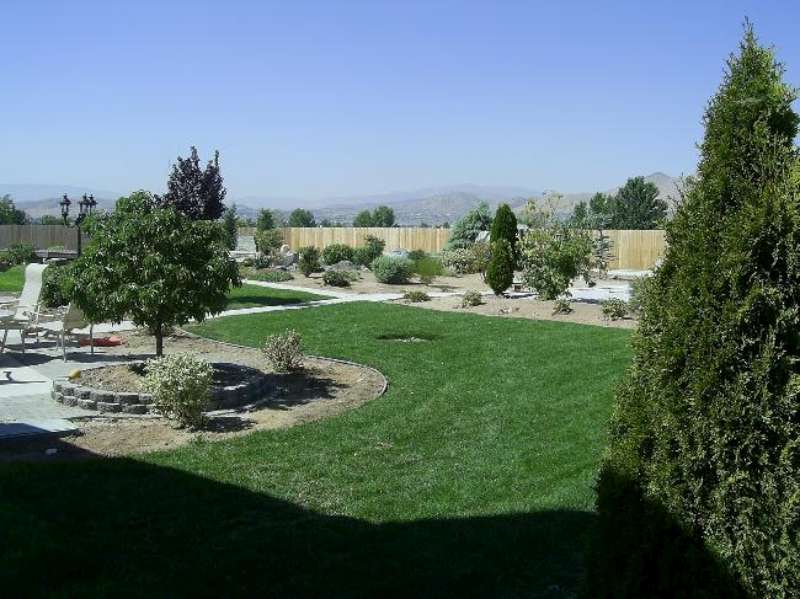 And this………………. and then it was just the other parts of the bizz and sports we spoke of. At home, life was good. 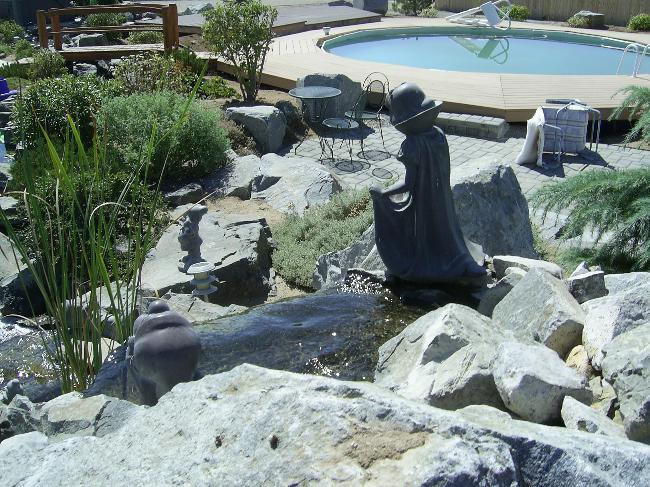 Bill became – or always was – crazy about participating in sports in general. This is a key element here. He didn’t spend his time watching – this is a guy who wants to be in things, deeply. He was never the most gifted athlete, but Bill found ways to make himself valuable  in softball. He used strength, great reflexes and plain competitive spirit to lead every team he played on to just a little higher plane. We could lose games and he would often get morose, lol, while the rest of us were on our way to grab beer and yuk it up. Naturally, we pulled him hard enough in a bunch of cases to make sure he joined. No one wanted Bill frowning. But also, no one missed his reaction, either. His is the sort of influence you can’t buy.

Bill loves to race. He has become every bit the motor head but his competitive spirit is far more in tune with racing things. Bill loves speed, mechanical crap and loves to race. He raced often in Auburn, California in car races, on their dirt track. He still does. More importantly, however, what Bill ended up happening onto was the bizarre, crazy and hyper-competitive Ice Racing field, which he jumped into in the mid-90’s and which this 50-something meat eater even still enjoys.

He is quite highly-regarded in Europe, where this sport was actually invented to give the amazingly huge number of motorcycle racing fans something to watch during Winters in the off season. What happened instead was the bloom of yet another wildly popular racing niche which became an organization and category all its own. He once showed me an interview he made with an English magazine, where he spoke about how invigorating it was to race in front of relatively huge crowds of Europeans who, he said “Already know who I am.”  Hell, he had fans, 6,000 miles from home!

Naturally, among other things aside from international Notoriety, what became of all this was an incredibly long and varied litany of injuries. He is also one of the the hardest-headed humans in history too. Just ask Donna!

Once, he and Donna flew to Washington, DC because the airport in North Carolina had been ‘snowed out’. It was during a real mega storm, dropping 3 feet of snow on the Eastern Seaboard. He had a certain number of hours to make Greensboro in time to race so they rented a car and drove, he and LaDonna. It sounded very thrilling as they did indeed make it on time – but just. By the time he got out of the car, it was almost race time.

On his first lap, someone takes him out and he crashes face first into the hockey boards (all indoor ice racing events are in hockey rinks). He breaks his nose and really hurt his shoulder, as I recall. (I believe the legs were another year  😉   )

Anyway, what he remembers is looking up, dazed, and some woman pointing at him and screaming “Oh my God! Look at his face!!” Knowing Bill, he had blood spattered all over himself. Another ghoulish portrait in Red!  😉

The world can be cruel. Well, he made all the other races that day, broken stuff and all and then flew home for his patch-up. After all, there was softball within a couple weeks. No one could picture that scenario – LaDonna, his wife was apoplectic about his even thinking about practicing in his various casts (a yearly lament, lol) –  but he proved up to the task! And we probably won our softball championship as per usual. There were quite a few.

I go on about all the personal stuff because he is just easy to talk about. But there’s more to him.

Bill has historically given oodles of time and energy to Reno Special Olympics. He has a depth of concern over infant retardation which might just be his finest quality. And let me include his lovely wife here as well. He can always be counted on to donate time and green energy to this cause, as well as many others.

His social standing in the community of Reno is large and respected. His premises host the yearly Christmas Ride Rally For Tots, an event where bikers gather presents for disadvantaged youth. His shop also hosts a very cool Reno-specific festival called Street Vibrations, which is a motorcycle equivalent of their famous Hot August Nights. With the local Harley Davidson dealership, Bill and his Reno Cycles & Gear provides a place for partying and collecting. 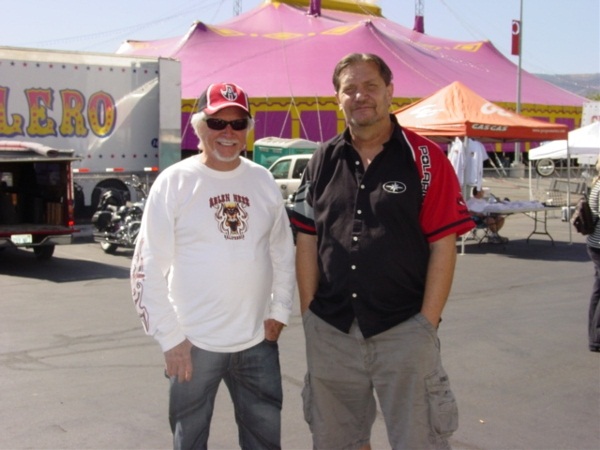 And here is probably what Arlen arrived in Reno riding (The Victory Vision): 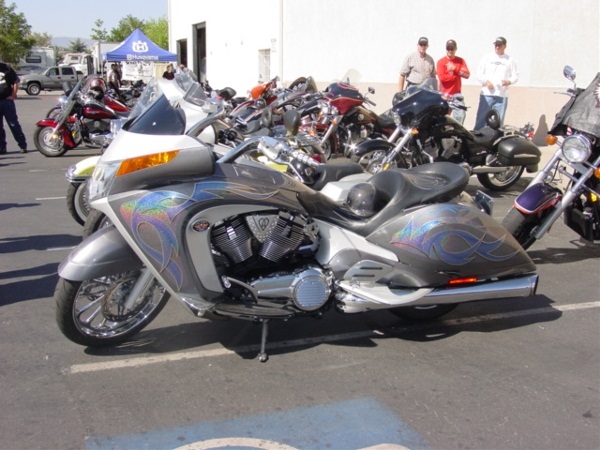 Bill sells more Polaris off road vehicles than any dealer west of the Mississippi. His shop is probably the best shop in Reno. He speaks with clients personally and in depth, not just to sell things, but to ascertain and assess their needs. He advocates spending wisely.

Bill and I oversaw a 5 year run of varied successes. In the end, the economy reduced our chances at success to pretty much zero with the advent of the Economic Crisis and I have to admit to my own personal exhaustion causing the end of our run together. He would never have given up, the truth is. I admit this freely.

Our successes were pretty cool, however. We did tons of great work in all sorts of different ways – using the newest machinery and products and constructing the bulk of projects we see in this blog. Yes, almost everything in here which is Reno-based was done during our partnership. He loved visiting projects, knowing the working guys intimately, signing paychecks, rubbing elbows with clients and simply developing the business. He had far more business acumen than I could ever dream of possessing. And far, far more patience.

It was also very cool talking in the third inning of a game where our opposition was spitting nails in frustration as we paraded to the plate scoring huge runs, when Bill would lean over and ask: “How’s Juan’s back?”

Bil Hermant – extremely good businessman, high achiever, a loyal and fantastic partner and a hell of an interesting man.