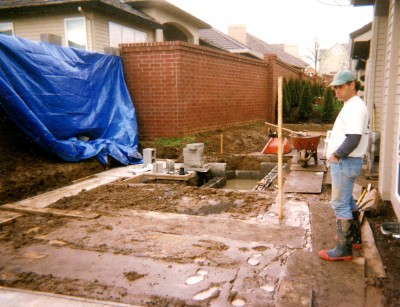 My good and hard-working friend Rick Barrett analyzes his most recent impossible situation, looking for clues. We got a call from a designer in Portland who designed this most interesting water feature from the comfort of her drawing board. While we agreed it would be a beautiful edifice, we also wondered just how we’d pull it off. The notion of hanging the deep black slate, composed of various thicknesses but the same color, off a block cement wall posed some bizarre and – to us – new material. It would have to be cement, owing to the varied thicknesses of the slate. All sort of adhesives could do the job, but the thickness thing hung us up. We needed a material which would allow us some “squeeze room” in order to have the absolutely perfect outer dimensions to align. Anything other than perfection – with water flowing over it – would show up like crazy.  And this referred not only to the top lip, where it would be grievous if not straight, but the front and sides as well.

Of course, I neglected to mention that the plan also called for adding real rocks at the front and a corner of both levels of the falls system, making the cement idea even more emphatically needed. 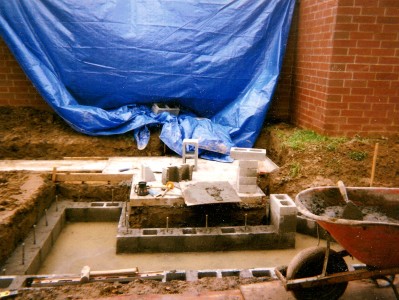 So we arrived at a conclusion – erect the walls first, then nail burlap to the block walls, which would give the cement something to grab onto. It would also allow us just enough “wiggle room” to align all the slabs of slate so that they matched at every possible angle. Now, inasmuch as we are working with a natural stone product, total perfection would be absurd, layered and split as they are. But I believe Rick  got very, very close. 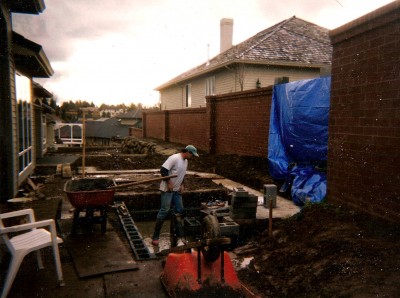 I missed many episodes, picture-wise, as the construction proceeded, which I now regret. Often, we were busy elsewhere from the rear of the home, working on the landscaping out front or one the sides, which involved irrigation and the construction of some garden carpentry projects.  Rick did almost every bit of the water feature by himself. He also – it bears mentioning – erected the stone walls. I thought his work was masterful and so did the client and even the designer.

The blue tarp, for the record, was not only handy for preventing the brick walls from getting splashed with wet cement or from the splatter from the debris of brick and stone-cutting, but it also doubled as a “rain roof”, keeping the guys and the stuff dry.

Generally speaking, here it is on the day we pretty much left, all done up and proper. 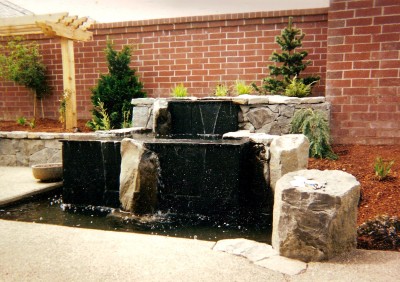 Quite a change from the first shots…………..note the stones – and not only the Basalt Chrystal cemented around using that “exposed aggregate” concrete finish. Note as well the insertion of natural stones by the bottom basin as well, sort of stuck into the patio floor finish. It added a natural touch. The patio is also cantilevered over the water, allowing us to hide the water pump which sits in the bottom basin. There is far more to this project than meets the eye, I guess is what I am saying. 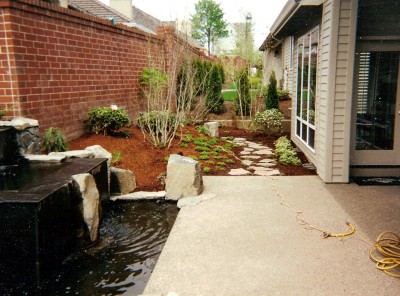 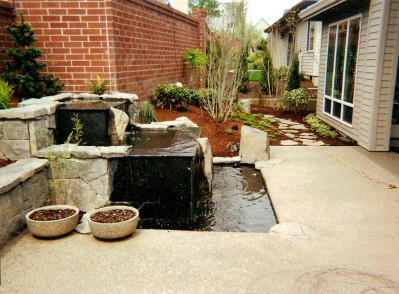 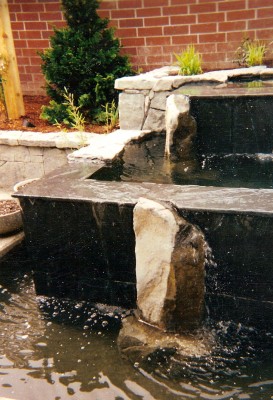 With some cool garden carpentry in the form of these trellises. 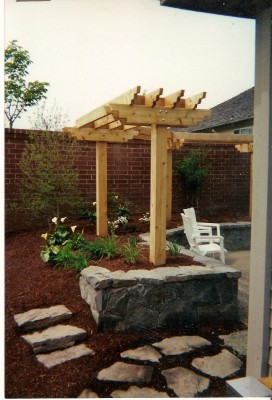 This was an interesting project, also.