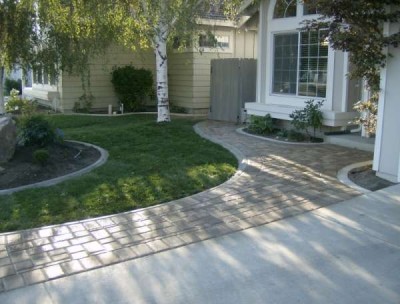 Every project we take on is not some massive and expensive extravaganza. It would be nice, lol, but it sure doesn’t work that way. Obviously, I show them off because I am as human as the next guy. I am proud of them, their complexity and many of their fascinating styles. Add also that the larger projects do offer some pretty astounding diversity, from garden grotto’s to large scale reinventions of entire environments.

But we have done plenty of smaller-budget jobs for what I will term “normal people”, lol. These “normals” keep us in business, the fact is. Projects like those shown here are typically in high-population areas or neighborhoods and everyone gets a look at what transpires. It results in a lot of conversations, at worst, and more work, at best. We get to know plenty of neighbors, friends and visitors of the family’s in the neighborhood and the general style is actually a lot more fun. Lots of people with relevant questions, a chance to go over and help a guy or lady out with some nagging issue of great moment to them but like falling off a log for us, since we do these chores daily. 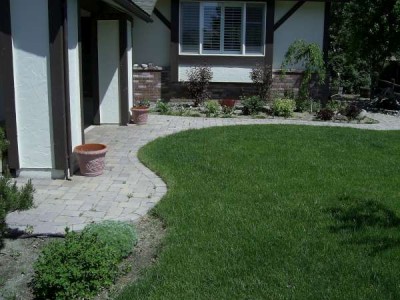 The pictures above are of this ilk. Both wanted to get a bit more curb appeal and some better function out of squared-off cement sidewalks and entryways. Expanding the sidewalks to enter a home produces a more openly inviting ambiance at first glance. It also is extremely functional, especially when moving that piano inside. The next shot is an entry that we did the opposite to, cluttering it up real good, lol. 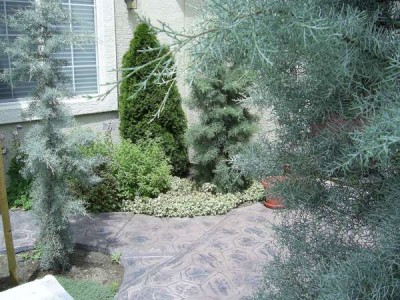 These are smaller but equally-satisfying projects, no matter what the budget. Working with people is still the prime benefit of the entire operation, at least to me. The single greatest motivating statement I ever heard was “Gosh, Steve, we knew it was going to look good, but we never dreamed it would look THAT good.” That’s better than money. Of course, tears are better, but they are rarer, too.;-)

Incidentally. many of the lawns seen here we have referred maintenance issues and especially fertilizing and disease identification to TruGreen with outstanding results. They have proved imminently capable and most reasonable.

2 thoughts on “Landscaping For Smaller Budgets”