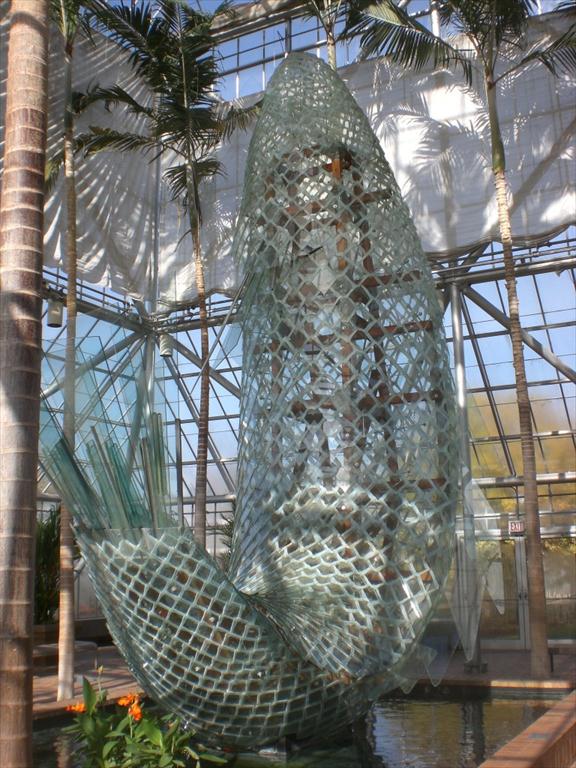 I took a trip to Minneapolis, courtesy of Jane Sparks Flanders, a very good friend of mine who dates (back then, pretty much literally) from my 8th grade class at Southern Junior High in Owensboro, Kentucky. And truly, we have actually hooked up more recently – when I first went “viral”. When I got online at first, good old modest me sent out a sort of form letter to all the people I could think of who had undoubtedly lost track of me and announced I was alive and once again fair game. Well, I got a response from Jane who I had not seen nor heard of or from for over 30 years, who announces she attends Burning Man with regularity and would be in Reno in just a few short months. I ended up going to the event – thus the Burning Man posts in here – and we had a ball together. Since then, we’ve stayed in touch a lot closer. 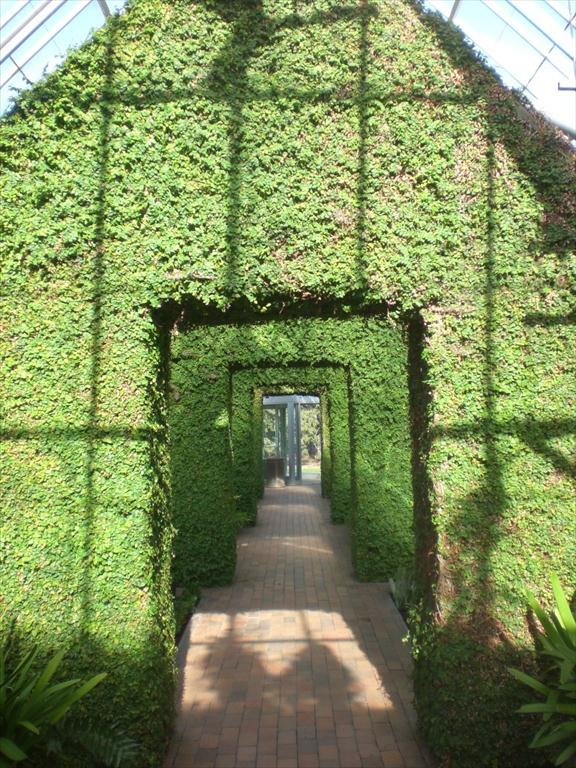 Straight from the plane, we toured this gorgeous city. Minneapolis is full of surprises – from man made and obsessively artificial and unconventional, to just overwhelmingly, splendidly Natural. (Hey, it really does have a bazillion lakes. They miscounted.)  😉  After breakfast at a dynamite Cuban Restaurant, Jane and I took the car tour and did some good clomping around to boot. Here’s some daggone extreme artificial edifices, along the line of that glass fish at the top which can be found in the Sculpture Garden. Just like the next pic – a somewhat well-known sculpture which made me glad we’d eaten before viewing: 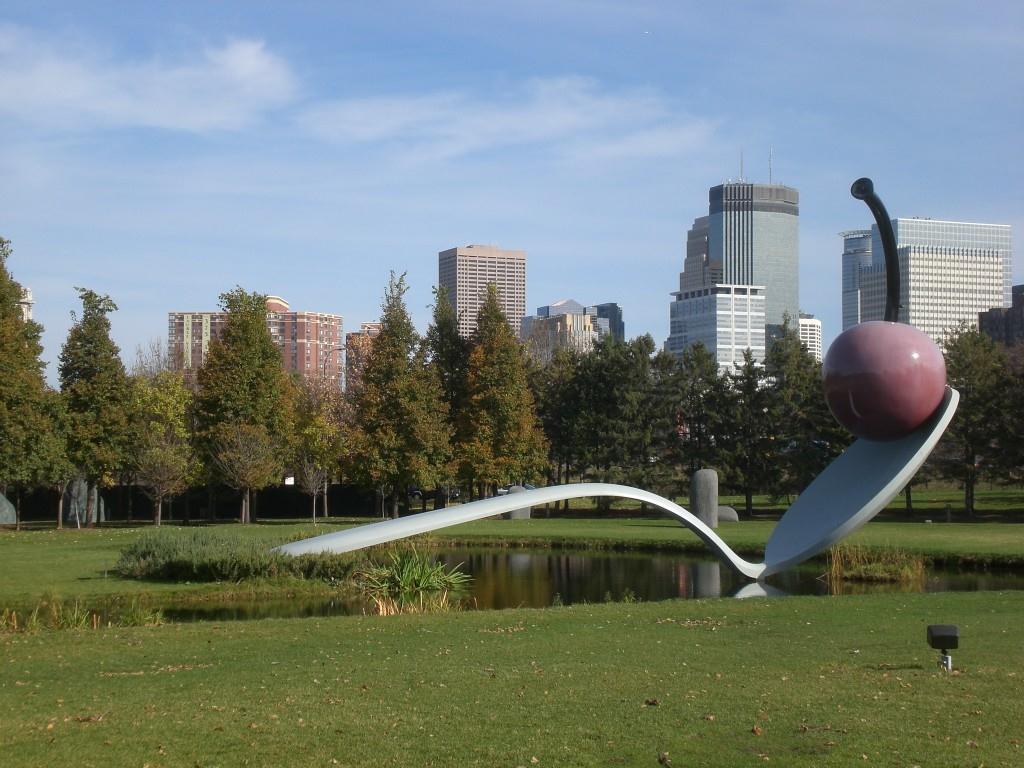 Below, composed of interwoven willow branches and installed by a traveling artist who specializes in exactly this sort of sculpture – with many far more “Outside the Envelope” than this one (after all, this is “just a house”) – Patrick Dougherty’s works are passionate and evocative as heck. This one, of course, if Plu-Perfect for Halloween. 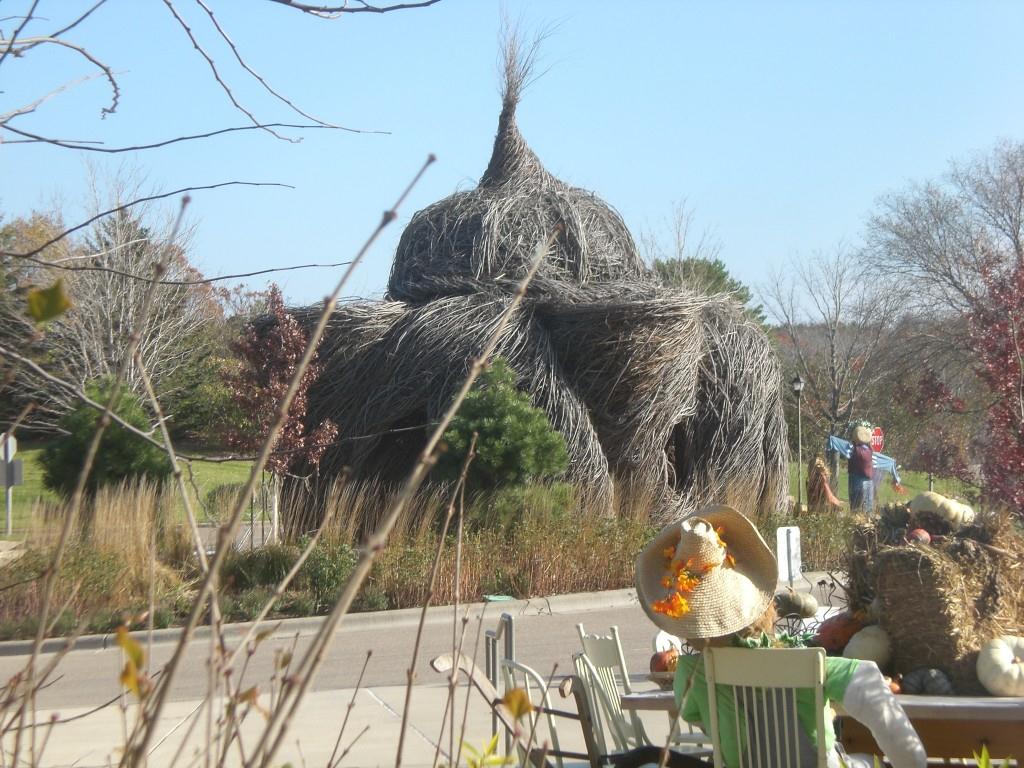 From the ridiculous to the sublime – or is that backwards in this context? –  we find Frank Geary’s most unusual house perched out over the river hard by this bridge – incredibly enough it is getting itelf expanded, thus the crane. For pure Stainless Steel comfort, this is it! Pretty crazy: 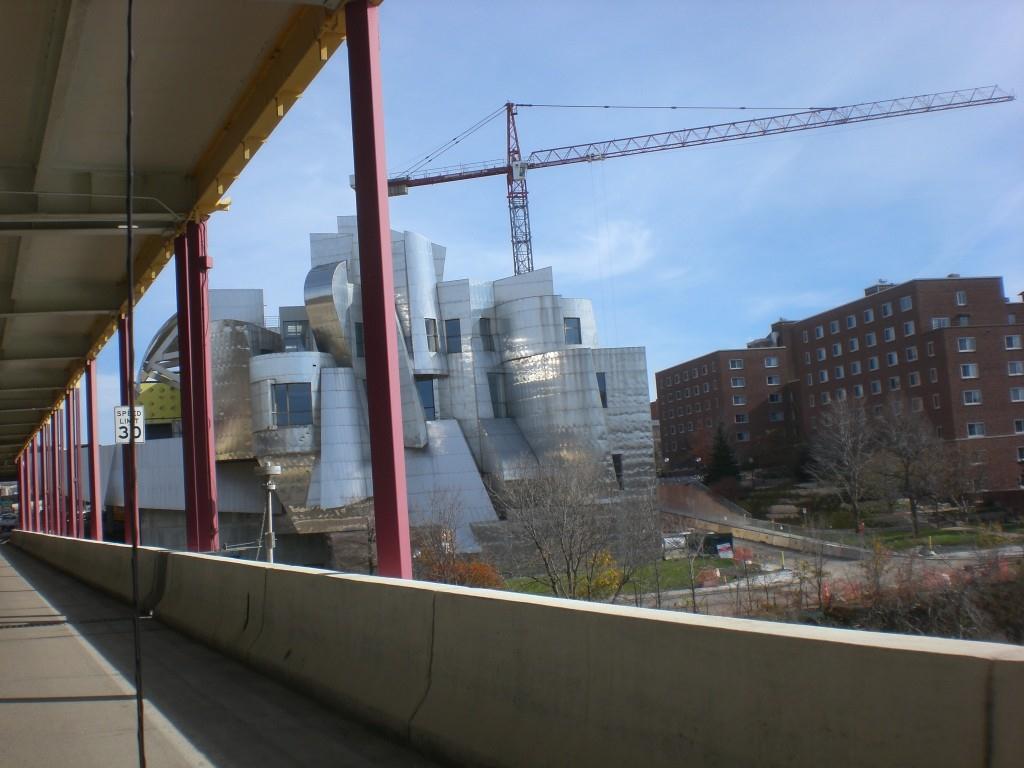 And, compared to the Guthrie Theater below, Geary’s house might be ‘near-normal’: 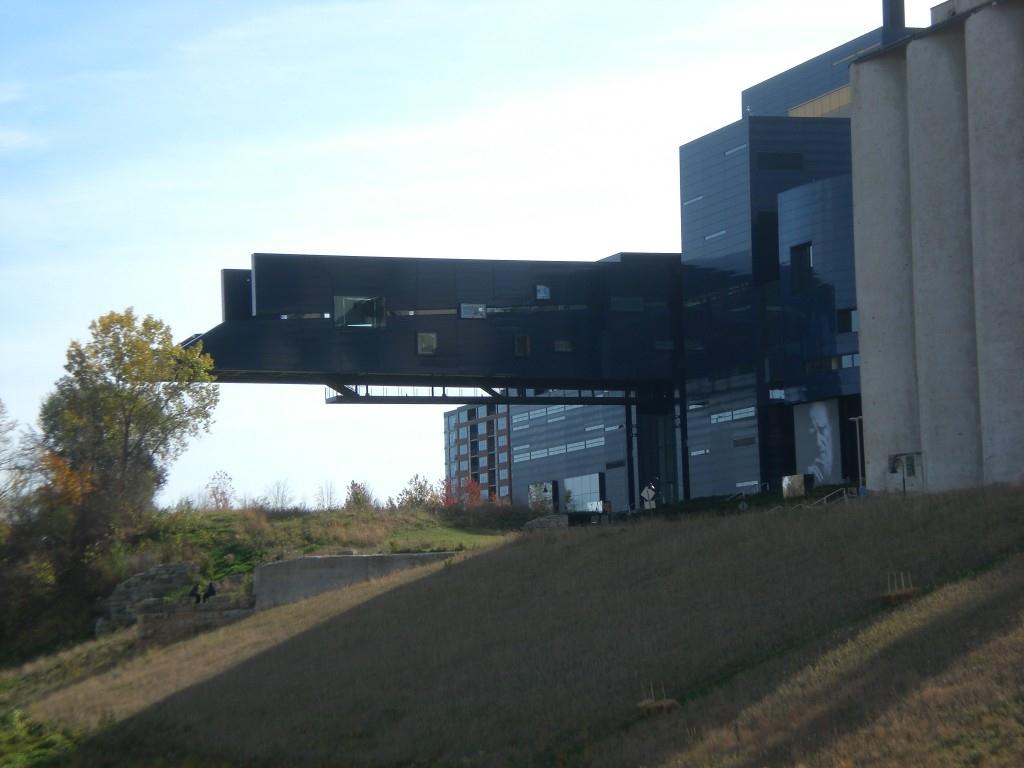 Minneapolis reminded me so much of Vancouver, BC, owing to its obvious love of natural things combined with an absolutely craven regard and respect for artistic license in architecture. Knowing what I know now concerning the Minneapolis regard for live drama, art in general and a sense of “what’s next?” – it all begins to make sense.

Their love of Nature is probably just a battle to deal with such an overwhelming natural presence, considering cold Winters and the absurd abundance of lakes, rivers, creeks and ponds.

Jane proved to be a natural “birder”. I absolutely couldn’t believe how she spotted this Bald Eagle, shown here being badgered by a few really obnoxious crows for the crow definition of ‘sport’. Crows really are jerks and here they prove it yet again. 🙂  But enlarge this picture – the eagle is pretty much smack in the middle of the frame. Jane saw this guy from about a half mile away, lol. “What is that?” became a familiar refrain as we toured in Nature Forests in and around Minneapolis, always followed by whimsical directional driving to see exactly what the heck “that” was. This one worked out nicely. 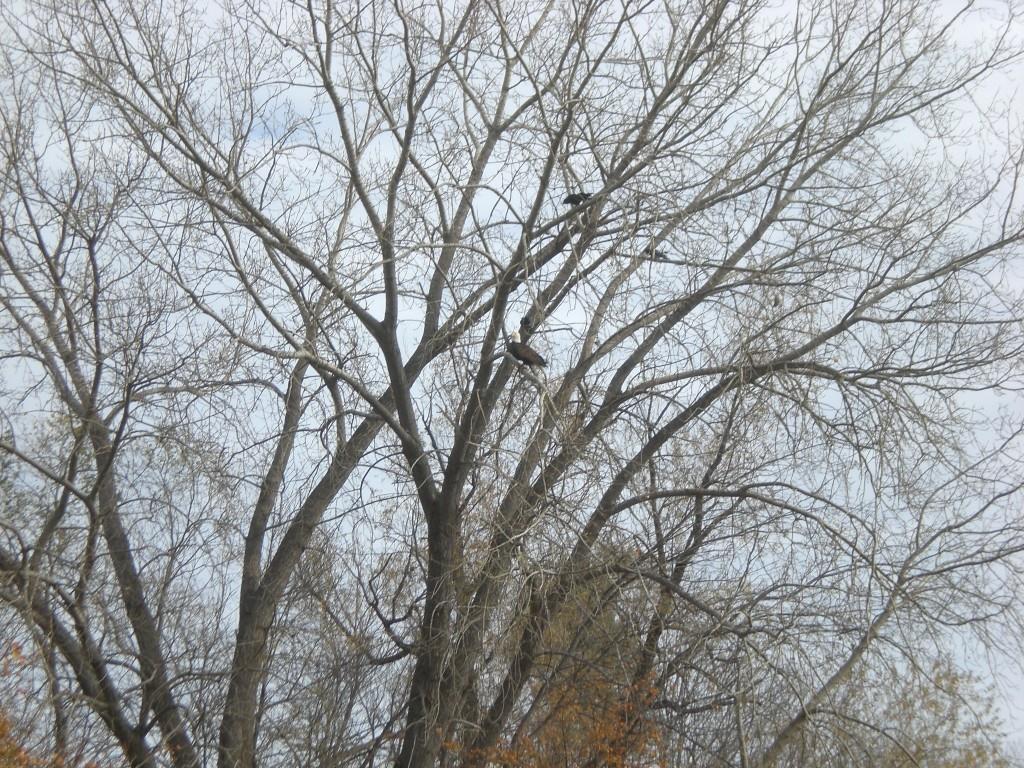 We drove to Minnehaha (don’t laugh)……old, bad joke…….. Park, a wonderful park dead center in the city with this absolutely stunning waterfall which I certainly never expected: 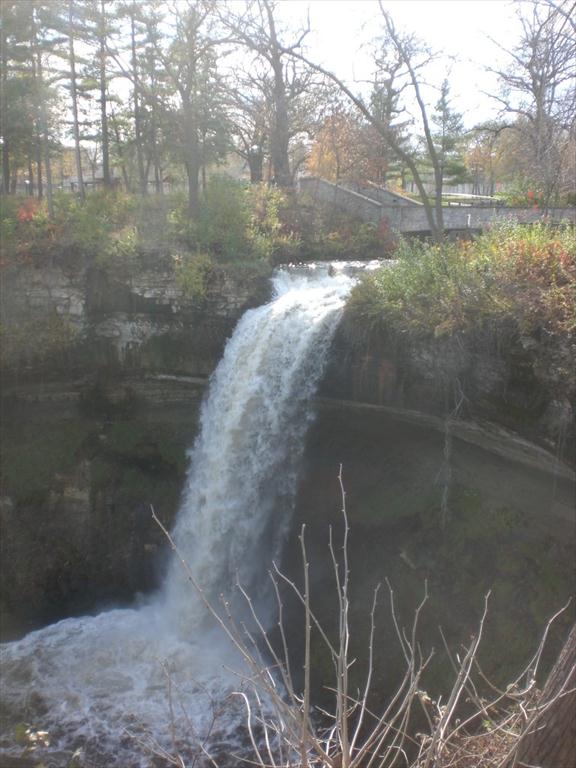 Jane lives in very nice condo project -she has recently just relocated there – in a suburb on the West side of town. It’s not really dense with population and, (judging by the gutter cleaning she forced me into abject slavery to deliver for her) one does indeed “own” one’s own joint. In fact, one of the ostensible “purposes” of the visit  was to ascertain whether or not we could devise to construct a Zen Garden for her with the resources (limited space) at hand.

I’m thinking I finally get to do a major pebble mosaic pattern with a very-Steve-like bit of jack-hammering and destruction (hey, I get to have fun too!). My 3 favorite things! Destruction, noise and art. Hell, it doesn’t get any better. Oh – plus, I told her I work for beer. Man, I have her right where I want her!

This is just too easy, man. Am I smart or what?

Here’s her view out back – think Walden Pond and, yes, that is a small bridge in the distance. Now and then you’ll spot a fisherman on that little strait looking utterly like some Norman Rockwell scene: 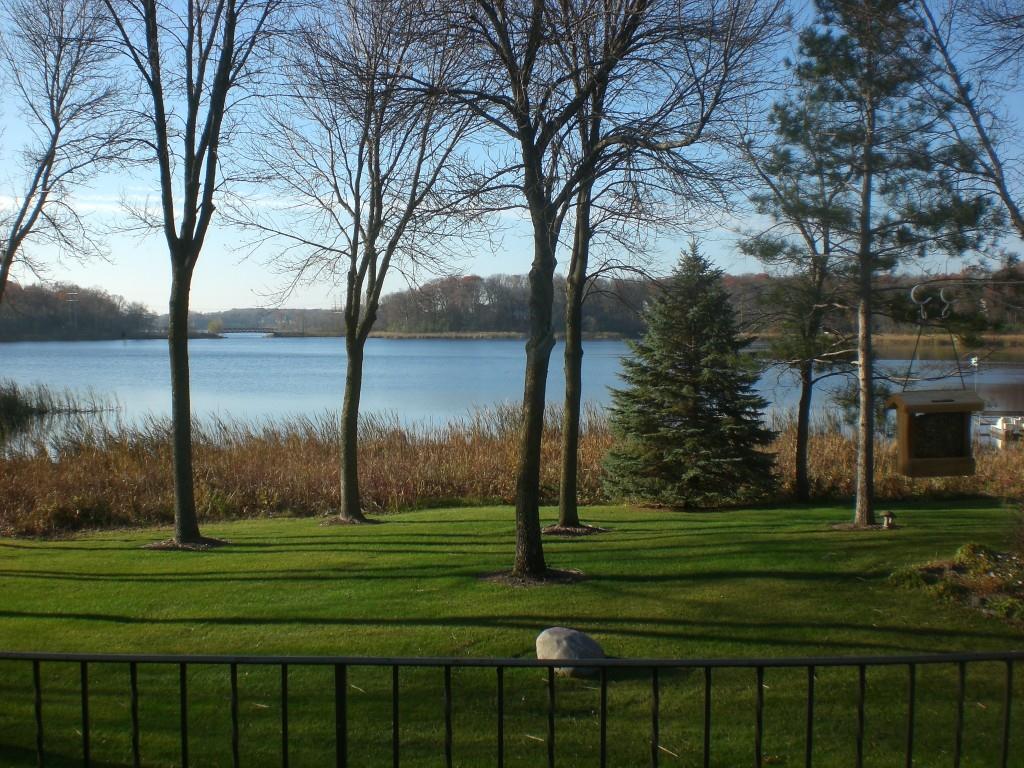 Jane Sparks Flanders is one of my favorite and most interesting people in the world. Modest to a fault, this highly successful and soft-hearted businesswoman has her own very hard-won Insurance Business dealing with horses, pushy and fun people of all stripes and who has some exceptionally close and fascinating friends. She has this “Montana Crowd”, I call them, where she has a virtual second home, around Missoula who think of her as I do. That would be her Burning Man crew.

Hey Abe!  “No sweat!” (an overheard ‘mantra’ of he and his old high school chums)

I badly want to tell more, but even she will probably be bored by this time. In the end, this was a delightful trip, offered right out of the blue and put together in literal days which in some ways made it even more special. As people in general, we are far too UN– impulsive when it would be so cathartic to be just that. We both drank deep of this deeper longing we all have to experience just a bit more of life. To paraphrase John Lennon: We passed that audition.

3 thoughts on “To My Good Friend Jane, Minneapolis And To Friendship In General”