One thinks of a desert in such negative terms, generally. Of course, so many of us were raised watching terrific Disney films involving desert life that it took a bit of pain out of the notion, notwithstanding the nastiness of the snakes, Gila Monsters and Tarantula’s, lol. Pictures of “Sidewinders” have dominated my snake dreams for decades. 😉 Yet, aside from embracing the horrors, there is, in fact, tremendous beauty in a desert. 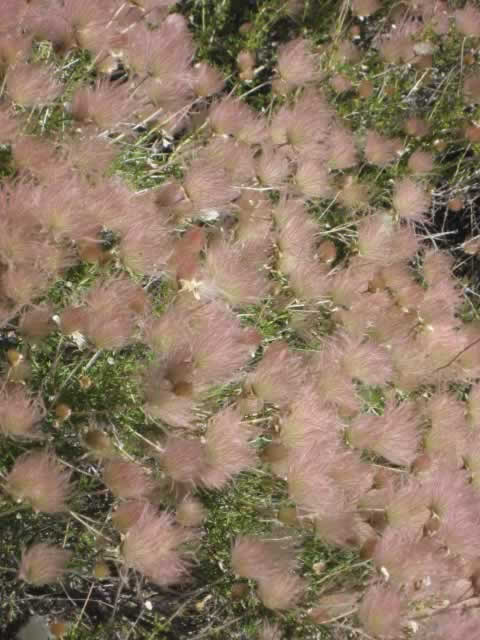 There is more than one “desert”, in fact. Indeed, it’s just like the fact that there is more than one “forest”. My personal experience with desert life was two-fold, both, however, involving Northern Nevada and the “High Desert”. The Great Basin experience involves a desert which is around 4,500 feet above sea level. The air is lighter, the skies are absolutely immense and clear. I remember sitting out on my porch just outside of Reno and watching satellites go by in the night sky. The Milky Way was resplendent, making nighttime a gorgeous feast of stellar delights. Needless to say, a telescope was a secret passage to things I had never seen before.

But on the ground is where I work. One of my desert incarnations was working as a counselor/’coach’ for a judicial facility for young guys – JD’s, one and all. We got young miscreants from Oakland, LA, even Seattle and Houston, Texas. My job dealt with the “Boot Camp” at Rite Of Passage, a spot set (intentionally!) solidly in the real desert, as the kids are told, “20 miles from the nearest tree”. 😉  It was out there, watching kids run one of the 2 3 mile runs they ran each day, where I really got close to the plant life. It was phenomenal in microcosm and even more so after a rain or during Spring. One could have plucked blooms of a thousand colors – Indigo, Indian Paintbrush, small Yarrows and Vetches, Desert Primoses, Apache Plume as in the photo above – it was stunning in its profuseness. And, of course, this does not include the fragrant and actually quite beautiful Rabbit Brushes, Sages and Desert Peach which are each 100 year old plants, doing what they do best. 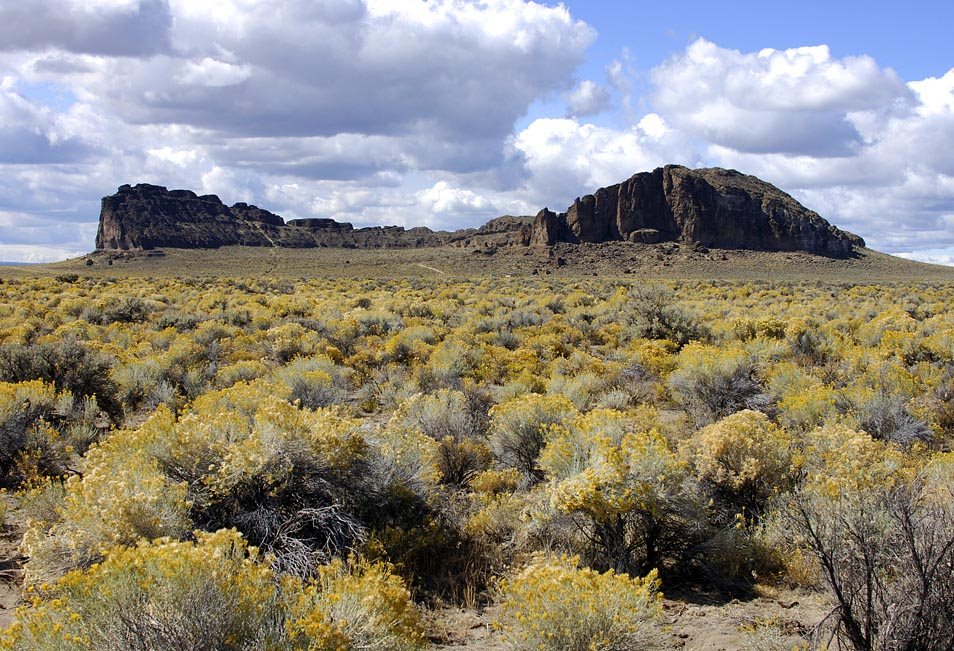 The implications of all this can be wildly presented in the designs of landscapes in the region. Typically, of course, this deals with homes and commercial developments which, by their very nature take place in more urban environments. But make no mistake – the desert itself can be uncommonly pretty and amazingly – stunningly – fragrant. Each rainfall presents a massive outpouring of sage aroma, permeating the air like something all-encompassing and suggesting a sensuality which you just live in and absorb like ions. It makes for the most heavenly walks. 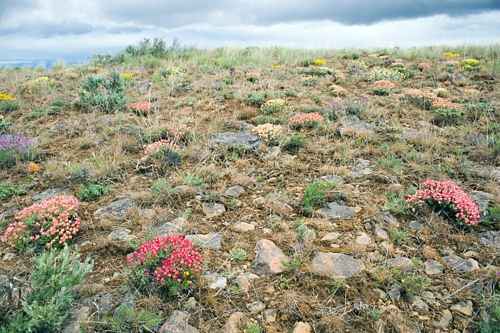 My landscaping attempted to use as many natives as I could stuff in, with a huge emphasis on perennials and, in particular, Gaura and Penstemon. Yes, I added some totally “English Model” plantings, as we see from the Berberis and Variegated Dogwood shrubs, below, but I went ‘perennial-loco’ and never regretted it for a moment. 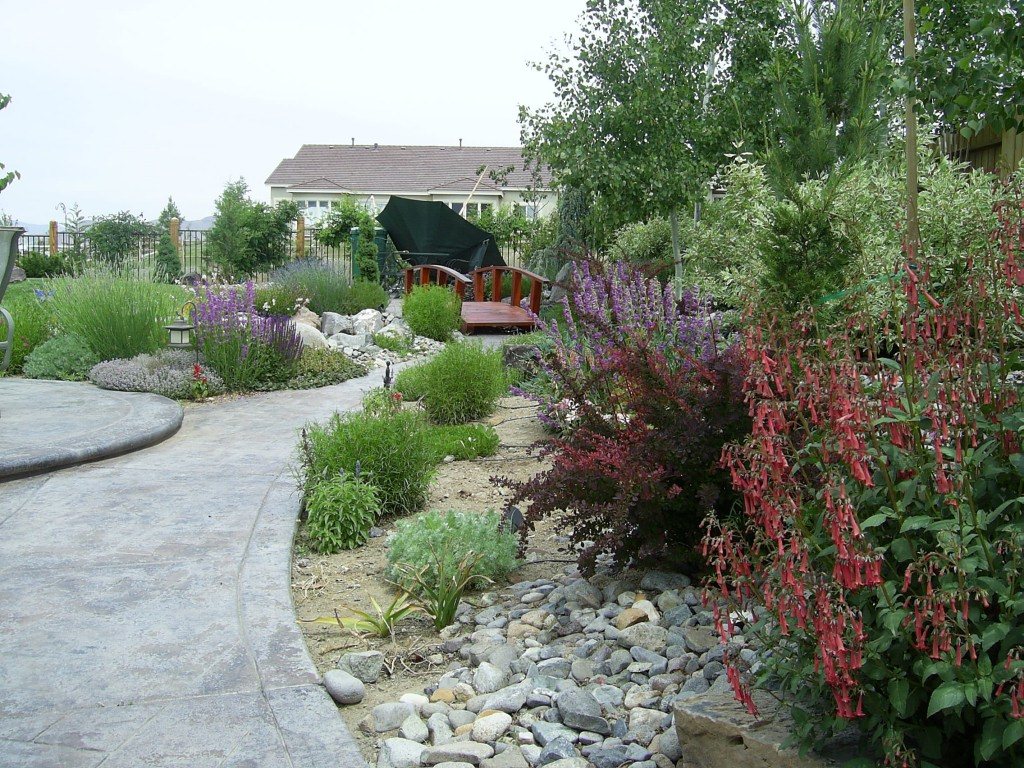 I mean, I have the benefit of an ample water supply by virtue of drip irrigation systems, which locate and deliver the water to the roots themselves. This is quite a technological advance, by the way and it has revolutionized landscaping in the High Desert, to say nothing of other, more hostile desert climates such as those further South.

Th irrigation supplying this project is completely underground, as an example: 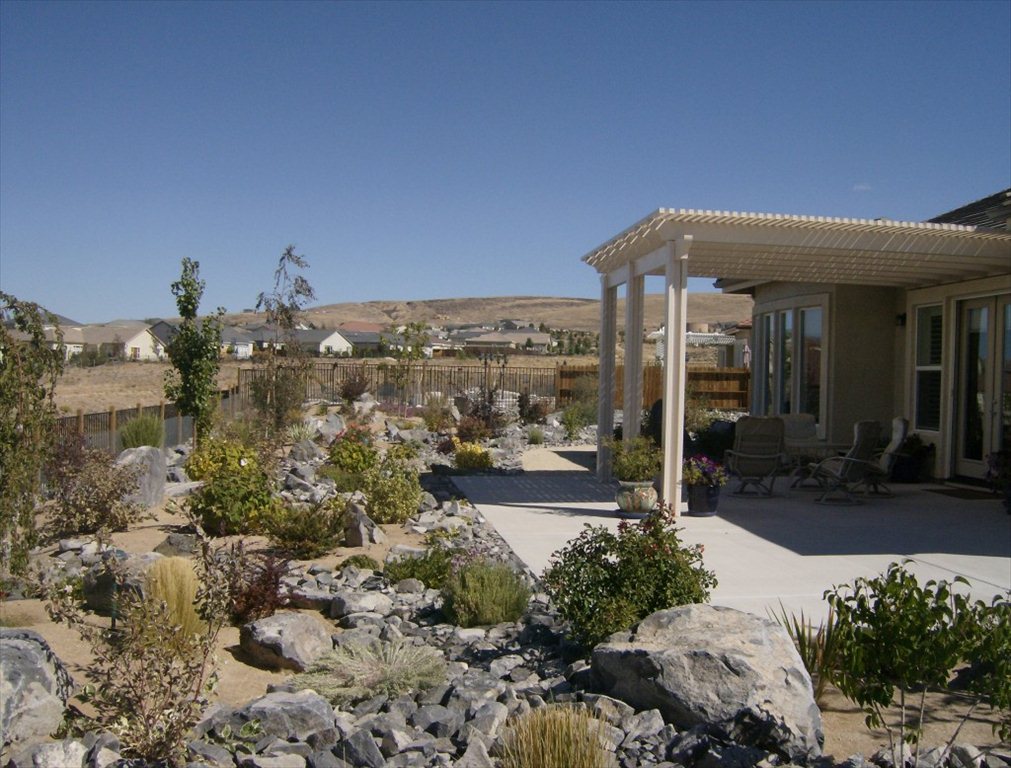 Without drip irrigation what would be an amazing evaporation rate if delivered from above can get the water to where it’s needed – and in timed deliveries. There are the evaporation issues stemming from wind as well –  with an ever-present wind – another feature of at least Reno, with it’s ‘Washoe Zephyr’ so predictable at noon each day for 3-4 months a year. Caused by the desert heat sucking the air away from the snow-capped peaks of the Sierra’s, this wind flow is completely predictable and an amazing pain in the butt for landscapers and dirt workers on road or starting projects. It’s the “dust thing” ya know. Complete with dust devils, lol, small tornadoes which are actually no laughing matter. 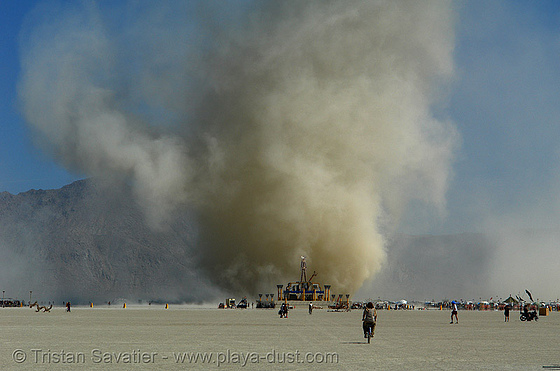 Burning Man supplies ample of these every Labor Day, as this picture suggests.

But the landscaping enterprise itself offers the one thing which other climates simply cannot – Sunshine. Lots and lots and lots of Sunshine. If one treats the soil good and follows the script, the chances for perennials to become an overwhelming part of any Reno Landscape are humongous good. And the native perennials?  Wow! 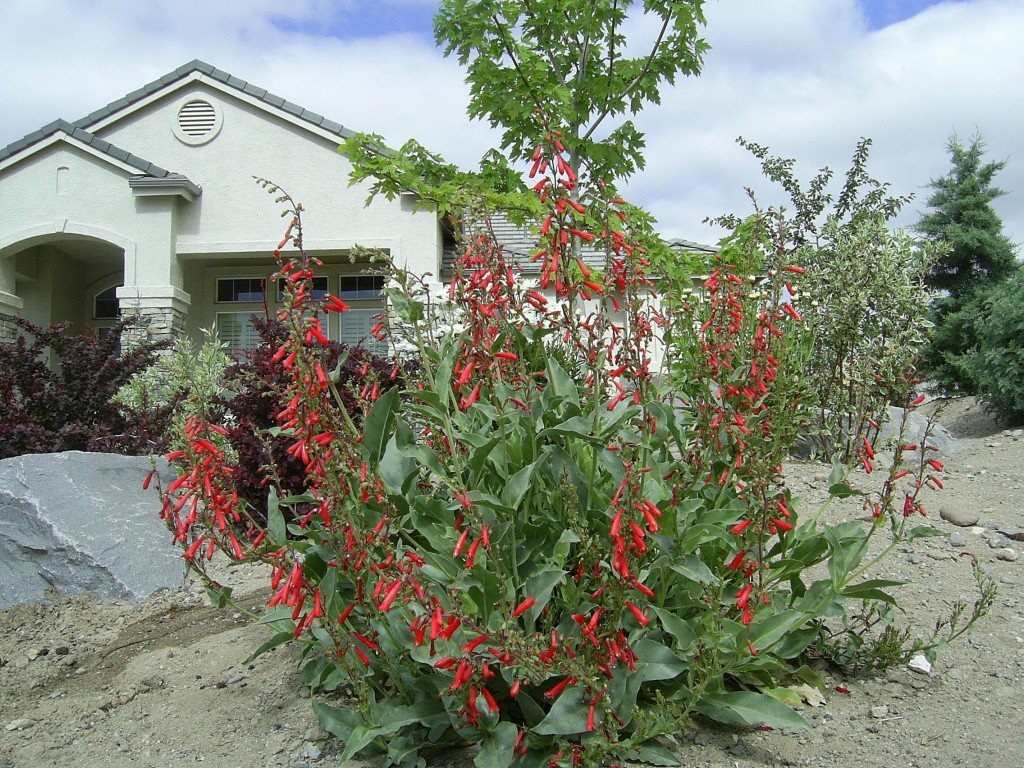 The Penstemon above and these Evening Primroses below give an idea of what is possible. 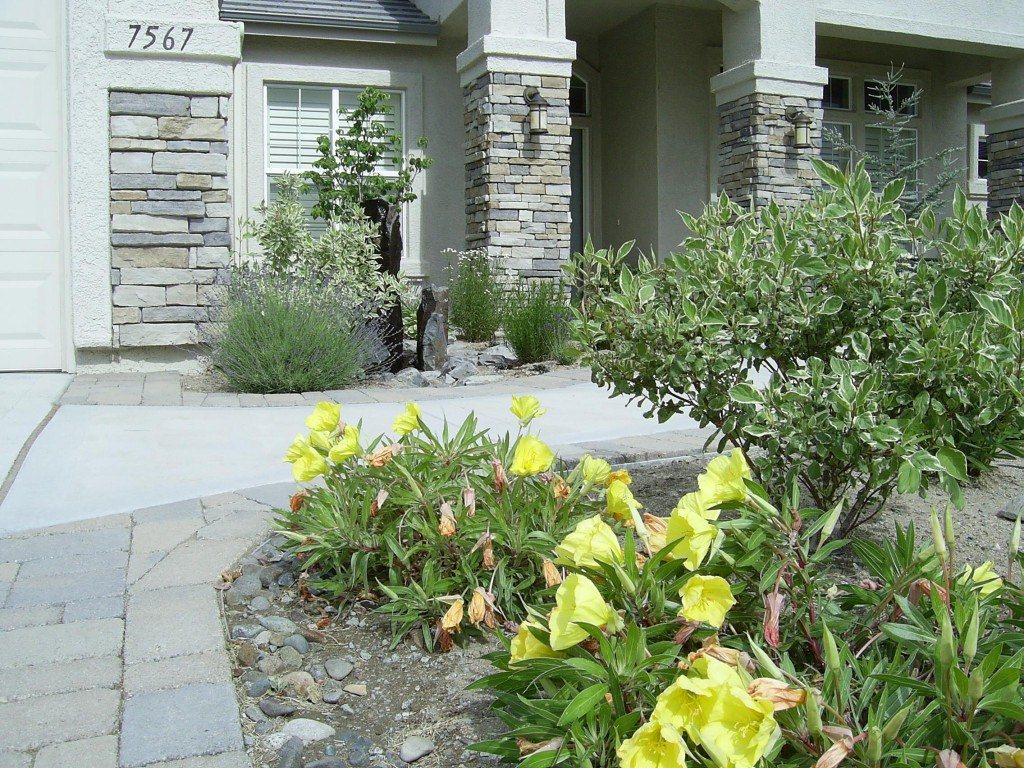 The wonders of High desert Landscaping are wide and wonderful. I’ll continue with more on this fascinating corner of landscaping next.

4 thoughts on “The Ironies Of Desert Landscaping -Part 1”