In a parallel Universe, I once wrote a blog for a local Louisville company: Pond And Fountain World. (link included). In so doing, it has allowed me to study and roam around, looking at an absolutely fascinating subject. Not only does the blog feature what they sell – currently-retailed pond and fountain accouterments, including an excellent selection of pre-made fountains, ready to deliver and install – but it also gives me the right and reason to explore the entirety of the world of fountains, internationally.

Wow! What a treat. Below from The University of Connecticut’s Waterbury Campus: 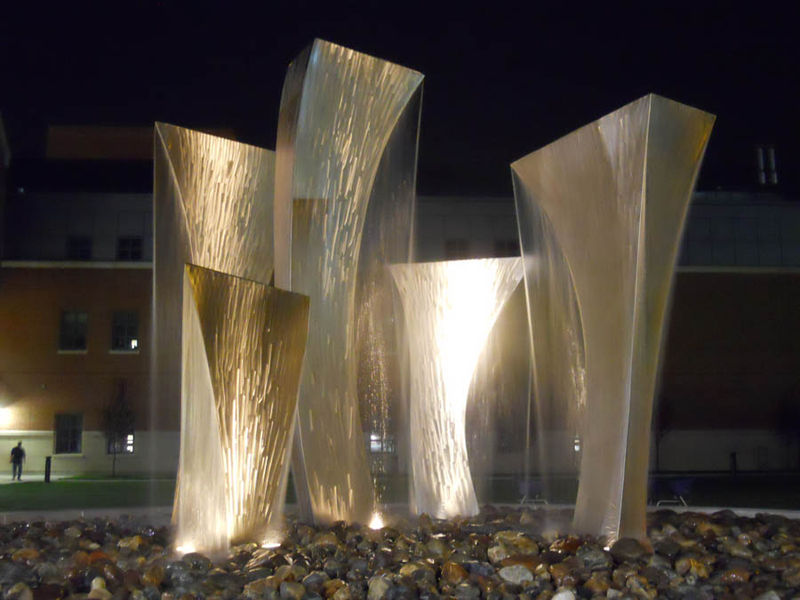 The designs of those who build these things come from a creativity one can only guess at in its artistic purity, apparent freedom and in their sometimes overal simple immensity. “Mind-boggling” comes to mind as we tour the most outlandish and absolutely breath-taking water-art sculptures, sitting as so many do in the public squares of our major cities. From the work of Lawrence Halprin in Portland, Oregon – 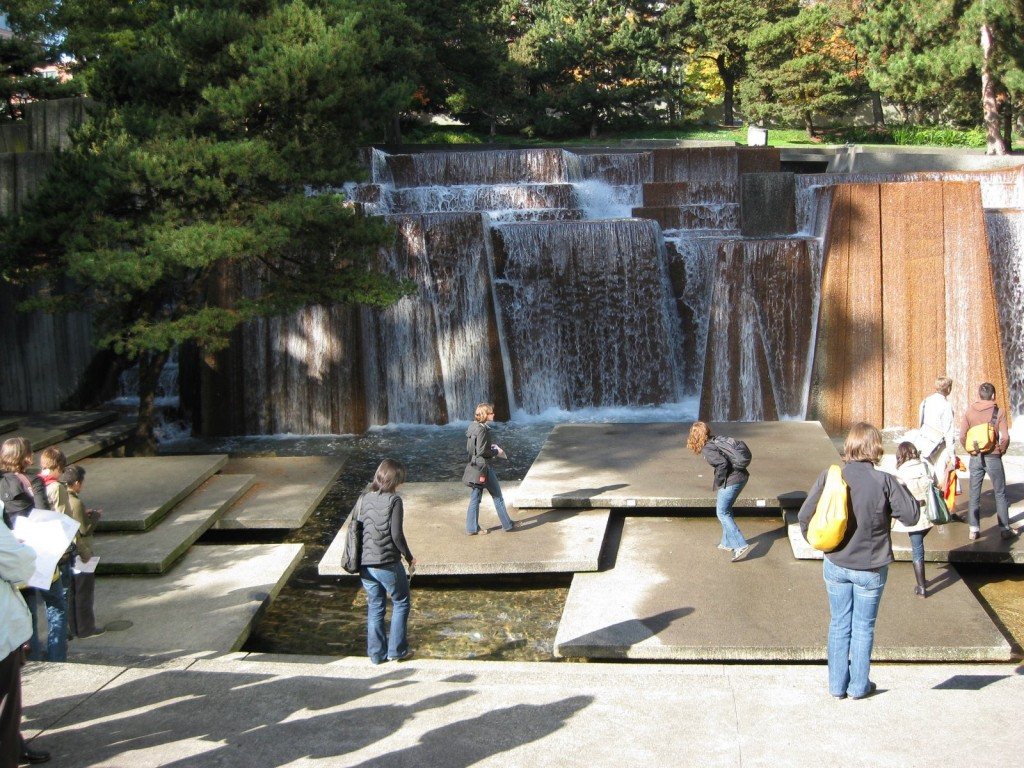 My great good friend, Steve, gets to sit at the bottom of Halprin’s Ira Keller Fountain in the face of the seeming vastness of the fountain while it crashes down, so nearby: 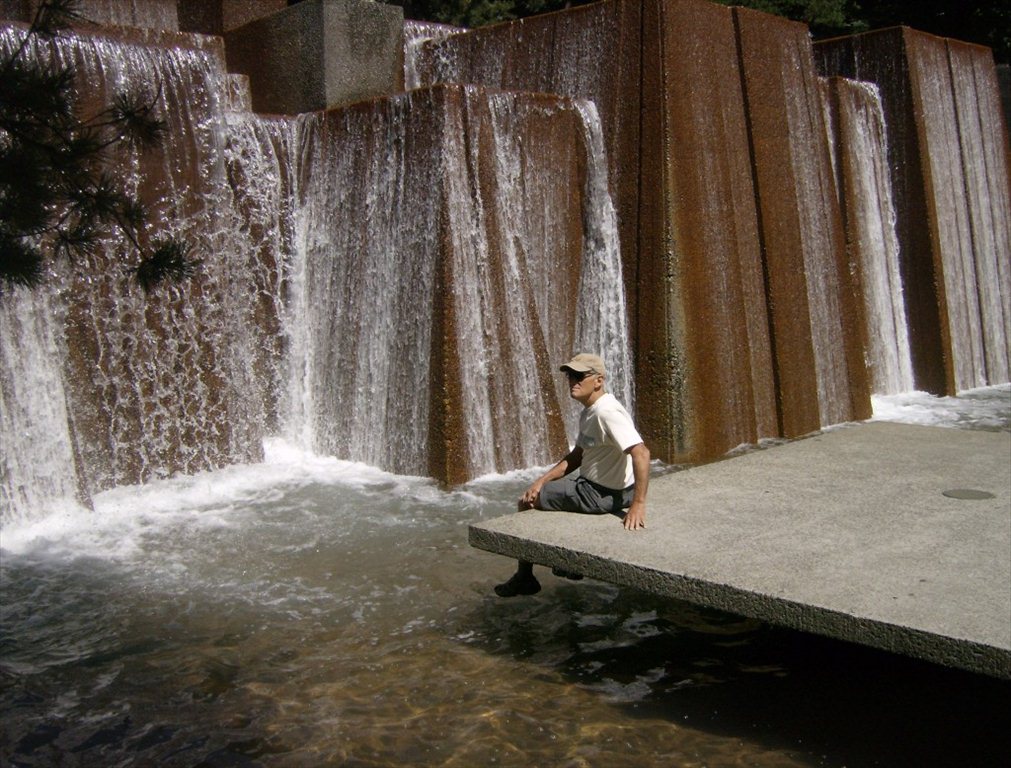 These gorgeous civic fountains are now becoming less formal and more amenable to “audience participation” these days – a welcome respite from an overly-litigious society in general, which I welcome wholeheartedly: 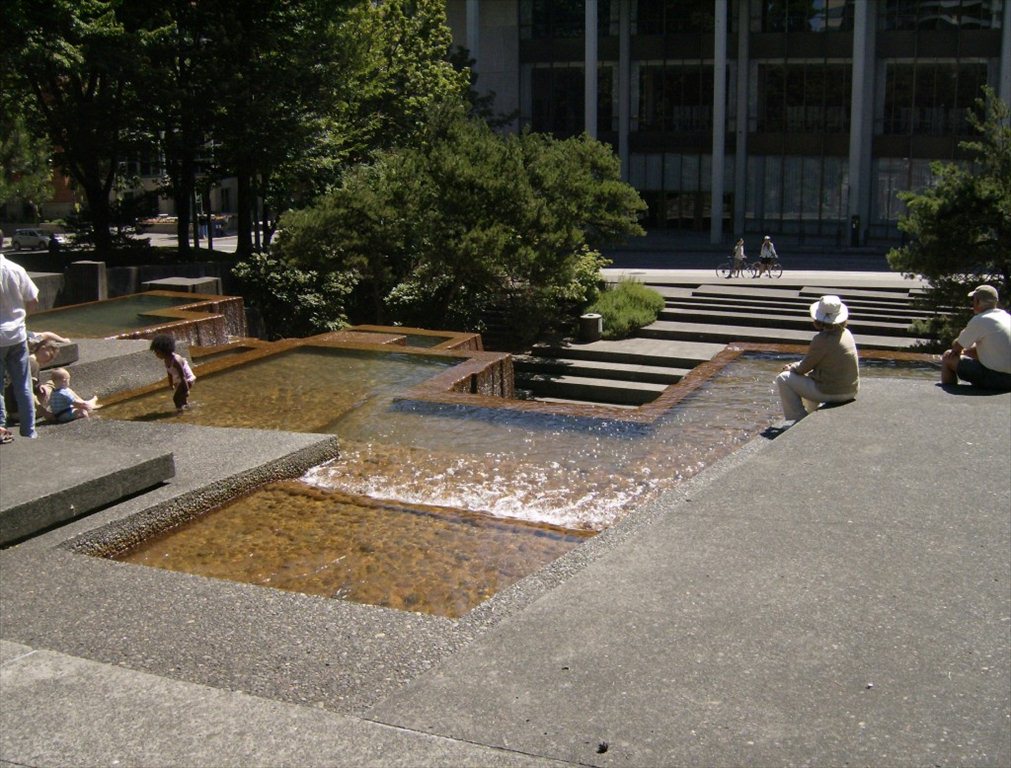 Here is Halprin’s stunning blend of  “The Natural” and “The Modern” work at the FDR Memorial in Washington, DC, shown here at night – 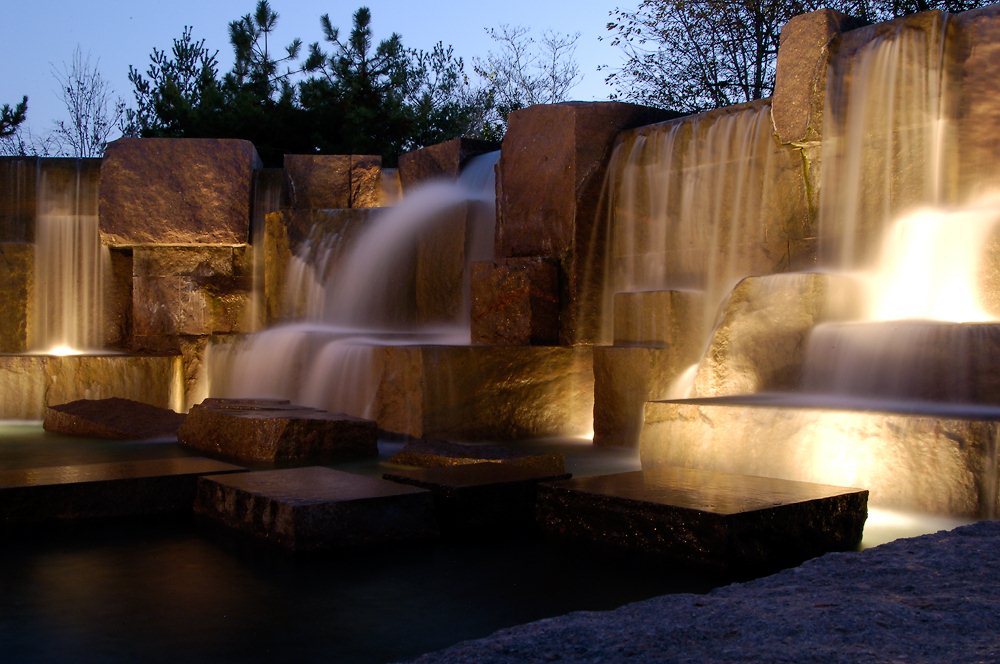 Fountains were initially creations which were fed from aqueducts – the original plumbing apparatus, dating back at least 2,500 years. Often, these aqueducts would send water downwards, creating the pressure which allowed the newly-minted fountains in Greece, for initial historical example, to spurt water out for public and private consumption. Fountains and public water sources, fed by the rivers, lakes and streams in the mountains, began appearing around 260 BC in Ancient Greece. The notion of “siphoning” became pioneered and created works which could allow water to run or not run, depending on opening and closing a valve.

In the end, aqueducts would literally terminate in city centers or plaza’s where the resulting pressure and large quantities of water supplied could be more fully appreciated by attaching art work and form to the terminus.

The Trevi Fountain, in fact, Rome’s famous “Fountain Of Love” featured by Hollywood so many times, was just this sort of product. 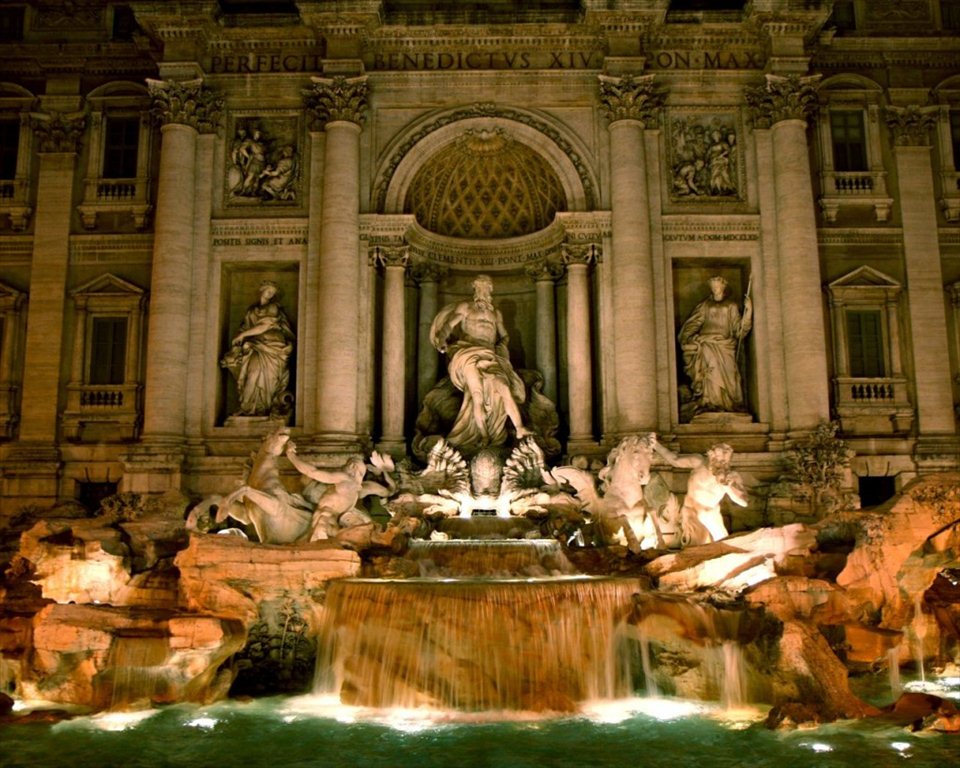 (Picture credit here to Tour Of Rome, along with the quote below, capsulizing better than I could, a brief history of its construction.)

“There had been a source of water at this site for over a thousand years, although it was not until 1485 that Pope Nicholas V commissioned Gianlorenzo Bernini to create the fountain, but the project had to be abandoned when Pope Urban VIII died in 1644. Then in 1732, Niccolò Salvi was employed by Pope Clement XII to continue with the work, with the result being the Baroque masterpiece that completely dominates the little square today.” 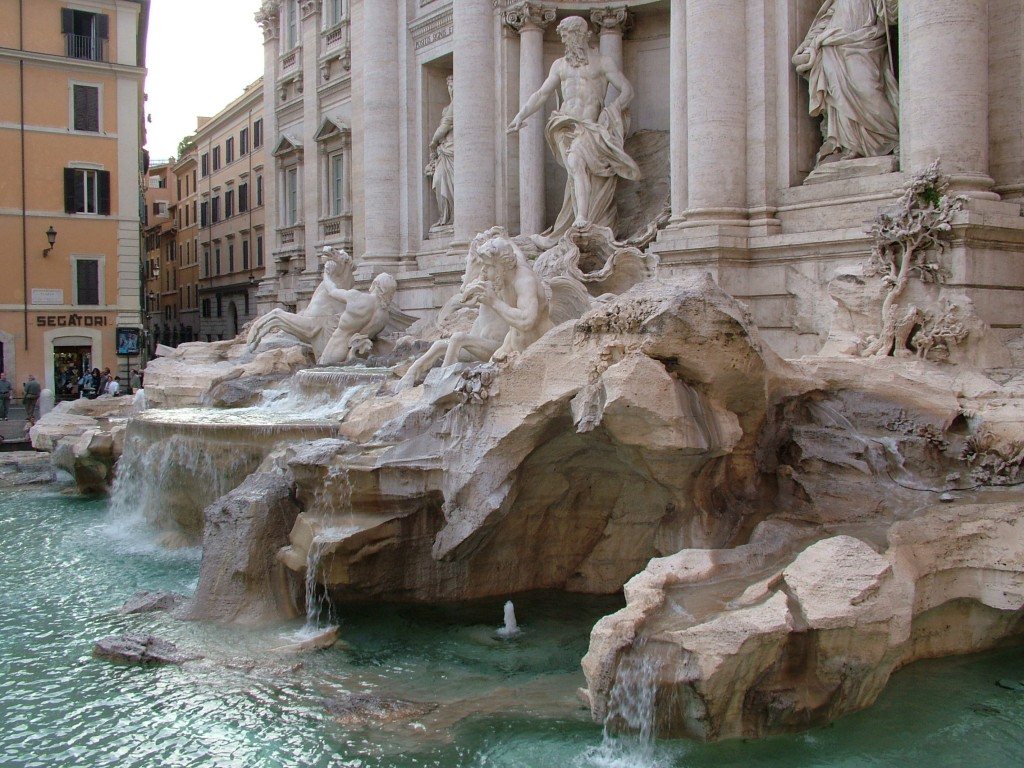 For me, it is the mixture of “chthonic” elements – fit for the Gods alone – which assemble in the primordial primitive juxtaposition of the  jagged rocks which also seem  to be emitted by and to be so “at one” with the building behind. Like our own consciousness, we see a remarkable blend of the absolutely most Elemental mixed with the modern human and more mundane elements of muscle, posture and expressions. A fountain like this hits our perceptions in mental regions usually reserved for art. But then, who said fountains are not art?

Another personality who found the Lunatic Fringe of Modern Fountains is a Japanese designer named Isamu Noguchi. Below is his what is arguably his most famous work – his famous “Nine Floating Fountains”, constructed for the Osaka World’s Fair in 1970.

Here it is in daylight, obviously on a windy day – 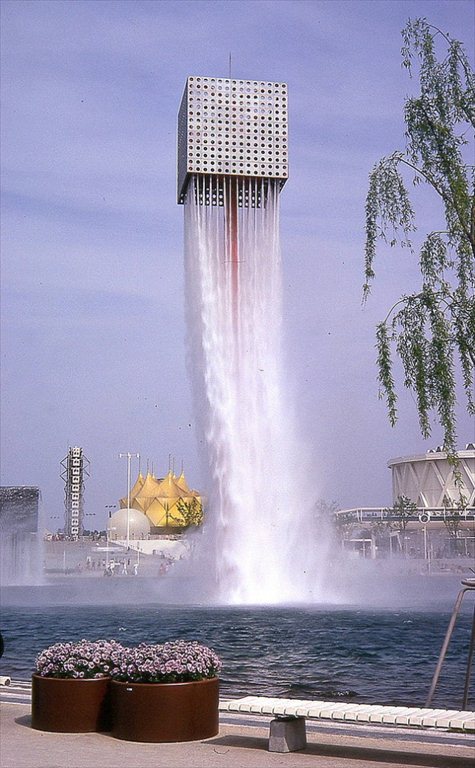 And below is the night-time look for which it has become so famous: 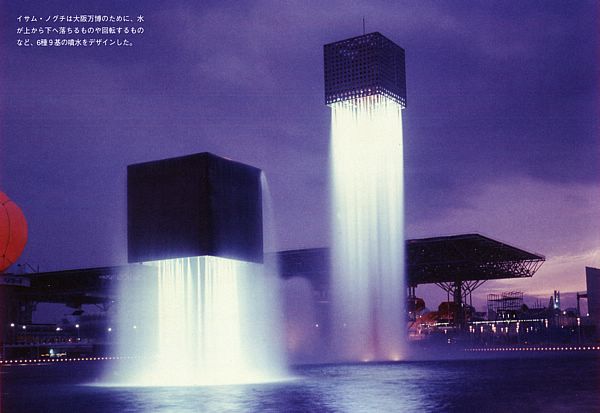 But Mr. Noguchi was not done. He obviously loved the impractical and the utterly whimsical – and he was a master at it: 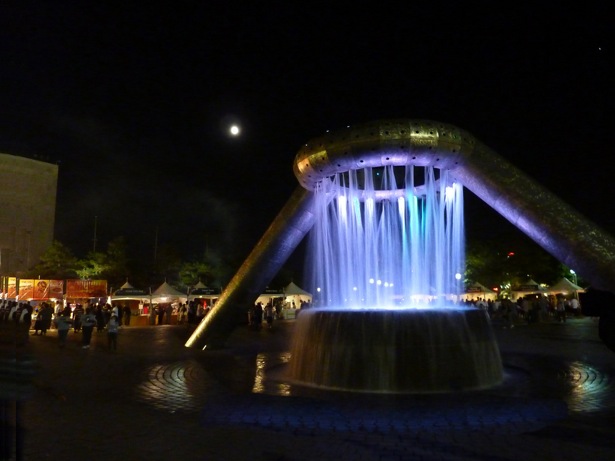 He also had a definite sense of humor! 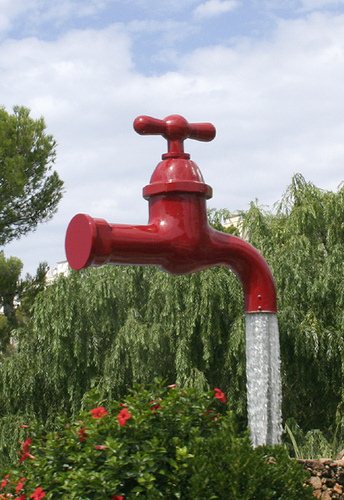 We owe debts of gratitude on an unimaginable scale to the artists who have taken our technologies and our appreciation for Water Art to absolutely absurd but-always-interesting lengths.

Some of them have driven cities and countries to drink! Take Mr. Vaillancourt’s concrete irritation to the city of San Fransisco’s more “proper” sensibilities as an example. “Please”, many said, “take it!”. 😉 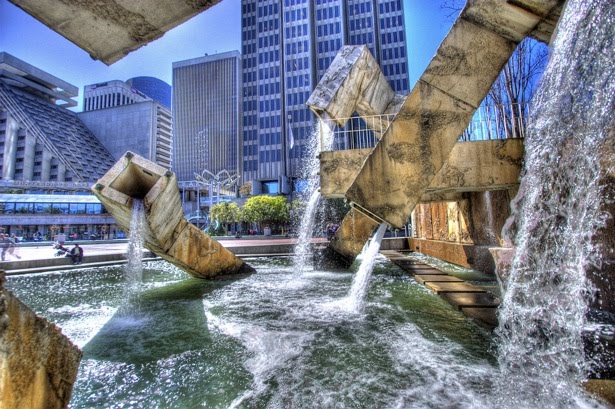 Some folks just need a sense of humor!

Can’t we all be friends? 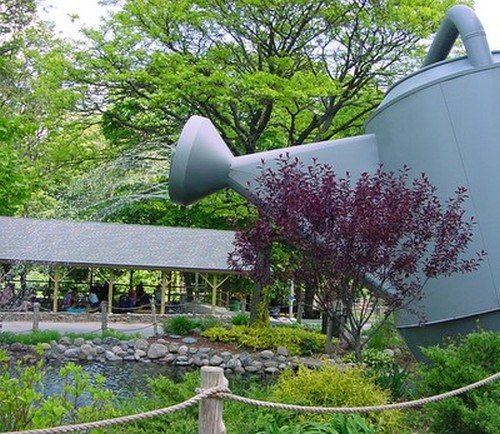 Fountains are very nearly a “First Love” for me. It would not take much to get me all the way there, either. 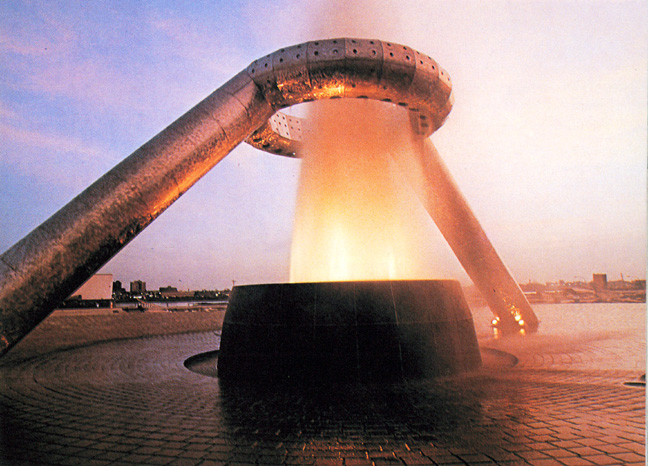 Can I get some Love for the Paris Stravinsky Fountain??? 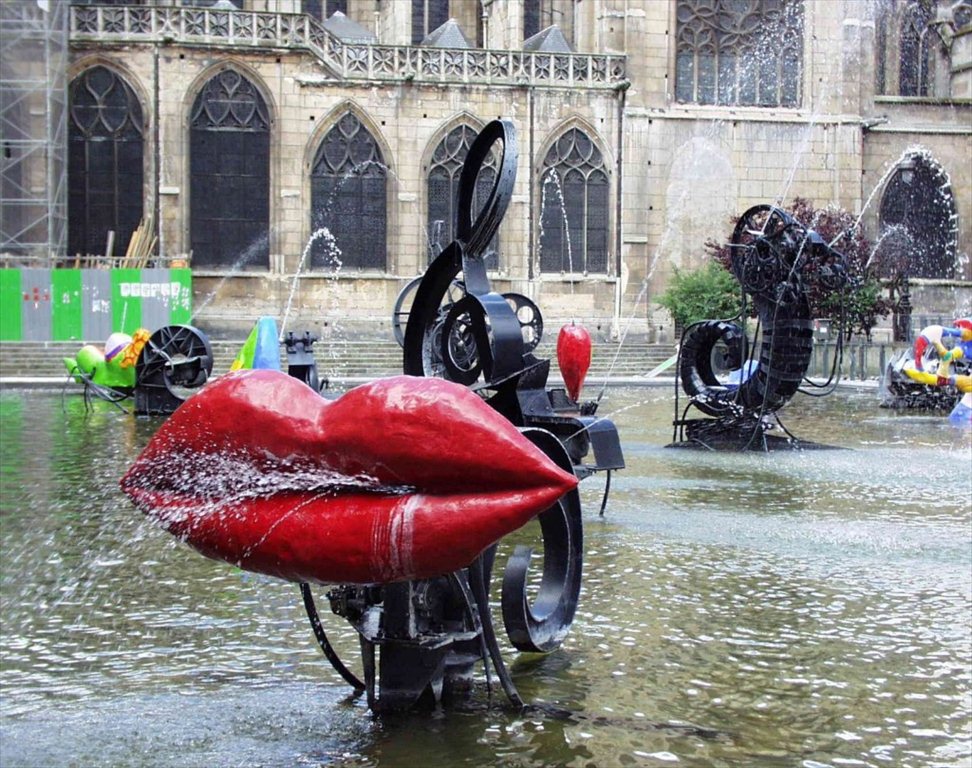 14 thoughts on “The World’s Fountains”