Who cares if fountains only serve water?

Actually, some do better than water. Check out this fountain and guess what material the Bellagio Casino is featuring……….. 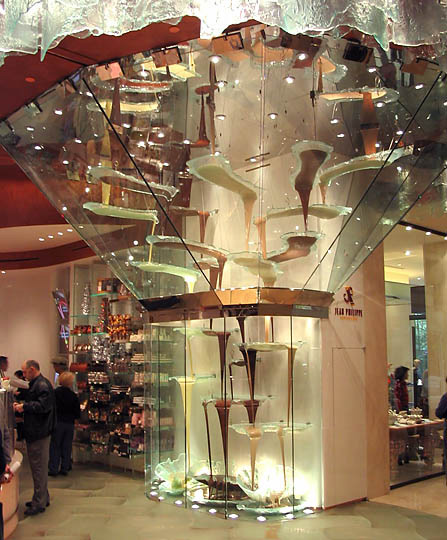 Yes, that would be four different varieties of……..Chocolate. 😉

What a Hijack! I admit I tried breaking in but was caught, handcuffed and led to the Pay Section where they only had 450 different chocolate items. They mentioned the scores of Choco-holics who gathered around this fountain and that my behavior was not the slightest bit unusual. They have a Drool Patrol who are often called in for clean-up purposes.

So where were we? Oh – sure! Lawns.  No?  Oh, fountains again? OK, just to say we did, here’s an unusual one, found right smack in the middle of Chicago: 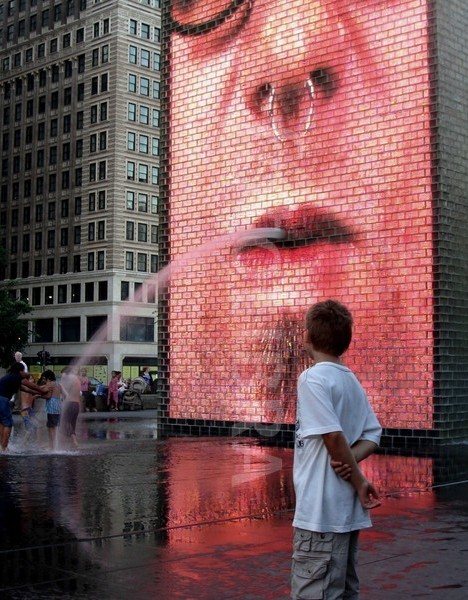 Spanish artist Jaume Plensa designed the Crown Fountain to be a tribute to the people of Chicago. The faces that appear to spit streams of water out from the towers are those of 1,000 Chicagoans rotated at random. Though water only flows from mid-spring to mid-fall each year in consideration of Chicago’s often nasty winter weather, the LCD screens are on full time. This one and the next one – Andres Heller-designed – have been shown in here before, but their fascinating uniqueness deserve a reprise. In my opinion, there are some things which never get old. This is from the entrance to the Swarovski headquarters in Wattens, Austria. 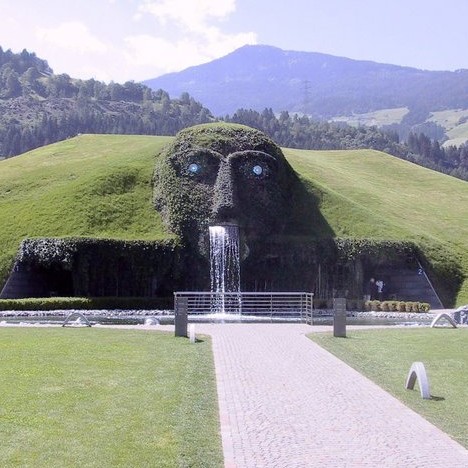 William Pye – a killer website here – is another searcher taken from among the multitude of artists featuring water in fountains as well as in actual works of art – or both. His work typically is most identified for his incredible Vortex Water Sculpture called Charybdis – here it is: 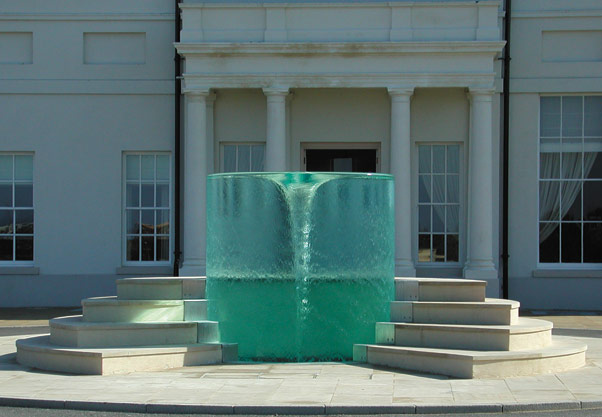 Other works of Mr. Pye are clearly constructed by someone who is utterly fascinated with water and its effects, such as this gorgeous work below and a more distant perspective of the same work taken from farther out. This work is called “Canyon” and it fits: 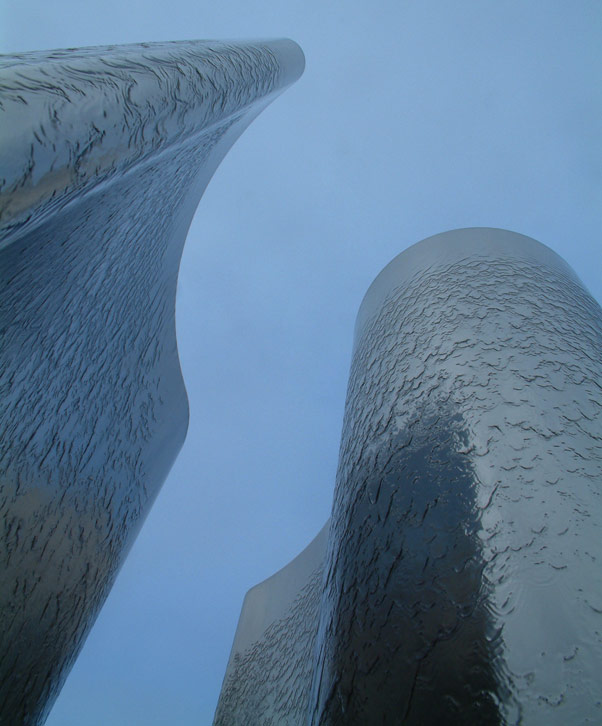 Please enlarge these to get their fuller effect –

Other William Pye works include this gorgeous metal piece outside of Lloyd’s Shipping in London, a work entitled “Argosy”: 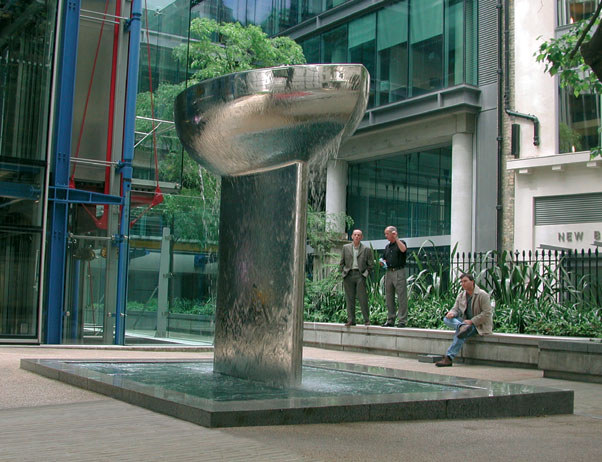 Pye’s ultimate fascination did indeed result in ways and means to watch the kenetic properties of rushing water as it appears as a flowing entity over different surfaces and at different pulsations. He was also hugely interested in how light performed in and through water, a gift he dealt out very lushly.

Below is a 6 story drop of a cascade which is attached to a wall. It’s pretty long but totally worth the look in here:

The cascade consists of a vertical rill of water flowing down six stories of bronze panels that are sculpted to create a ripple effect in the water. Four glass panels forming the water wall are suspended from a cantilevered tubular structure, which both holds them in place and acts as a conduit for the water supply. Water is distributed evenly along the length of the panels and flows over the back and front surfaces of the glass. The water is caught in the shallow granite pool into which fibre-optic lights are set. These pick out the colours in the bronze backdrop and highlight the shapes created by the rippling water. 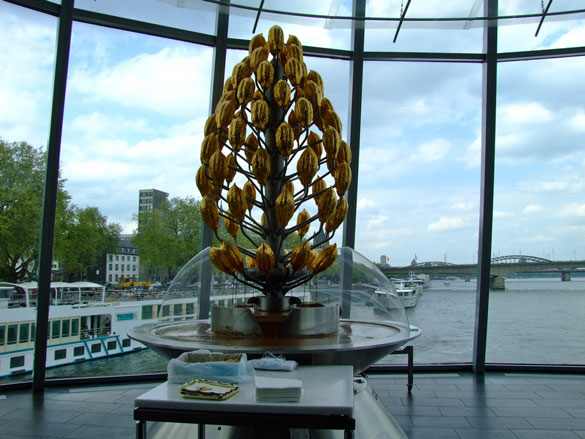 This “Chocolate Fountain” you can actually dip from. It is from a place with the Other-Worldly title of the “Cologne Chocolate Museum” which, in itself, is enough to drive certain persons I know to light-headedness. I have therefore supplied a link here – Chocolate Museum – so that they can verify its existence and plan accordingly.

My advice is to wait a week.

A small bit of distraction, first……….. I always hate omitting Tivoli, simply because I think rather ancient stuff rocks: 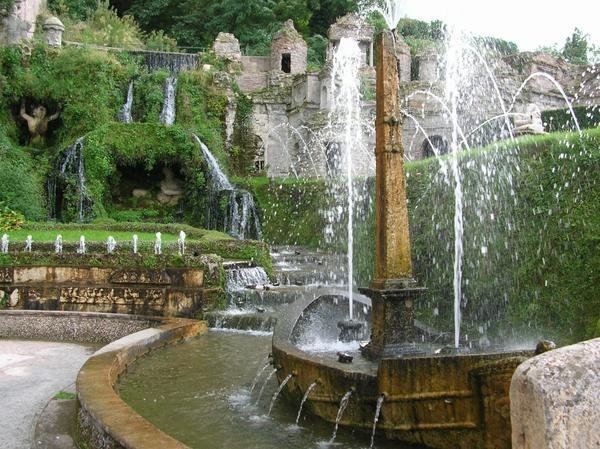 But then, I was in Korea for a while in another life and what they did to this bridge I can’t help but be proud of and to absolutely adore: 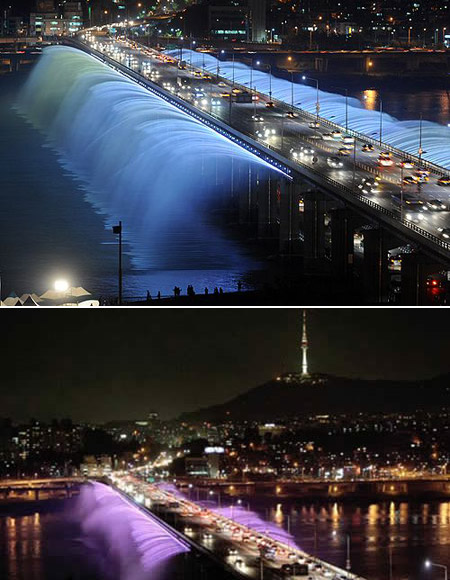 Here is a very cool video of this – Banpo – bridge in operation: