Once again I have opened up the archival Vault of Uselessness in this blog to give another look at some of the things I like most. As is the case in any blog, the selfish interest of the author is thematic – and, in this case, plain fun. I watched this movie again the other night just for giggles and it amazed me for a second time. The carcasses of ancient animals which had become glazed with stalagmite juice, basically “Quartzified” into stone, reminded again me of the sheer scope of this discovery.

Human art dating from over 20,000 – 30,000 years ago and just as subtle and beautiful as if it been accomplished by talented modern hands, displayed gallery-like on the walls of ancient caves, is only one of the fascinating wonders which Werner Herzog takes us through. His mix of music throughout the film is another glory of novelty. The best browsing of this post would be to begin the music video below and then read the text. Try that.

Reading Henry Miller some years ago, I never forgot his delighted discovery and his fascination with the term “Chthonic” – as if it had appeared to him as a magical key to describing ineffable events. This film and even its sounds are completely “Chthonic” and of a piece. It reminds me of nothing – they both stand on their own.

To the archives, then……….(pictures enlarge by clicking).

For further investigation, here is the delightful Wiki entry for these incredible caves:

OK, this is a stretch for a simple landscaping blog. Just know this: I know that and let me say my piece. 😉  It’s never stopped me before, has it? This one deals with the Earth, having said that, and that’s my own area. Dirt rocks and so do rocks.

I recently went to the movies, chucked on my 3D glasses and watched one of the most stunning movie events I have ever seen. The film is called “The Cave Of Forgotten Dreams” and I cannot possibly recommend it high enough. It was directed by Werner Herzog and deals with an inside look at the astonishing Cave of Chauvet-Pont-d’Arc, where artists as long ago as 32,000 years plied their art of cave-paintings, using the walls of this gorgeous, previously-hidden cave as their canvas and using the folds and 3 dimensional aspect of the terrain itself to provide depth, apparent motion and breathtaking artistic ability. 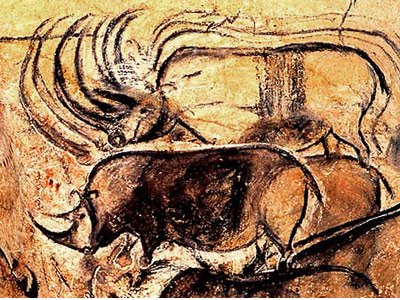 The extremely cautious French Government goes overboard in scrupulous preservation paranoia, and the film mentions this. Protecting the inside treasure is testified to when references to them shutting the cave off to visitors for a few months was felt necessary owing to “The breath of visitors is causing a mold to adhere to the walls.” This is a look inside – a rare moment in time and one which may or may not ever be replicated.

The cave simply reveals life at that time in a manner which nothing else possibly could. The genius is inside the art itself, of course, but the creative genius of Werner Herzog amplifies it, juxtaposing all this with modern perceptions of an era, seen from the best anthropological, psychological and paleantological minds of our generation. 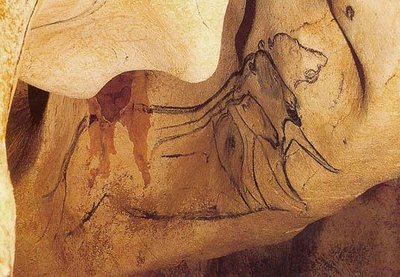 Borrowing this piece of breathless excitement emitted by  a movie review in the New York Times:

“The cave was discovered in December 1994 by three French cavers, Jean-Marie Chauvet, Éliette Brunel Deschamps and Christian Hillaire. Following an air current coming from the cliff, they dug and crawled their way into the cave, which had been sealed tight for some 20,000 years. After finally making their way to an enormous chamber, Ms. Deschamps held up her lamp and, seeing an image of a mammoth, cried out, “They were here,” a glorious moment of discovery that closed the distance between our lost human past and our present.”

How cool is that? 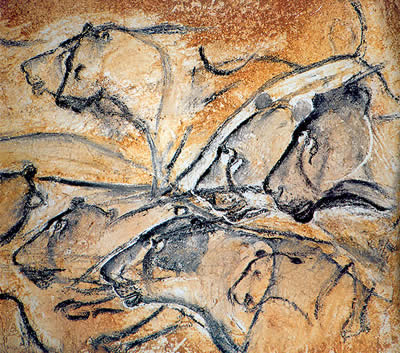 The movie possesses so much depth and range of emotion and the hidden tension of discovery, that it nearly stands alone as an experience of brotherliness linking ourselves with our incredibly ancient past. I have to suspect this is an instant classic, no matter how uneven it might seem at its start. The punch is delivered as we advance, revealing all the incredible wonders this cave has to offer. Bear skulls, complete vertebrae of gigantic land animals, pictures of the rhinos, the Ibex, horses, lions, bison adorn these walls in graduated impact as the camera gets released later to fully explore.

Anyway – I guess you can tell I enjoyed the film!  😉

And here is where we return to the premise of this post. That Herzog has created a masterpiece I have little doubt. When you feel literally blessed and extremely fortunate to view a film, then these emotions tell us something very important: either we are nuts, or else this guy put together a magnificent piece of pure genius. I naturally choose the latter. As I said, the uneven beginning to the film requires a bit of patience. There is information coming in rather placid and somewhat pedantic ways, although there are indeed gorgeous pictures of the paintings and the access to them at the same time. The geological wonders alone are fantastic and impossible. Calcite galore, stalactites and stalagmites adorn the view – some literally impacting the paintings as well as such things as footprints of a bear as well as that of a child. The protective measures taken by the French is also droned on about at length – but – and here’s the thing:

It all makes sense and comes together incredibly effectively as we witness what a treasure this is. The drama of this discovery is served well by Herzog and the ineffable music streaming from the cello of the master cellist, Ernst Reijseger, which takes on an increasing urgency and even pathos as we discover this enormously ancient past of all of ours. The musical work of Reijseger is of a quality I have rarely seen before – it is clearly evocative and it seems utterly spontaneous as it impacts us concurrently with the images we behold and the verbalized statements from the long list of exceptional people. It courses through the film in a sensuous, even mysteriously sinewy way – somehow absolutely perfectly emotive and even responsible as we peer into who we once were. It is somehow totally fitting that we should answer the very height of their art with some of our own.

There is humanity here and a respect for our past. I mean a deep respect for our past. Oddities galore – it appears Neanderthal man was around as well as our own Homo Sapiens species evolved in the same neighborhood. Entire skeletons of the animals of the day appear, close up and personal.

I’m including aspect of Herzog and Reijseger’s traveling “Cine-Concert” which is entitled “Requiem For A Dying Planet” which toured to rave reviews globally. The reason I include this apparently non-related and somewhat disjointed piece is merely to illustrate the level of artistic genius this group operates at. Obviously, their goals are as high in terms of the stewardship of our planet – a message it would seem we could use ample measure of. I give you the “Requiem”:

5 thoughts on “The Nature Of Genius – Werner Herzog & Ernst Reijseger”