Using various grasses in landscapes is not particularly new. Dating back from a period when the UK’s interest piqued towards the new Pampas Grasses, imported from the more arid South American countries, grasses soon made their usefulness spread to the wider world. It’s certainly easy to see the attractiveness of Pampas Grass, and even more so when their sheer size and rather stately presence becomes bedecked in such gorgeous seed fronds as those show below.

The truth is, grasses were especially greeted owing to how these large broom-like fronds manifested. Their dried effects have become highly desirable in indoor settings, often dyed but always soft and sturdy. There’s really nothing quite like them. 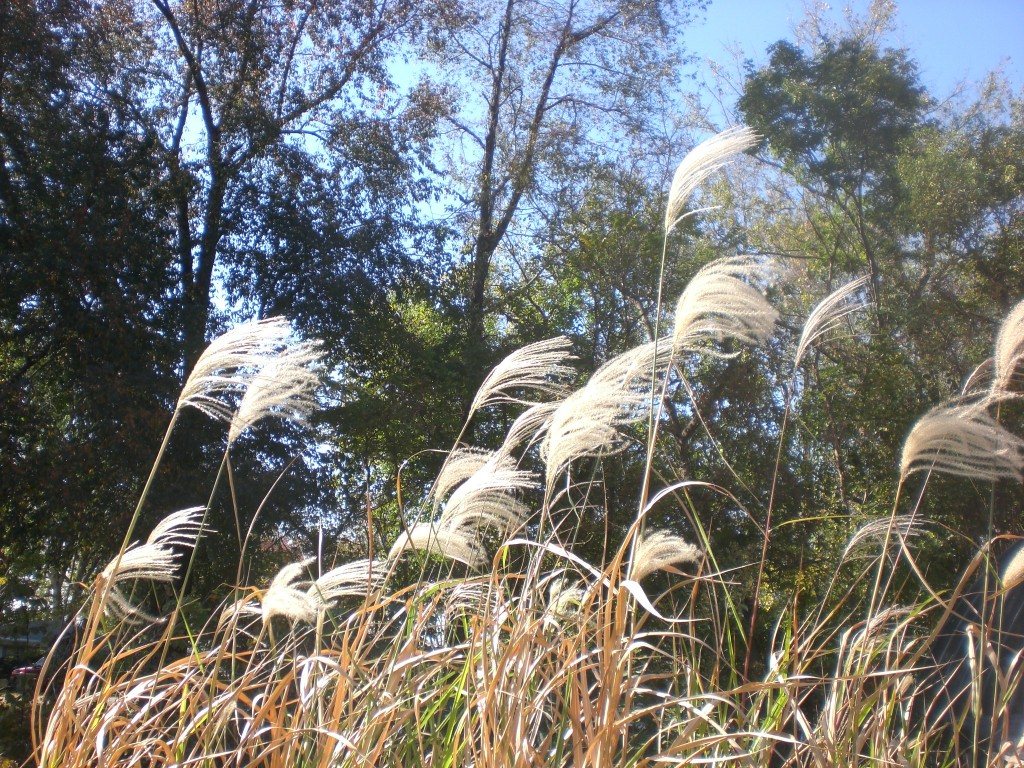 But the more intrepid gardeners and landscaping aficionado’s stayed hard at work, developing and hybridizing yet more oodles of newer grasses. The results are simply mind-blowing. It does seem that grasses are receiving more innovations than nearly any other garden/landscape species. Here is a bizarre plant, full of the most unusual potentials -note the color!

This is the Panicum Virgatum “Prairie Sky“.

I’m not sure we were entirely ready for blue blooms on grasses, although, to be honest, after seeing the wonderful Muhly Grass (Muhlenbergia Capillaris) which is being more widely used as accents in landscapes, one should probably not be the least bit surprised: 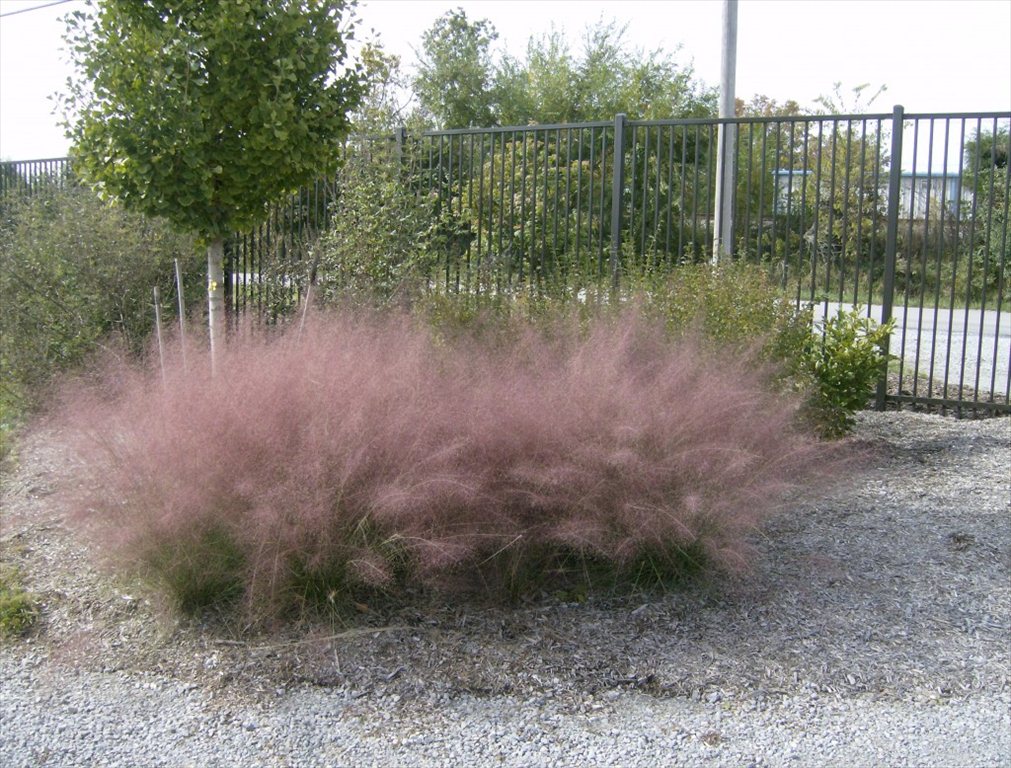 We find ourselves, as designers and plant lovers beset with a range of options which is nearly brand new – and offering entirely new effects to present to the wider cosmetical world.

The very shapes and forms of these gorgeous species make incredible “edge softeners”, appearing in a fuzzy tight globular form even prior to the emergence of their lovely fronds. As a pure shaped effect, the roundness and soft lines of these various grasses do not even take advantage of their other attributes, which can include variegation and strange and very colorful striations: 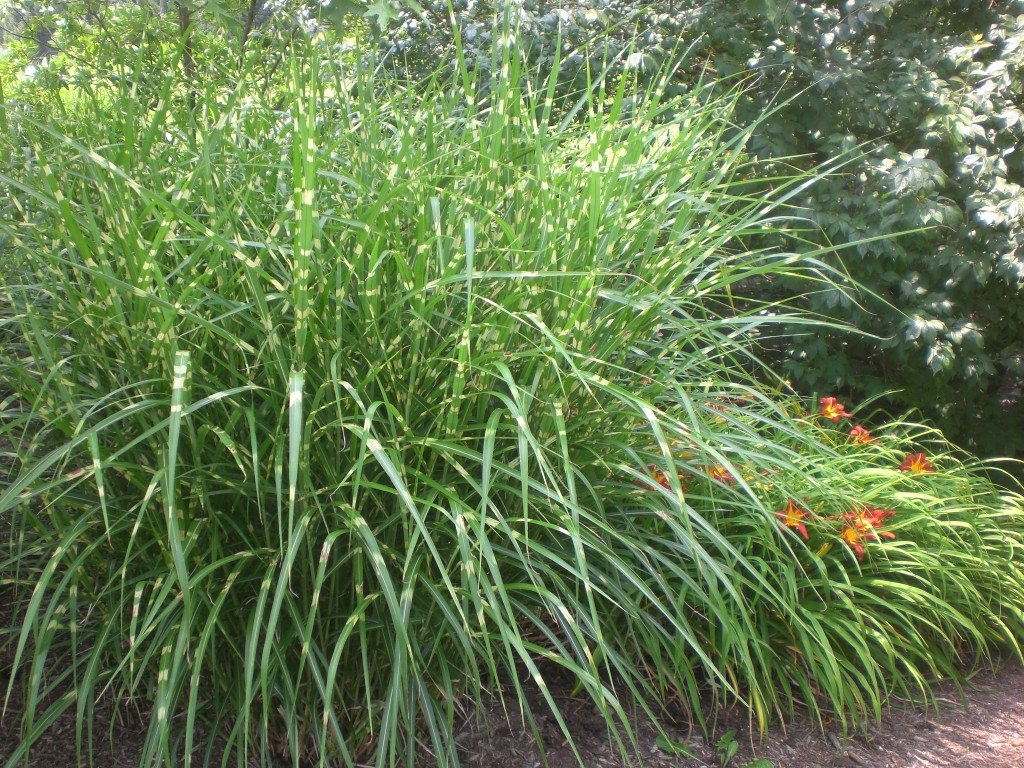 They mix well with other plants, such as lilies, as evidenced here in the Papa John’s Pizza world headquarters in Louisville – a fascinating bit of landscaping a bit East of town which features not just these gorgeous grasses but an extremely impressive waterfall and lake.

In appreciation of someone’s elegant craftsmanship, the waterfall at Papa Johns:

Some of my favorite grasses we implemented along the mosaic pathways at the Portland, Oregon Chinese Garden, during the construction of that killer city block’s worth of ancient and white hot landscaping:  😉 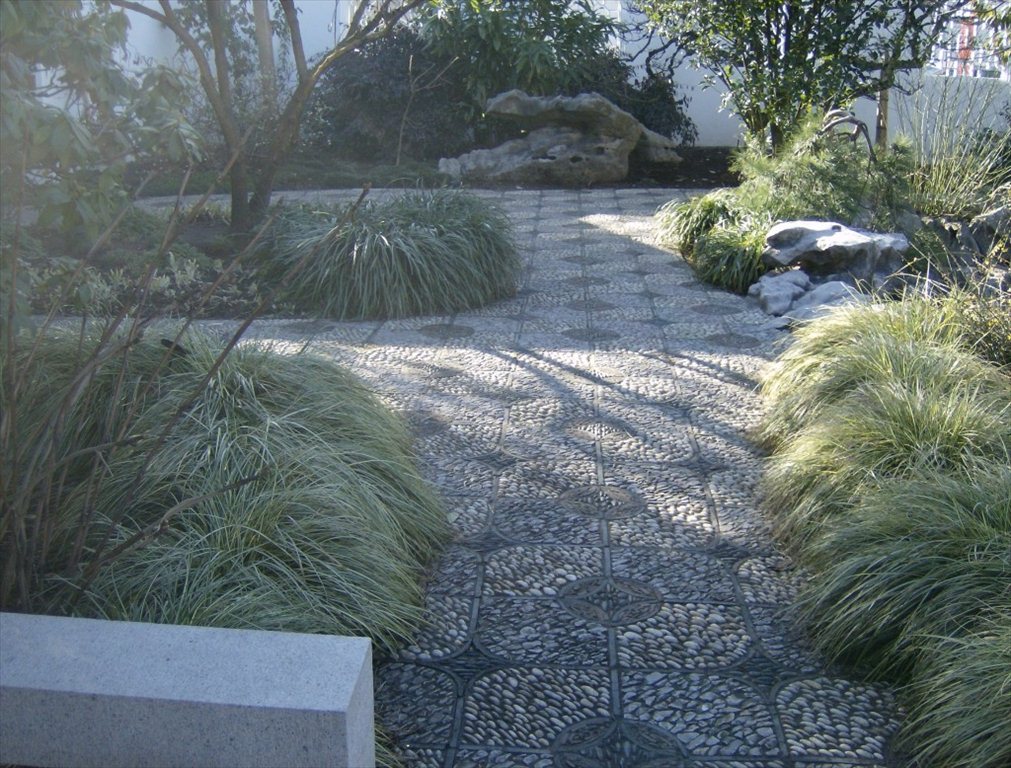 One can readily observe the referred-to “softening effect” of such charmingly lumpy and colorful small plants which – when massed – provide  the beginnings of a virtual embrace by the landscaping surrounding this well-crafted walkway.

Smaller and less awe-inspiring grasses such as these rather simple, non-invasive clumps of delicate-bladed grasses, bend in the wind, offering a kinetic green presence which amplifies the senses and presents us with a helpful presence in spotlighting these gorgeous glass sculptures displayed here at Yew Dell Gardens in Louisville as produced by local high school artists and offered for sale at the time. 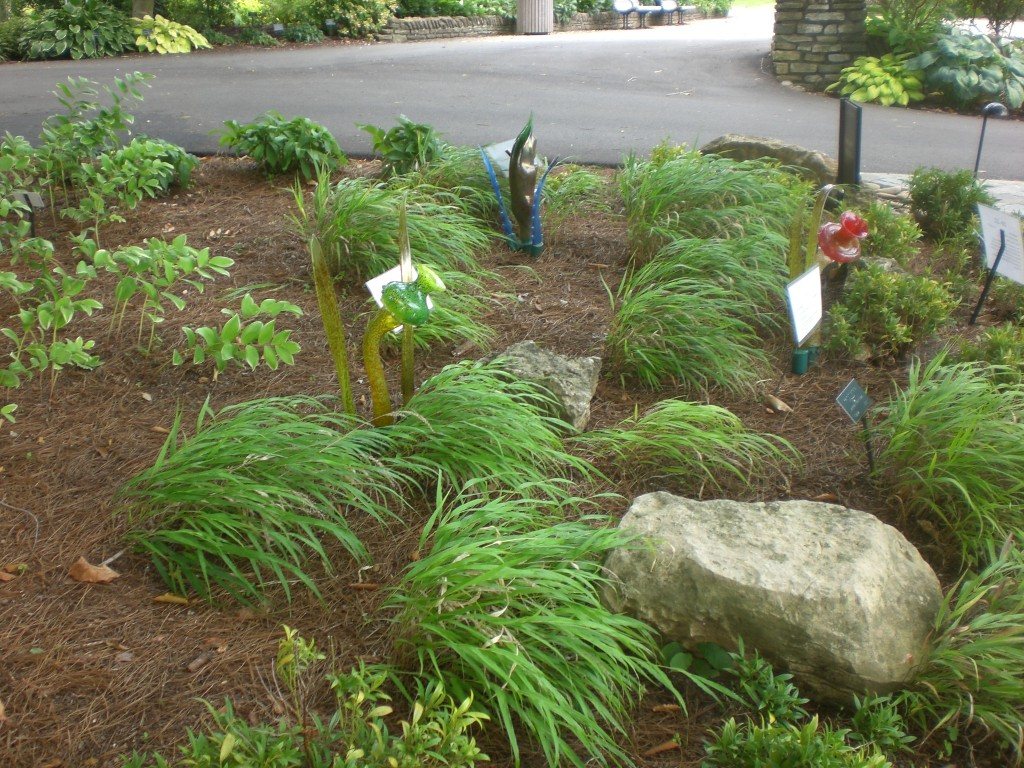 Grasses can add “peculiarity” to an otherwise somewhat normal environment, not simply because of the fronds, but with the content of its shape as well. 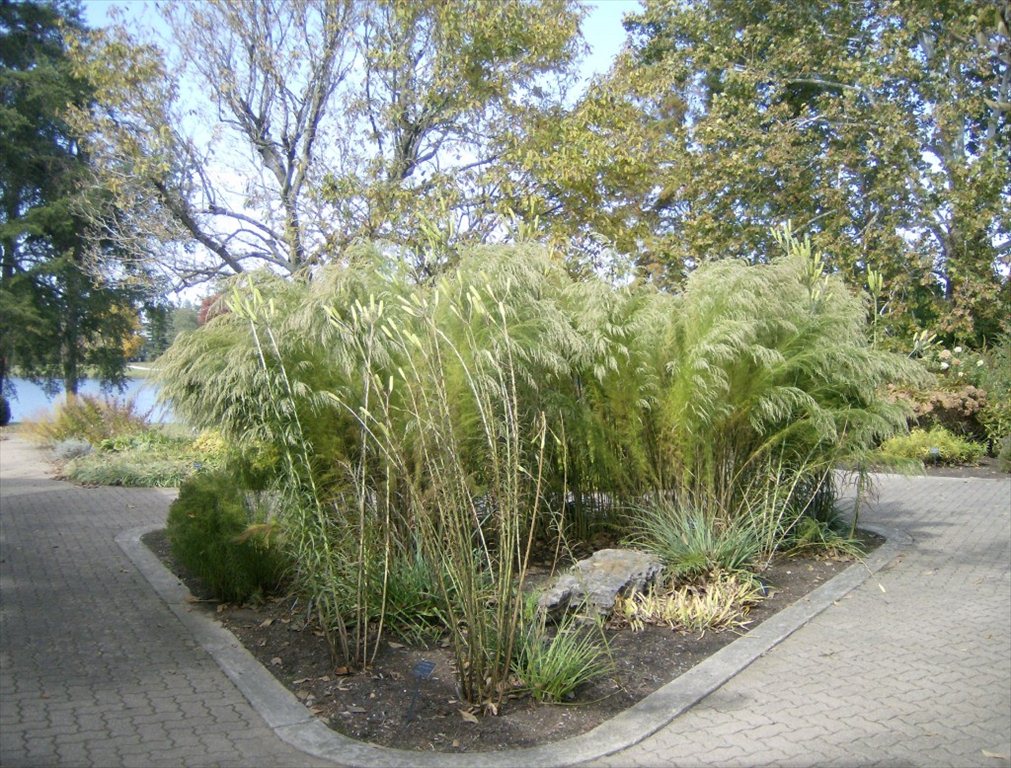 Highlighted here by a load-bearing Sun, the magical look is achieved in the gorgeous fronds of this Miscanthus as the sun highlights it’s crystal-seeming clarity. 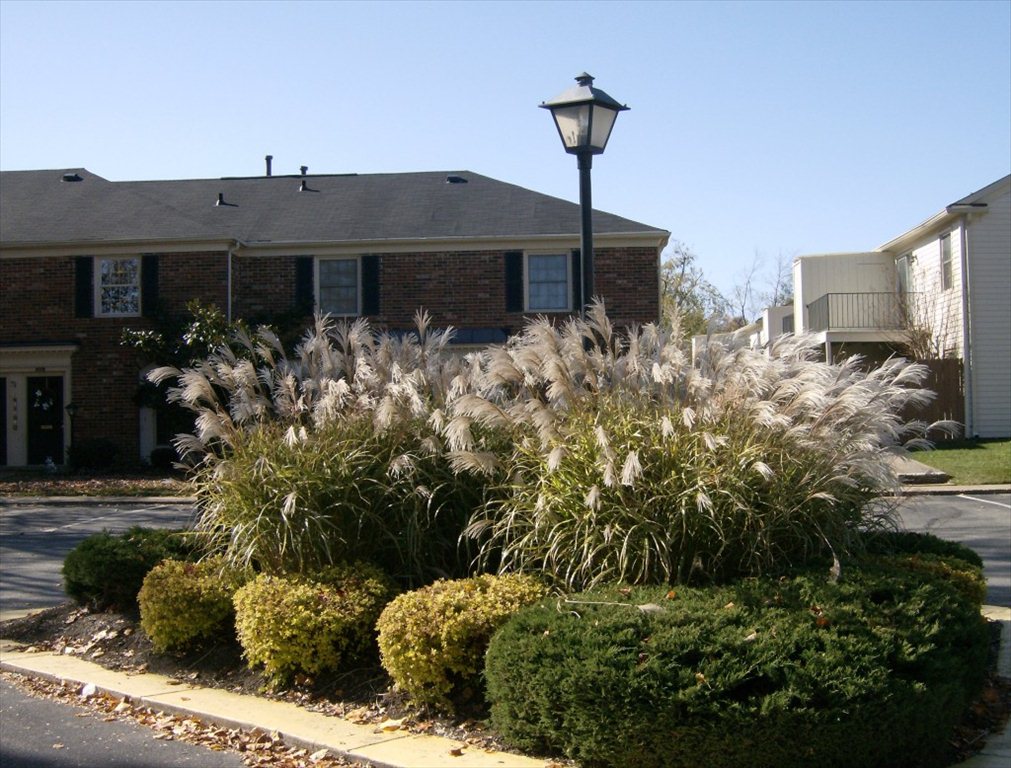 I have become an outrageous fan of grasses in general. When combined with the various sedges and water grasses such as Papyrus, the realm of these plants goes from arid to swampy in short order, offering a range of planting possibilities it is nearly impossible to lose at.

4 thoughts on “The Use Of Grasses In Landscaping”