I got a huge break in the timing of this event. At the time of my departure from Louisville, the temperature was an unbearably high-90’s phenomenon, complete with a humidity which drove the “feel’s like” temperature (an excellent and appropriate categorization, I must say) to an unlikable 110 degrees or so. Even breathing the air was hot on the lungs. The stillness of the air added a completely intolerable element, lol, particularly for those – such as myself – stupid enough to try working in it.

Ah, blessed Portland. 😉 Rapidly becoming an alternate Urban Universe and my definition of a very ideal habitat for countless reasons (which I aim to address at another time), the city still has some of the greatest-ever hanging baskets spread through town, hanging from lamp posts and the likes – always absurdly full and cascading down in these wild floral masterpieces.

(click any image to enlarge by one or two times) 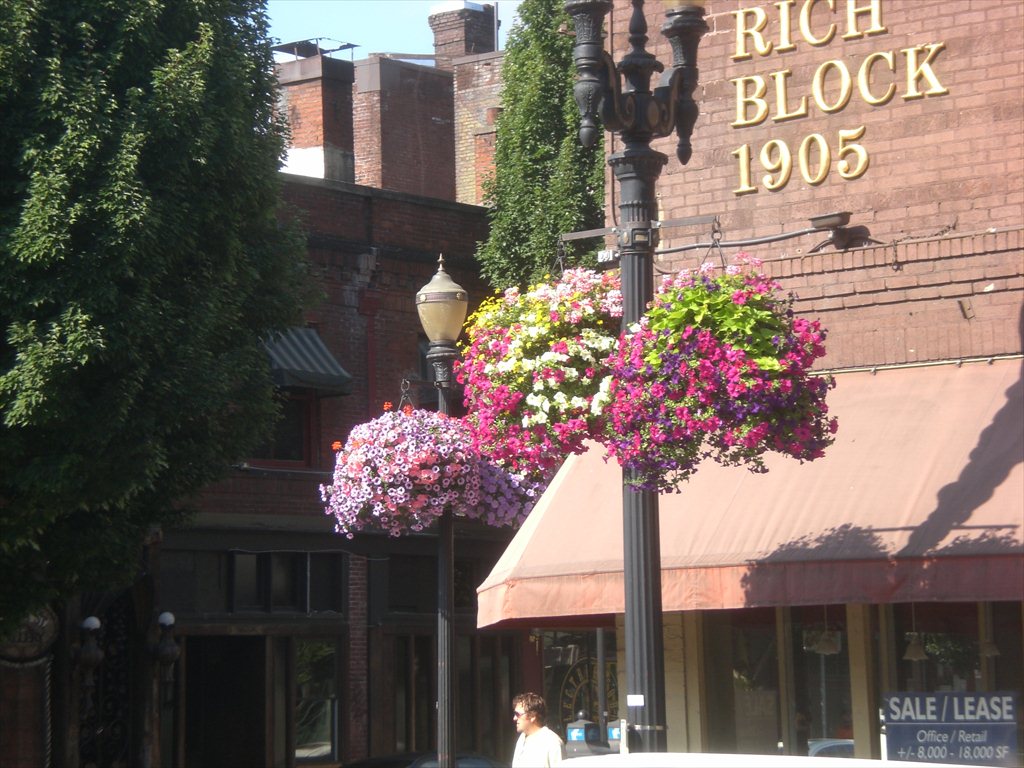 This is the neighborhood bordering on – or composing – “The Pearl  District”, Portland’s historic Chinatown, and it was my destination this beautiful, fresh early morning. This is where Portland’s now-famous Chinese Garden is located. The Garden has a very special meaning for me inasmuch as I figured somewhat in the installation of the irrigation system which feeds it all.  I was also connected with overseeing some of the gathering of plant materials and liaising with the Union company which did all the foundation work and original excavations. I also spent ample time with the Chinese fella’s themselves who composed the 150 person workforce, sent directly over from Zou Chou for the construction. They did amazing work – much of which was fully fabricated by them in China prior to coming here.

Such as this stunning piece of woodwork which has always simply blown me away: 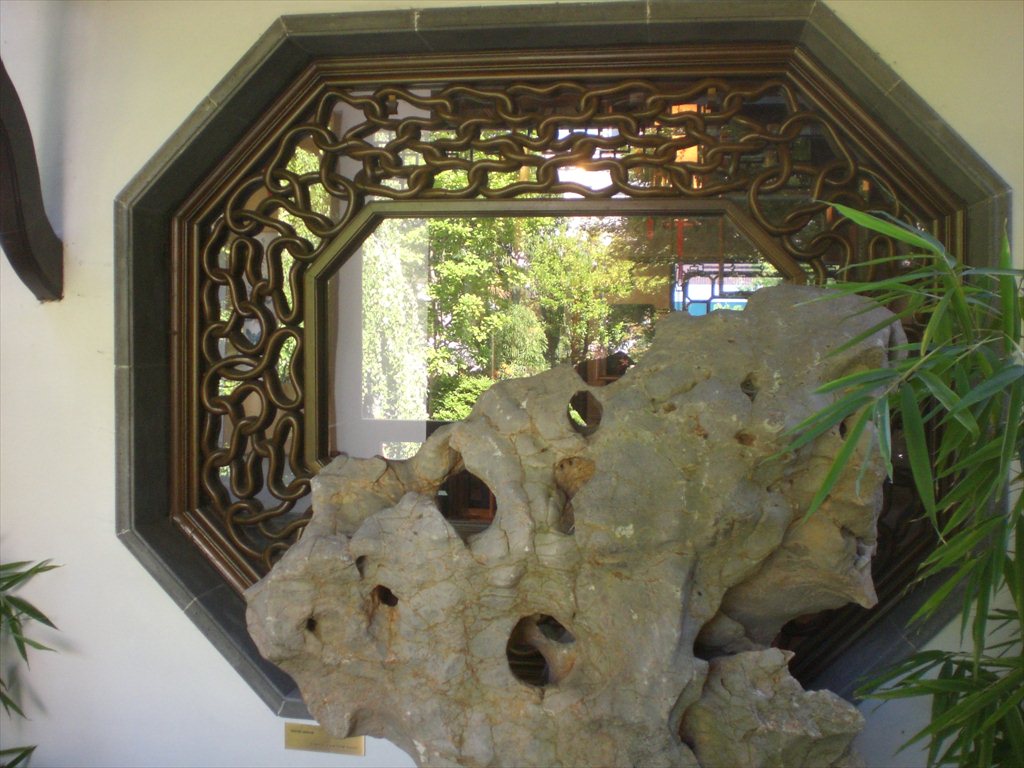 Which is all to say I went to a few fascinating seminars, worked on the job next to the contractors on every side of the construction and that I also shared my smokes with some pretty cool Chinese craftsmen. Big smokers, these guys.  😉

So I had a chance to watch this edifice from the ground – up and I can assure you, it was totally fascinating. I don’t think I had a bad day. I recall watching the guys using these monstrous 2″ thick hemp ropes, suitable for circus workers, hauling around the very first basic products – chiseled granite – hand-formed into hard rectangles used as walkway borders, bridge spans and even railings as the picture below reveals. Granite was everywhere and formed to make an absolutely  perfect fit where ever it was used. Absolutely everything one sees in this picture below the level of the buildings is granite, topsoil or water. Based on the fundamental solid concrete framing below all the posts and floorings, the entire edifice itself is from Chinese Granite – that is to say, everything visible. 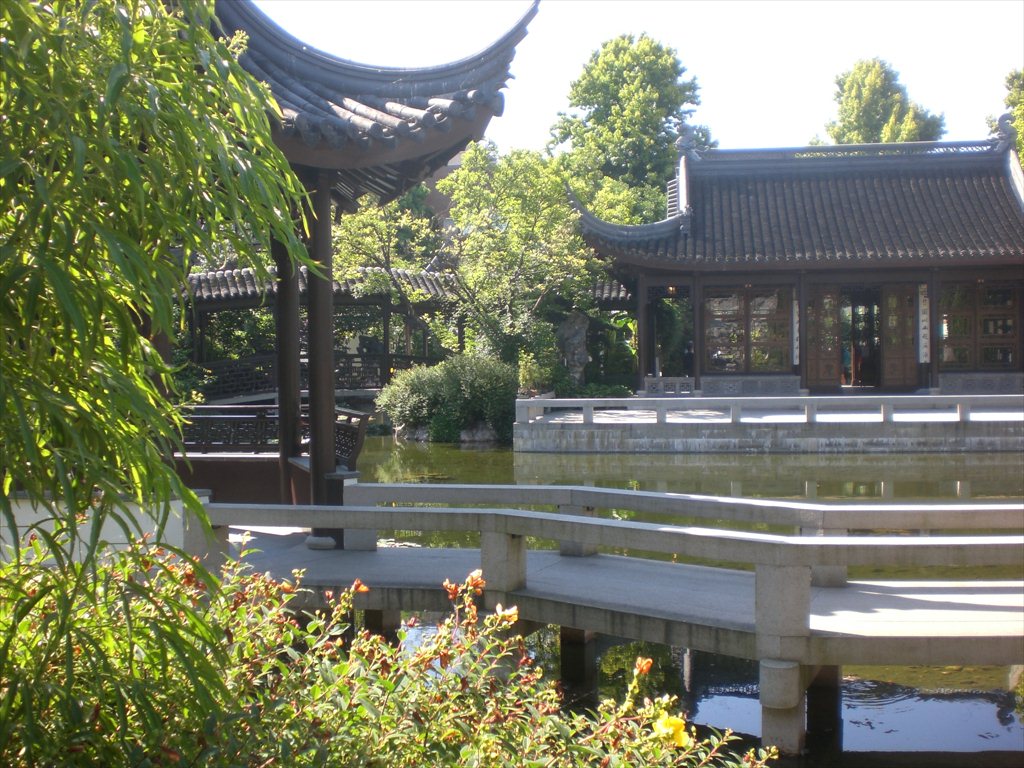 Prior installations of Chinese Gardens by this particular group had taken place twice: In Sydney, Australia just prior to the Olympic Games held there and at the Museum Of Natural History in New York, New York. Since Portland had a Sister City relationship with Zou Chou, I believe it became a natural fit to use these absolute experts for the celebration and admiration of some of the very greatest Chinese contributions to architecture – and more specifically, to Landscape Architecture.

Man, it sure worked. Let’s view some random shots of this precious resource.

Below is a view available to pedestrians outside the garden via a few well-placed windows inside the containing network of walls, engineered to relish a little bit in its own right, and to excite visitors enough to check it out.

A sense of unlimited space and upcoming mystery is what these interesting openings are all about: 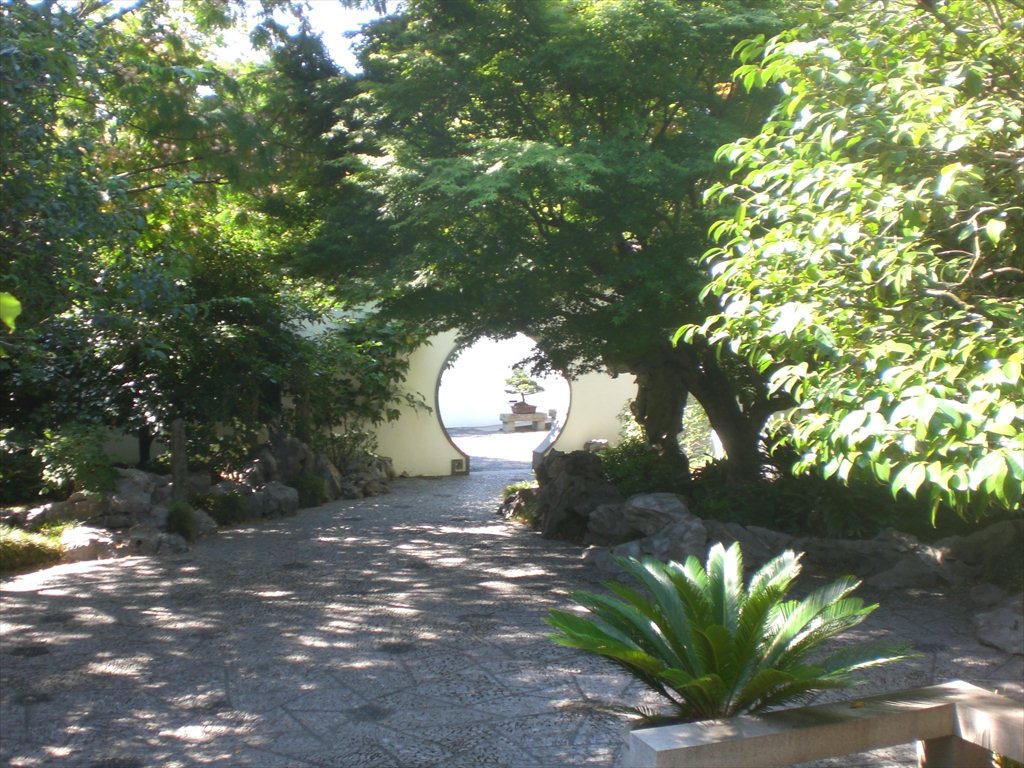 Even small windows are engineered to provide a big barrel’s worth of exceeding interest as we gaze at complexity and robust health – the ultimate Feng Shui.

Windows and doors perform vital functions as true “Gateways”, producing and solving mysteries as we sojourn through these artful passages – 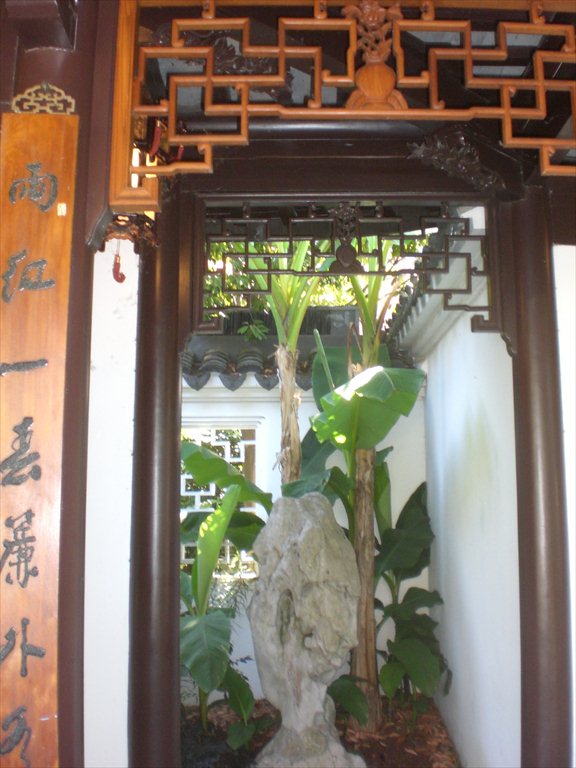 Sweet views – magnificent surprises – gently surround us as we suddenly realize how rich a relatively small space can really be. 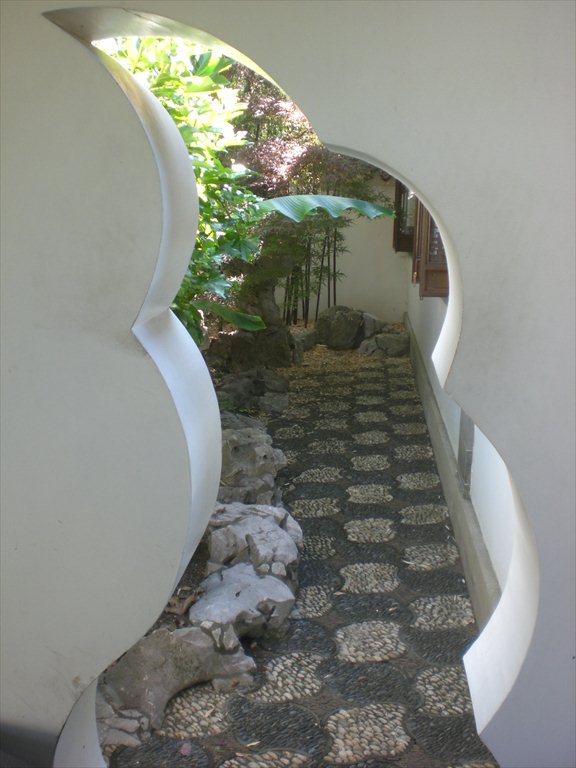 One third water, one third plants and landscaping and one third buildings of ineffable delicacy the entire place simply redounds with a passion of ultimate competence and plain great sense. Yes, things make sense in this Garden – of course all those small stones should be arranged this way – it’s what the Nature of Beauty is all about, isn’t it? Using natural elements in novel and beguiling ways? 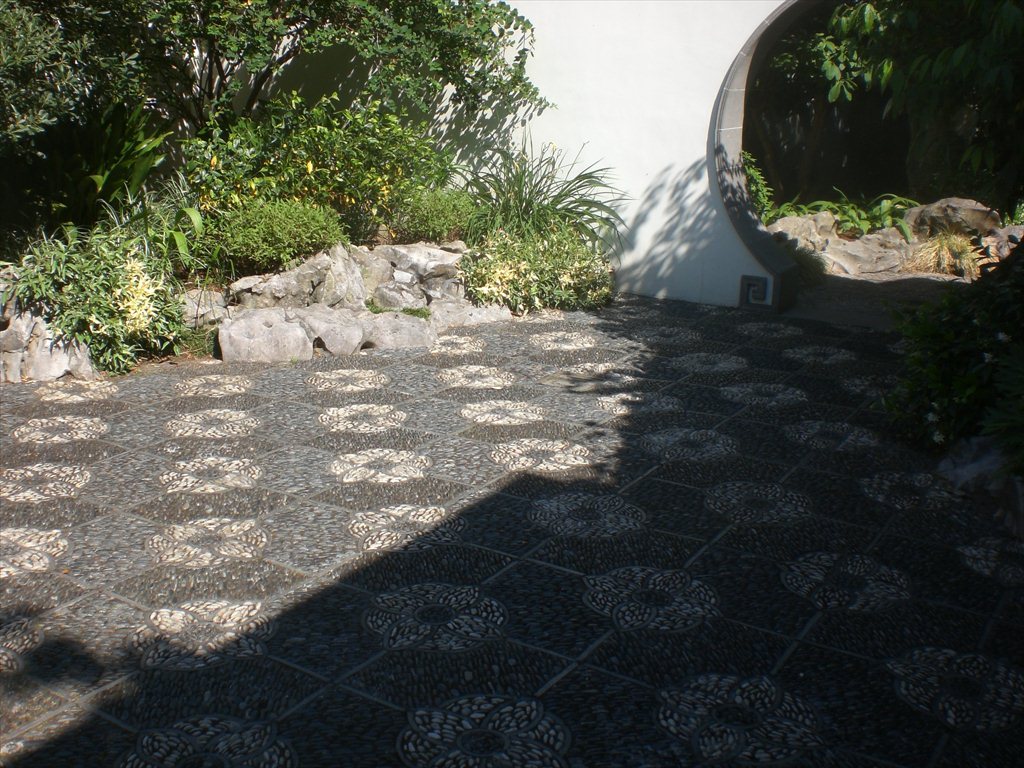 These stone pathways massage a passer-by’s feet. They perform a literal function aside from just sitting there like me – all dressed up – pretty as heck – and no where to go. Truly, the functionality of garden paths in the lore of Chinese Garden Architecture is deeply embedded in the notion of providing pleasure sensually and not merely visually. It’s hard to imagine a deeper regard for the body in simple architectural terms.

Always a sure winner for me, these little guys ought to find themselves a bit bigger in due time. You have to appreciate their organizing impulses in this cute picture: 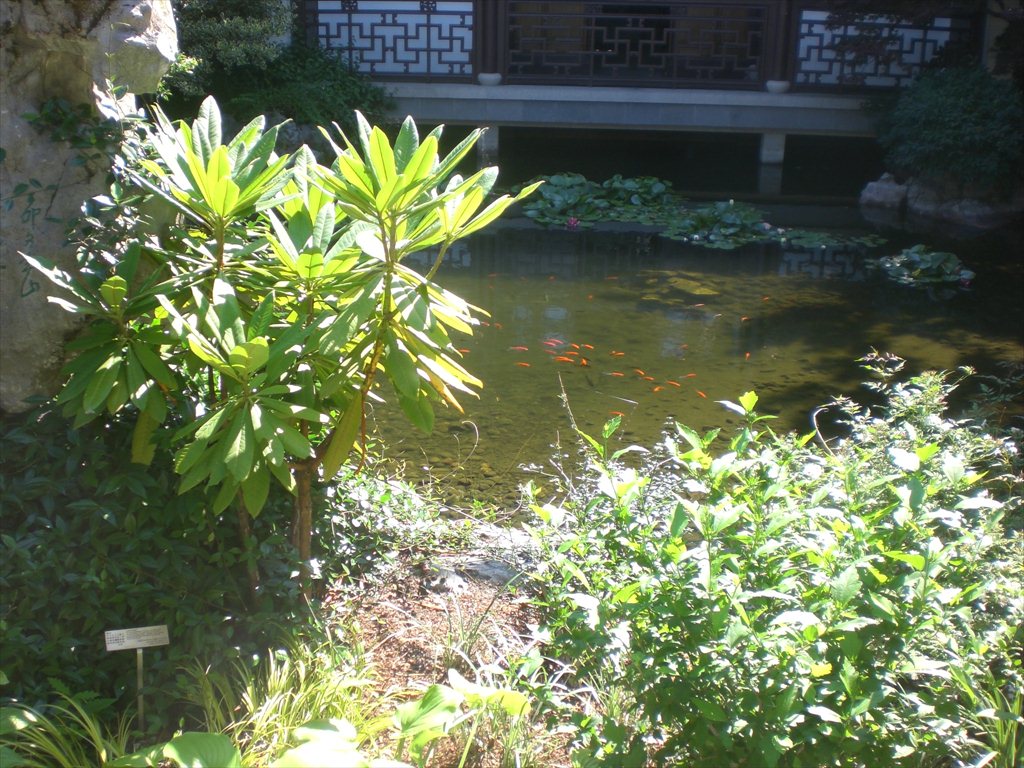 I’ll return for another post about this gorgeous place in a day or two. For now, I’ll close with just a couple shots from a larger perspective. The Willows are doing well!:

The “Mountain” looming over the enclosed water fall has filled in magnificently: 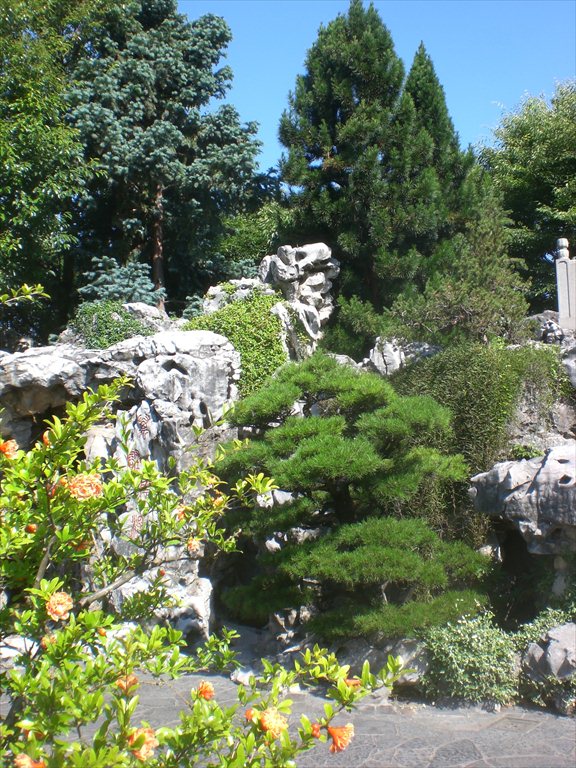 The Chinese Garden has most definitely improved with age. My respects are freely given to the stewards of this gorgeous place and certainly as well to those splendid early designers. Everything has gone a bit beyond perfect, marching right on into the Sublime.

3 thoughts on “A Summer Visit To Portland, Oregon – Part 1”