I just returned to Portland from a ‘weekend by the sea’ and I must admit to an extremely comfortable laziness caused by a deep drink of serenity and human sharing while staying at this cute little cottage, 4 houses from the beach in Manzanita, Oregon. My brother Mike and his wife, Lisa, are finalizing a year of renting it as a workplace away from home and a general spot for their souls to expand while the urban rush of Portland continues its mad dash to seriousness, somewhere “back East”.

Let’s face it, a scene like the picture below would quiet anyone other than the character in the picture which follows this gorgeous beach shot. This particular picture comes complete with a movable Fog Bank which was nearing a little eclipse of our sunniness at the time –

(enlarge any pictures by clicking on them) 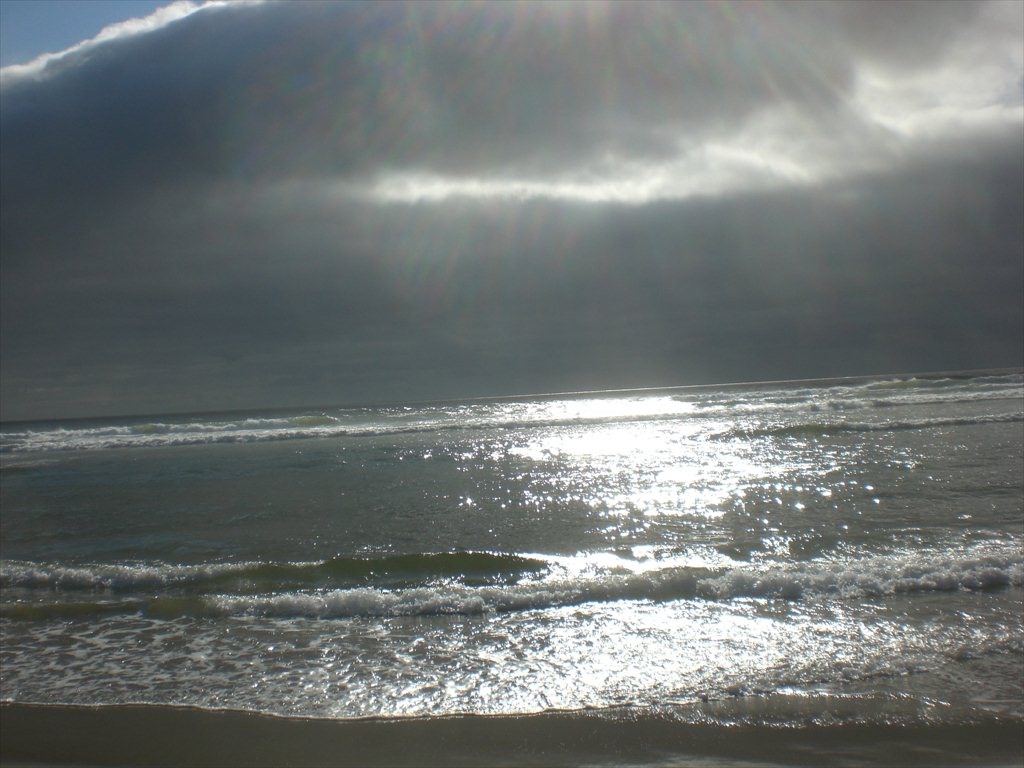 Try quieting this ball-chasing nightmare:  😉  He’s one smug ball-killer. His owners have fallen to secretly addressing the word “ball” in cryptic code a dog will never understand, citing the need to avoid a constant psychotic recurrance of a nuttiness only a “B – A – L – L” can cause. I time him out at somewhere near 2,000 miles per hour when in pursuit of the worthless enemy, the ball. 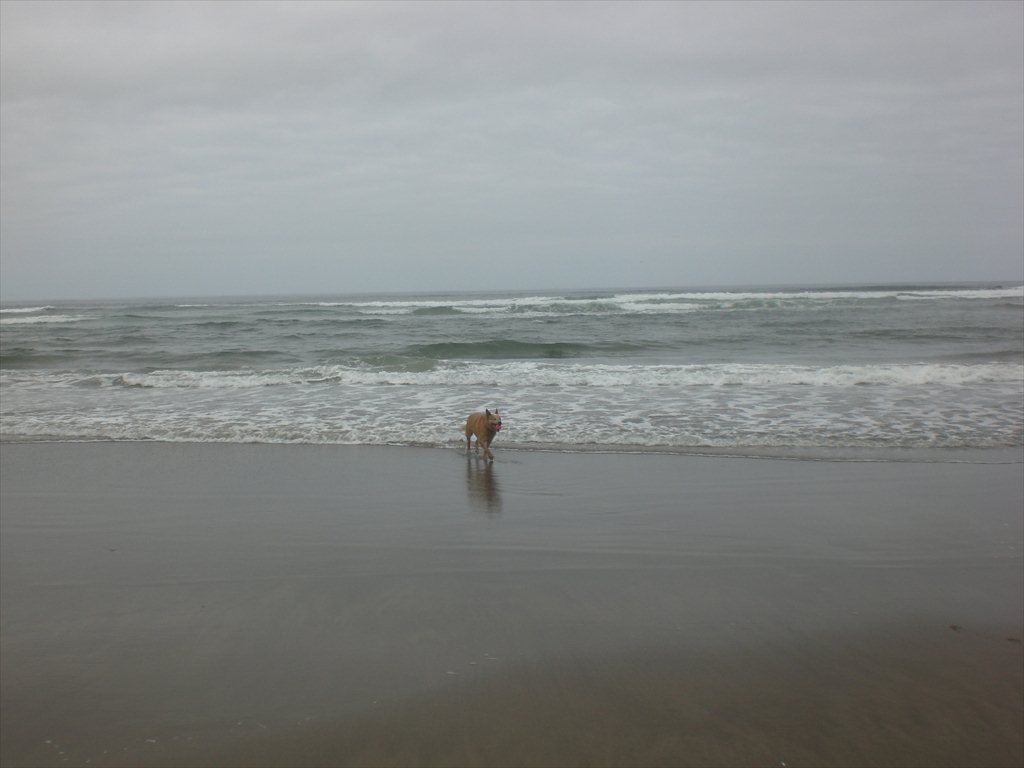 Manzanita carries an ambiance which is slow and thorough. Smiles are a regular sight on the small main drag, a street hosting an asymmetric amount of “cool places” compared to absolutely anywhere else, maybe on Earth. One can (and did) visit a candy store, strictly devoted to sweets, both commercial and store-made. Coffee shops, of course, dot the landscape at disturbing frequencies along with knick knack shops, real art work, a couple of wonderfully delicious and conscientious restaurants and the coup de grace – a fabulously eccentric grocery featuring a deli, great fruits and veggies, and aisles which could safely be called “one lane” or – better – Fat Man’s Misery. I especially liked the presentation of local seafood: 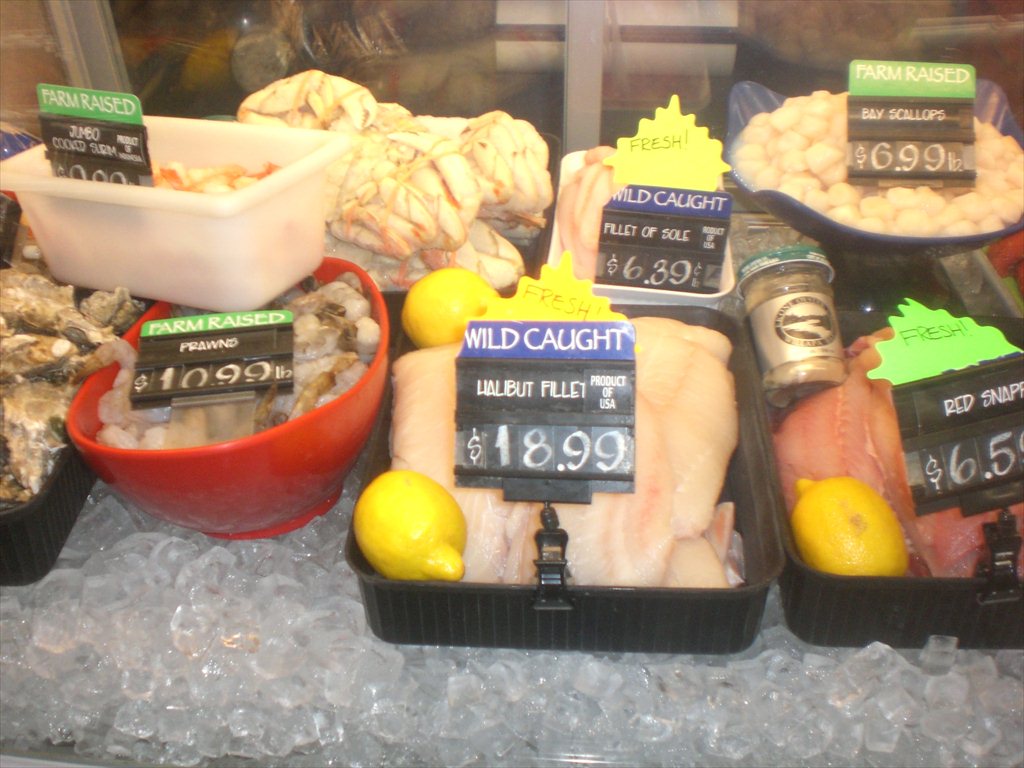 It’s fairly hard to get fresher than this.

Here’s an early Sunday morning look at the core of town from about 3 blocks up the street from the ocean. It eventually got quite crowded, actually, with this having been a huge coastal week for tourists in general, but this is a reasonable although skeletal glance at the city’s makeup. 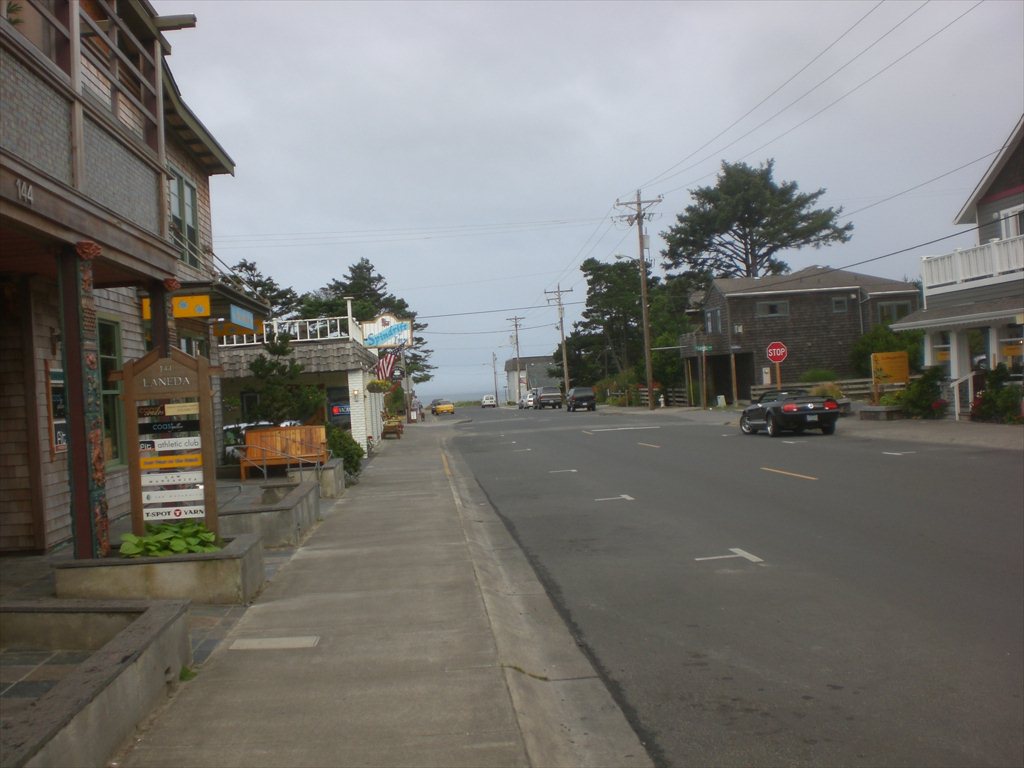 Of especial note to my gardening friends, seemingly every business had a small garden or container display out front. Along with the actual yards and landscaping of the entire area, this town is one to whom experimentation and an appreciation of rather uncommon plant collections is rife and totally alluring. As an example, these small containers feature Black Petunia’s underneath the deepest Burgundy colored Poppies I have ever seen. This one needs to be enlarged to fully appreciate: 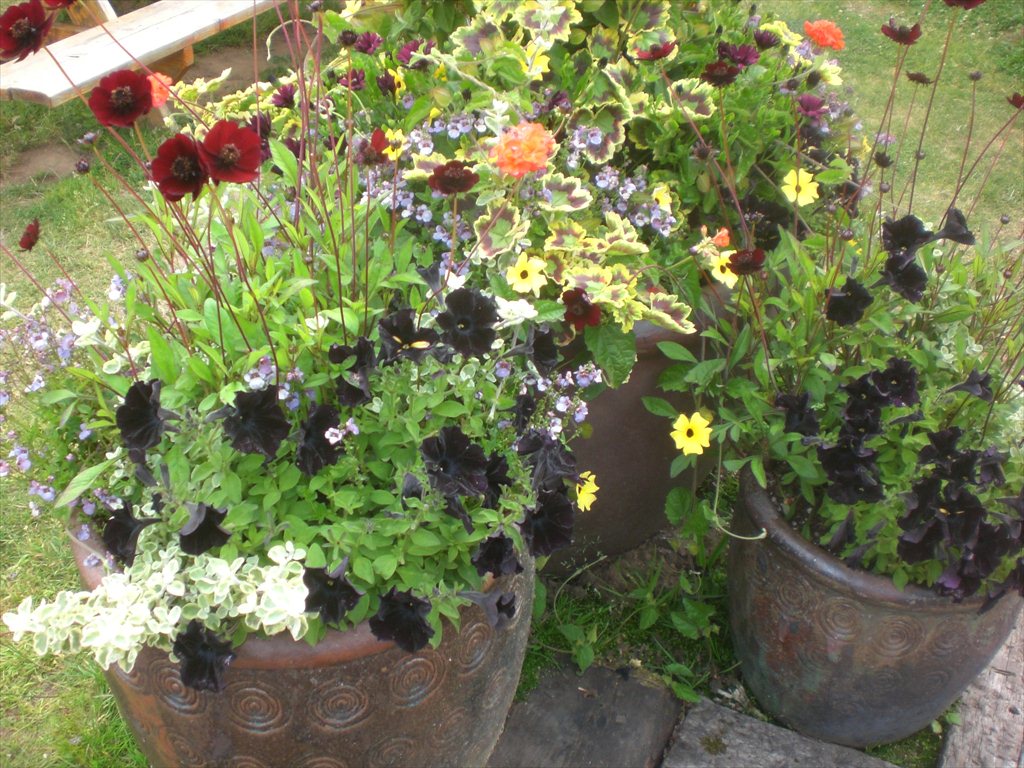 New Zealand Flax, long one of my favorite plants, adorn Manzanita as if some Flax sales dude peppered the place with bargains. A very sweet Mallow with its gorgeous yellow bloom back up the foreground of Salal, the local forest groundcover: 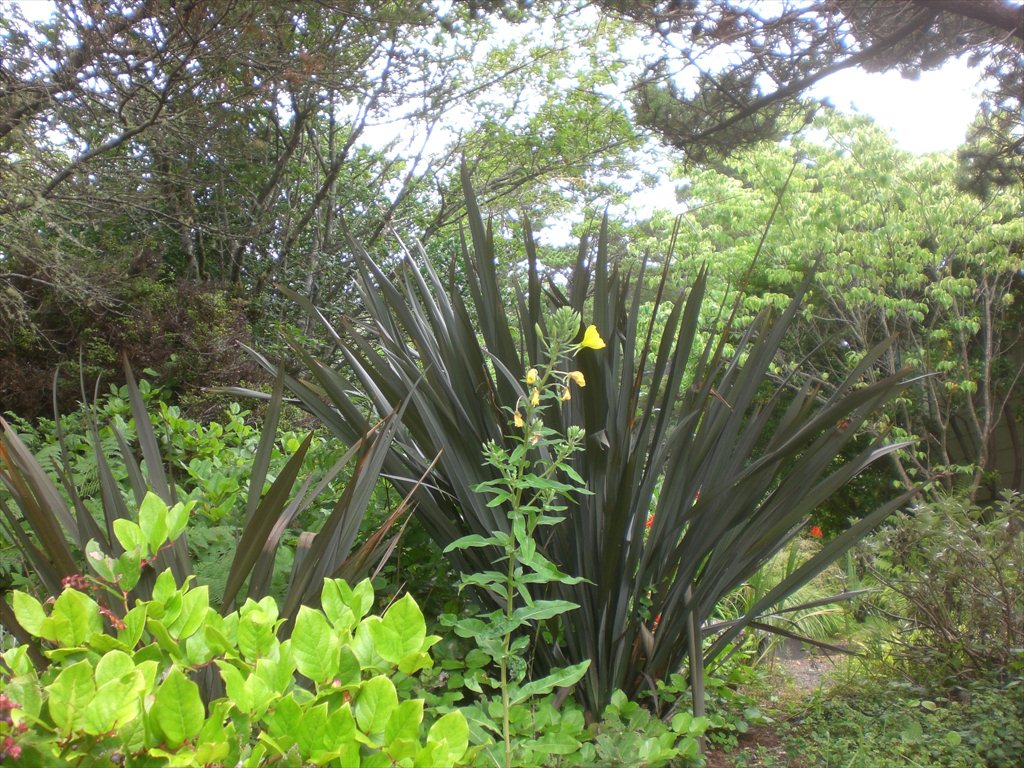 Poppies and Euphorbia accent the area, along with – at this time of the season – an absolute riot of Crocosmia, splashing a deep orange all over the town: 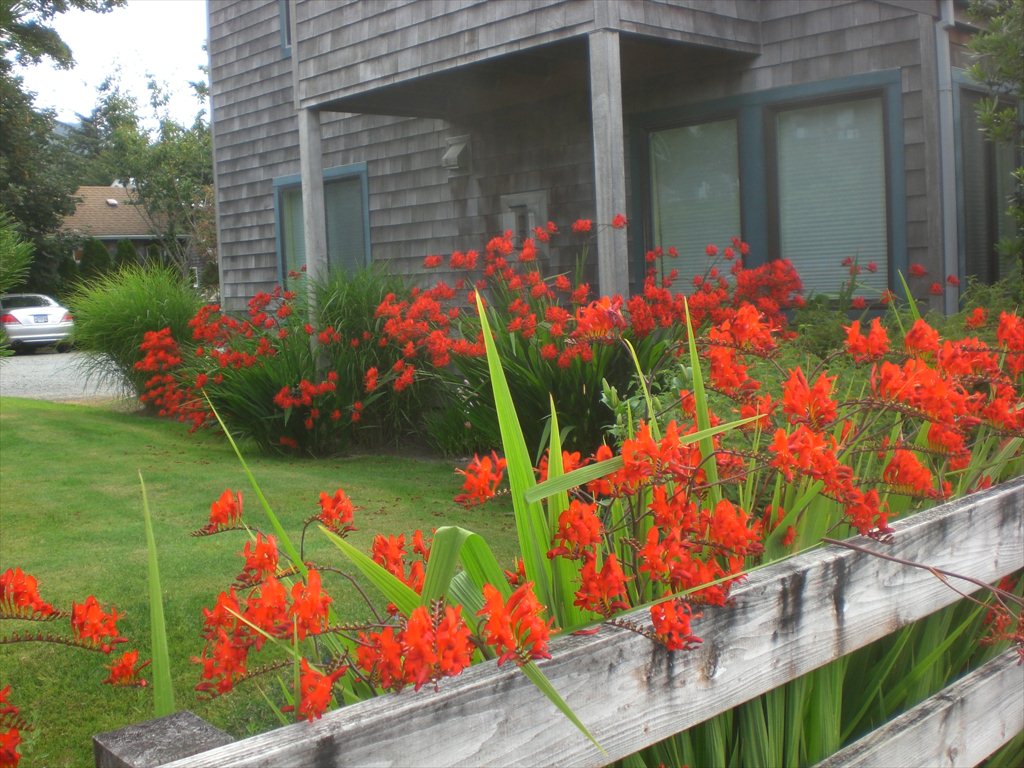 I really enjoyed the simplicity and depth this small tableau offered, featuring a Euphorbia of this real very simple beauty alongside a healthy Privet shrub: 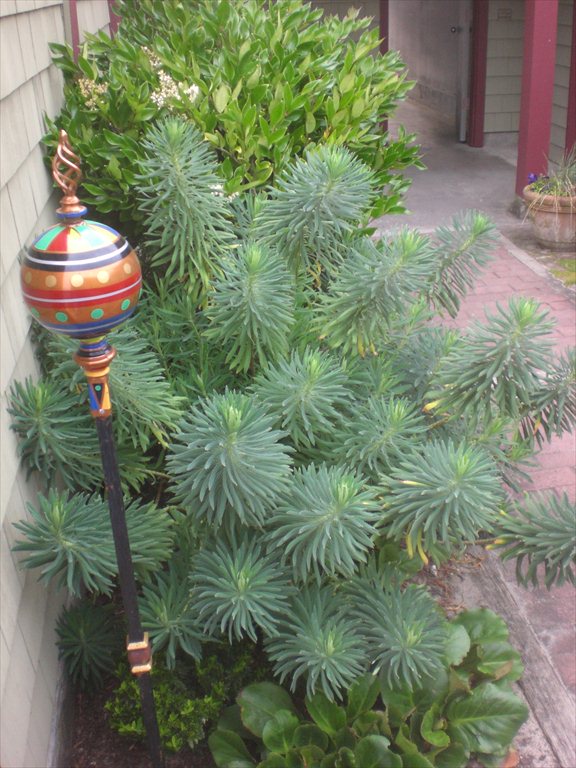 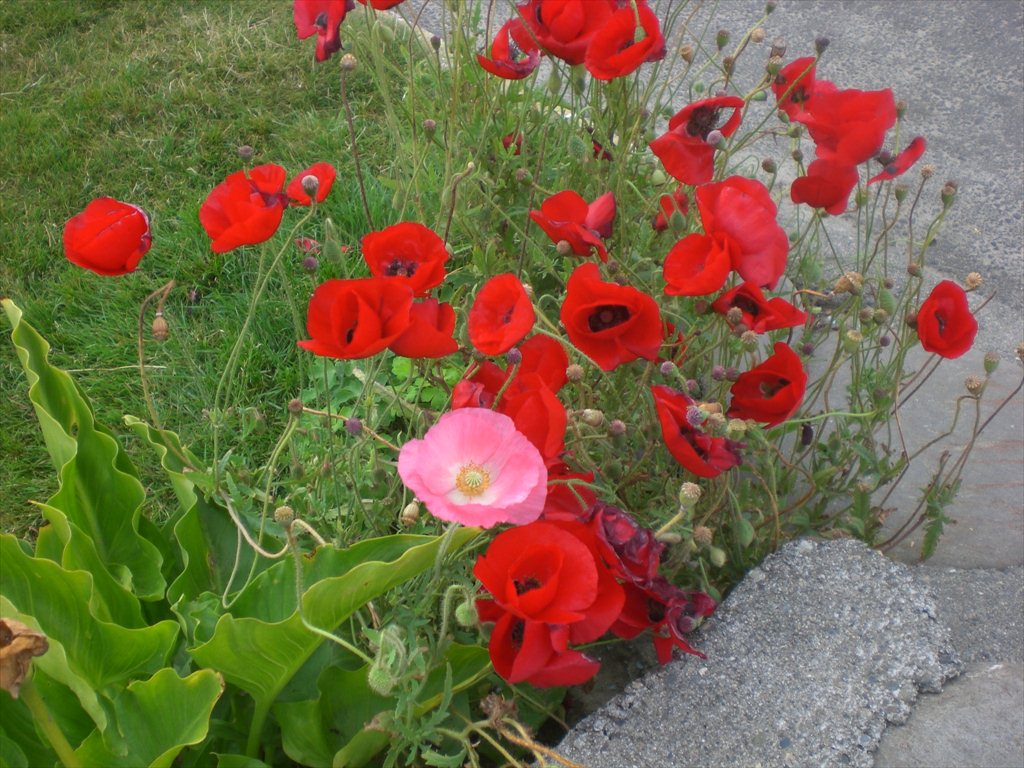 Here’s a look at a well-tended garden featuring perennials and typical plantings, put together by a loving hand: 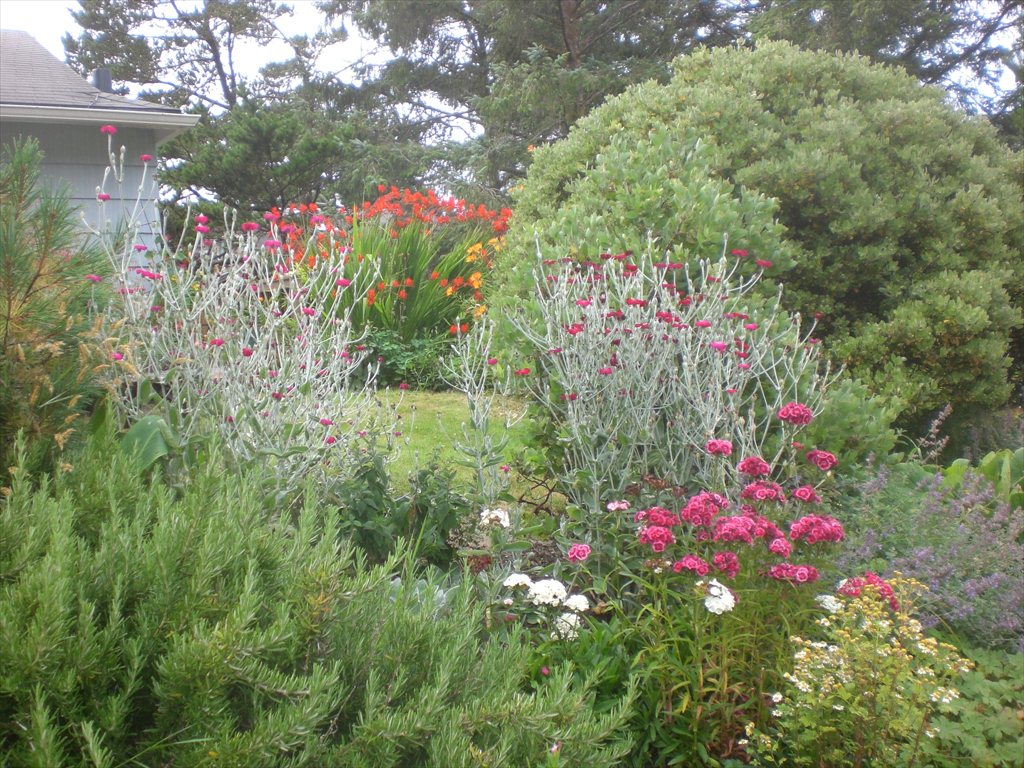 Finally, the journey would always complete itself at the water’s edge. Note the kites flying in the breeze in this picture and then realize at the bottom end of those kites is some dude/dudette on a surfboard, using the wind to take him/her for a ride: 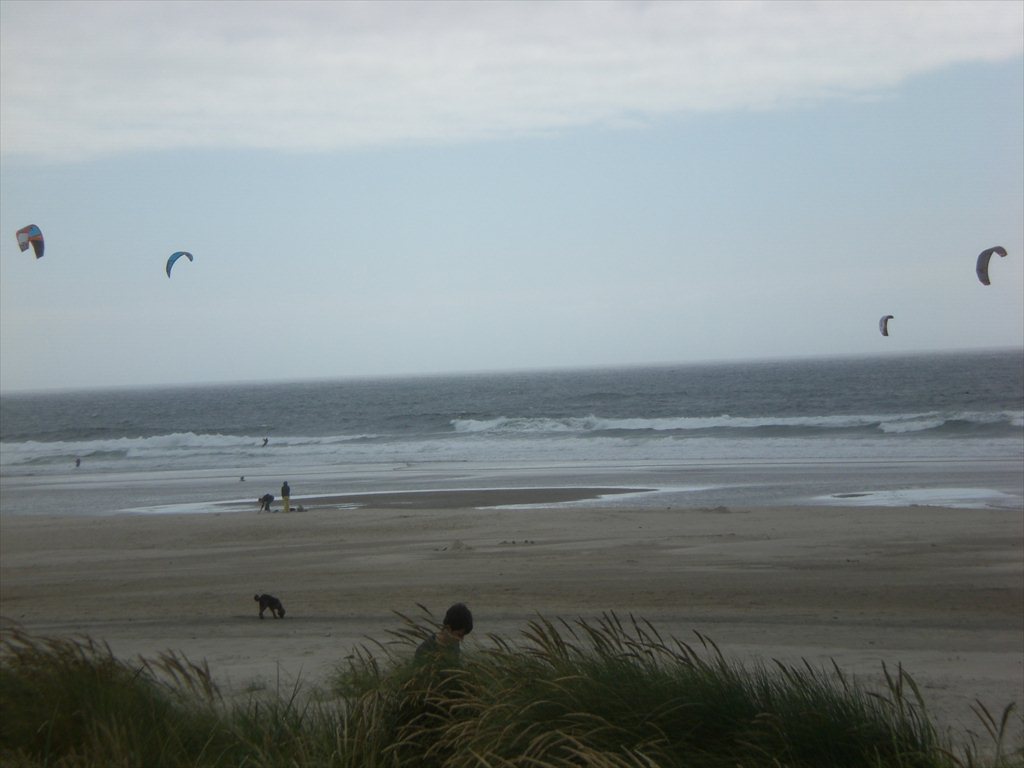 A look around the beach at Manzanita: 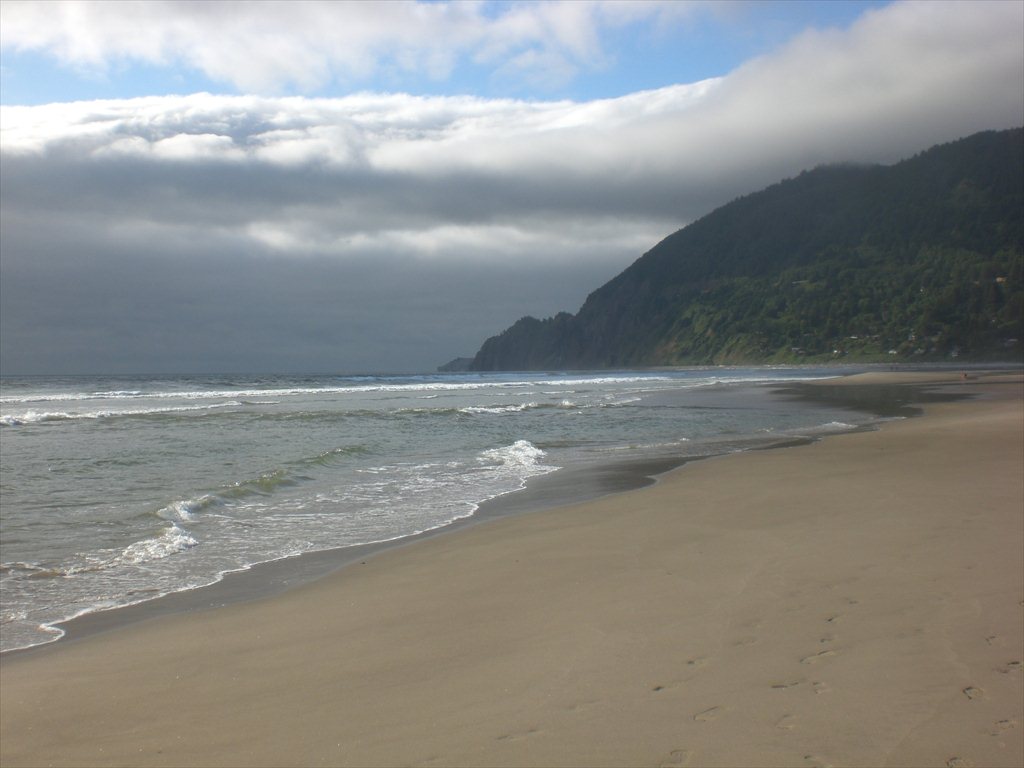 The cliffs at the North End of Manzanita Beach (above) show what the Oregon Coastline is famous for – an ocean butting right up against mountains.

Below, the fog bank referred to at the beginning, still not quite blocking the sun. This is a South West view from one of the many dunes, some of which are 20 feet high also covered with this gorgeous beach grass which waves in the wind like a soft caress. 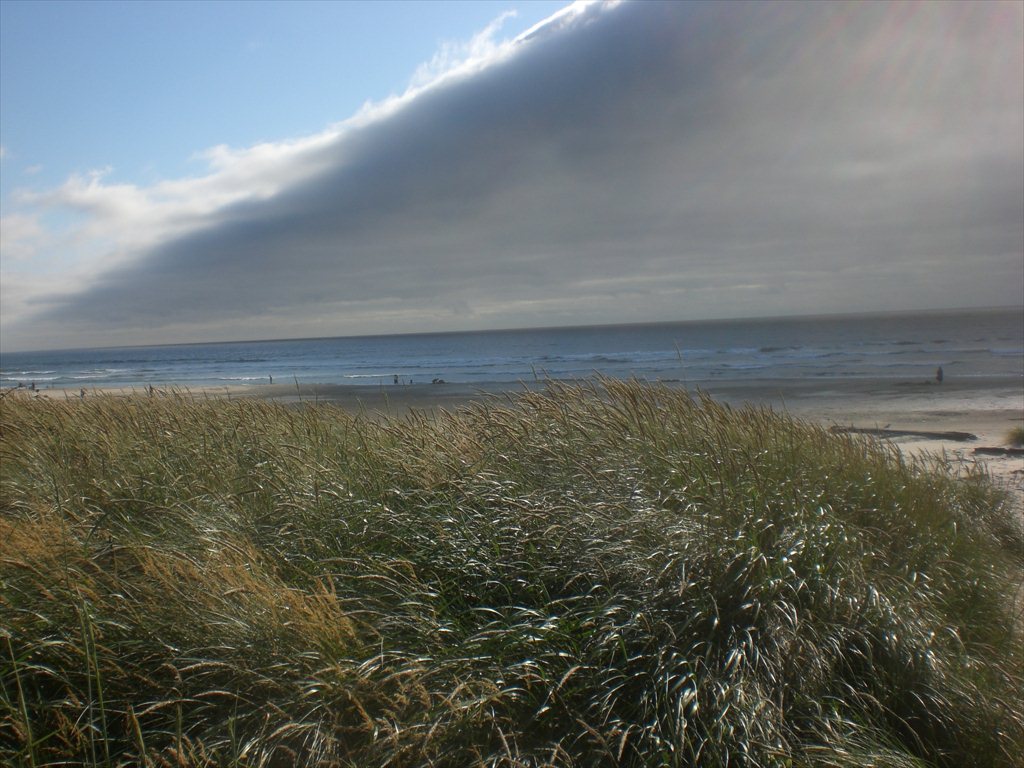 And here is a strictly Southern view, giving us 270 degrees of eye candy: 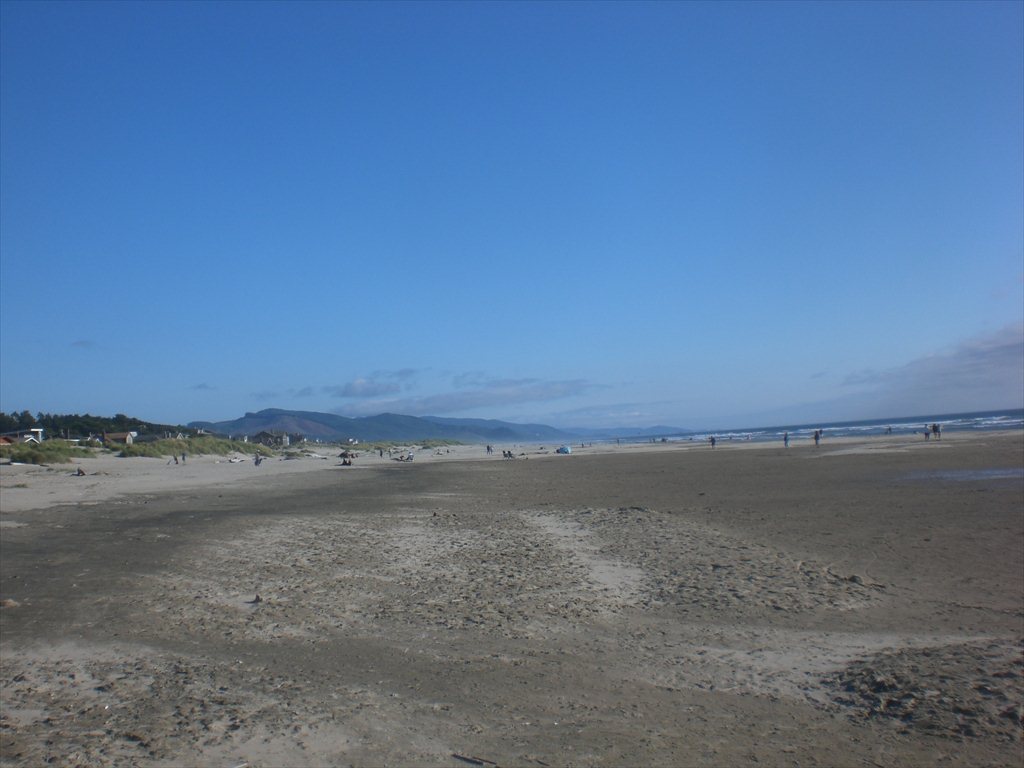 And finally, The Ocean itself – wild, huge and all consuming: 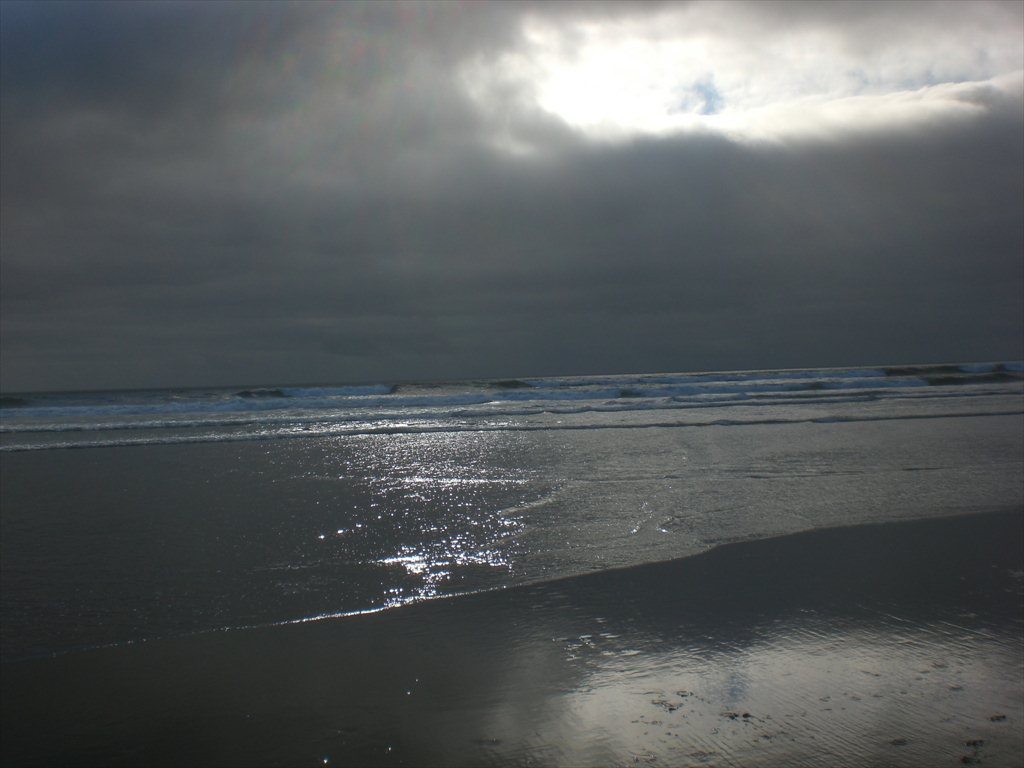 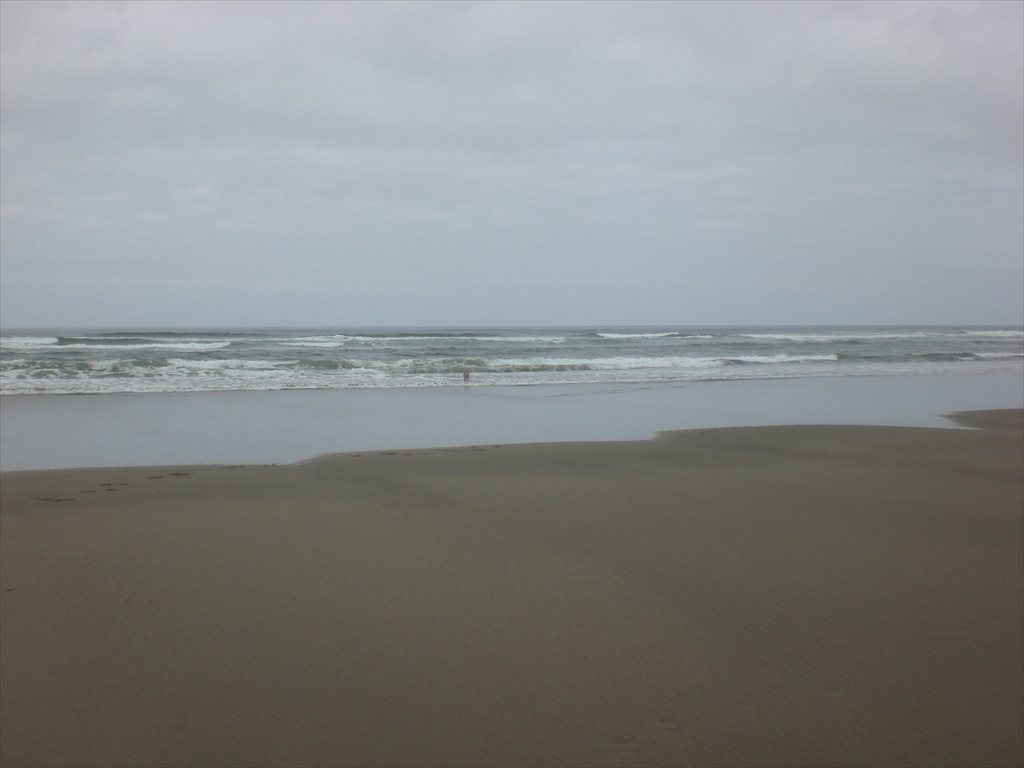 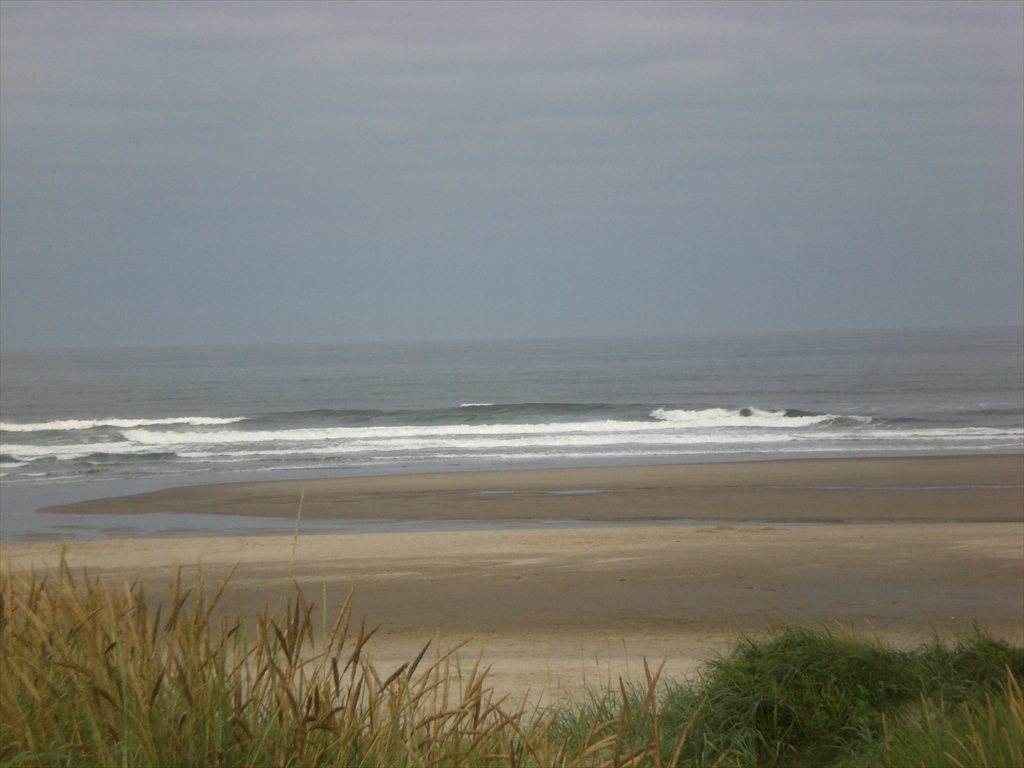