Today are the hours following the Fall Solstice. It is appropriately cold for the occasion, a miserable turn of events if you ask me but one which does carry a sort of miraculous seasonal change even if the season is a rather grim one. I am a devoted follower of Spring and Summer – I would never claim otherwise.

Among my various living spaces, more than one occurred in America’s Great Northwest. It is a tidy spot – cleansed often by an incessant rainfall offering various felt conditions which always occur during this very same turn of seasons, delighting salmon and sticking a dagger into my heart. Like Clint Eastwood said in “The Unforgiven” about killing men, I say the same about working in rain: “It’s a hell of a thing.”

In an undoubtedly presumptuous yet still everlastingly apt  bit of description, I have often used the following phrase to typify what my career in Landscaping has been like: “I have forgotten more about mud than you will ever know.” 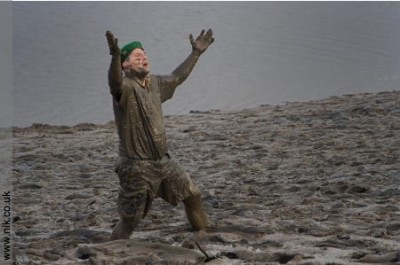 This assumes that  my target audience have not faced the trials offered by landscaping in climates which feature rainfall on a regular basis and the attendant concerns about the very base material my trade specializes in ………………. dirt……….

I’m saying mud is a pain in the butt. My “target audience” in this case, does not include farmers, plumbers, pipe-layers, bulldozer operators and grave diggers all understand me and await more written angst while pre-tasting the beer which is imminent and a necessary coping mechanism.

There are other, more colorful and less mannerly descriptions of these utterly earthy descriptive’s, but I will leave them to the reader’s imagination. These terms all  feature the same wide and imminently hostile variety as are so often used when discussing rain itself – with my same reluctance to use them on an otherwise very consciously “decent” blog. However, in the search for said terms, use all of your imagination, by all means!  😉

An incident of note: This example was early in my career, while working for Cotswold Landscaping in North Vancouver, British Columbia, when I was reassigned over to the “Landscaping Division” of the small company where I had previously plied my 3 years worth of working days as a “Maintenance Specialist” – a nice name for someone who weeds gardens and mows grass. I had helped the business devise an estimate –  my very first estimate in landscaping, a contract we were actually awarded. My Hungarian friend, Alex, a giant of a man with limited Math and English skills, had requested help as well as a need for another able hand in the division, inasmuch as we’d lost a guy who had moved back to England. I was open for a change and it became my initial work in a field which would last another 40 years. It was also my first True Mud experience, slightly uncomfortable yet totally appropriate for what transpired as years rolled on.

The contract was for the perimeter of a public building and consisted primarily of establishing plants in the obvious landscaping spots and installing a large lawn to cover a mounded area to the rear which would double as a playground. I remember being quite excited having successfully intuited and laid out our materials needs and I used Alex’s figures for what we would need concerning labor. I had shopped the plant list, found reasonable soil and compost suppliers and received much praise from the owner for my contribution. I was positively aglow and barely able to contain my enthusiasm for the project. As we entered the project on that first day, the undertaking looked seriously large and somewhat intimidating. In truth, it was over an acre in size, with the large expanse of grass featured prominently, studded by large shade trees and Ornamental’s at interesting intervals. Inasmuch as we were finishing another project  elsewhere, Alex then left me behind to coordinate some bulldozer work which would have the land slightly reconfigured to meet the parameters expressed on our prints.

The bulldozer arrived on a big flatbed trailer and the operator drove right off the trailer onto the ground around us. He scooted forward, stopped and we began discussing the plan. Once apprised, he immediately cranked ‘r up and we began the job of moving dirt from here to there. Things went swimmingly as we began scraping the top of the earth from the perimeter and relocating it in piles next to the mounded area, which need about a foot of raising. For those who wonder, raising a large mound by a foot required the resettling of nearly 400 yards of dirt – around 30 truck loads in everyday parlance. In other words – it’s a bunch of dirt. Here, thanks to a picture provided by Graders.com, is what it looks like at the business end of bull-dozing dirt:

As we worked through the morning, it began coming together. Slowly the dirt accumulated from the scraping, we made some “elevation shots” with our construction level and found that we had arrived at the time for spreading the dirt up onto the mound to complete this phase of the project. As the operator pushed his first load of soil upwards, dropping it in place as he traveled over this overburden, he stopped and called me over, to recollect with me the aim and general parameters we had established.

He was waiting for me as well to insert a stick into the ground, the top of which would be the “reveal” which gave the finished grade and which he could work to. I had studded a few of these around the mound in increasingly higher increments and wrapped the tops of the stakes with a brilliant day-glow pink ribbon. As he sat and I approached, I climbed up onto the pads of his tracks and we began speaking. As we spoke, standing there, I began to feel this crazy sort of vertigo, a creeping sensation that something was happening around me which I could not really lay a mental finger on. We both stopped talking because he felt the same thing. Suddenly, we realized what it was – we were sinking!! – straight down.

“Dammit, we’re sinking!”, he yelled and he quickly started the machine. I hopped off and he tried reversing the ‘dozer but found out he had sunk far enough that all that got accomplished was watching the pads eat into the virtual wall formed by the sinking and going even lower. Moving forward was the same, but worse. He seemed to be diving into the very same trouble, just quicker. As he sat there, his motor idling, we both had the realization that the soil under the few feet of a dried, crusted layer we were on top of was still extremely “fresh” mud, not yet completely percolated and not firm whatsoever. Not even close. Here – a different machine type, but a similar result: 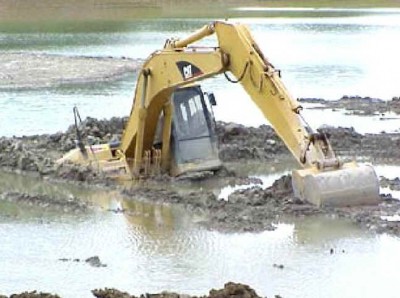 He sat in the cabin chair as it slowly sank, inch by slow inch, right in front of our eyes. He even leaped out after the sides of the tracks got covered over with the sliding black ooze emanating as the ‘dozer displaced it, covering over the tracks and showing merely the seat itself protruding out of the ground. Even the blade disappeared. Eventually, it never got completely covered over although the seat was the only remaining artifact from our origins. It sat up out of the mud in the end, like this yellow beacon to a grateful machine owner who did not relish fishing blind for the thing later, when rescue arrived.

We shared a sort of secret smile in a mutually wry understanding of the plain absurdity of it all, and yet, it was nothing he hadn’t seen before. He immediately called his office, a huge excavator was dispatched on the same “low bed” trailer and, within an hour, we were hooked up and pulling the machine out of the brown dirt jello. Once cleared, he hopped in and drove it right out. He spent another hour cleaning it off by hose and we then spoke of the timing for our next effort. Nor did we attempt climbing the wall of mud again. It became a manual function of unending labor.

The eventual disposition of wet dirt – otherwise known as “Mud” – is this: The tiny grains which make up soil are any combination of sand, silt and the even finer products which make up “clay”. Organic materials round out the composition of any soil and can often work to slow down the draining of water from it all. Tree roots as well as tiny “thallus” – or “Mycelium” – wide-ranging fungal rooting systems of mushroom roots along with wood particles can take far longer to drain.

This soil was extremely organic, having been the floor of a dense forest for 25,000 years or so, complete with under-pushed ferns and the total of the afore-mentioned range of organic materials. A “cleaner” soil, consisting of clays, sands and silts, or even a sandy loam, will drain well over time. The tinier the particles of any soil, the longer it will take for this to occur. But they all eventually allow the water through and then stand firm for travel. In this case, it took nearly two weeks for it to drain sufficiently for us to spread soil with yet another wonder of technology – the “Swamp Cat” – a bulldozer with 3 foot wide pads, displacing about 2 pounds per square inch. It’s wide platform deterred it from sinking and it’s footprint was so wide, nearly any semi-permanent material would be sufficient, short of literal water. 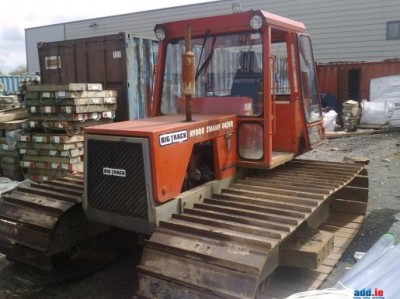 We wrapped up the project on time and within budget. Our owner was delighted, especially after the incident of our very first day, which no doubt concerned everyone as if it were an omen of some type. Future incidents of my own personal Mud Men Adventure Series are every bit as unusual as I also discovered cures for problems such as the one presented in this post – cures which allowed us to be incredibly proactive and still successful in a trade rife with the muddy environments such a climate can present.