In the spirit of continuity, I’m opting for yet another tale of mud and woe describing the constant battle against this unforeseen mistake of Creation which has comprised probably 40% of my landscaping career.

But this post takes a more philosophical slant, which I feel is in order before I describe yet another unfairly vicious attack of the Mud Monster – tales of which I have many, many.  I herein hope to provide us all with the various caveats which place us in life’s ultimately “most miserable moments at work”, but which become secondary in a completely illogical and weird twist on human perceptions. If this turns out to not be believable, I cannot blame anyone for that assumption. All I have is what I own.

Note: A Picture of Portland’s Waterfront Park, below, which does not at all resemble the terrain which it consisted of at first. 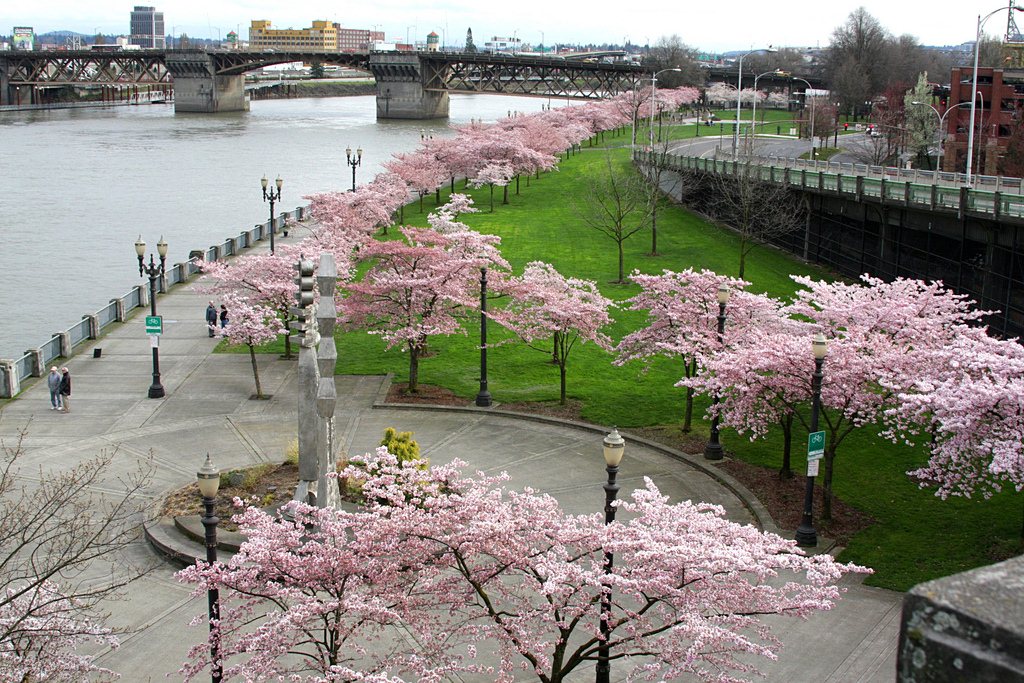 Let me insert at this time something which has gone unspoken. As much as I have detested rainy days which stretched for months – and who would not? – and as grueling as some of those work days were, there remains an optimism in someone who works with dirt and landscape planning and installation which tends to factor in at a spiritual level. Sure, you’ll hear men complaining endlessly about it all. And certainly it motivates many of them towards other employment. This is inarguable as it can be.

But, as a very qualified expert on these matters, I can assure anyone that the fruits and pleasures as the goals become increasingly apparent are resplendent with the sense of accomplishment. I can think of very few trades or practices outside of waging war where so much is arrayed against so few. Is this “over the top”? – I honestly don’t think so. Believe me, the “felt experience” at the working end of a shovel – the constancy of donning rain gear and the extreme interest in the technological  improvements in such apparatii – the grimness of those early, sometimes pre-Sunrise hour mornings when the temperature is barely above freezing – when one faces 8 hours of climbing dreadful inclines in torrential or semi-torrential, all day rain, packing rocks, plants or sod – these things are the litany of drear. One’s heart can sink as he opens his house door, prepared for work, and the rain cascades down, drenching one as he negotiates the walk from his house to his truck.

What, in all this, can be remotely considered good? 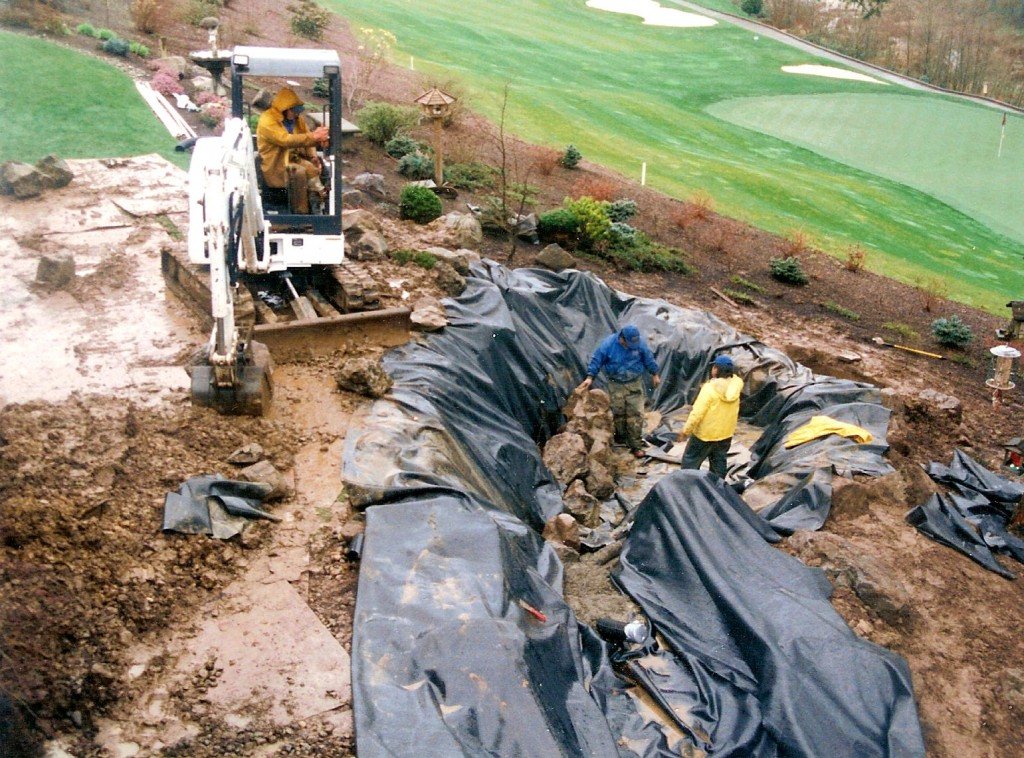 The only answer I have is the stubborn insistence that, aside from becoming fully invested in a career which produces such regular disappointing climatic events and which apparently allows so few alternatives, we have the Final Product as goal and the penultimate reward. That we labor for someone else is nearly secondary, but even that relationship has a promise which is pretty ‘off the charts’ as well, in terms of pure respect and the appreciation of what, indeed, gets accomplished.

Each rainy, miserable and simply awful day is counteracted by the amazing relief of actually seeing it all the way through. We plod home, drenched and sore, our muscles aching from the typically hard landscaping tasks which were exponentially made worse by a persistent rainfall. As we sweated inside our modern, up-to-date rain gear, we had the completely dreadful realization, 3 hours into the work, that we were getting as wet as we would have gotten has we eschewed the rain protection!

This is true: I had guys working for me in Vancouver who would walk to the job without rain protection and who worked entire days without even bothering with it. As ‘The Dude’ from The Big Lebowski might say: “Moisture abides”. 😉 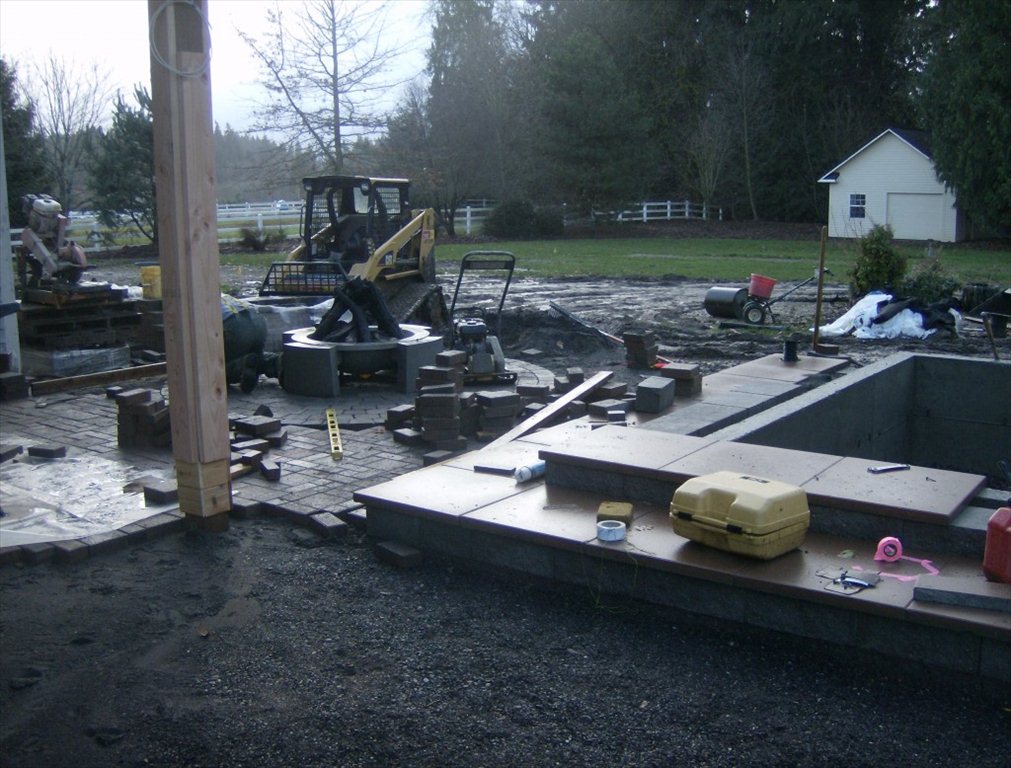 OK – Enough Already……..Then there is this

In North America, where we have abundant rain, we so often also feature milder Winter temperatures. In one of the worst-ever Winters for rain in Vancouver, BC, I recall not missing a single day of work. Not a one. There was also very close to 100% attendance at work for those of us on those crews.

Where we have abundant rain, we also feature incredibly productive plantings. It is our onus – implementing the plans proscribed by designers – to present them in the best possible foregrounds and backdrops. One learns, in short, to use the rain as an asset. We can indeed attain this, ironically,  for purposes of, say, compaction under hard surfaces which require a 12% moisture level for the ultimate in compaction. Needless to say, pretty much the last thing we face worrying about is to remember to “water the new plants”. The assurances of planting success are beneficial in a strictly business sense as well. In Reno, many landscapers were regular “re-visitors” to nurseries, bringing in plants which were obviously under-watered and who had croaked as a result. I can honestly say I have gone for years without returning one dead plant. I’ve had nursery owners who were actually relieved I showed up with one and I’m being serious. “I thought we’d never see you again! Heck, I know all about (so-and-so’s) family after all his visits returning dead trees!”

Where we have abundant rain, the air is so ozone- and oxygen-rich it cannot be described accurately. One can go to work sick and come home well, with air this pure, and I am not exaggerating. Our endorphins, always a factor for those who work outdoors, ramp upwards, creating pleasure where – supposedly – none should exist. The truly grimmest moments in climatic disgust can produce nearly ineffable moments of clarity and repose. One feels a rare pleasure in his existence at  incredibly unlikely times. I am being completely serious here: The Mystery of Life merely deepens as we assess with our conscious mind any remote intelligence which could inform us as to why on Earth we are not totally and irrevocably miserable. 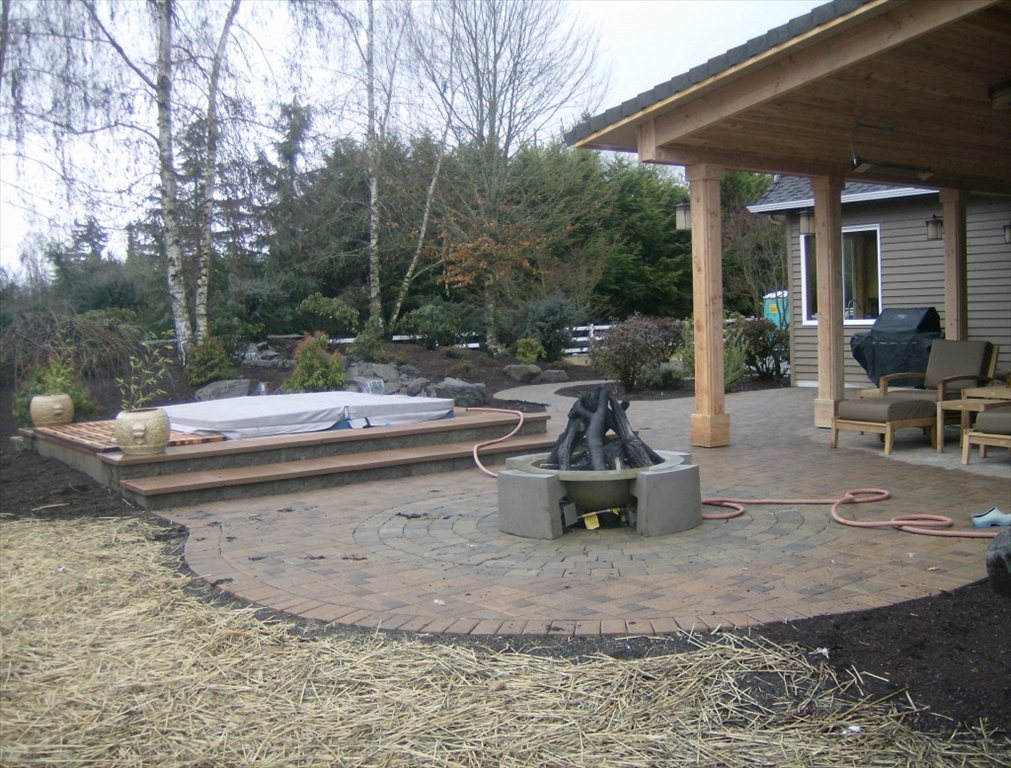 I admit working for a living can perform all these spiritual tasks for anyone. Anyone at all. Working, for Americans, provides imminent self-worth – a prize for anyone – and rightfully so.

But I can aver right now that the physical rewards of maintaining strength, using it, contributing in an open atmosphere about solving problems, acting proactively in doing just that are but a few of the incredibly strange rewards one can grab while landscaping “where no man dares to trod”.

Next, I describe the effects of approaching a hole in the ground, 50 feet by 30 feet in circumference, a full 20 feet deep – completely filled with long-sitting and somewhat rancid water – and hearing a man advise us that he needs a brick pavement structure on top of this area by the end of the week.

3 thoughts on “True Mud – Part Troix! – A Note On Landscaping As A Career”