“Pavers”, in the sense we refer to here are compressed concrete bricks, perfectly formed to interlock initmately, forming a non-moveable structurally road strength surface. The “compression” comes from the manufacturing process, where the paver forms are filled, then shaken to void out air holes and to better distribute the cement itself. They end up being somewhere in the vicinity of 8,500 PSI (pounds per square inch). To get an idea of how hard that is, your standard concrete walkway downtown is about 4,500 PSI. A patio out back in your yard will usually be in the vicinity of 3,500 PSI. Thus, these are harder than ‘normal’ cement products. They are being used in many newer applications, including city streets. 5 million square feet of the Honk Kong Airport’s entire runway and general tarmac is composed of these little beggars, as well. 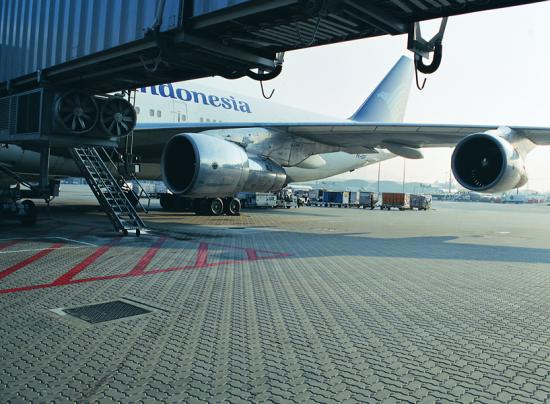 The concern in Hong Kong dealt with the massive rains of the Monsoon Season and the tendency to flood. Brick pavers offered a drainage solution which intrigued the planners, who still produced plans containing ample numbers of catch basins to conduct water throughout the airport’s tarmac. Later tests revealed the incredible infiltration of water between the actual cracks of the pavers themselves, producing very nearly zero work for the planned catchments.

Pavers, simply by their segmented nature, allow water to pass directly down between one another, as this picture shows in more detail. 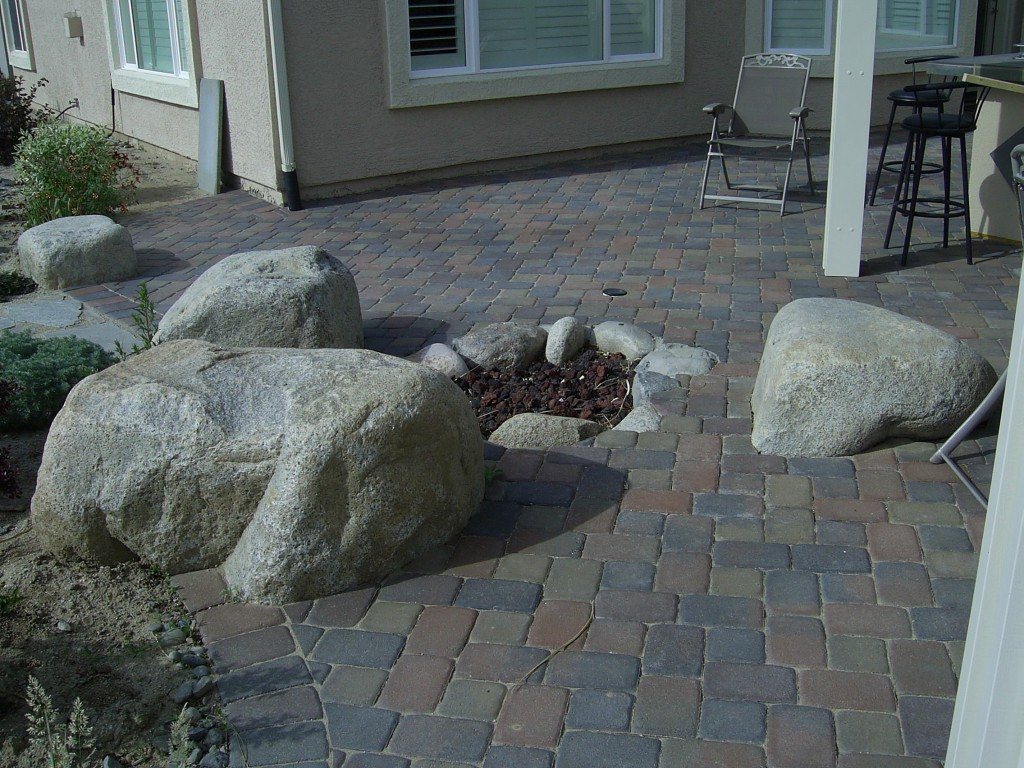 Another recommendation they carry with them is the fact that they are somewhat flexible. In this, I refer to the component factor: it takes a lot of brick pavers to contribute to a driveway. Whereas a cement driveway will develop cracks atop shifting bases, or can collect water underneath and thus heave, where the concrete structure will crack and split and then deteriorate further with time, pavers will heave just like the cement, but will not have some monolithic break. They will ride the heave and stay intact. Thus freezing and cracking may well be the least of worries. The actual fact is, those who prepare the base are the stars of this particular show. Proper preparation below any surface yields much less trouble, later. 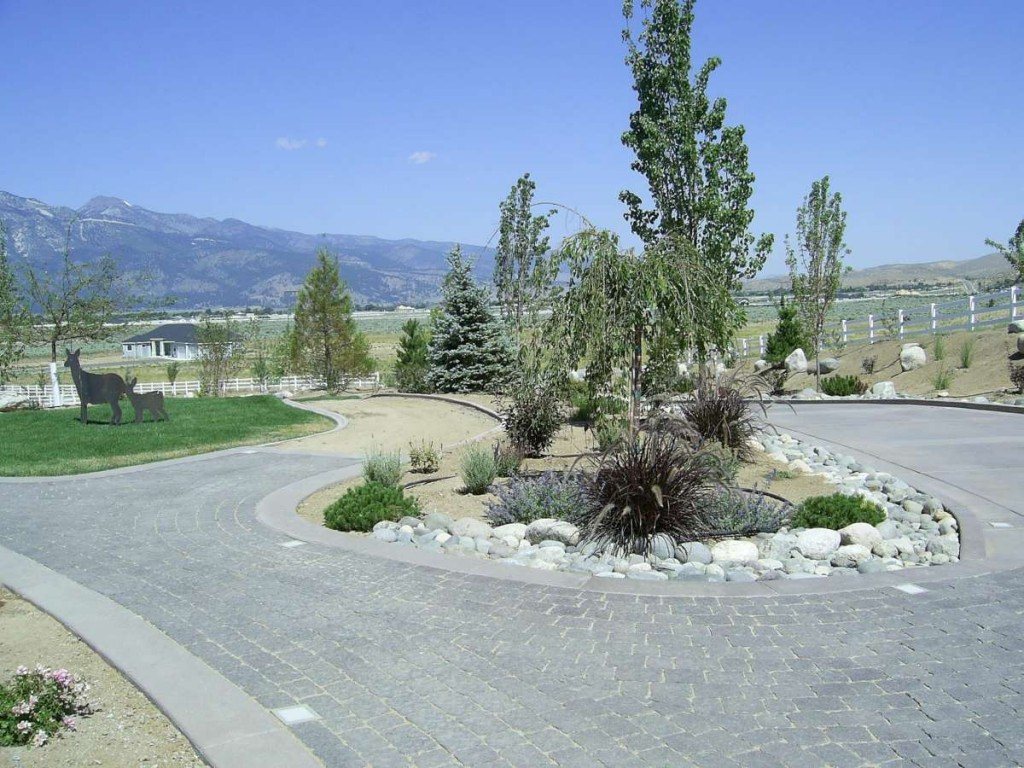 Under any surface, cement, asphalt, or brick pavers there needs to be a compacted base consisting of some sort of compactable material. Typically a mix of small rocks and “fines” from the same rock created at quarries do the trick. The fines do what we indicated above with the forming of pavers in the mold: they fill in totally and thus ensure, upon being squished with some titanic and compressing machine, that the subbase is going absolutely nowhere. When covered, there should be no voids to collect water where freezing can affect the ultimate size and cause breaks or heaving. A compacted base would also solve a lot of cement problems regarding breakage and deterioration but it seems not all contractors take the time for this hard and time-comsuming work. 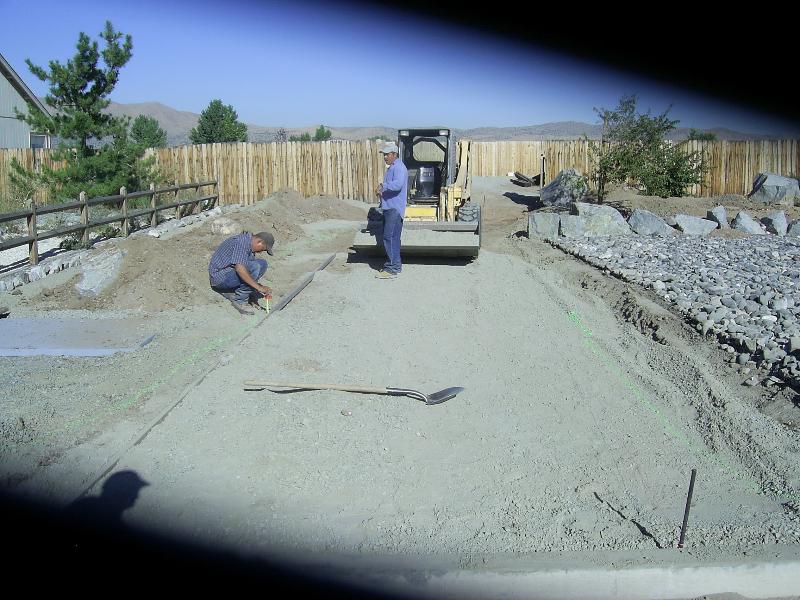 Depending on the soils underneath, the base material should be at least 6 inches thick for drivweways and 4 inches for patios and walkways. In the absence of base material, or Class II Base as we call it, washed sand can actually be used as a base material. 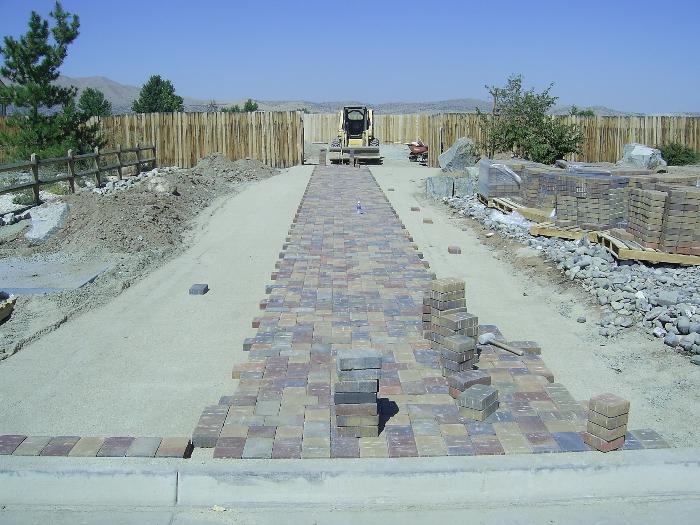 In any event, for truly muddy or expansive type soils, one should overexcavate appropriately and add this completely new material. I once had a project, in Vancouver, B.C. where we were scheduled to install pavers aside a parking garage. The only problem was, there was this hole from earlier excavations about 12 feet deep and some 50 feet wide and it was full of water. This was exactly where the pavers were supposed to go.

I backed a line of trucks holding washed sand up and dumped them, pushing them in, finally, with my trusty Bobcat, bit by bit, allowing the water to escape from the rear of the hole, and succeeded in filling the hole in a day. Two days later, we were compacting and constructing and, 5 days later, we had made ourselves a brick fire lane, 20 feet wide, coursing over this former hole. It was actually sort of amazing, really, but I swear, that drive is at nearly the same level it was when we constructed it, today, some 22 years later. Here’s Nature’s bottom line: Nothing compacts like water!

For pavers, an extra step is typical at the end of the compaction drama: a one inch layer of sand is put in place at the exact level one desires the pavers to go. Eventually, this sand bed will allow a bit of movement as the pavers get compacted into place and grouted with yet more, and possibly other decorative, color coordinated, sand. What this achieves is some allowance for error, as well. Artists with a plate compactor can literally change a grade where necessary, by adding water and worrying a hump into submission by whacking it until it conforms. While this sounds inexact, the best operators can achieve a perfect grade. It’s what they are paid to do. 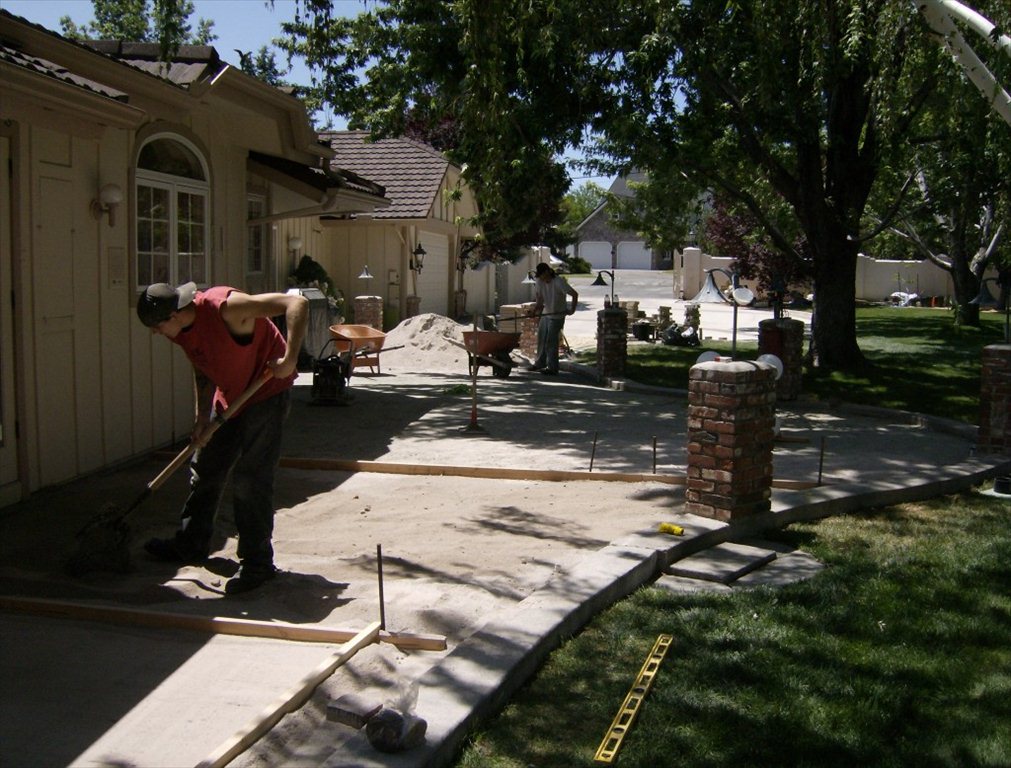 The job is almost done. I am being serious. There is some darn hard work, toting pavers over for placement and all, but establishing the base is always the big achievement. By the time your sand is screeded (levelled into place), laying the pavers is good old brainless work, in most cases. I advocate hiring the high school student for this phase, lol. (You know that saying, “Hire the high school student….while they still know everything?” oops, sorry, honey). I could not resist, sorry……now, where were we?

Establishing a laying pattern is mental. There are any numbers of patterns available, from Herringbone ones to Running Bond patterns and some extoic ones as well. Just the same, laying them becomes easier once the pattern is established and repitition becomes the norm. At this stage one fills in the blank area with bricks. 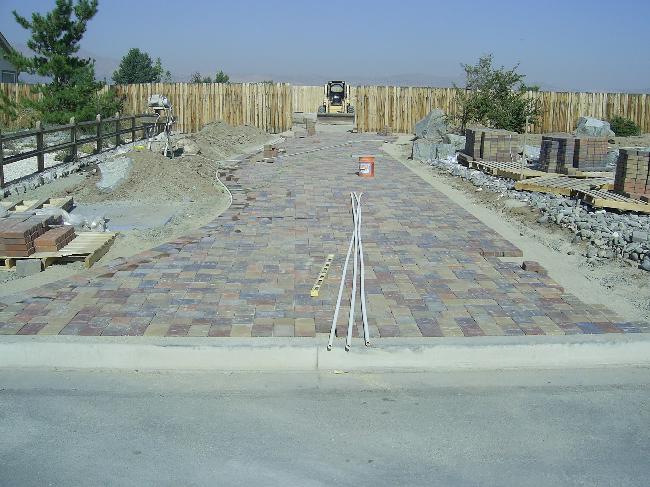 Finishing involves a few things: edges and retaining systems, grouting the pavers with sand and the final compaction. There is also sealing which I will also address elsewhere. 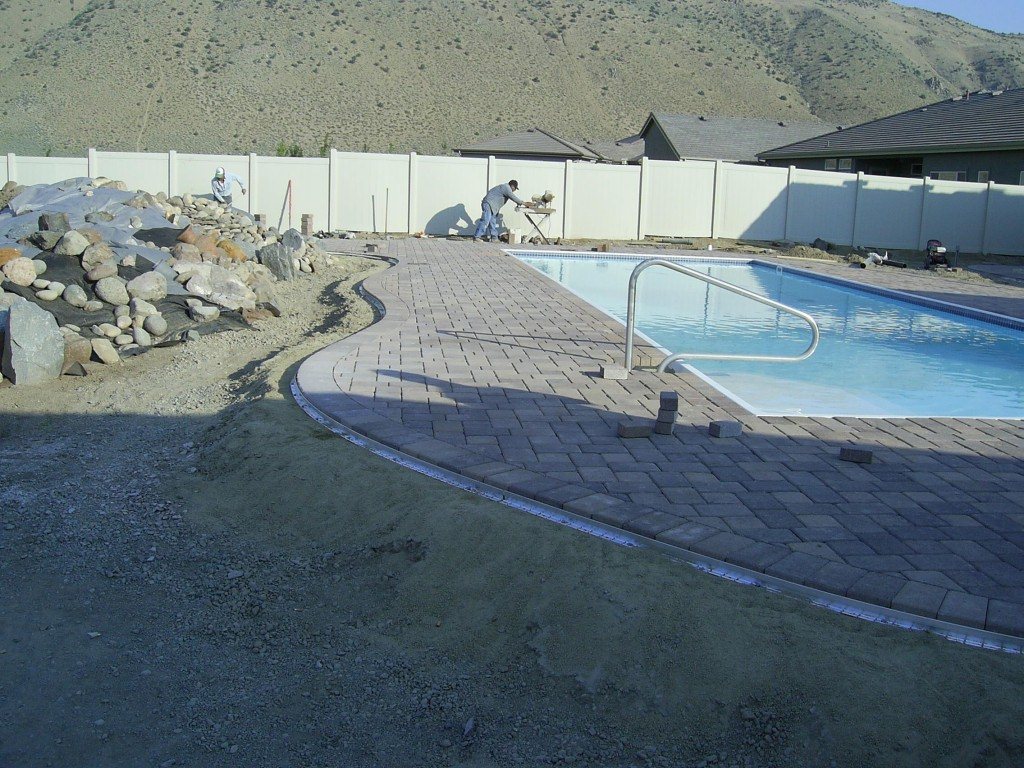 Edges and restraining: If curved, the edges of any paver edifice will require cutting. Many people use the “guillotine” method of pressing two sharp edges manually, thus cleaving the brick. I have seen projects done this way which worked well. Nevertheless, I always advocate cutting all pavers with a brick saw, using a diamond blade and water, thus getting a crystal clean cut at exactly the edge one desires. It just looks more professional, to me. Once in place, I restrain my bricks with either plastic or aluminum edging, complete with holes for knocking down some nice 8-10″ spikes and holding it tightly in place. The edges of all component structures are always the weak point, but with edge restraints, one can withstand tires and accidents alot better.

Grouting with sand: This implies spreading a layer of sand over the entire paver area, then sweeping and watering the sand into place inside the cracks of the pavers themselves. One also cleans when finishing with water. I like to compact the pavers one final time with a thin coat of sand over the bricks. The sand “lubricates” the passage of the compactor and the compaction process shakes the sand into those cracks. Then is when I typically wash, finishing the grout process and the project itself. 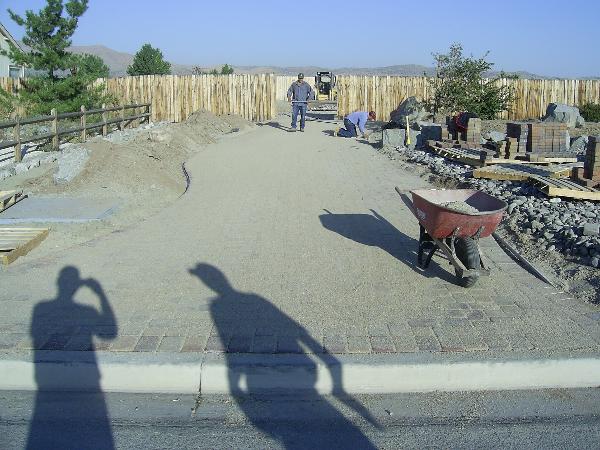 Essentially, that’s it. One can expect a lifetime’s worth of satisfaction from this stuff. Indeed, one may well expect generations to enjoy the fruits of this labor. Modern bricks are replacing city streets in many cities, especially those who experience rain problems, like Seattle, Portland or Vancouver, B.C. They add wonderfully to the resale value of a home, even aside from looking as good as anything out there can look. I will deal with the more artistic values of brick pavers elsewhere, but the color combinations, laying patterns and bricks themselves are mind boggling in their diversity and possibilities. They are a huge step forward in landscape technology and offer yet another wondrous and durable possibility for outdoor pleasure. 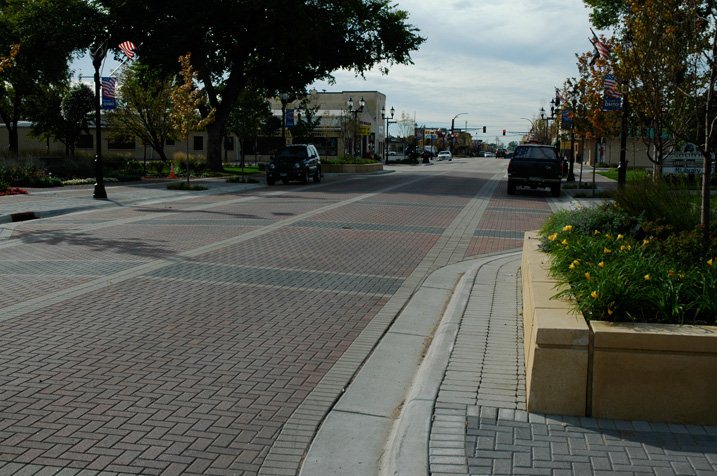 1 thought on “Brick Pavers As A Product and Installation Issues”