A desert-like environment like Reno’s impels a designer to use rocks and mulches to draw attention away from how garden-hostile such a waterless existence can be. Points of interest then become something other than those plants, lawns and general features of wetter climate zones. But it also allows some experimentation with color and pathway features.

In the picture above, we see a small sitting area essentially removing the need for a great many plants but still congruent with enjoying the place and looking OK. (A note, the benches were not our idea). The pathway leading to the “patio” of similar materials is simple and welcoming. Actually, this particular material courses throughout this entire landscape, allowing traffic between some disparate elements.

Incidentally, with drip irrigation, plants can do fine. Don’t let me dissaude anyone from using them, lol. Especially perennials, my particular faves. 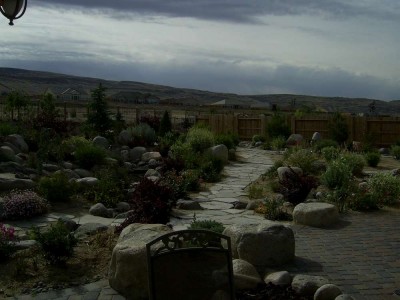 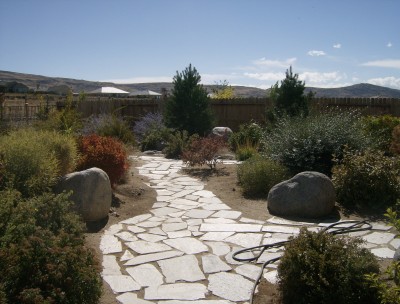 These two are of the same place, obviously taken on different days. The owner wanted a substantial pathway, needless to say. It is typically a bit wider than we were used to.

Natural slabs make an informal look, somewhere between the informality of gravel and the strict formality of cement or pavers. Some are also easier than others to make work. To be completely honest, the walkway above was not one of my favorites, although it fulfills its function well. We were forced to use smaller slabs owing to market conditions at the time. But – hey – he liked it! He paid! 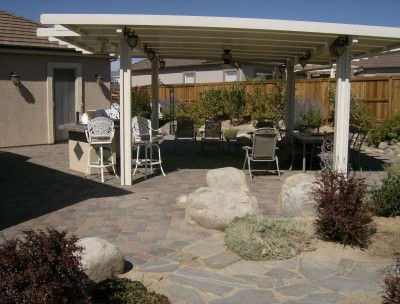 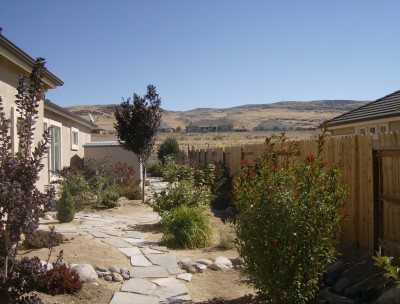 The little creek beds are actually funnels for the odd downpour, leading from the gutters and down spouts into a dry creek which actually functions, taking the water out front to the street. We make these little bridges all the time, lol. They are actually pretty fun.

This one is built around a very adapted water feature which we lowered and made less intimidating. It was owned by an ex NBA ballplayer who went to school where my parents both graduated, Eastern Illinois and had a cool basketball court where my crew lost badly to their boss.  That needed mentioning. lol. 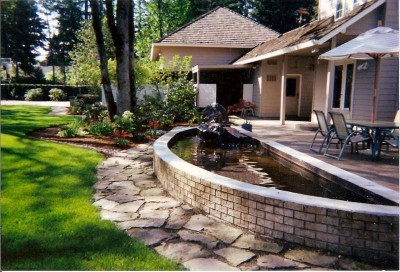