Owensboro, Kentucky is an otherwise fairly sleepy burg of around 57,000 people situated on the Ohio River. Its population actually sees it as the 4th largest town in the state so it has a bit of swag simply from being its size. For long years during its past, the cultivation and auction sales of tobacco was an absolute stalwart economic engine, although manufacturing – a huge GE plant – and gas transmission (Texas Gas transmission HQ) played major roles in the local economy. Finally, there is the very tell-tale odor of bourbon whiskey as it cooks and then ferments for years in the big barrels in those huge warehouses at a good number of distilleries nearby. Often, the aroma pervades the town, giving it a sort of sinfully acrid but still-delicious singularity.

Tobacco and whiskey – now there’s a great intro to a pretty cool town. 😉 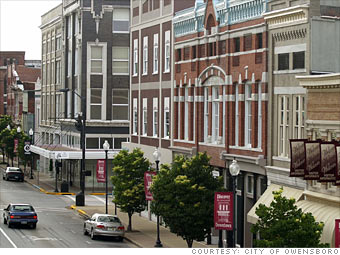 It actually gets better, in a way. Barbecue aficionado’s know where I’m going with this. The first-ever ‘World Barbecue Cook-off’s’ were held in Owensboro, where barbecue sits atop the world rankings as a passionate and highly successful local product which made its fame outside in the larger world. You could call it a Hall Of Fame entrant into the wide world  of  barbecued foodstuffs. You’d be very right, too.

In 2000, Sports Illustrated called Owensboro “The Best Sports Town in Kentucky”. This represents winning out over some severe competition, especially when you consider Louisville’s deep historical base in sports – Louisville Slugger baseball bats, the first Professional Baseball Team in what was the new Major Leagues of baseball, the birthplace and opening scenes of Muhammed Ali’s life story and home of the University of Louisville. And Lexington, of course, has the University of Kentucky, widely regarded as one of the primary “Blue Blood Programs” of college basketball.

So Owensboro must come by its honors honestly, you would think. Well, they do, I happen to know. From just my upbringing alone, I remember days of hanging out with eventual noteworthy people who were nothing but pals and mutual miscreants in many off beat, sometimes semi-legal adventures. We had the anarchistic urges of those days and a reckless, devil-may-care enthusiasm that determinedly made life fun and a little risky, like pretty much all teenaged boys and girls. Those who – like me – played more than one sport, saw the darkness of many evenings close in while still at school, practicing a sport. Free time was a huge and awesome luxury, usually taking place after games at dances and/or parties where smiles occurred at light speed.

Another thing: Owensboro, Kentucky is most primarily a family town – a fabulous place for kids to grow up in and a town who has paid attention to their sporting heroes with a patience and an understanding of their ages and even of their mistakes with forbearance and pride. The pace is ordered, the limits well-defined and manners take a supreme place in the assessment of an admired person. I always felt I was taught tolerance and some patience at a very good school, under excellent teachers who knew more about the outside world than I did at Owensboro Senior High School. You could do a lot worse than growing up in Owensboro.

Last Friday, I took a trip down to help commemorate Owensboro High School’s “Night of Champions” – a celebration of the teams who have won 28 State Championships in all the various sports while representing Owensboro Senior High School. The oldest historical school in town, Senior High has won more baseball state championships than any school in Kentucky. Ironically, I played on the very first baseball State Championship team. Needless to say, since that time in 1964, Owensboro has earned a fairly stunning place in terms of respect in the state. The team won another 6 State Championships following our breakthrough season, including a completely dominant bunch who won consecutively in 1977 and 1978. 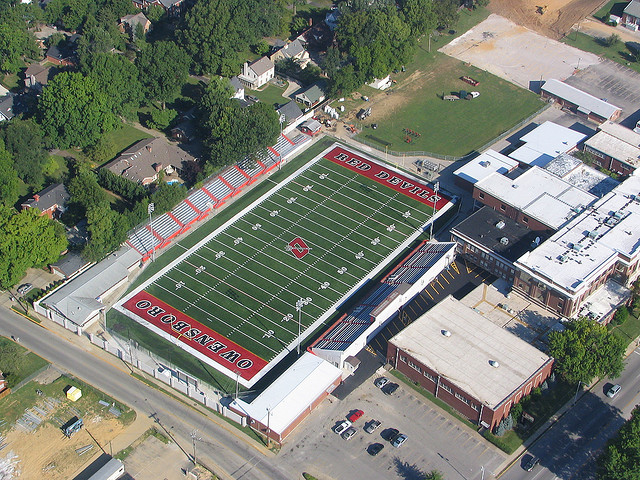 (By the way – Separating the town itself from the smaller view – my old school – reveals other local teams, such as Owensboro Catholic High School, Daviess County High School and Apollo High School, all of whom have won other state championships. The Catholic school is a literal girl’s softball power having won repeated championships, while Daviess County seems to produce track and cross country athletes by the scores. The there is Apollo, the “new school”, who produced NBA star Rex Chapman and a state basketball championship.)

The town also produced any wild number of luminaries from my old friend Darryl Waltrip and a billion NASCAR studs to Rex and Wayne Chapman to a Pulitzer Prize winner and Hugo and Edgar award winners.

Needless to say, the evening was just terrific. We joined a tour held earlier in the day composed of guys and gals who wanted an update, having lived elsewhere, such as myself for all those long years. They ran the event like a Swiss watch, it was wonderful – mixing with these other folks had an element of absolute joy to it. What’s better than approaching a total stranger, introducing yourself and asking: “What state championship were you a part of?” Naturally, most of us were known quantities, but even that wasn’t guaranteed.

The highlight of my evening came when Coach Jack Hicks arrived, in tow with his various nieces. There was a wonderful cafeteria-delivered catering service, consisting of just those barbecued items spoken of above – this time some chopped mutton I can still taste as I type. As the various folks huddled randomly, sitting with old friends or meeting new ones and finding out the coolest facts about the games we played, I spent some ample and fascinating time with Jack, who was besieged by random visitors. I suppose that’s fitting for the guy who got Owensboro baseball back up on its feet, kicking and screaming nationwide, and who won 4 of those state championships. In fact, I have to assess my greatest joys as seeing ex coaches, from Larry Moore (2 state football championships) to Gerald Poynter, the complex and biggest-hearted coach I ever played for (football) who missed his State Title by a hair back when there was no divisional separation, losing a tough game to Louisville Flaget.

It was a marvelous night where I came with a camera which had no memory card. Unbelievable. I therefore won a state championship for being Absolutely Dumb. And no one is close!

However, I am connected!

I’ll post pictures from Jack’s niece who was snapping away madly, once we connect.

My bottom line here? I have always been inordinately proud of my home town. There was always something about Owensboro which associated one with at least a peripheral notion of “class”. Of course, Owensboro has its small-town provincialisms and the weird, “Blue Velvet” sorts of evil you could see if you looked hard enough. There were some scary dudes around back when I was growing up, back in the day when fighting was sort of de rigeur as a rite of passage for some boys.

I always felt excellent about wearing the Owensboro High School colors. I still do and I am delighted to be a part of something quite special.