I’m pretty sure Winter is sometimes as forgetful as I am. I’m knocking on wood as I type this, but honestly, it is plainly deep into March and – I can’t put this any other way – Spring has officially sprung. What was most remarkable about this 2012 edition by far is in the way it sort of settled in back in January. Seriously, I am positive it was the most gentle January and February on record, leading to this glorious pass in which we now find ourselves. If Climate Change means this, then I’m darned if I can find the downside from a strictly Human Comfort perspective. Just like when I loved the standard average paradisaical weather in Santa Cruz, California, I’ve awakened mornings feeling guilty more than once. I mean, what did I do to deserve this gorgeous beauty? Can I repeat this every year?

No, my heart is not the least bit broken. 😉 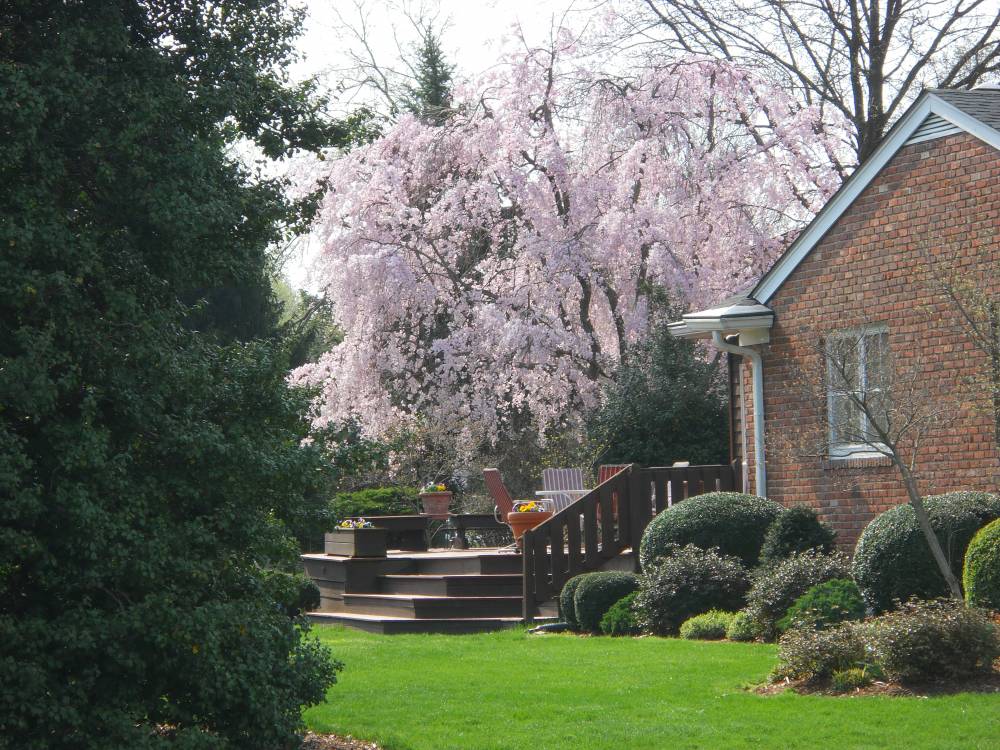 Here in beautiful downtown Douglas Hills, the Louisville suburb I live in, we’ve noticed the fresh young buds of local Dogwood trees strutting their stuff on incredibly aromatic Spring mornings and days, giving us not only the fresh scents of Springtime but the blooming promise of the days and weeks ahead. 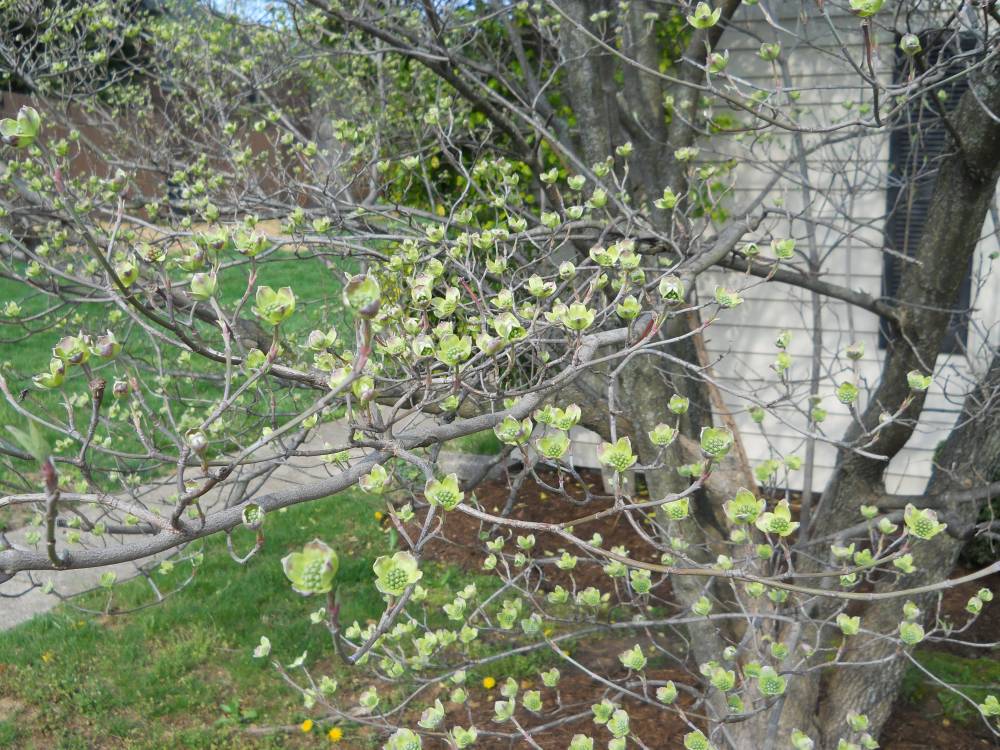 From such humble and rather grinning beginnings, Spring is formed. It will get spectacular in mere days ahead as the days get warm, the muggy but still pure moisture always so present in the air maintaining a freshness one has to experience to believe. 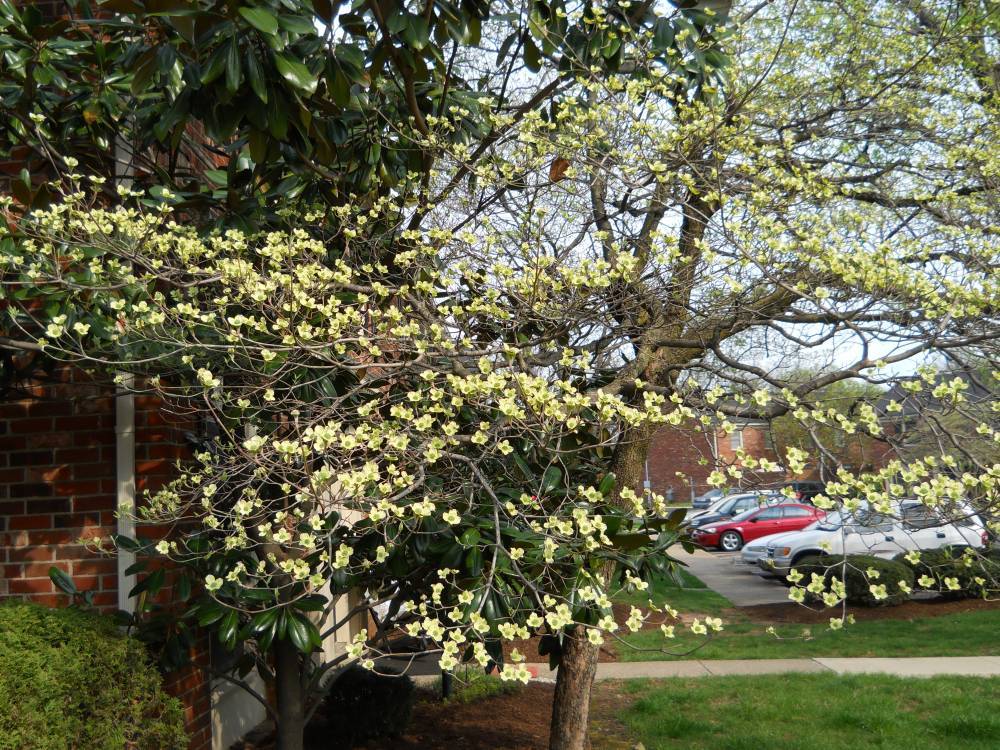 The local Chinese Pear population, in the person of these ‘Chanticleers’, are always early and this year’s mini-heat wave has inspired not only their standard early riotous profusion but also timed so perfectly with all the other buds and blooms. There is a virginal quality to these lime-green urban forests that always seems to leave us in a certain awe of Nature’s possibilities. One must – absolutely must – regard the designs of some of the planners of these parks, boulevards and yards as just fabulously and totally inspired. Designing for Spring is simply the best. 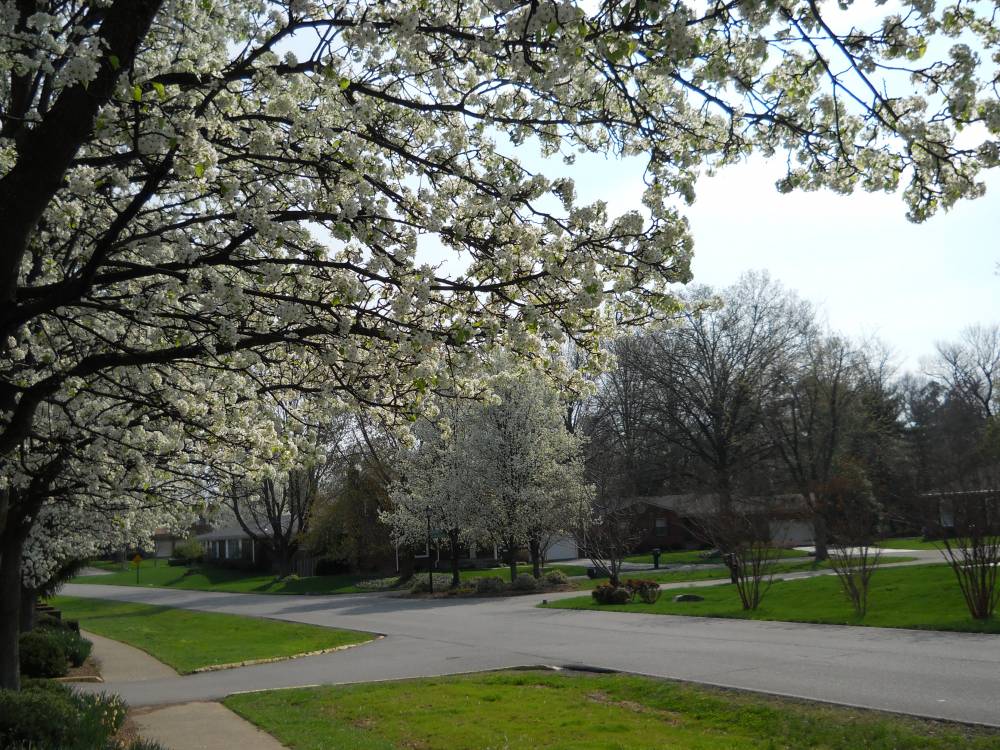 This is a park a person can sink their eyeballs into! 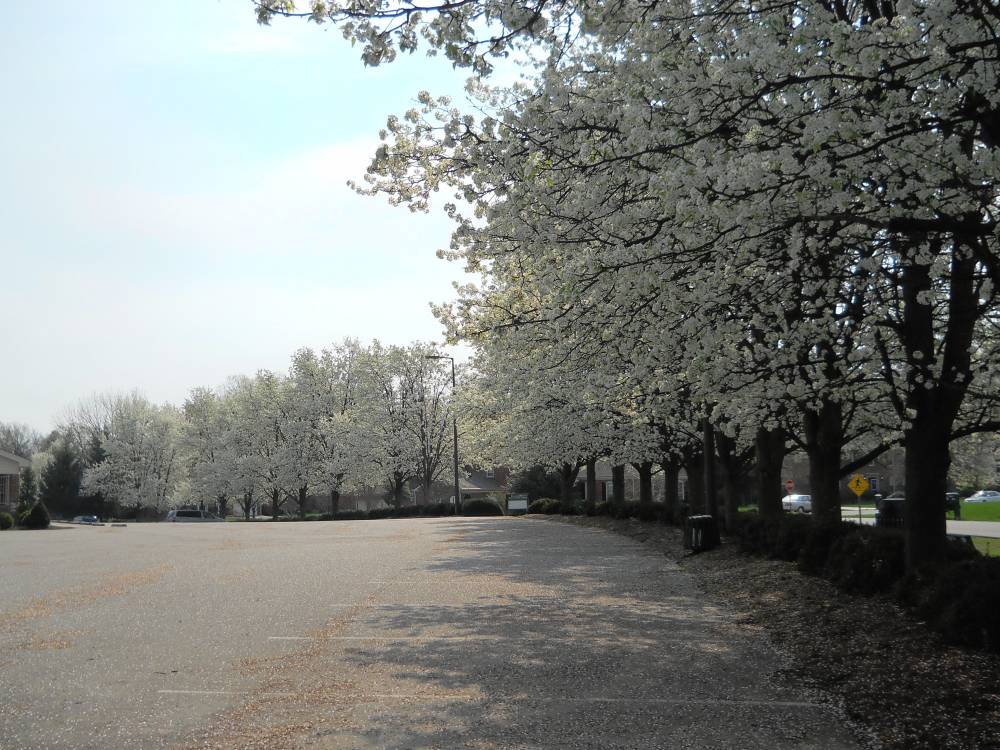 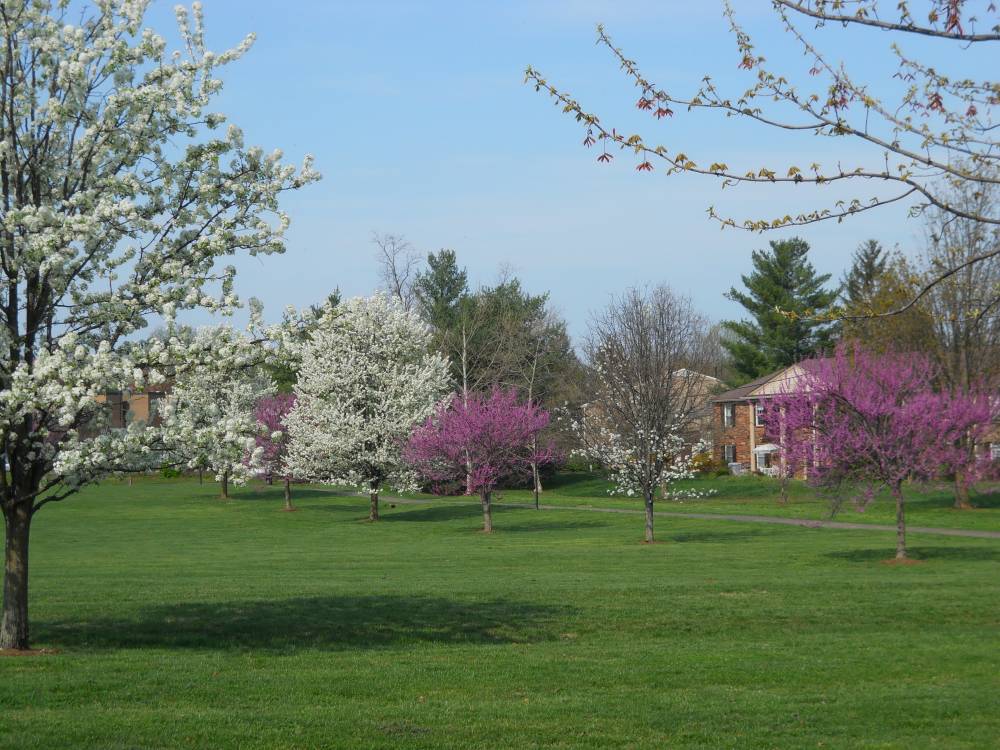 The rich, Fuchsia-colored Redbud trees are another wonder. 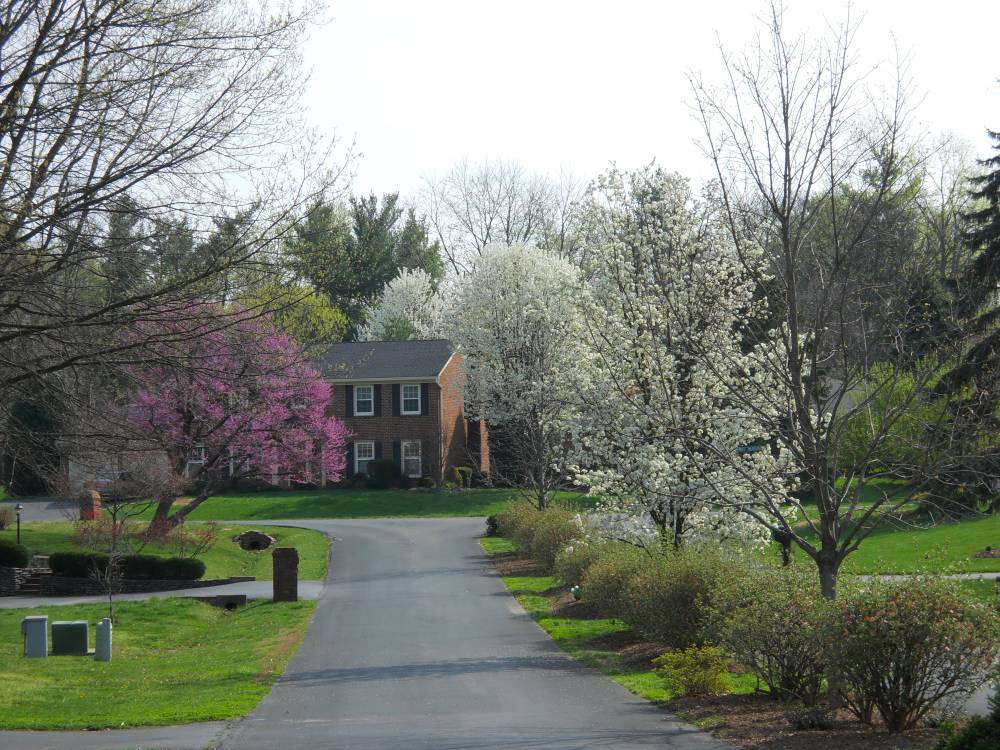 Moving outwards, there is another “tiny matter” worth discussing.

Basketball. The University of Louisville and the University of Kentucky have both earned their way to college basketball’s Ultimate Tournament – ‘The Final Four’, played this year in New Orleans. The eventual winner of two games is crowned Champion, ruling over the entire amateur basketball world.

For those not familiar with the event, it must be said that it is nearly as big as the Super Bowl or – dare I say – the Kentucky Derby in the terms of American interests.

To give an idea of just how basketball-mad Louisville and the entire state is, take a look at how they invest their entertainment dollars. Below is the inside of a Palace – the Yum! Center in downtown Louisville. Only 22,000 Louisvillians can fit inside. 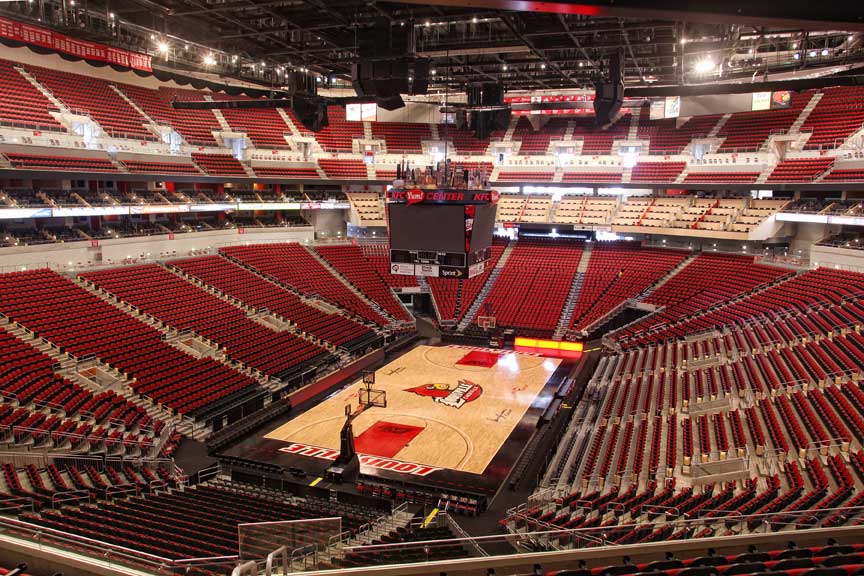 This is not your Grandad’s basketball building. 😉

Confession here: I am a Louisville fan. Pretty much everyone’s head will explode soon enough in this crazy state over an absolutely Tectonic and sweetly serendipitous occurrence, based on real achievement and a couple of groups of “thoroughbreds” which always satisfy Kentuckian’s senses.