This group of nuts is enjoying themselves while their poor hard-working landscapers continue flailing away in the efforts to make them this happy year-round. There were always kids around us during this project and the truth is they made it more fun. Likable and almost always helpful, at worst they did their damage at night after we had left. We knew what we were heading into, however, since most of the guys working with me had kids of their own, as did I. Let me say right now, kids rock. As long as we don’t crush any, they can play along any time. A definite kid-friendly crew there.

This project is stuck back in the Ponderosa Pines along the route between Reno and Lake Tahoe, an upscale neighborhood tucked back into the hills. Relaxed and pretty friendly – with some notable exceptions – the ‘hood was home to bank managers and contractors, architects and doctors who seemingly “arrived” with places like these. At least, that was our purpose as the landscapers – to give a dream home some fleshed-out sensibility. It was a high-budget effort for a contractor who had done very well indeed.

While the above picture shows things upon opening it up – it was the first day of swimming – those below here give a better illustration of what we encountered when the pool work itself was almost complete – done by others – and when we began our own work in more earnest. 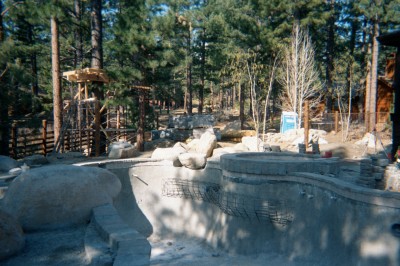 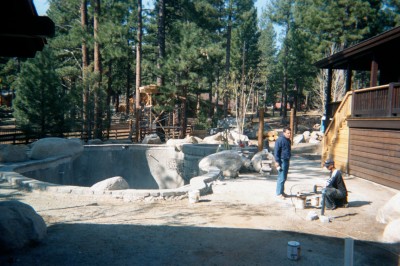 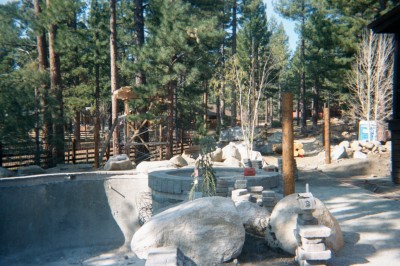 We also had an element complicating matters which showed up at the worst time, lol: 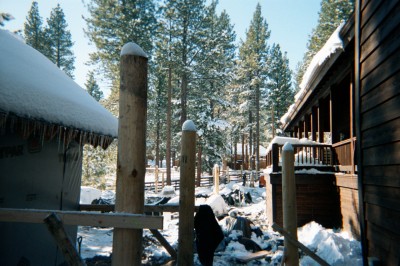 Life at 7,000 feet above sea level! It could snow almost any time, particularly in Spring. The fact was, in Fall, you waited until the first one, then went back to town and forgot about the area for 5 months, barring an unseasonable Winter. Summers, gratefully, the weather could be 5-10 degrees cooler than a hot Reno, Nevada where folks were dealing with 100 degree weather. Add the shade and you have the perfect mid year project.

We had helped at various stages to get the the pool underway, including the initial excavations, using a monster excavator or two. This sucker was going to be 11′ deep at the deep end, owing to the extreme possibility that the “Tree House” being erected would get someone diving in from virtually ‘high dive’ climes.

Looking closely, boulders can been seen strewn around the upper edges of the swimming pool. These were not ‘afterthoughts’ whatsoever. They were obviously always in the plan but they reqired more than just your average “Plop a rock in place” effort. These babies are cemented in place to prevent eventual cracking of the pool by weight and settling. Not only that, but we attached substantial angle iron braces to the boulders themselves as a sort of “staking”, to embed them in the native soil. The ground underneath was compacted thoroughly prior even to that. Thus we had the boulders which were penetrated and secured to the thick angle iron bracing, then set in cement. All this was done prior to the acceptance of the soils by the swimming pool contractor upon commencing his own work. Here’s a reasonable picture of one or two of the granite boulders, weighing in at about 5 tons. The big one there was the largest, weighing in at about 5 tons. This is not your every day pebble! 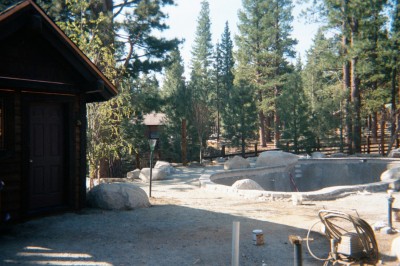 I’ll continue this next time. This, much like the Chinese Garden in Portland, Oregon, remains one of the most challenging and fascinating projects I ever worked on.