What a topic. From my humble enough beginnings as a landscaper in 1970 or so to today, not only has my trade advanced in colder climates from the description as “gardeners” to “landscape professionals” – complete with our own designers and architects advancing to the heart of all contracts and blueprints – but it has also developed technical aspects which make it all so much easier to install.

Naturally, it also saw an increasing complexity of design – “Give an architect an inch and he’ll take a mile!” – 😉  – hence to the notion of “hardscaping” and of all the ramifications inherent in water-related designs. But even there, modern machinery has proven adaptable and up for the changes.

Once there was a time when a pile like this was a day’s labor, delivered and loaded and then unloaded completely by wheelbarrow. I have bummed this picture from Farmer Fred’s excellent website because it rings so factually with my years of reality “on the ground”:

Lately – within the last 15 years, a yet-new technology has burst from the brain pans of those seeking labor-savings in our trade. It all revolves around the same pumping principle as vacuum cleaners except for one thing – the flow is reversible. This is what 100 yards of bark mulch can look like going in now, from a business in British Columbia: 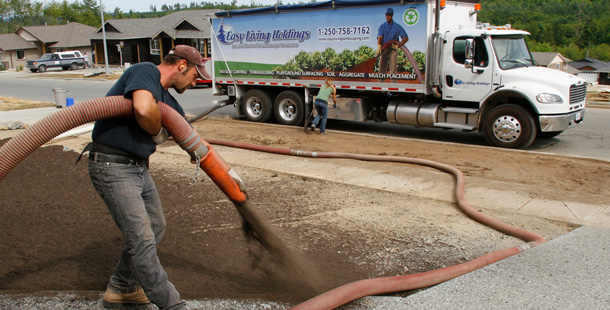 At one time in the distant past it took 2 guys 3 days to load in this much (80-100 yards) of bark. And that was some fierce slogging, up grades and sidewalks, if hilly, and handling wet material, if rainy. To say this method is superior is today’s best joke. There is obviously no comparison.

Let’s have a look at things like dirt, shall we?

Which way is better? This one, loading each wheelbarrow by hand, then trooping up 50 feet of elevation? 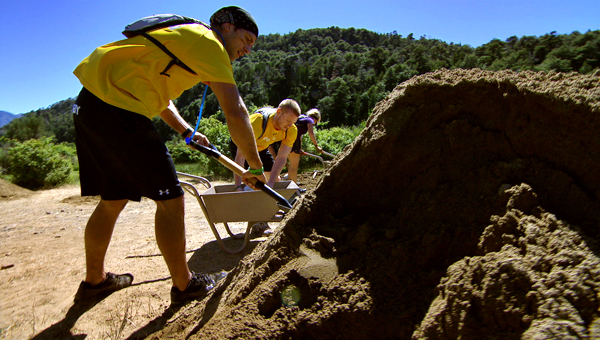 Or this one, with a cup of coffee in hand? 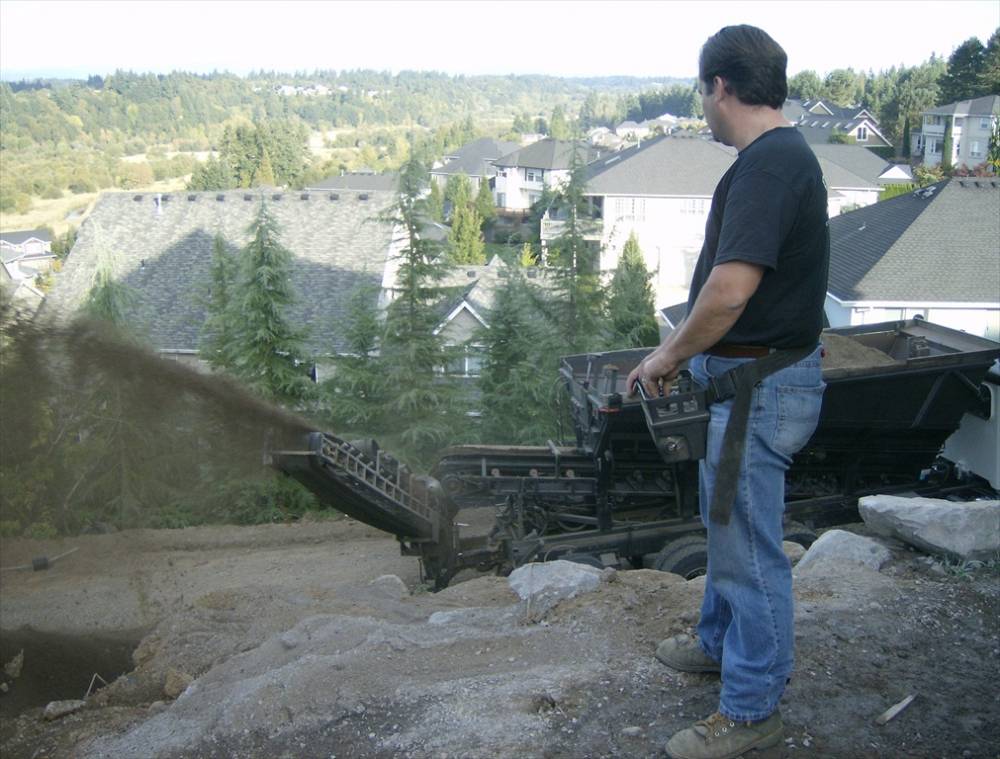 These are not trick questions. Homeowners as well can pay strict attention to many of these developments with an eye towards their own needs. These technologies are not exclusive to landscapers whatsoever. The “thrower” above, for example, can also toss rocks, from pea gravel to drain rock, and even have them reasonably aimed to fall very much into the correct place. The mechanism in the driver’s hands above is amazingly useful, aiming the mechanism to wherever desired.

Who among us is familiar with the term “Dingo”? (No, not the Australian dog). “Dingo”, like “Weedeater” was the brand name of a product which has since evolved into 100 other names and concepts.

These machines are one man tractors – able to climb impossible grades and to squeeze into what were once impossible enclosures – such as 3 foot gates. Imagine matching the productivity of this: 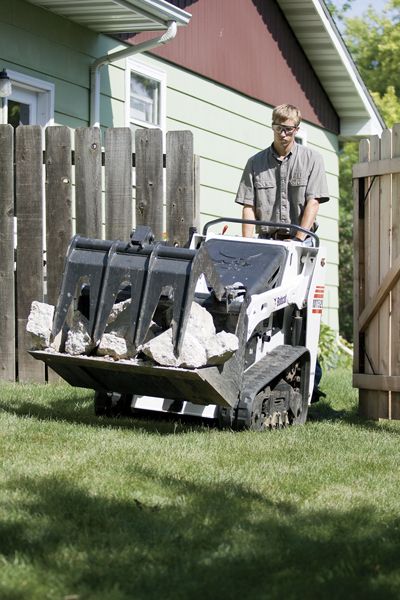 Naturally, the discovery of the “Bobcat” – also the original name of a machine now sold by absolutely every major machine dealer and now more often referred to as a “skid steer” vehicle – was epic. Small enough in size for a 3/4 Ton truck to haul around, the productivity output in terms of moving materials around is literally off the charts.

Useful beyond measure, one can attach any number of helpful hydraulic tools to this machine, from Boring Implements for digging plant holes to forks for moving brick pavers or large humongous trees around. 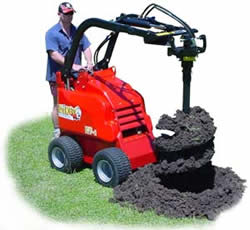 Nearly as impressive are the modern sized excavators- some incredibly tiny but equally useful – whose uses are nearly as numerous and which vie with Bobcats for “must-purchase” items for any beginning landscaping business: 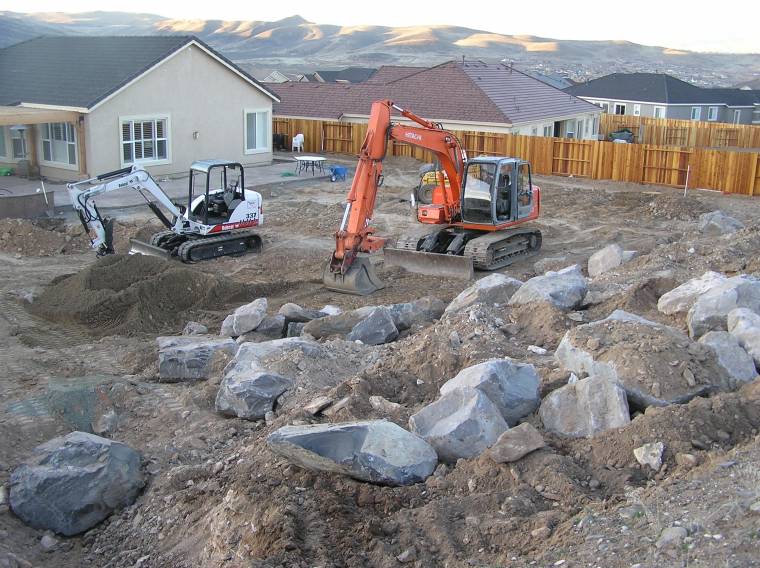 Their uses are numerous and efficient. For the record, yes, that is me riding this beast and, 2, that is a 700 Pound rock, cored through the middle for use as a Bubble Rock:: 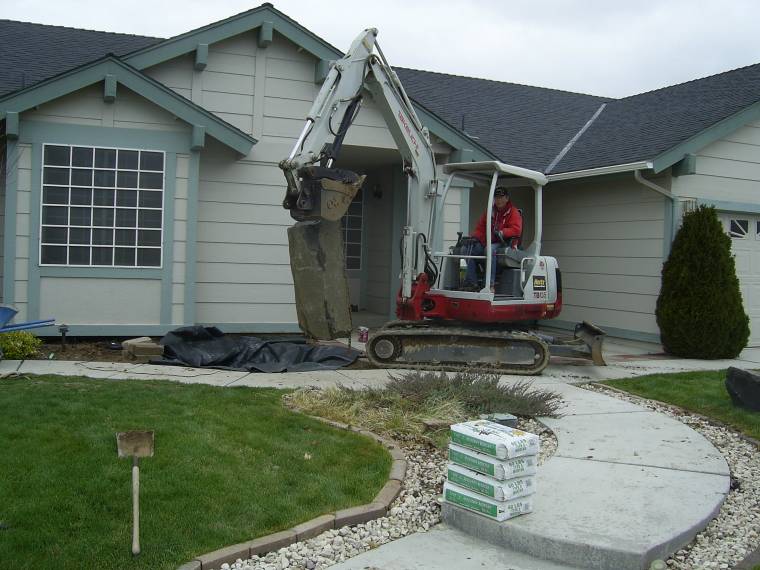 Once referred to as a “Raimey”, a machine sporting the “Knuckling Hydraulics” of this unit below became a wall-builder’s dream. Complete with essentially 360 degrees of rotation, nothing in the world is quite as efficient at placing large boulders into retaining wall structures: 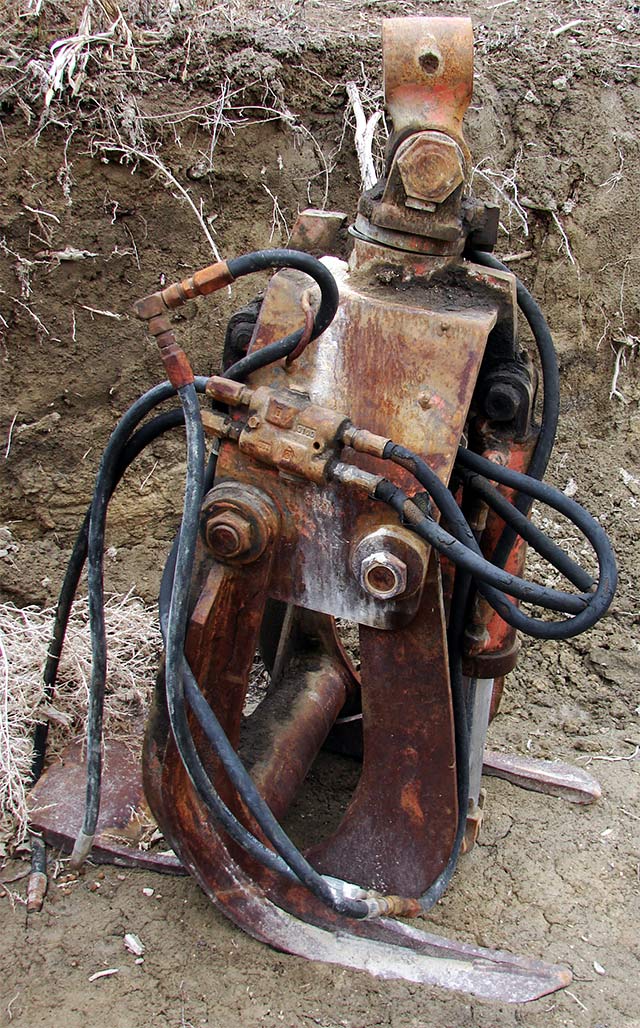 Here is a look at “our version” of this cool implement: 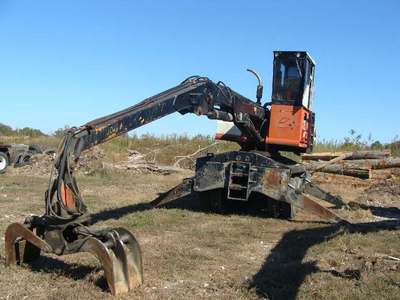 The incredible explosion of modern technologies in dealing with landscaping products and materials goes further, as well. Here, below, are just a few items which makes what was once darn near impossible, possible.

This crane is what we used to place plants at the Portland, Oregon Chinese garden, as well as loading in monster buckets full of top soil. It is 180 tons – the largest crane drivable on city roads and it only required one setting to do its work over an entire city block. 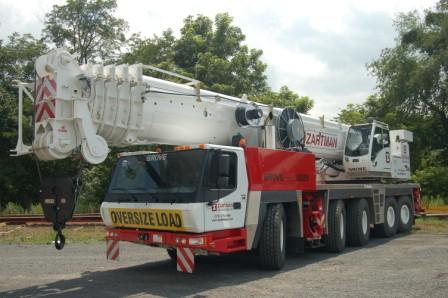 Indeed, this may have been its only competition: 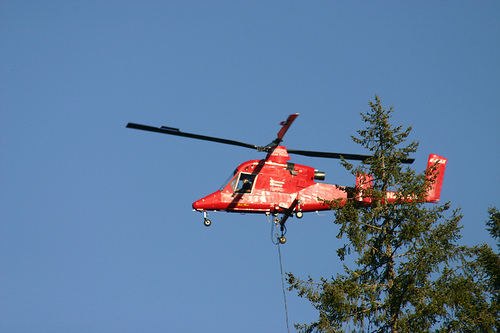 And, yes, we have used choppers. 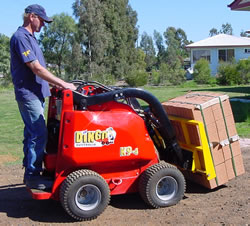 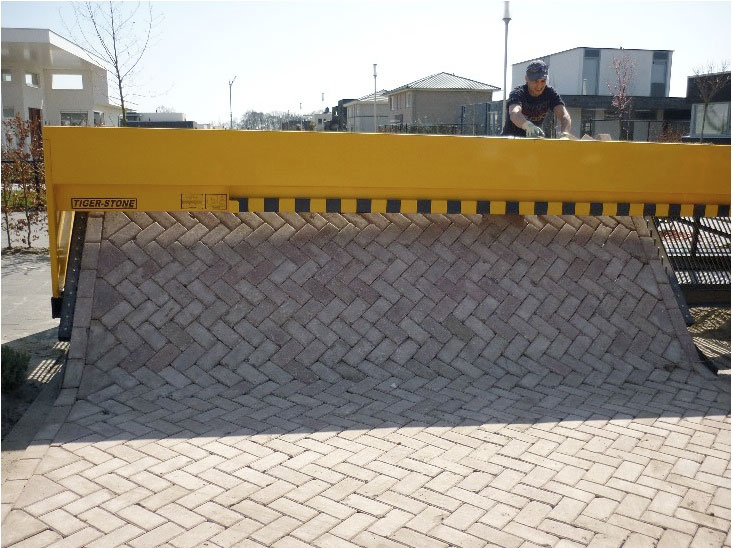 6 thoughts on “Landscaping Machinery – The Latest”