At times, terrain determines style – that, the surrounding flora (if any) and of course, the geology. There are some typical arrangements in given situations, depending on other factors like budgets and neighborhood HOA restraints. But there are wide possibilities out there for designers and homeowners to work within given parameters and to still create interesting environments. One can take the flattest land and bring in a mountain, for example, like this example: 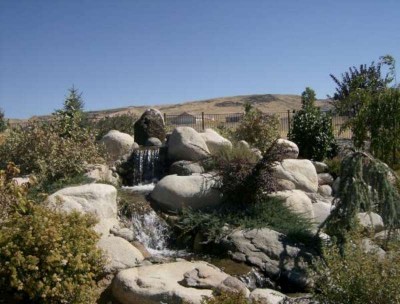 Conversely, one can simply use the hillsides bordering a property to produce a similar effect: 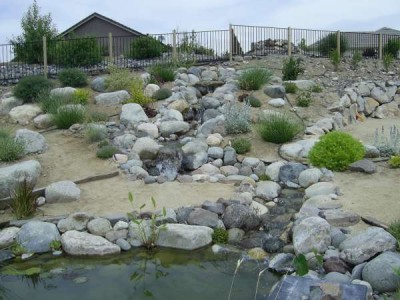 Flat does not have to be boring, for that matter: 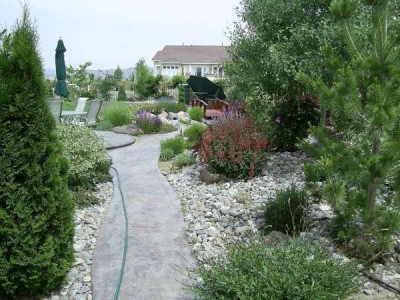 One can even take a nasty drainage problem, such as the next two pictures, and just plain old make a swamp. This “bog gardening” is something I have done a few times and it has taught me which plants can thrive in such an environment. Some simply won’t grow in other environments and some very exotic bamboo’s, among other things, love bog conditions – almost too much so:

But for sheer floral beauty and a wide arrangement of different colored blooms at different times of the year, it is difficult to match what a good bog garden can supply.

From bogs to desert mountainsides where creeks materialize from hill tops or simply meander slowly by the plants and other features of a landscape, all is possible. Landscaping is limited pretty much by imagination, in the end. We have gone into many people’s lots with the barest of plans. It’s pretty wild when that happens and I don’t recommend it as a constant tactic.

But so often general tactics get discussed at night over the phone or on site, with input and ideas going back and forth and some true excitement emerging on all sides. It’s unorthodox, but I ran things like that as often as not. There is much to be said for having someone who you can talk with and who you find yourself willing to work with. Our very best projects came from both sides, your bottom line. Landscapers have ideas and resources people don’t even dream of. But that’s what they do, that’s their career.

Why, heck, we can even supply the same seats Fred and Wilma Flintstone used on their outings! Check these out! 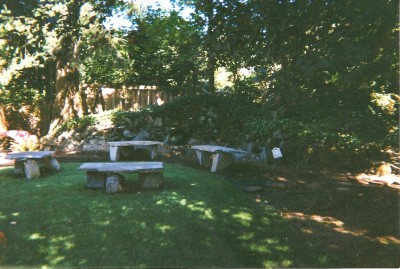 These are actually pretty darn nice. They stay warm from the sun well into evenings and make a definite sweet spot to sit on as the evening chill arrives.