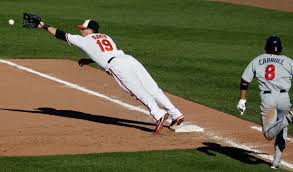 I spent time away from the process of making the “book” owing to a wide number of impactful interferences including my own and my family’s health. It hurt the momentum I had acquired back in the Summer and Fall and has lasted until recently. I hate that it reflects tendencies of my own which have always plagued me to various degrees. I have always been a far better “starter” than “finisher”, no doubt an attribute of my own case of ADHD.

But be that as it may, I have now burst back into enthusiasm in different ways. While still searching for facts involving the drudgery of researching newspaper archives, I have recently begun addressing another request or 2 of Jack’s which we discussed: namely what he looks for in terms of a prospect’s characteristics regarding positions.

And since this is a highly personal blog, where I can indulge the silliest and most indulgent fantasies because I own the darn thing, I have decided to share my own concept of what Jack and I spoke of regarding each position in baseball.

This, then, is what I came up with – today the first baseman. With a philosphical diversion to begin with, naturally.

Anointing physical and even mental characteristics to baseball positions is hardly new. In general, we collect most of our information by watching the games and we draw our own conclusions. This is not like reinventing the wheel. Lord knows, baseball has been analyzed to such an extent that analyzers now analyze other analyzers’ analyses in their own world of Moneyball, Bill James abstracts, charts, graphs and modes of talent and performance productions much the same as market deductions performed by massive corporations based on data the size of Mars.

Jack felt a need to express his thoughts about baseball positions and the attributes contributing to them because he originally thought they might help me sell a book. “It will help Moms and Dads with some basic stuff, Steve.” This was his overall, bottom line philosophy on the matter. Personally, to be honest, I didn’t really care. My thoughts about selling a book mattered less at the time we developed this. I was actually simply attempting what seemed an intimidating project. But Jack has ironically always been the secret businessman to his very soul. Honestly, I can say that my interest was rather pure. It  has always been about getting it right and doing it fairly and Jack’s perspectives are the breath of knowledge and experience.

And, the truth is, in sports, we omit so very much from all these factors in the end, as relevant and unavoidable as they may be. For one thing exceptions to all the rules just spank us on a daily basis. They beat us about the head and shoulders. For example, in every single sport, the single most truly fascinating aspect of the sport – bar none – is what produces a champion. From College Basketball’s Final Four to the World Series, the Super Bowl, the NBA Playoffs and the World Cup, the primacy of one team determines a sole victor.

There has been nothing concluded by acclamation about who that will be – in any year, in any world we know of. We certainly understand favorites like we are apprenticing Las Vegas bookies. We even – and maybe more importantly – cultivate our intuitions, drawing our own conclusions most privately by our own devices based on training habits, coaching propensities, talent and the maturation of teams. playing like winning teams play. Some of us know the players, some know the coaches.

But when the game commences and we put bodies into the field of competition, suddenly all the analyses in the world matter less than a player’s nerve and his urge to compete and win. At varying levels of competition, the devotion increases as the players’ skill levels, size and appreciation of the nuances of the game increase. Kids who love the sport become realistic through some occasional unfair meeting with nasty reality and then some kids move on by being selected as more promising, with more skills. They then become young men of incredible talent and accomplishment and then they become world class. This is the typical route of athletic development. No one re-enters sports after “some time off”. It is almost always a one way journey.

I feel this philosophical aside matters in an assessment of what most traditional baseball minds agree are the prevailing traits of ball players by position. I mention it all because the exceptions to the rules abound. Indeed, it could be said, in many ways they make it even more worthwhile.

Of course, we also need places to safely stash all the left handed people in the world. Everyone know there’s something wrong with those guys. Baseball is very kind that way. In fact, in some cases, changing people to exceptional behavior – such as switch hitting – improves their prospects and, as a result, their own teams’ prospects. Then they strike out.

Or you could be like Frankie Chambers and hit a home run the first time you ever try switch-hitting.

So here is a journey through what baseball as an institution thinks about positional players and the primary attributes they need to succeed. As well, we will take a look at some of the demands of the positions in ways that might be of interest.

The primary need of any first baseman, regardless of their size or which hand they catch and throw with is the ability to catch the ball. First basemen experience a wide range of throws coming their ways, from perfect and satisfying to absolutely dreadful curving, deceitful shots that can easily bounce off the ground into Lord knows what direction, usually smack onto one’s own body. Over time, first basemen develop their own relationships with the guys who throw to them. A shortstop who has the longest throw in the infield usually presents the biggest challenge to a first baseman owing to the amount of changing in a baseball’s flight which is always possible. Needless to say, the perfect throws would be straight as an arrow and right at the chest of our hero, in time to nip the runner in an orderly, timely fashion. That is the first baseman’s perfect world.

Well, this does not always happen. And sometimes, guys hit balls your way.

Aside from challenges made by impressive athletic plays which compromise the perfect throwing position for another infielder, there is always and forever the outlier of the simple “bad throw”. 70% or more of these are either wide of the mark, requiring a nimble tracking down and return to the base or else those which are thrown too low. “Too low” is a rather diabolical condition since it means the ball will land on the ground in front of the target. Inasmuch as soft dirt can contain tiny potholes made from spikes, footprints or natural deformities in the ground, the trajectory of these throws challenges a first baseman to do everything possible to scoop it up in total possession or else, at worst, to keep this throw in the region thereby not allowing base runners to advance. The remaining 20% of bad throws are simply too high to catch or so wild they require chasing them down. These are “really bad throws”. 😉

The answer to the personal question on your mind is “Yes”.I have broken parked car windshields. My own Dad’s for example. Life for a shortstop is a diverse experience, a subject we will approach just a bit later.

So catching the ball is foremost. While relationships with wild-throwing shortstops can be challenging, make no mistake – the first baseman can be his best friend. First basemen have performed remarkable peace-keeping saves in their careers and saved thousands from untold embarrassment..I have personally blown many kisses across the diamond in secret. Hundreds, even.

Drills for first basemen always and forever will include bruising experiences with purposefully intended bad throws. And well they should. Young guys need to develop reflexes and strategies of their own for dealing with the terrible and awesome disease of bad throwing because it is merely something one can absolutely count on. There are 5 players who count on him for help, including pitchers and catchers. Make no mistake that players who have confidence in their first basemen, play better and make a larger number of remarkable plays. A first baseman with catching issues can equally ruin the confidence of those whose mandate is to make the routine plays.