In late May of 1966, Owensboro Senior High School hooked up with a crackerjack Shelby County team in the semifinals of the Kentucky Boys State Baseball Tournament for what would end up being One For The Ages. It remains legendary for me and those who participated – as well as establishing various still-unbroken records, now some 50 years later. One would have to believe that, having won the State just 2 years prior, in 1964, Owensboro would be rated as a slight favorite. We had two absolute Ace pitchers in Wayne Greenwell and Danny Howes, each of which had ERA’s one needed an electron microscope to find, each under 1.00. Each had improved their games from “already very good”, to plain dominant.

In our first game, we played perennial competitor and tournament rival Paducah Tilghman and beat them 1-0 behind a perfectly awesome pitching performance by Danny. The ballgame had the standard key moments but, in the last analysis, it was a game for pitchers who grossly over-matched hitters on both teams. For ball players, these games have their own elements of fascination. Like Major League baseball’s World Series or Playoffs, every single pitch thrown is an epic story. Moments of pressure are completely constant. It is a game of nerves.

I recall a beautiful late Spring Kentucky day, a bit warm but sunny with little if any wind. To call it “baseball weather” would be insulting to the Perfection of the day. Played at the University of Kentucky’s home field in Lexington, the field itself was especially well-groomed and, for an infielder such as myself, very true, at least during early innings until the dirt got chewed up a bit by the spikes worn by base runners and crossed by players entering and exiting during inning changes. Predictable ground balls are an infielder’s dream, while the sordid realities of bad bounces plague a shortstop’s night dreams like a platoon of Steven King clowns.

Shelby County had won the state basketball championship that season, just a few months earlier. Featuring future college All American, Mike Casey, who played shortstop they also had speedster Bill Busey and Ron Ritter, a hulking big sucker who could throw BB’s. Inasmuch as Ritter had won their first ballgame, they went with lefty Tom Hayden for a while.

As soon as the game got underway, there was action. Busey was the ballgame’s second batter and he hit an impossibly hot, worm-burning ground ball by our third baseman, down the line almost immediately into foul territory and which diabolically kept rolling, even beyond the fence which ended around 5 feet to the left of the line. Well, the ball was ruled “in play” even beyond the fence, a curious and unique local rule we were not familiar with and which Jack admitted he felt guilty for not advising us of. Our left fielder, Landy Lawrence temporarily gave up on chasing it down until Jack began screaming from our dugout to pursue and play it. By the time he corralled it relayed the ball to me and I threw it home, Busey easily slid under the tag for the first run of the game, now 4 minutes old. It was frankly bizarre and just a singularly freaky score. But it sure would matter.

In our next at bats, I led off with a sharply hit single to left. I had learned to steal bases, having found more speed than ever my senior year and gauging pitcher tendencies to an extent that I was about 95% successful on my steals during the season. I think I was thrown out once and even then, it was because a second baseman literally blocked the base. That I “got even” later is another story.

So I stole second base early on in the count. With the lefty on the mound, I had always found it incredibly easier to swipe third base. Plus, many pitchers were simply not accustomed to players stealing third. I went ahead and did so right away, so we had the tying run in position right away. This would happen 2 more times. I got on base 2 times more by the 5th inning, stole second and/or third and waited there – for “Godot”. I never scored.

I remember being on second base after one of the steals glancing at Casey at shortstop who was smiling as if he had some hidden joke. It caught my eye.

“Next pitch,” I smiled back. He laughed hard. I took off and made it. I looked back with a grin and he pointed at me. I think he swore, but I can’t be sure. (We met after the game and exchanged laughs and family introductions. Mike was a good guy.)

Meanwhile, both pitchers were excellent. While we hit their lefty hard, we could not group any hits together enough to even score a run until, finally, Greenwell hit a towering shot with a runner on second that bounced over the fence, 380 feet away. Alas, we had finally broken through and scored the tying run. But, with that blast, Wayne caused a pitching change, bringing the hard-throwing Ritter in who caused us no end of tribulation. He shut us down that inning – he shut me down for the rest of the game – and produced very little room for optimism. He was throwing aspirin tablets up there.

We continued on past the regulation distance of 7 innings with neither pitcher yielding anything whatsoever. Wayne was simply nasty, but so was Ritter. Each potential threat was usually disposed of with strike outs, in fact.

In the 17th, Casey hit this diabolical blooper between me and center-fielder Billy Wellman. We collided, grotesquely – the hardest “hit” I’d ever felt in baseball –  a total surprise –  and my worst collision ever. I had the ball in my glove but the collision jarred it loose and Casey ended up with a double. A sacrifice bunt on their part later which led to a bobble, then an uncharacteristically bad throw by Bobby Hupp, plated a run and they scored again on another error – we blinked first.  Speaking of my experience of tight games, these were games which we typically won. We had so often waited for another team to break. This time it was us. Jack;s comment after the game: “We usually win games like this, but this one was not in the cards.”

5 and a half hours after the first pitch, we departed the field darn near in tears.

We mounted a tiny rally in the bottom of the 17th with Tommy Jones getting a hit but Ritter did his work and struck the last 2 players out. Our deflation was total. It was an empty sensation, especially in view of what Greenwell had accomplished on a strictly individual basis.

In my lexicon of Impressive Baseball Accomplishments, I’m not sure anyone will ever top what Wayne did that game. He must have thrown 200 pitches, for one thing. But of primary interest is the fact that he struck out 27 batters in a State Championship ball game.

(Actually, Owensboro has had a pitcher strike out more in one game, believe it or not, and it also came with Jack as head coach. Bobby Woodward once struck out 31 batters against Greenville in a massively ridiculous game where the opposing pitcher and a future Major Leaguer struck out 23 himself. It was a 14 inning game.)

The Shelby County game was the longest game – still – in Kentucky High School State Tournament History. The strikeout total is so overwhelmingly record-setting, there is no one close for second place. These days of 100 pitch limits so fashionable in the modern game, Wayne would have been gone in the 7th inning. I mean, 27 strikeouts is 81 pitches all alone!

The defeat was a bitter pill. Exhausted, Shelby County was beaten by Ashland in the Finals.

It’s somewhat ironic that the most iconic game I ever played in was a loss. The elements which took us so far over so many long years all played into the fact that we were there – vying for a State Championship at the highest levels – and with the amazing performance by Wayne Greenwell on a strictly individual basis which we now get to tell our grandkids about. 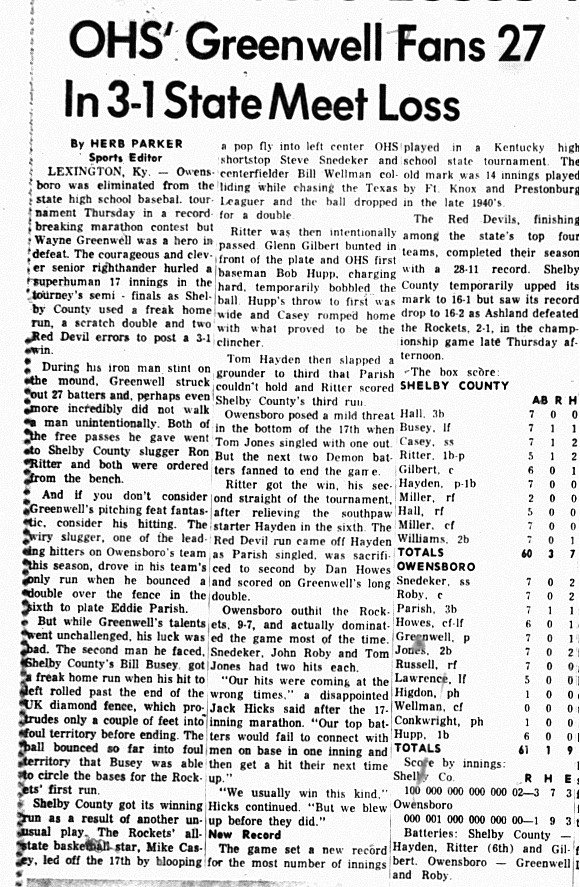