In 1953, while still working as manager of the Sportscenter in Owensboro, Jack was asked by Jake Winkler to take over coaching the Owenboro American Legion ball club. Armed with a desire to stay in sports at an active level and in spite of having already given up teaching and coaching in West Louisville and Beech Grove by taking on the managing of the successful new Owensboro Sportscenter, Jack decided he very much liked the idea. He reasoned correctly that he had ample time to do so and Jake insisted that they were also in dire need of a coach. Much like taking over the coaching reins of the Owensboro Little League All Stars in 1952, this gave Jack his own personal field of dreams in the sport he loved most.

The team had never really been hugely successful. In fact, the few successful seasons they had produced records just a bit over .500 and were generally poorly-attended. Naturally, the Class D Kitty league Owensboro Oilers were also playing locally, but this was different. This was a league involving 15-18 year old high school aged kids who had no other outlets for baseball. “Legion Ball” was a ferociously competitive division of baseball played at a high level for long years, elsewhere. Jack also saw the potential of being able to coach a group consisting of the best the local and even neighboring counties’ players.

Calling themselves the Holder Ideal Kids, (and pre-dating the “Velvet Bombers”) they commenced the season rather well, compiling a 13-4 record over the course of the season. Jake, whose commitment to the James L. Yates American Legion Post 9 fortunes of its baseball sideline was always total and enthusiastic for the many long years he ran the operation, was enormously pleased with their progress. A hands-off General Manager, Jake suspected he had something special going and he was eventually proven correct. 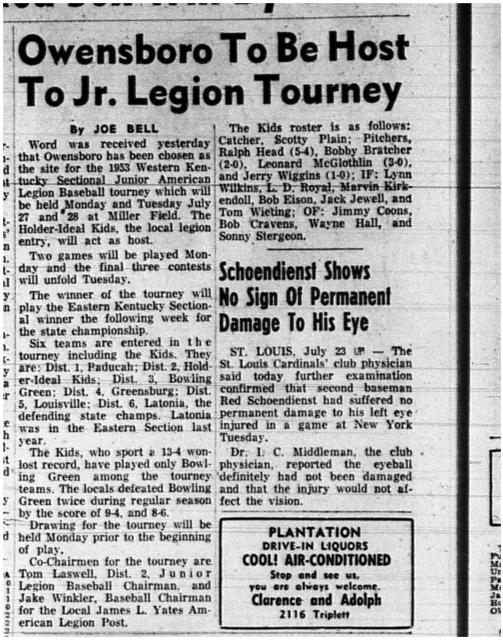 Awarded the home field for the Western Sectional of the Kentucky State Championships at Miller Field in Owensboro, the local boys won the tournament, then played the Eastern Representative and won that as well. Jake was beside himself as Jack and the very under rated team won the first of an eventual 11 State Championships under Jack over the next 25 years. As Jack says, “Jake wanted to buy me a car!”.

The team consisted of catcher Scotty Plain, pitchers Ralph Head, Leonard McGlothlin, Bobby bratcher and Jerry Wiggins. The infield was Lynn Wilkins, L.D. Royal, Marvin Kirkendoll, Bob Elson, Jack Jewell and Tom Wieting. Outfielders were Jimmy Coons, Bob Cravens, Wayne hall and Sonny Sturgeon. The team went to North Carolina for the Regionals and lost two games in a competition they found they had much to learn from. It set the stage for some serious development.

It was an enormous development for the sport of youth baseball in Owensboro. The statement “Winning cures all ills” was never more prominent as the team collected more fans and more interest among players. Owensboro slowly but surely became an absolute state power in American Legion baseball as time went along, but this season was the watermark of change. The success of this Legion team also grabbed the attention of others within the larger interstate region as time bore on, allowing the schedule to become far less “provincial” enabling competitions, hosting new faces and travel to teams from Memphis, Evansville, St. Louis, Nashville and other more exotic destinations. American Legion baseball in Owensboro had “arrived”. When many people talked Owensboro, now talk often drifted to baseball. This would only magnify as time went by.